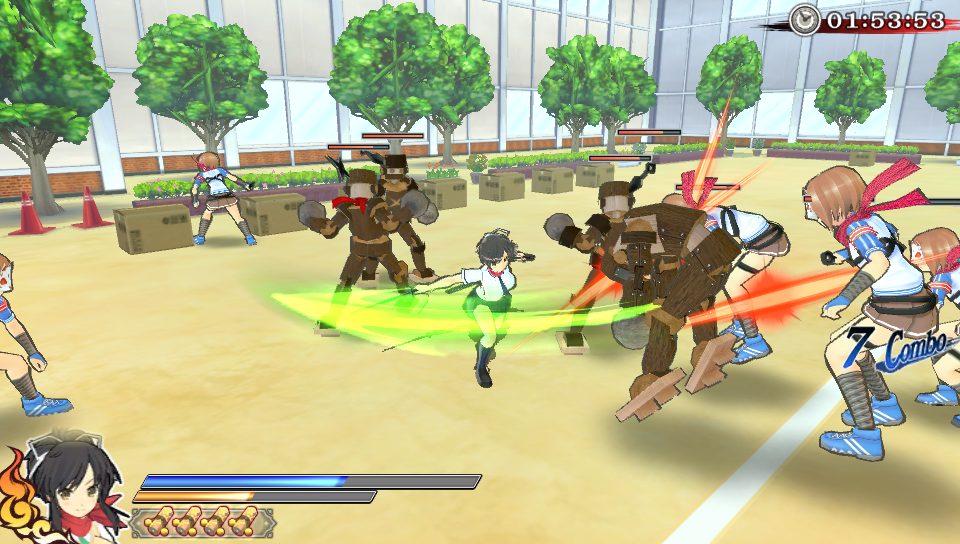 First things first, Senran Kagura Shinovi Versus has boobs.  Lots of boobs.  It was originally released in Japan in early 2013, and became such a fan favourite that it was inevitable it would find its way over to our shores.   It may have taken almost two years to reach here but now we can finally see if it’s any good.

As an arena fighting game it focuses around the conflicts between four super secret all-girl shinobi schools.  An anime quality introduction movie introduces the schools to you, of which three are initially playable with the fourth unlocked along the way.  Fans of the 3DS game will also recognise two of the schools here, with the story set after that game.  As Japanese as it comes, this game is notorious for it’s over the top stylisation of the girls’ jiggly boobs and for the fact your can strip your opponents clothes as you defeat them.

Each girl has a different background which is taken from genre staples such as the shy girl, the cute one or the feisty leader.  Their individual stories are fleshed out through the dialogue between levels.  This is played out as either text based stories on screen you’ll need to scroll through, sometimes lasting over five minutes, or as talking head style encounters which still carry lots of text.  These background stories form a central part of the game and will be instrumental in your enjoyment of it. 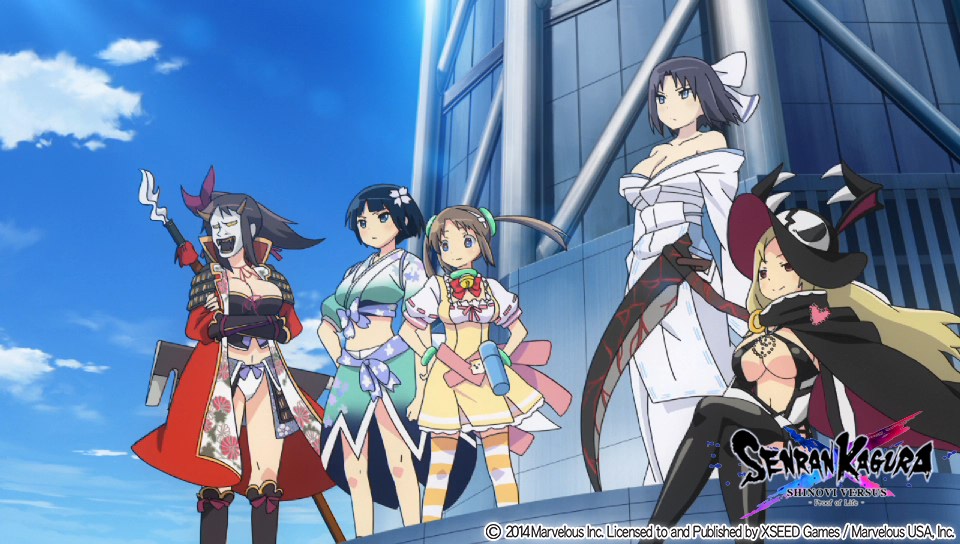 The combat is based around an elegant system using strong hit, weak hit, dash and jump.  By combining these you get to chain attacks together and should you rack up a decent string of attacks you knock your opponent into the air and can then Air Rave them, which essentially means hitting them some more while you’re both in the air.  Each girl uses a different fighting style including blades, staffs, guns and fists.  Each girl fights very different, and you’ll soon have your favourite one.  Additionally each girl has three unique Shinobi Techniques which must be powered up first by stringing hits together.   As your girls level up you unlock new skills allowing for longer and more devastating combos.

The battles you engage in are fast and frenetic, sometimes to their own detriment as it can get difficult to follow what’s going on.  There is a lock on which helps alleviate this confusion; however you will still find yourself fighting an errant camera now and again.  Some of the graphical tricks are nice with lighting effects showing when combos or air raves are used.  The game also switches to a close up for each transformation or shinobi technique used, ensuring you get a decent eyeful of your girl as she shakes off her clothes.  Overall the graphics are of a very high standard and will show of the gorgeous Vita screen. 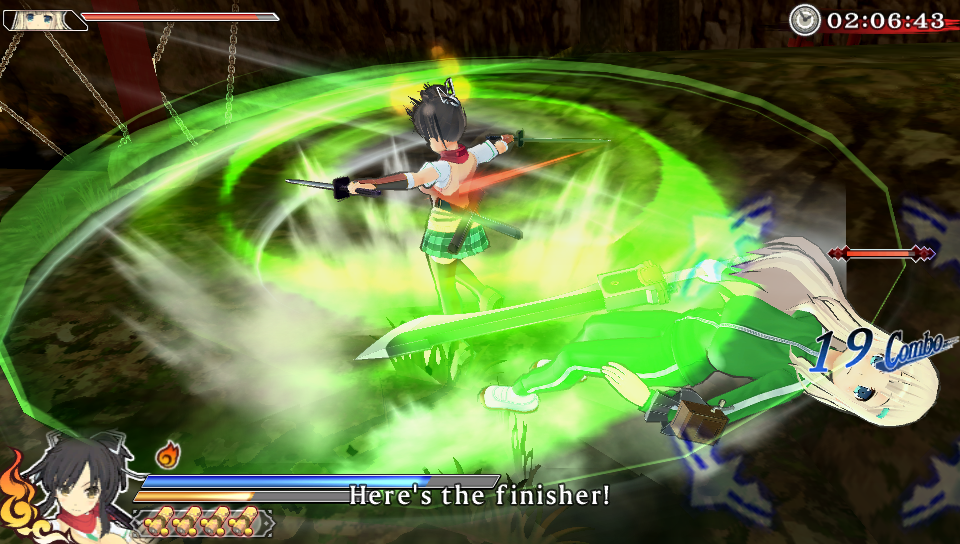 There is also an RPG element here as you can level up across three disciplines, Flash, Yin and Yang dependant on what your girl is wearing.  When each battle starts you’ll be wearing your school uniform, think St Trinians but taken up a notch, and fighting in this this you will level up your Flash skill, allowing for better guarding and increased exp.  If you opt to transform into your Shinobi outfit, effectively changing into battle clothes, you level up your Yang which gives up better attack and possible health recovery.  Finally if you chose to strip into your underwear, done by dragging your fingers apart across the touchscreen, you gain a dramatic increase to your speed and attack but at a comparable drop to your defence.

Regardless of what you wear as you fight you take damage to your clothing, eventually your clothes can fly clean off and you’ll be left in your carefully chosen underwear.  Should your opponent use a Shinobi technique on you at this stage you’ll be left starkers, with only a ray of light protecting your modesty.  Honestly though sometimes the ray of light actually covers more than some of the underwear you can purchase.

This game has a decent online aspect too, with either adhoc or online games.  There are some nice battle modes, ranging from the more standard points affair through to a mode which sees you collecting knickers as they fall from the sky.  It’s all handled very well and the choice to fill your game with bots ensures you can always get a game going.

Outside of the fighting you’ll find yourself in the common room your chosen school, which acts as a hub to the game.  In here the girls like to hang out and can be chatted to between missions, providing little snippets of thoughts or comments on the missions.  You can also go shopping here to buy new outfits and underwear or even take part in the lingerie lottery.  Winning the lottery unlocks one of over 100 pairs of underwear, from sensible shorts all the way to C-Strings.   You can try your purchases on in the dressing room and save your favourite outfits for later, or to quickly apply to the other girls. 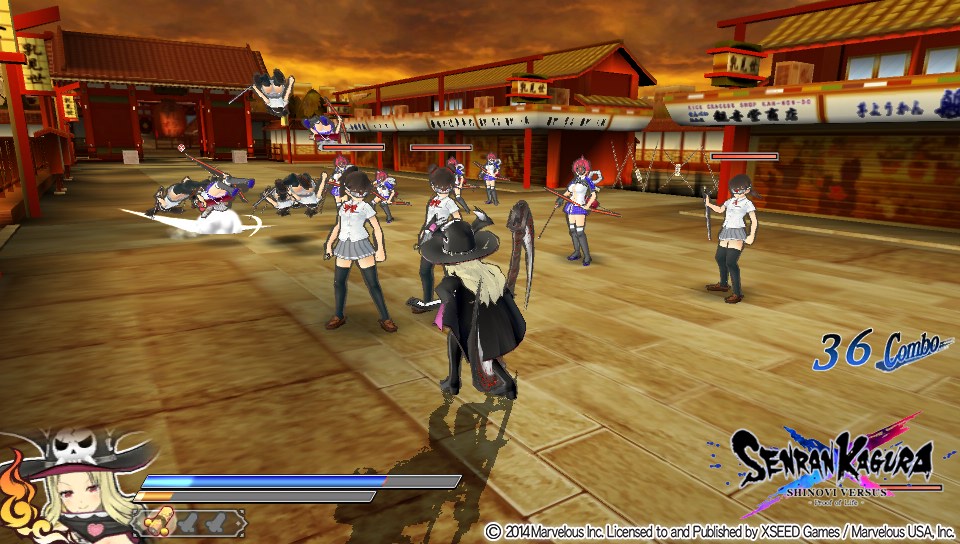 The dressing room forms a major part of this game and you’ll find yourself spending far too long in here changing the three outfits of your girls, school, shinobi and underwear.  You can also add accessories and change the positioning of these, and alter your girls’ hair style.  The scope and scale of the clothes on offer is staggering and once you’ve chosen your clothes you can tilt your Vita vertical and look at girl full screen.  In this mode you can interact by touching, flicking and speaking.  Also by using both touch screens and rubbing your fingers up and down you can inflict clothing damage to your girl, the movement your hand make in doing so is more than a little suggestive.
.
Overall then this offers a decent, if not stellar, fighting game.  But viewing this game on its fighting alone would be missing the point, this game sells itself through the sexy girls.  The reams of text and background on your girls really add individual character to your girls, and a lot of time has gone into this.  To judge this game fully you need to consider the fun found both seeing your girls fight in, and lose, the clothes you’ve chosen.  If you are embarrassed by the thought of seeing computer girls fighting in their undies then this game is probably not for you.

Summary
Overall then this offers a decent, if not stellar, fighting game with loads of fan service thrown in.  The reams of text and background on your girls really add individual character to the game.  If you are embarrassed by the thought of seeing computer girls fighting in their undies then this game is probably not for you.