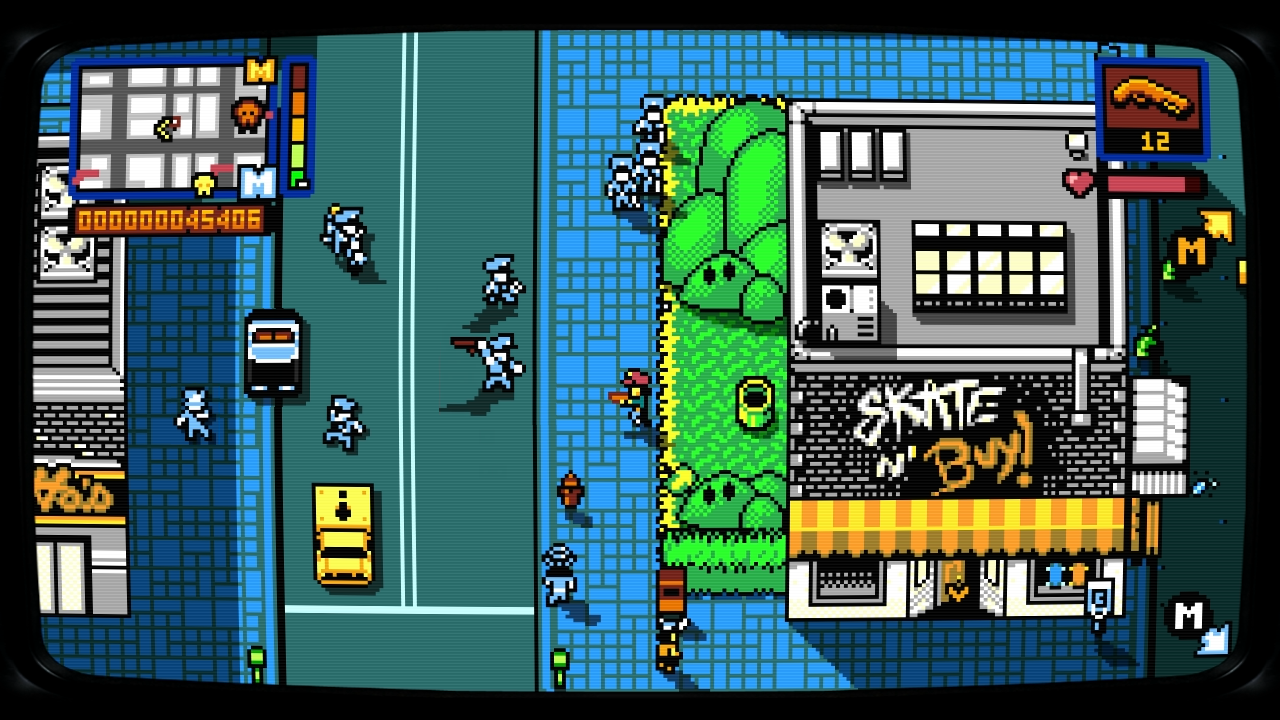 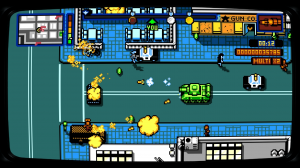 Good parody in any medium is a tough act to accomplish. The subjective nature of humour and the subject of your affection can make this a tricky minefield to navigate. Retro City Rampage: DX arrives on the PlayStation 4 having attempted to do this on numerous platforms since its initial 2012 release and hopes to still resonate on a new generation of consoles.

Let it be said, this is not a game confused about its tone or audience. Through the game’s numerous stages, playful shots are fired in all directions at targets ranging from Smash TV, Metal Gear and numerous classic ’80s movies. References and jokes are flung at you with scattered abandon via a sandbox which acts more like a hub world that links the game’s 60+ stages. The world, akin to the original Grand Theft Auto offers a 2D landscape packed with an astounding sense of detail reminiscent of Rockstar’s later work. Pun-laden store fronts and billboards add further colour to a bright world and, whilst it seems overdone at times, you can’t help but admire the effort and love that’s gone into crafting Theftopolis.

This extends to the look and sound of the game with a really fitting 8-bit soundtrack and some extensive visual filters that pluck at your nostalgia strings even more. There’s some nerdy attention to detail as you scroll through and see how they’ve tried to replicate the look of everything from a Commadore 64 to a Virtual Boy. The gritty, muddied look of an arcade monitor is incredibly well-realised and The whole package is enveloped in this 80s retro charm which all fits very well. 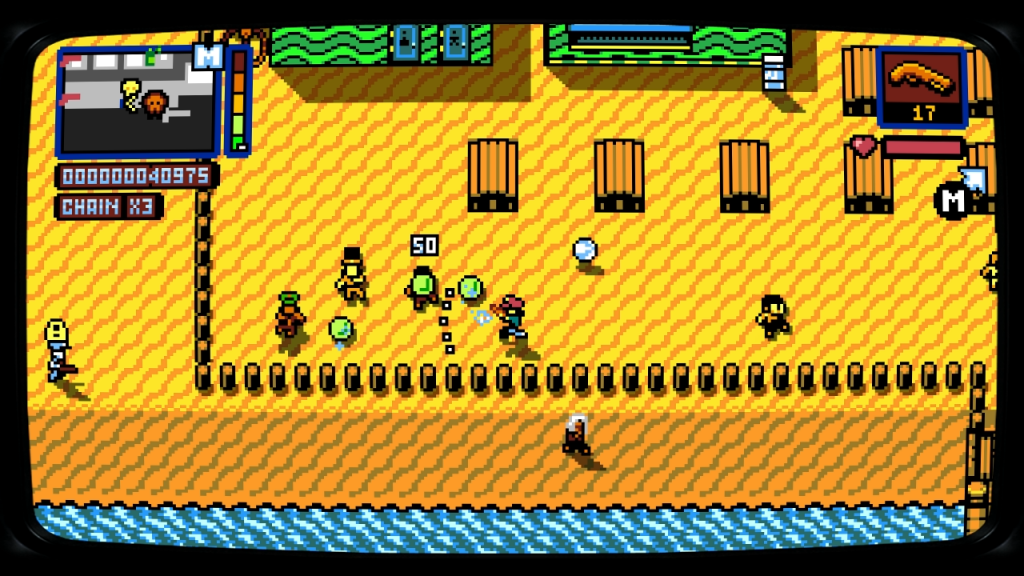 The plot is nonsense but the main thread involves you scouring the town securing car parts for Doc Choc, a non-union equivalent of Back to the Future’s Doc Brown as he attempts to fix his time-travelling Delorean. Along the way you’ll encounter a persistent nemesis in a moustachioed robot enthusiast who you will regularly have to thwart. Its suitably daft and the main quest does offer some narrative to a game which mostly resembles a disjointed sketch show.

Out in the open, the game plays like a Grand Theft Auto clone with people to maul, weapons to find and mayhem to create. In contrast, the game’s many stages feel like separate entities designed mostly to mimic and make fun of gaming’s 8-bit past. Amongst these are homages to twin-stick shooters, stealth action, side-scrolling shooters and good old Frogger, complete with their own set of core mechanics. Its incredibly varied, although some stages don’t hit the heights they’re aiming for. There’s the obligatory tailing mission which provided some early frustration and the stomp mechanic requires a little precision which the controls don’t honestly allow for. Thankfully, stages like this rarely outstay their welcome. Everything proceeds at a breakneck pace but it can result in roadblocks appearing more troublesome than in other games. In-keeping with most sandbox titles, side-missions and slaughter sprees offer some optional diversions for those wanting additional challenges, some of which are exclusive to the DX release of the game. Power ups offer perks like super speed and vigilante missions see you take on the role of a certain caped crusader. 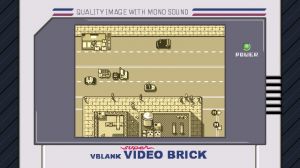 With the game striving so hard to be faithful to its muse, there are situations when the game can overstep the mark. The humour especially is so constant and full-blooded that it could turn some people away. Its good for the most part but there are definite instances of jokes falling flat (the entire Metal Gear stage rubbed me the wrong way) and the tempo of proceedings can both help and hinder this. Your experience may vary but the short, sharp jabs of humour weren’t as grating as I anticipated. You’ll know within 10 minutes whether you’re on board. Be prepared, at times, to tolerate it.

Retro City Rampage: DX is a cartoony, full-throttled love letter jammed full of content which I would recommend to anyone willing to tolerate a fast-pasted, sometimes overbearing experience. The gameplay offers mostly a fun, varied playthrough with plenty to see along your 6 hour journey. Even after times of frustration, I found myself being won over by V-Blank’s detailed world and sheer ambition whilst persevering to see what lay around the next turn. Its definitely worth your time.

Retro City Rampage DX
7 Overall
Pros
+ Ambitious undertaking with great attention to detail. + Varied and entertaining story mode. + Plenty of content.
Cons
- Sometimes tries too hard. - Some mechanics miss the mark. - Aimed at a specific audience.
Summary
It pushes its luck sometimes but you're never in one spot long enough with this game to start becoming boring. It's aimed at a very specific crowd and some subjects transfer to the game's brand of paraody easier than others but I enjoyed this. Its ambitious with some great details on display. Its niche but will find its audience.