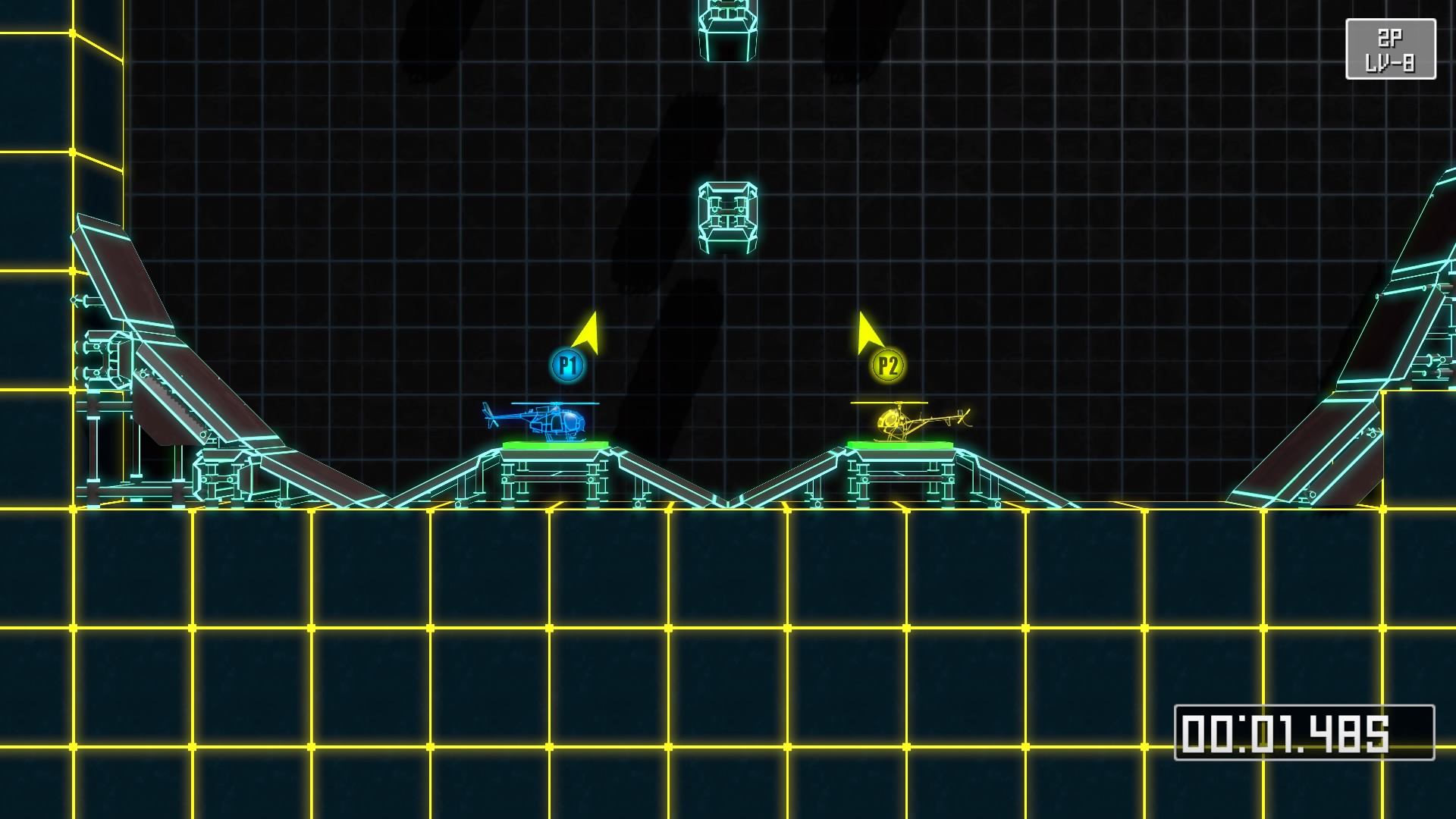 Five-man developer Depth First Games are aiming to give whirlybirds the Trials treatment with this tricky 2.5D time trial. Having been available in the US since September, they finally unleashed it on the UK store for us to check out. Engines are on and blades are spinning. 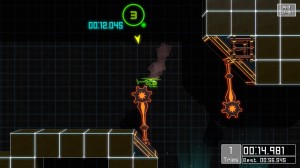 Taking inspiration from vector graphics, the aesthetics of Rally Copters is simple. Vibrant wirefame walls and obstacles are off-set against a black void. It makes the path to victory very easy to grasp and there’s a guideline on by default to point you towards the next checkpoint. There’s very little here in the way of flourish so the gameplay gets more focus. Visually, it pays homage to the ZX Spectrum colour palette and feels like some of those of those bitesize games you’d grab on a cheap compilation disc. It does a decent job, even if it lacks any real variety. Sound is also pretty basic with some thematically appropriate plinks and plonks to indicate when your copter takes damage or is under fire. The background music is decent but sometimes guitars don’t mesh with the retro visuals.

You play as a helicopter trying to get through a series of increasingly difficult mazes. En route there’s multiple obstacles to traverse and checkpoints to hit. Your movement is physics-based so your helicopter can hover, carry inertia and will build up speed over time. You need to account for all of these for clean runs and its where the game’s main challenge comes from. Trying to master the consistent controls whilst dealing with a global cycle of death can provide endless frustration. You move with the left stick and the right stick can be used to dive and switch orientation. You move faster when facing forward and switching offers you a brief invincibility window, so using these tools effectively can really help you improve times. Quick, faultless runs are fun to achieve but there’s no way to race friend’s ghosts or track your best times until you finish. You’re not going to get the kind of feedback Trials gives you, sadly. 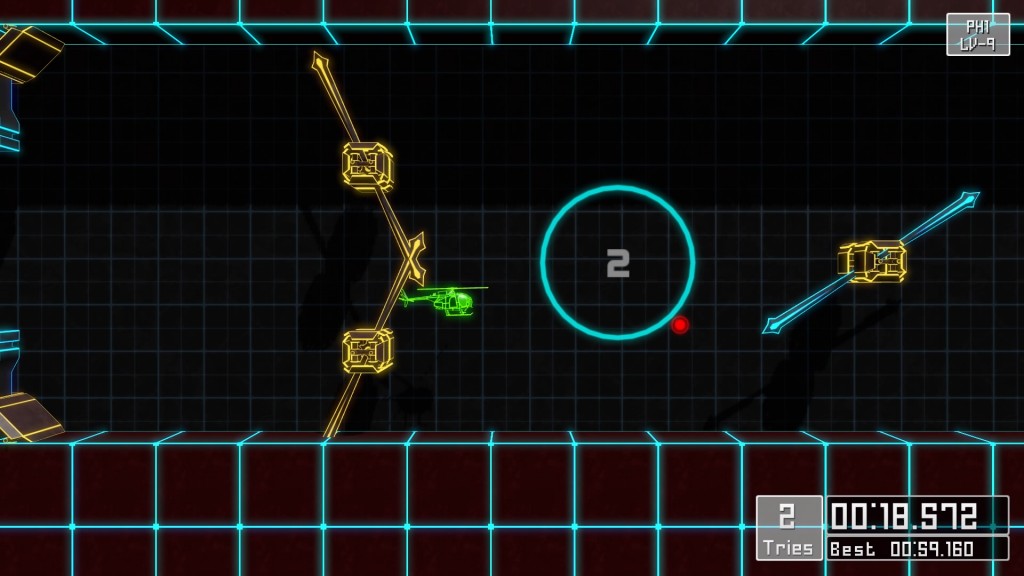 Unfortunately, the levels really lack a flow. Checkpoints are plentiful but it all feels very stop-start. That’s a problem when momentum comes into play with certain obstacles. It’s one of those games where banging your head against a spot is all too normal and your mastery of a problem can be quickly undermined by hitting the next brick wall. It makes faultless runs are a real test of patience, skill, memory and luck. And for the rest of us, be prepared to take the little victories with main slice of failure.

Along the way you can beat flag races to unlock new helicopters which all come with their own advantages. They’re rated in terms of speed and mobility but they generally offer better vehicles as you progress through the game. The additional hardware doesn’t seem essential but it can certainly give you an advantage in the later tracks. You’ve got medals to chase which are all ranked on time, although you receive time penalties for bumps and restarts. It gives you something to persevere with once the game’s main course is finished. The game also features a local two-player competitive mode which allows you and friend to battle for checkpoints. The game does have a neat twist on leaderboards with the record time influencing the gold medal time. Having a shifting goalpost could help keep the game competitive, providing the community stays strong. 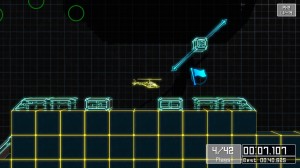 Your chosen helicopter is durable enough to take a few hits and you know when your bird is on its last legs as it spews blocky smoke before spinning to its demise. Failure comes at little cost other than time so you can force your way through levels just to see this game out. Do that and the game’s 27 levels can be over inside a couple of hours. It’ll hopefully find its audience across Steam and on the Vita but £8.99 might be a tough sell for anyone slightly curious at launch.

Ultimately, Rally Copters is a neat little thing let down by a lack of content and frustrating level design. With the right audience, the constant chase of leaderboards might be enough to foster a following and it does reward your skill, patience and luck. It’s all just too short-lived for me and I’m not sure what would entice me back into the cockpit.  It’s not bad by any stretch, just not particularly enduring.

Rally Copters
6 Overall
Pros
+ Tight controls + Consistent physics + Revised gold medal times are a neat idea.
Cons
- Brief campaign - Light on content and options - Lacks a certain flow
Summary
A lack of content and options seem to stifle a game that already struggles to find momentum. Your patience and skill is rewarded and the changing face of the leaderboards give you something to strive for. With a sharp retro aesthetic and soundtrack, it'll give you some nostalgia but it's all too slim and brief. Its not bad but there's little to return for.
We use cookies on our website to give you the most relevant experience by remembering your preferences and repeat visits. By clicking “Accept”, you consent to the use of ALL the cookies.
Cookie settingsACCEPTREJECT
Manage consent