In some ways, Bethesda’s original 2011 shoot ’em up was everything you’d expect from a crossover project between them and Id Software, the original FPS masters who pretty much defined the genre with Wolfenstein and Doom before their Quake games set the template for pretty much every online shooter ever created afterwards.

It had the Id Software gunplay with plenty of diverse and powerful weapons to play with and a shotgun that you could feel in your bones but it was also married to the sort of post-apocalyptic wasteland setting that Bethesda first started dabbling around with in their Fallout games.

It did well in the reviews, gaining a very respectable Metacritic score of 81% but not necessarily making anyone’s top five lists for best games of last generation. It was also notable for being John Carmack’s last project with Id, the Doomfather himself moving to OculusVR. 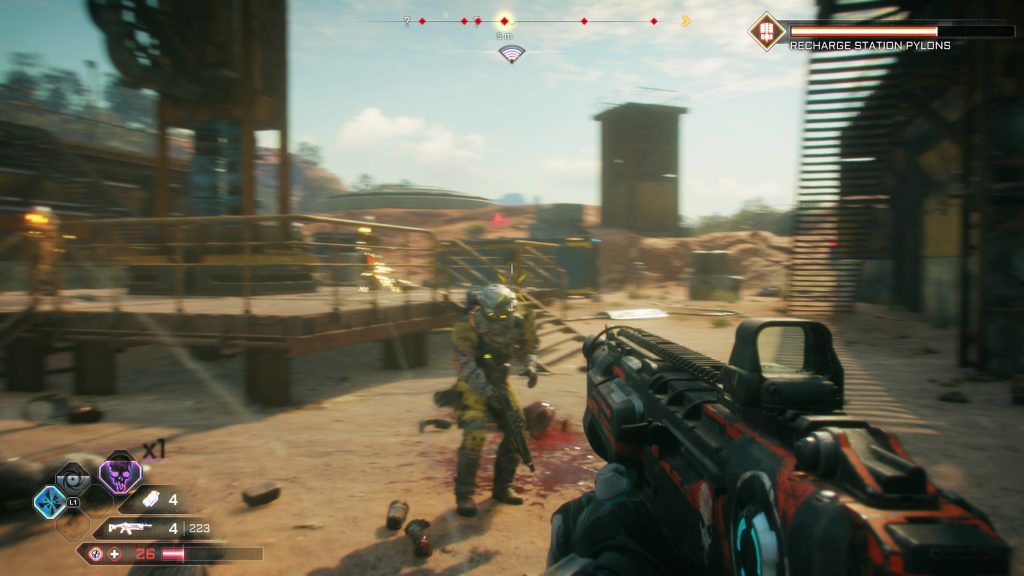 But here we are in 2019 with Rage 2, also an Id/Bethesda crossover but also with Avalanche Software (Just Cause, Mad Max) delivering the open world gameplay part of the game. Set thirty years after the original, the story sees the original totalitarian prick squad, The Authority, rising from the ashes and looking to take over the world once more with their scary but impressive army of modified super soldiers and an alarming amount of technological know-how.  Not bad given that they’ve been living in a giant warehouse for the last thirty years.

You play as Walker, a Ranger who ends up being humanity’s last hope after his captain, and mentor, is killed by the all-too-generically named General Cross. However, as he’s literally just qualified he’s got the job title but none of the savvy and certainly none of the tasty gear.

This, of course, sets you up for a few dozen hours of searching around for new weapons and abilities, and the resources you’ll need to upgrade them. As is all too often the case with modern games, cash isn’t enough. You’ve also got to mine feltrite which is a the valuable commodity that everyone in Rage 2 is after. Enemies drop it, boxes contain it and you can even mine it out of the rock in some places. 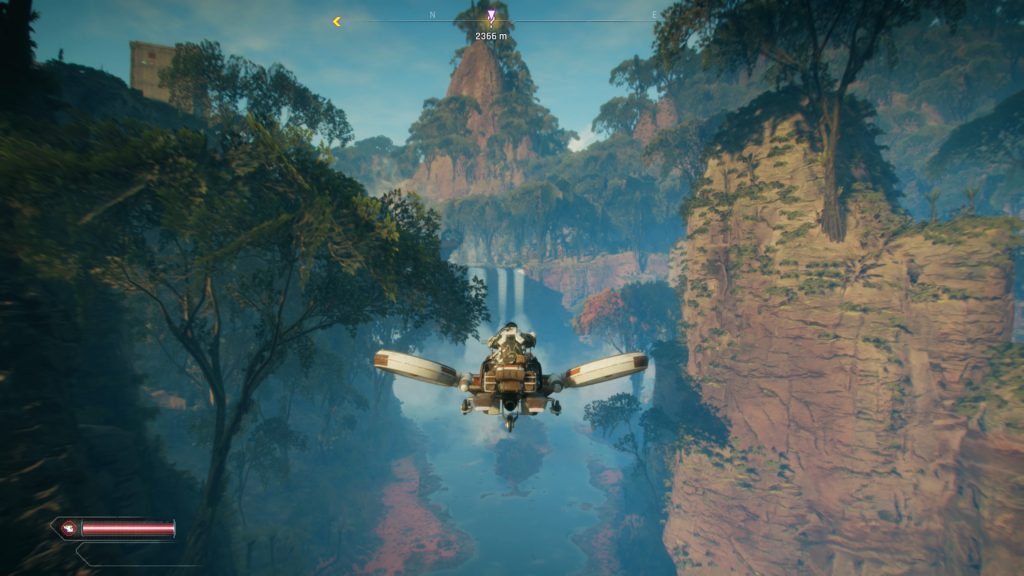 With the right resources you can gain and level up abilities such as extra jumping, melee attacks, casting blackhole vortexes and a host of other skills. Sadly, none of these are truly game-changing, with them ranging from ‘nice to have’ to ‘useless’ for the most part. That’s a shame as you’d like to feel like a badass by the end of the game but instead you just feel capable, like the soldier you would have been if Walker had had a chance to go on a few missions before General Cross decided to raise his ugly mug.

In terms of the game, it’s very easy to describe by way of comparisons to other games. The chunky, satisfying gunplay of Doom (2016) with the environment and missions of Borderlands. That is to say that you’ll be either working through the main campaign missions or deviating to follow side missions or loot tip-offs. It’s got the usual bounty boards, desperate citizens and greedy rich people all waiting to clog up your to-do list with another fetch or assassinate quest, just as you will have experienced with Gearbox’s open world desert scutfests.

A huge sprawling open world is only a good thing if you’ve got a heap of interesting things in it, otherwise its just distance and, unfortunately, when you have a post-apocalyptic setting and a ton of mileage, it’s never going to be that interesting a world to be in. That is the case here for sure. Whenever you are outside of a mission you’ll be driving around barren wastelands occasionally running into easy-to-ignore bandits. 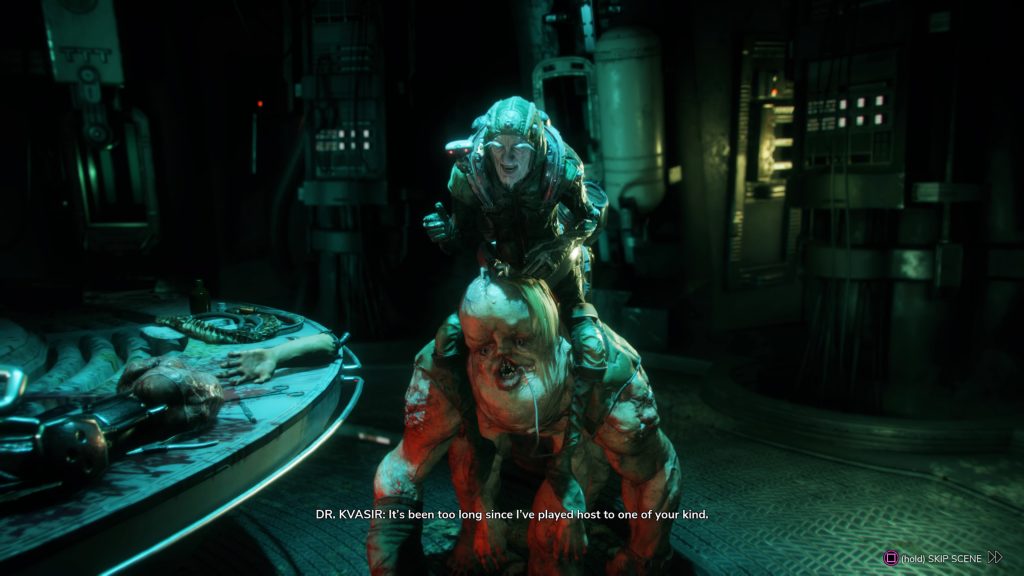 The vehicles have had a bit of a panning from other commentors but they’re fine. They aren’t brilliant in combat (although you can upgrade them) but they handle far better than the ones in Borderlands and have enough speed to make them worthwhile. The on-board GPS uses the same pink hue that permeates through the dusty browns and greys of the wasteland and isn’t always the easiest to follow but getting around is fine. That said, and this is a general problem in all open world games, driving isn’t gameplay. It never has been and this is just another game where you may as well just have a loading screen instead of the minute or two’s driving that will get you to your next mission.

So far it seems like I’m not into the game but, oddly enough, that’s not the case. Sure, for the first thirty minutes I really wasn’t feeling it and asked one of the other writers on the team if they fancied doing it instead but then I gave it a bit more time, got into some good gun battles, upgraded a bit, found the shotgun and suddenly I was more engaged.

It wasn’t long before I lost all interest in the plot but I enjoyed the challenge of the missions and the shooting which is excellent. I wasn’t a huge fan of Doom because I hated the level design but I did always like the combat and you get the same feel from this game when you’re shooting folks.  And the story missions are enjoyable to great through and, mercifully, there aren’t too many of them. 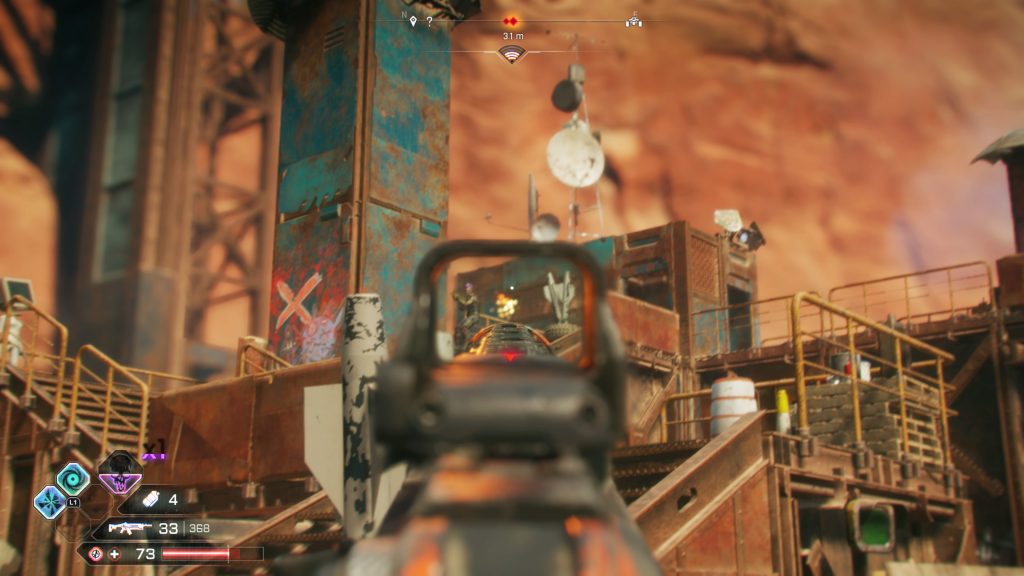 The game does let itself down a bit with the collectables. Every location has data pads (tablets that give you a bit of extra story) and storage chests full of money or fertrite but these are oddly hard to find and eventually I found myself leaving locations with two or three chests found out of eight. My OCD absolutely beaten out of me by my ‘not arsedness’ but you are able to gain an ability that lets you track these collectables a little easier.

We’ve sat on this review a little longer than other outlets and that might be to Rage 2‘s advantage.  Initially, it has a bunch of characteristics we don’t like:  bland open world, too many different upgrade systems, too many side missions, too many collectables.  But over time you realise that this stuff is reasonably easy to deal with.  The upgrading feels optional, if you play through the story missions and ignore the side missions you may actually enjoy the game more and it gets easier to deal with collectables later on.  The only real issue is that world.  Games that have hundreds of square miles of nothing are a problem.  Worlds where there’s nothing you’d want to see in real life are a problem.  Worlds where the only interesting things are things you’ve already seen in Borderlands, Fallout and Mad Max are a problem.

As such we just didn’t enjoy the environment and the characters within are mostly the same types of characters that you saw in Borderlands also.  They’ve all got ridiculous names which seem to have been generated by some sort of ‘what Mad Max character are you?’ name generator (Dick Cockerspaniel, Gumball Deuce, Sidney Quickdraw etc) but are the usual mix of rich-but-eccentric business owners or rugged freedom fighters. 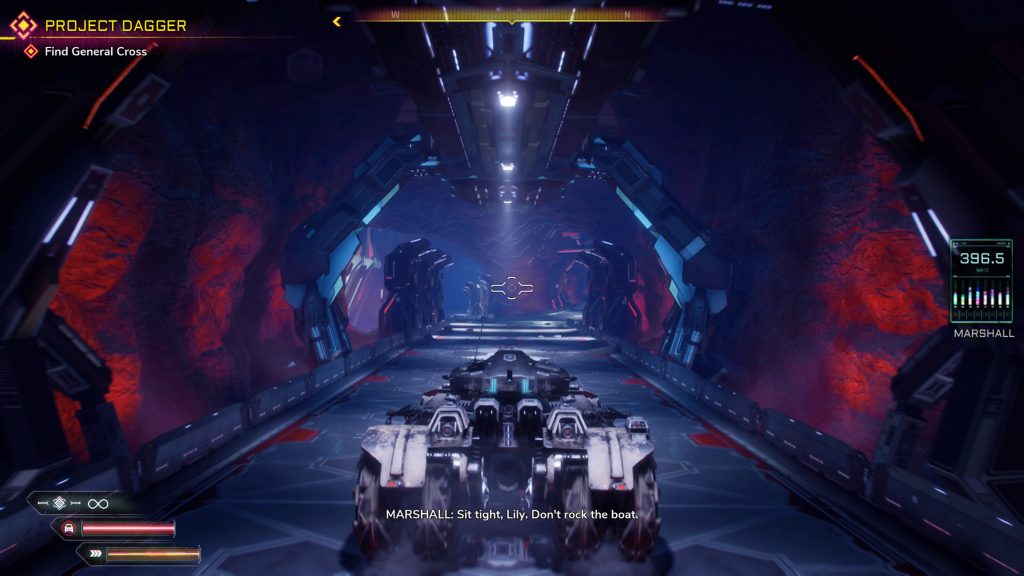 The presentation isn’t amazing either with the unremarkable environments and fairly ugly character models making this feel closer to a launch title.  The occasional big boss enemy adds a little bit of scale and drama but outside of that this is a very by-the-numbers post-apocalyptic effort that does enough to be a credible full-release title but not enough to win too much acclaim in a space where Far Cry 5, Horizon: Zero Dawn and even something like InFamous: Second Son exist.  The audio design fares better with the sounds of combat, the voice acting and the music all adding some colour to this otherwise drab world.

Here’s the thing though.  We’re enjoying the game and it is thanks to those great gun battles.  At its best, Rage 2 is the sort of game where you walk into a giant warehouse full of enemies, you pick off some of them with your long range weapons – watching as they evade and try to get a better position on you – before falling back with your close up weapons while using your shatter ability to take out the nearest threat and maybe chucking a vortex over there where a couple of guys are about to try to get the jump on you.  In a game primarily about shooting, we’re pleased that the battles are so satisfying and are a bit more challenging than the likes of Far Cry 5.  Death happens pretty easily here but the open world aspect does allow you to mix up your tactics and try new approaches until you sail through a gunfight that previously gave you fits.  And we’ve not gotten tired of them yet.

So really this is a great shooter wrapped up in a pretty average open world title.  Sometimes less is more and if Rage 2 had been a linear shooter like Bethesda’s own Wolfenstein games, it probably would have been a much easier game to recommend but there’s a lot of game here for your money and some of the best gun combat on the system.

Rage 2
7 Overall
Pros
+ Excellent shooting
+ Good choice of weapons
+ Main campaign isn't overly long
Cons
- Visuals aren't top quality
- Bland open world
- Upgrading and collectables are a bit fussy
- Too much driving required
- Seen it all before
- Slow UI
Summary
Rage 2 is a truly excellent shooter with big, beefy weapons and some huge, challenging battles to participate in. However, it is wrapped up in an open world which is quite bland and too generic to separate it from all the post-apocalyptic sandbox shooters that have come before it.