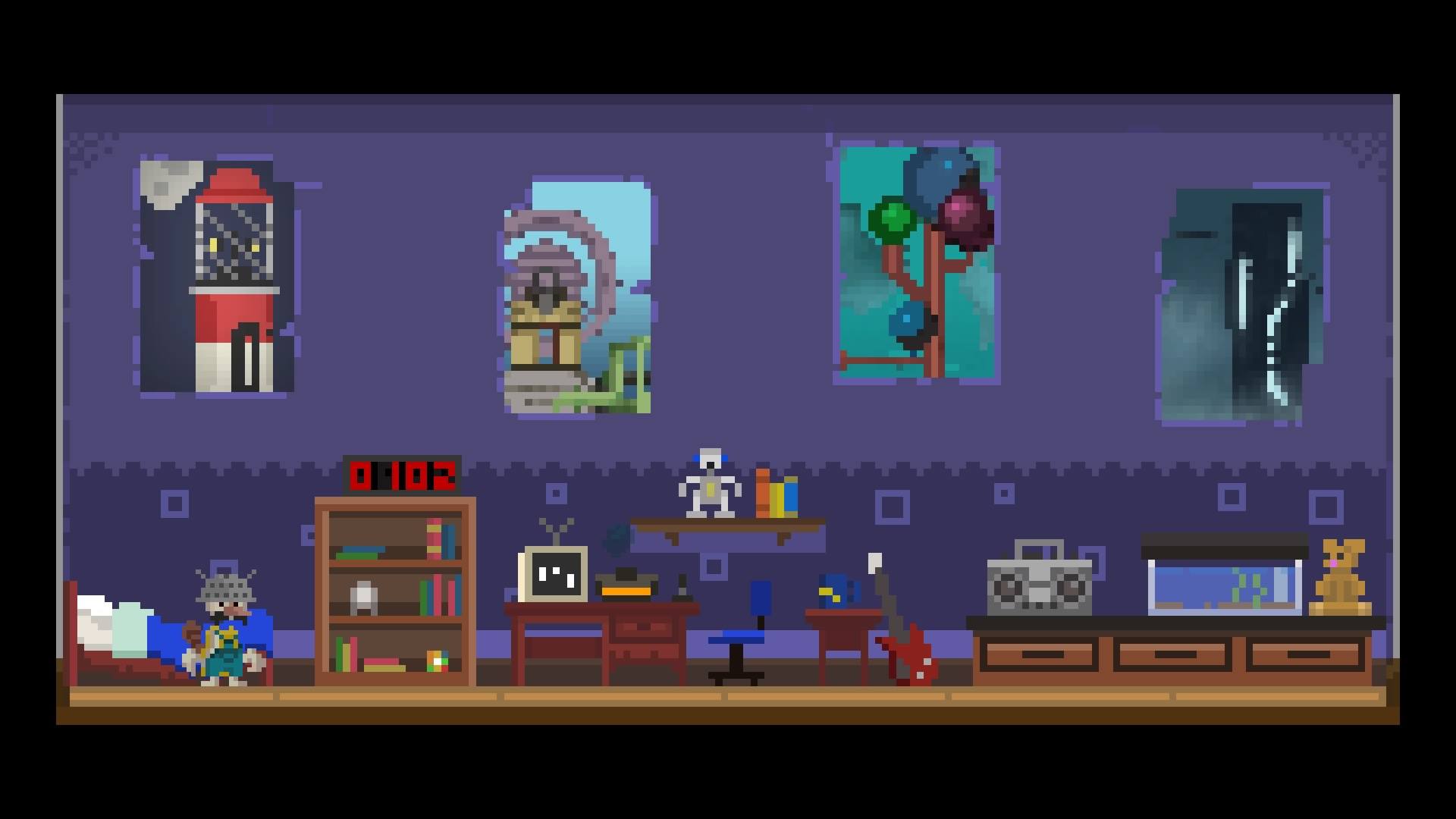 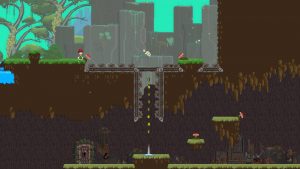 Platforming games used to be great, didn’t they? They once stood tall as the industry standard, with colourful mascots appearing out of the woodwork, all competing to be the new big thing. Hell, at one point it was the most subscribed genre, like how FPS games are now. With so many similar titles launching back to back it was no wonder they hit saturation point, especially when Doom decided to come by and ruin everything with big guns and wondrous buckets of gore. The platformer genre after may have fallen to the way back when, but luckily we have independent game developers to thank for at least keeping the flame alive. Kind of.

We have all seen it, you have probably played one in the past couple of years. Whether it be called Braid or DLC Quest, there has been a rise of what I like to call ‘The Self Referential retro adventure’. A whole new category of games that seeks to peak back at the greats of yesterday, give it a modern spin and then call it a heart-warming tribute. Such games also include exposition and dialogue that gleefully points fun at things such as pixels, lack of save points and Bits while also slapping some copyright baiting imagery in there all in the name of having a bit of a laugh.

Ticking all the above boxes is A Pixel Story from Lamplight Studios. In this game, you play as an anthropomorphised Pong ball who must save the world from evil in the usual manner of moving and jumping across platforms in a very puzzle platformer style way. Along your journey you must collect memory, the gem like McGuffins littered around each level that both act as exposition pieces and as your keys to the next batch of areas. Early in the adventure you get a magic hat that acts as the main gimmick of A Pixel Story. This hat can be placed down and then used to teleport back to where you left it in an instant, providing the core gimmick of this retro tinged platformer. 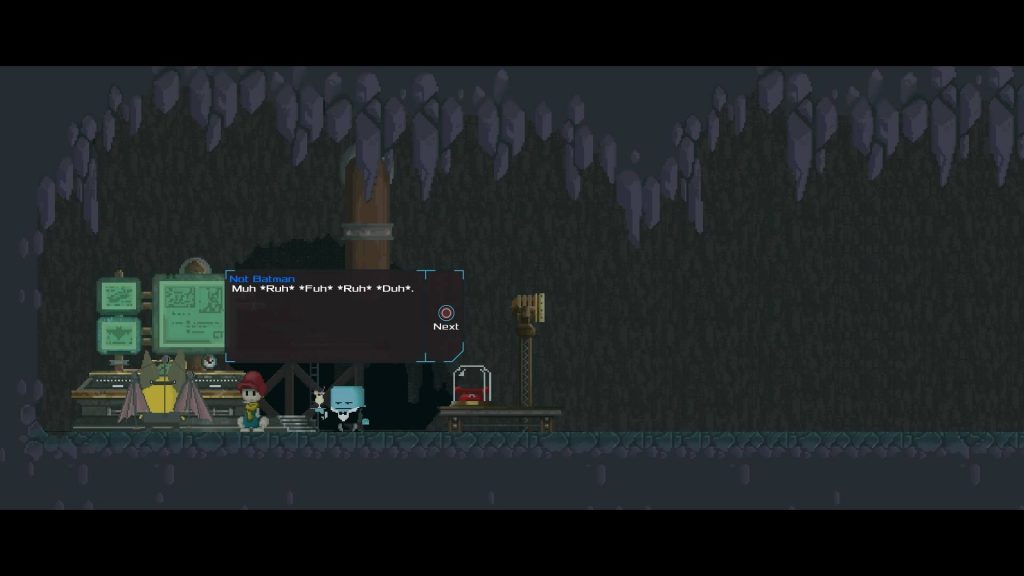 It sounds standard and for the most part it is. The platforming itself feels functional but somewhat unremarkable. However, the teleporting hat gimmick is strong and goes some way to breaking up the usual run and jump affair. It is used in most of the puzzles you encounter in quite a lot of different ways. For example, you might have two parallel platforms that are moving vertically with a peak, Use the hat on a lower platform at said peak and then you can teleport to the hat to reach the upper platform. Alternatively, there may be a timed puzzle in which you must activate a switch to get through a trap door. Set the hat down near the trapdoor, activate the switch and teleport. It’s again simple, however it does mix up quite nicely as you progress, I just wouldn’t call it exactly challenging. A Pixel Story is designed in a way to keep you moving forward rather than getting stuck on a puzzle, something I appreciated greatly.

If you are looking for something a bit more challenging however then A Pixel Story also has you covered there. Peppered across the landscape are challenge rooms that you can unlock with the coins that you collect along the way. These are purposefully designed to be a bit on the sadistic side, taking cues from the likes of Super Meat Boy or VVVVV in style. I much preferred that these were gated as opposed to part of the main adventure though as I feel that the game would have been far less enjoyable in the long run, it also lets more casual gamers have fun as opposed to punishing them for ever wanted their heart warmed by bits and pixels.

As this is a tribute to gaming history there is more at play here also. Throughout the game the backdrops and style of the game shifts across generations and their graphical upgrades. You start at the beginning of it all as the pong ball, but you then zip forward to a roughly 8-bit style when you take control. I found this to be a bit cool at first however the problem I found is that despite the graphical and sound differences, the game didn’t change much at all functionally. You only ever play the game in a 2D platformer style, so the generations meant less. I would have also like to have seen the earlier than 8-bit style being used more as well. I just feel that if you are making a tribute to gaming then make it a tribute to more than just another 8-bit plus title. 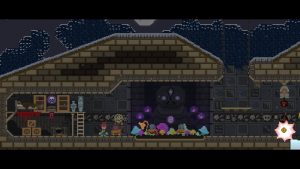 Another thing that I feel is worth mentioning is the soundtrack. Of course, as the gaming generations shift the music changes along with the graphics and character design. The problem is that the 8-Bit style that you are greeted with tends to be incredibly annoying. Just about every synth-bop nice you hear is of the shrill, high pitched variety that annoyed our mothers so much while playing Gameboy in the car. Another thing I could have certainly done without however is Search. This is a robot character within the game that is designed purely for exposition and dialogue in contrast to the mute hero that you play. By exposition I mean that all he does is pause the gameplay to tell you a bit more story and a couple of retro related jokes, it just feels like the game is trying too hard to be charming and witty and unfortunately it just falls flat.

A Pixel Story
6 Overall
Pros
+ The magical hat puzzling system is quite a strong mechanic and used in inventive ways. + The graphics of the game across the generations is very appealing. + The world and characters can be good for a laugh
Cons
- Too much focus on the story, takes control away too many times to be considered polite - The music just isn’t pleasant, particularly in the 8-Bit stages - You’ve probably played better before.
Summary
A Pixel Story promises a tribute to the classic games of yesteryear however falls unfortunately short of that goal. However, it is a competent platformer with solid puzzling mechanics and style. The only problem is, if you have played a few of these before then this may be the one too many.