When an unknown game comes into us here at PSC, this reviewer likes to check out a gameplay trailer beforehand to see if it’s our thing. In the case of Pandaball – Welcome to Pamuria our initial impression was FIFA Street with pandas. Our esteemed editor Richie & myself like a lemony street football game. We boosted FIFA Street 3 and the endearingly shonky Pure Football, both on 360.

So, it was with some disappointment that we switched on Pandaball to see the menu offered a mere three options: Multiplayer, Training and Options. Literally just that. You see, the developer GetAGame have opted to make Pandaball a multiplayer-focussed joint. They neglected to say that was the case in the gameplay trailer. Yeah, nice one. 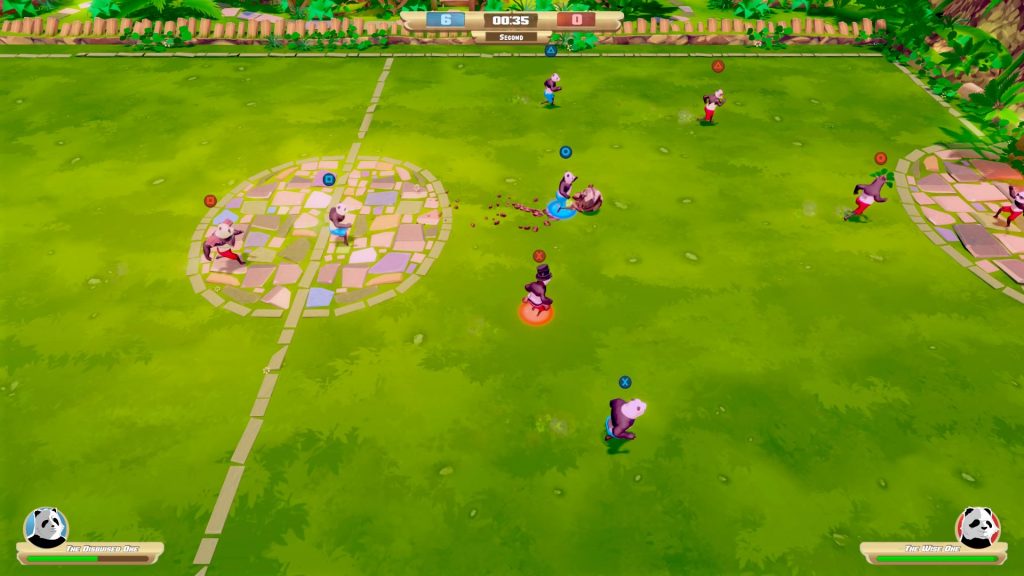 There’s couch-based multiplayer at least and quick matches via PSN, but for a game to be very much geared to multiplayer is an immediate red flag. Especially for those players who don’t have PS+ or a willing second player to hand. In our case, our six-year-old gaming buddy declared himself bored after about ten minutes. Hardly the most auspicious start.

Thankfully, buried in the training menu, there’s a single player mode of sorts. Titled “The Road” it isn’t much more than a succession of bots you play against. Were it not for the paucity of lore, we’d call it a story. But there is nothing to explain why Pamuria’s national sport is five-a-side football, much less why pandas play it. We get the feeling there might’ve been a story here once upon a time, but it was probably consigned to the cutting room floor prior to release. 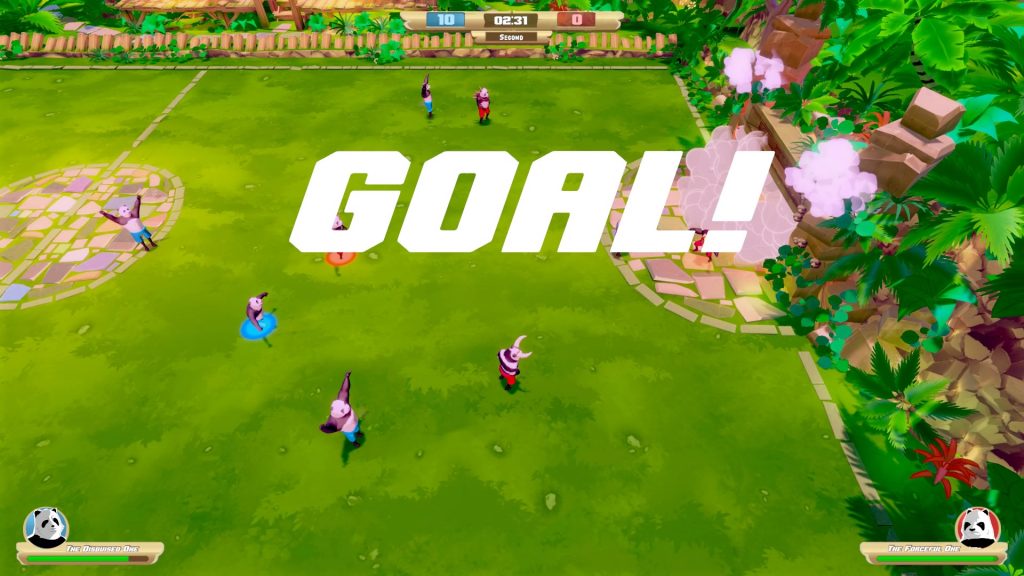 Practically, this means you get to play matches of varying difficulty, generally coming unstuck against a team on a sandy beach stage. They resort to the cheesiest of tactics and have an unerring ability to score goals from distance. AKA fuck those guys. At any rate, if you resort to the same tactics you’ll probably win, finally getting to face “The One”. And that’s your campaign done. You can get most of the trophies in this mode at the very least, your progress counting towards cumulative goals scored for example.

As you can see from the screenshots the view is a forced perspective from on high. On a large TV from across the room it’s like being in the away end at St James’ Park, you’re so removed from the action. 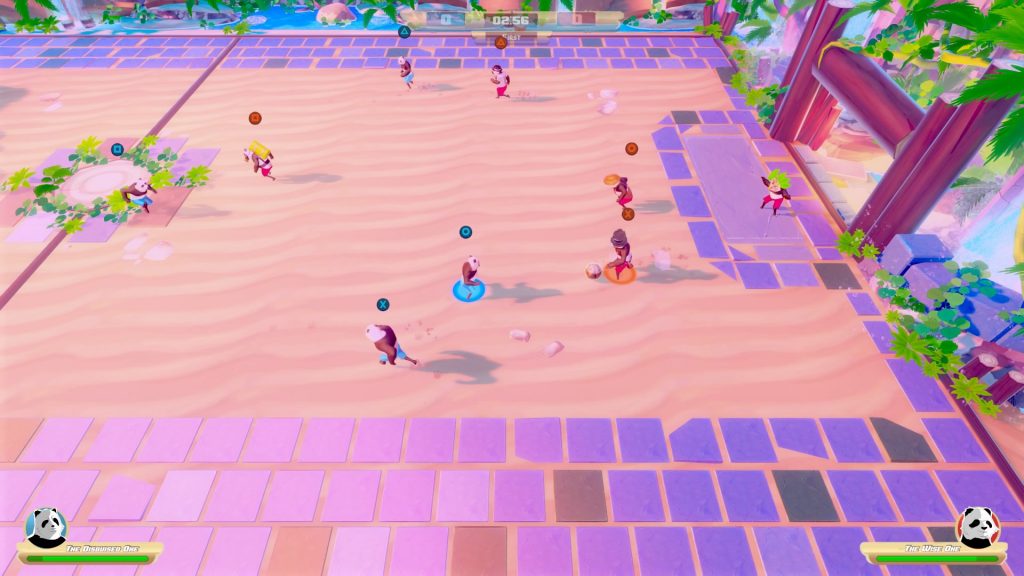 We guess this is all a primer for online play, assuming there’s anyone else out there playing this. Indie games that have a multiplayer component are all well and good, but you’ll probably be resorting to using Shareplay to get anyone to play with. Them’s the vagaries unfortunately.

Getting back to the gameplay, it isn’t actually all that bad, playing a reasonable game. Daft little mechanical problems mar what should be a straightforward implementation. In terms of control, to select a team member during a match you have to push the face button corresponding to the player in question. No auto-selecting the player nearest the ball. It makes for a counter-intuitive experience, especially for a younger player.

your left winger and

your last line of defence. Your goalie is automatically controlled, so no ability to close down opponents like virtually every other football game since the original ISS on the first Playstation. Yeah, good move there. Combined with the cheesiness you’ll no doubt face from Beach Pricks FC, you’ll concede goals due to pure bullshittery. The sequence being they attack, your goalie makes a save, they get stunned. Your opponent then scores an easy tap-in. Rinse and repeat. 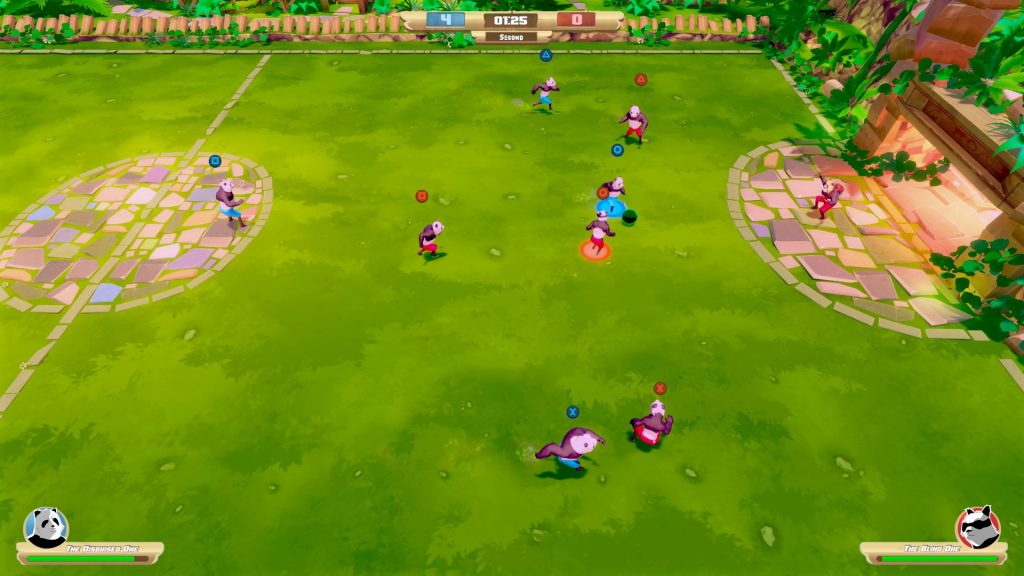 Due to player select being mapped to

, you have to attack by flicking the right stick. This is alright against an opponent not closing you down, but charging your shot slows you down. Against a faster more aggressive player, you’re guaranteed you’ll lose the ball to a tackle. The only chance you reasonably have is scoring from set pieces and even that is fraught with difficulty. If you flick in the right direction as the ball is on its way to you, there’s an outside chance of scoring a goal.

In addition to all this frippery, there’s power-ups to be had by tackling opposition players. They range from speed boost to double goals among others. There’s also special balls to be unlocked, but for the life of us we can’t work out the conditions to trigger them. For example, rock ball has a concussive effect on opposition players and counts double, there’s also beehive ball which counts for three goals. There are other special balls besides but to be honest they are a secondary concern to the shallow package here. 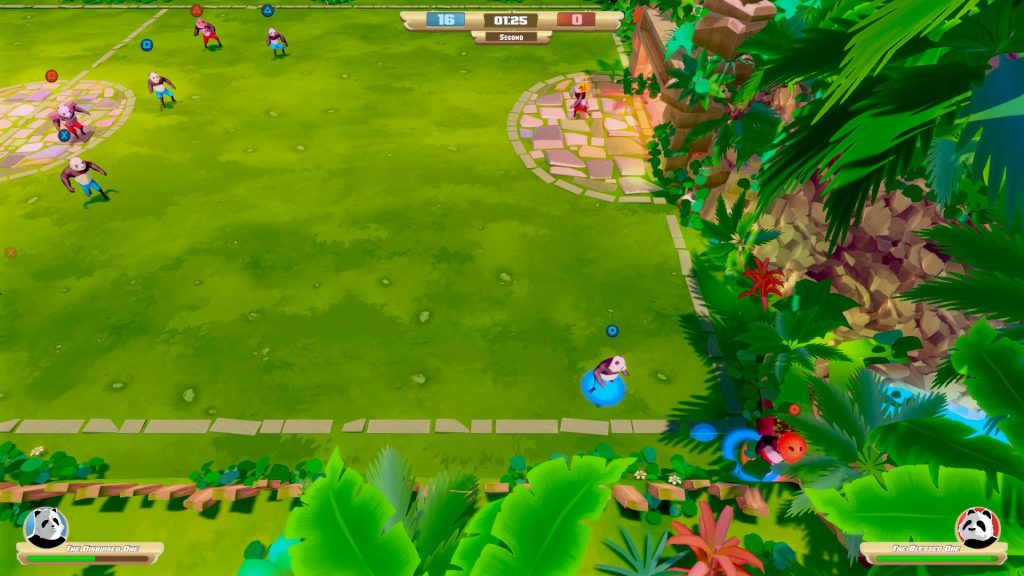 On top of this, the game has a lovely tendency to glitch as illustrated in this screenshot. A wayward clearance will leave the field of play, yet still be deemed to be a live ball. To the extent that the AI will try and retrieve the ball in vain. Your only option is to wait around until the end of the half at which point you’ll either be rewarded with a win, loss or worse still, another half of play.

It all pales into comparison next to the fact that Pandaball is remarkably slight for your £11.99. There’s really not much meat on the bones here. In fact, we’d recommend you save your money and go buy Journey To The Savage Planet instead for just eight quid more from Argos.

Pandaball – Welcome to Pamuria
4 Overall
Pros
+ Plays a reasonable game despite everything else
+ You can boost your stats in the single player story, such as it is.
+ Five-a-side football isn’t all that common in games anymore
Cons
- Primary focus is multiplayer, but not made explicitly clear in trailer
- Campaign mode is so slight as to be inconsequential
- Unintuitive player switching via face buttons, no goalie controls
- Ball has a tendency to go AWOL yet is still in play

Summary
Pandaball is a bare-bones multiplayer five-a-side football game with pandas. Not really much to it. Poor value, especially when you consider the competition.