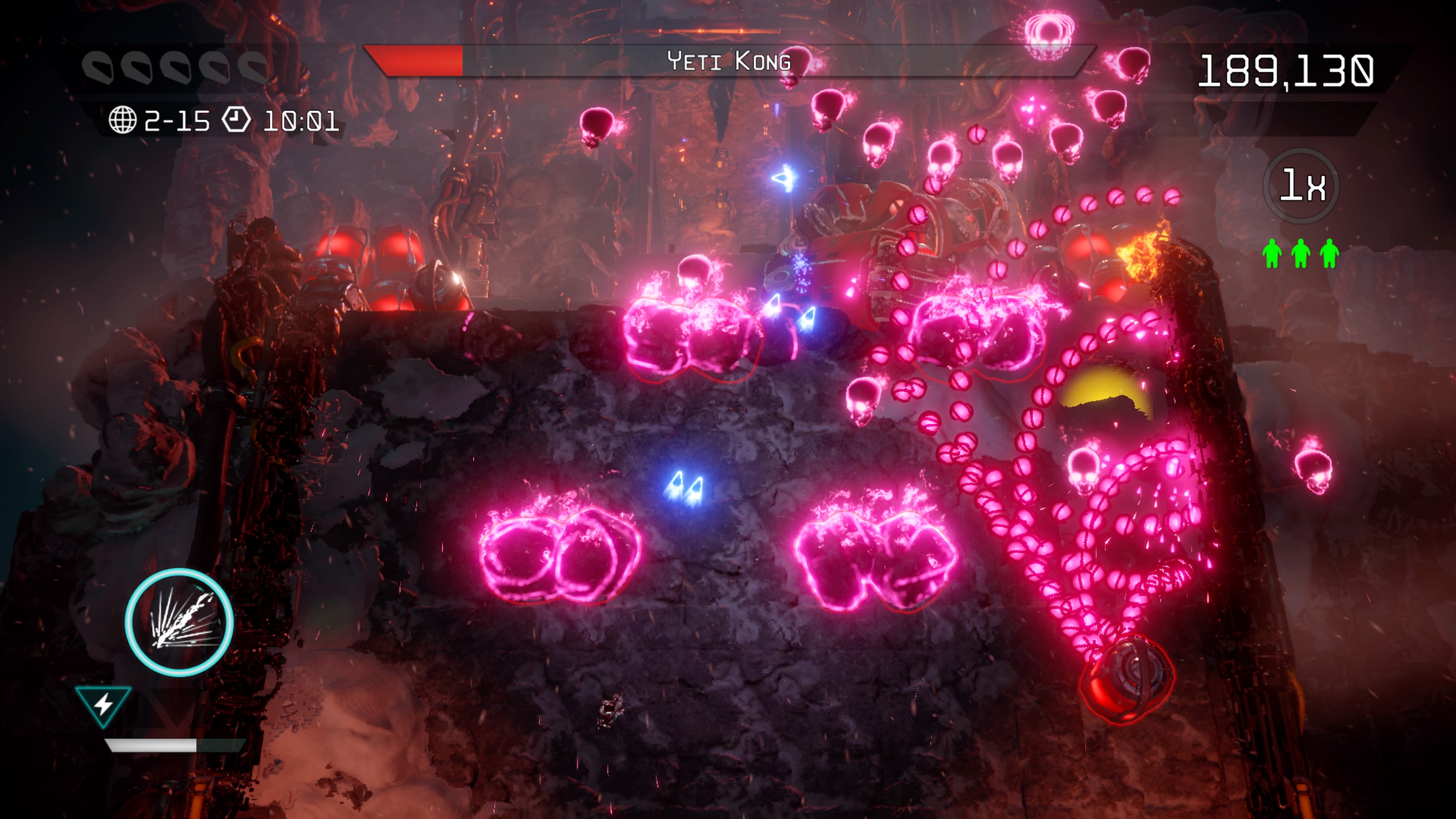 Nex Machina is the latest shoot ’em up from twin-stick powerhouses Housemarque, best known for the masterful Resogun and the not-quite-as-special Alienation and Dead Nation games.  As expected, it is another twin-stick shooter and it comes with a degree of anticipation even if this is one of the most crowded genres on PSN these days.

The game sees you (and a local co-op buddy if you so wish) making your way through six worlds all of which are full of the bastard AI scum that have near enough wiped out humanity.  Each world is separated into fifteen stages and punctuated with a boss battle.   The robots have the numbers but you’ve got the firepower at your fingertips… well, thumbtips… to even the odds and pressing the right analog stick in any direction makes your character fire a heap of plasma in the corresponding angle. 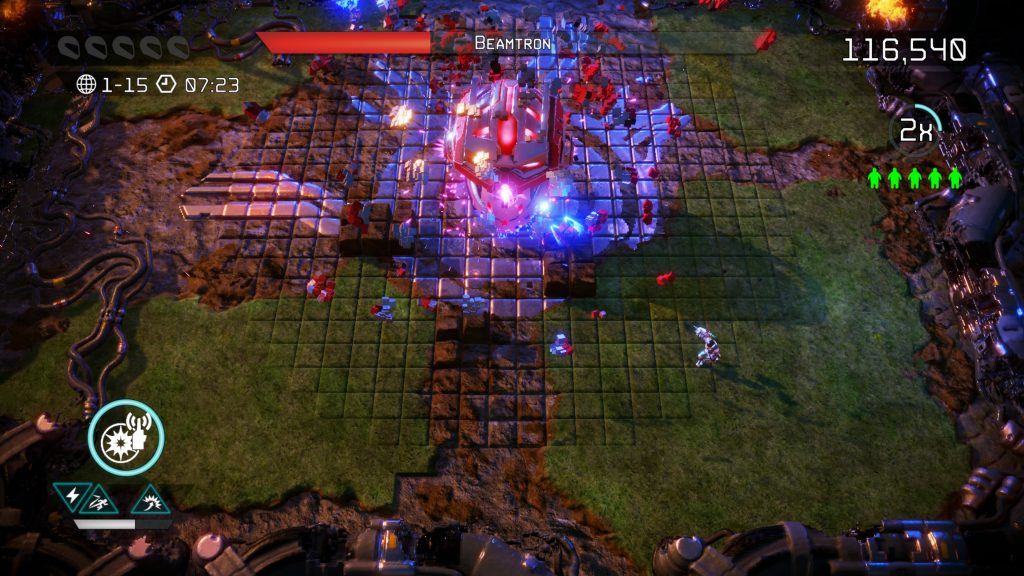 The controls are buttery smooth.   For some reason most twin-stick shooters insist on you pressing the right trigger to actually shoot.  These games are all stupid.  Nex Machina just lets you point and the bullets follow.  Just how we like it.  The triggers here are reserved for special weapons (missile launchers, lasers, charged shots and a sword which you won’t want to use) and, on the left trigger, a dash move which grants you a quick burst of speed coupled with related period of invincibility.

It is that dash that really enhances the gameplay here.  Much like Enter the Gungeon, it adds a level of strategy to the otherwise reasonably dumb (but fun) shooting action and also gives you the immense satisfaction of pulling some last second Matrix-style dodges off.  Escaping a crowd of enemies with a well-timed dash really feels good so, when it comes to the core gameplay, there is really nothing to fault here. 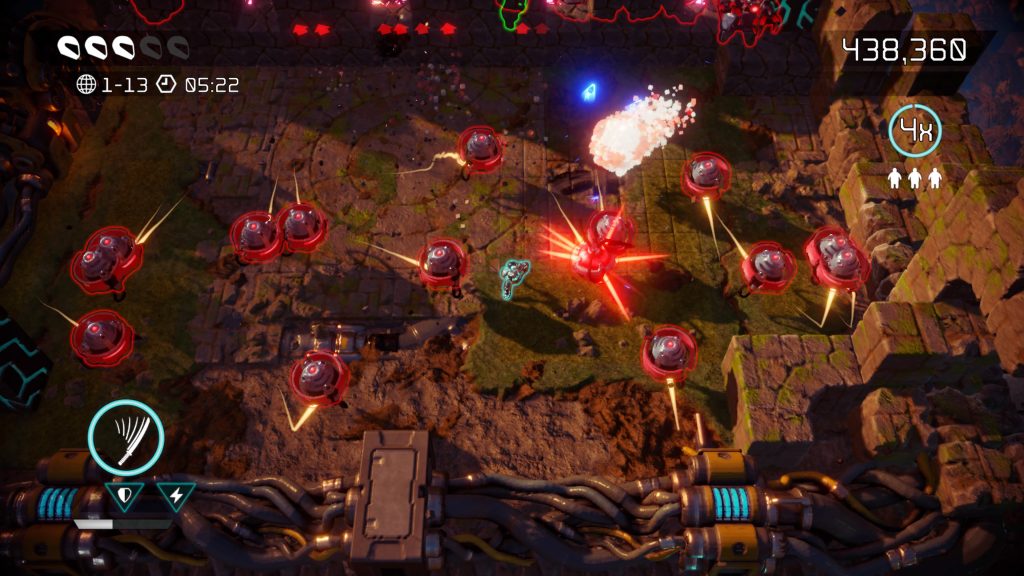 The game offers you the standard arcade mode, an arena mode (which offers gameplay modifiers to keep things interesting) and a single world mode which breaks down the slightly lengthy arcade mode into more enjoyable chunks.  To further keep you occupied there is a list of in-game ‘feats’ which are basically sub-trophies.  Resogun‘s DLC had something similar and it does give you a reason to keep diving back into the game, even if some of the feats are looking like you’ll need to be raised by Japanese androids if you ever want to successfully tackle them.

The only real issue here is variety.  There’s not a huge amount of content on offer and while we do expect Housemarque to support the game like they did with Resogun, the package does all seem a tad thin at the moment.  The price is right though (£16 at launch) and compared to its peers, it’s much more worthwhile than, say, Demon’s Crystals which is its most obvious recent competition. 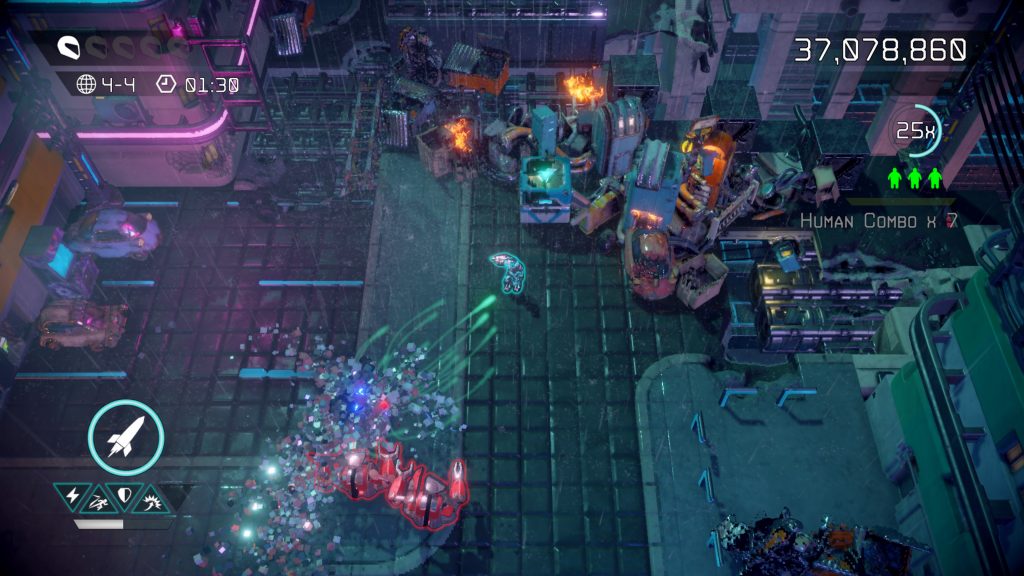 Of course, hardcore fans of the game will spend their time challenging the leaderboards and this is a worthwhile pursuit thanks to the decent scoring mechanics.  Multipliers need to be upheld (by not dying) and humans can be rescued, Robotron-style, for extra points.  Indeed the Robotron influence is deliberate as Eugene Jarvis is credited as a co-creator of this game.

Visually the game doesn’t disappoint in so far as it looks spectacular at times.  The action is silky smooth and the saturated colours mean that, for the most part, the crowded graphics don’t obscure the gameplay.  Some later enemies can be a little harder to read, especially the ones the shoot out lasers at you, but everything is colour coded in a way that you can spot what needs shooting and what needs saving.  The game employs the same coloured outlines that Diablo III used and, like that game, it does mean that the enemies themselves lack a bit of definition as really all you’ll see is the colour but it does mean that the bullet-hell aspects of the game won’t completely confuse your eyes. 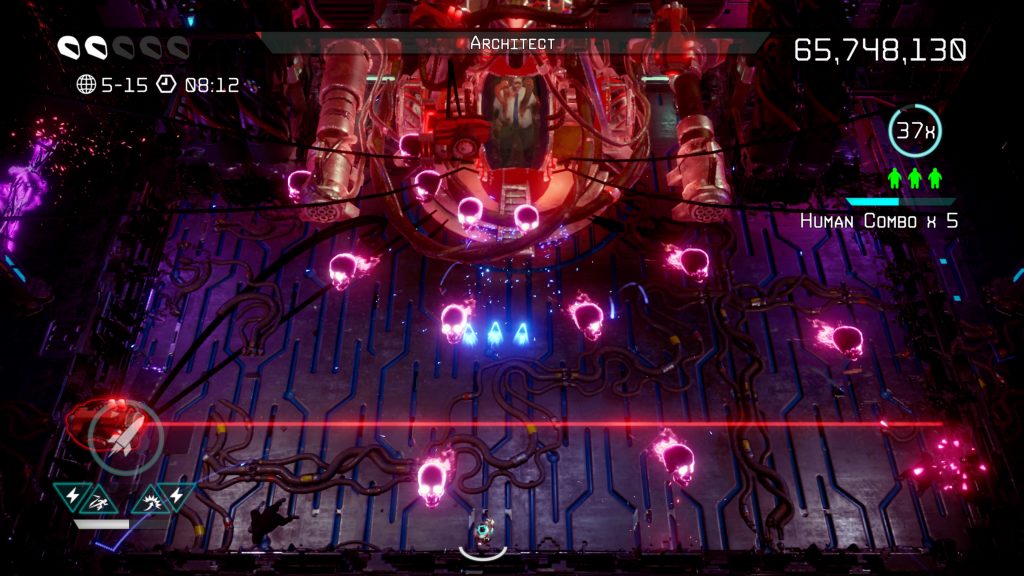 Add to that the expected-but-welcome bombastic music and the robotic lady voice announcing your latest multiplier boost and the presentation is of the standard we’ve come to expect from Housemarque.  Indeed it is their best looking game since Resogun, even if that one still edges it out for sheer wonderfulness.

So overall the game is a resounding success.  It’s not quite the classic that Resogun was but for run-and-gun style twin-sticking, there’s very little on the PlayStation 4 that can challenge it and while the harder difficulties do tend to spike at times (especially the third boss battle), there is a Rookie difficulty level for people who want to just get through the game without having too many aneurysms.  For now, the game is a very solid eight.  But if Housemarque show this game the same love they showed Resogun, we could be looking at one of the best shooters of its generation.

Nex Machina
8 Overall
Pros
+ Impeccable controls
+ Excellent visuals
+ Decent sound
+ The range of difficulty settings should cater to all
Cons
- A little lacking in content
- Visuals can occasionally get a bit much
- Boss battles can spike the difficulty a bit
Summary
The masters of twin-stick shooting are back and Nex Machina is as polished in both presentation and gameplay as you'd expect. It is a little lacking in content and variety but what's here is of the very highest level the genre has to offer.