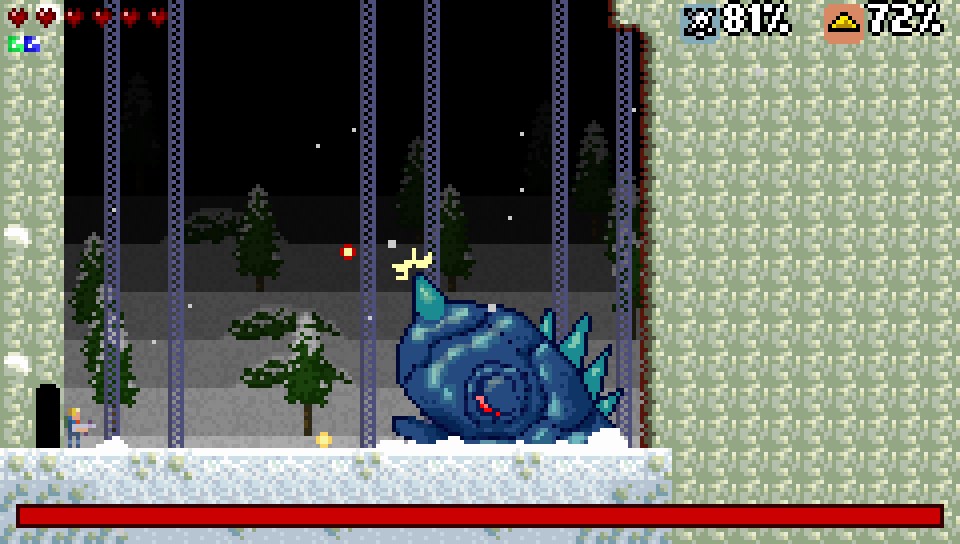 Blasting Agent: Ultimate Edition has previously been available on PC and Nintendo 3DS, having now made it’s way over to the VITA and PS4 it is time to see if its worth a purchase.  This is as indie as it comes being created by one man, Tim Hely of Axol Studio, using a 2D retro style and being priced at a less than £3.

Essentially a 2D platform shooter Blasting Agent will immediately bring to mind the classics of the genre such as Contra. Whilst these kind of games never go too hard on the narrative side of things the story here is barely existent, setting you on a mission to destroy a volcano base and kill anything which gets in your way, as far as stories go that is all you get. Given the forgettable story it was left up to the gameplay to keep me interested. 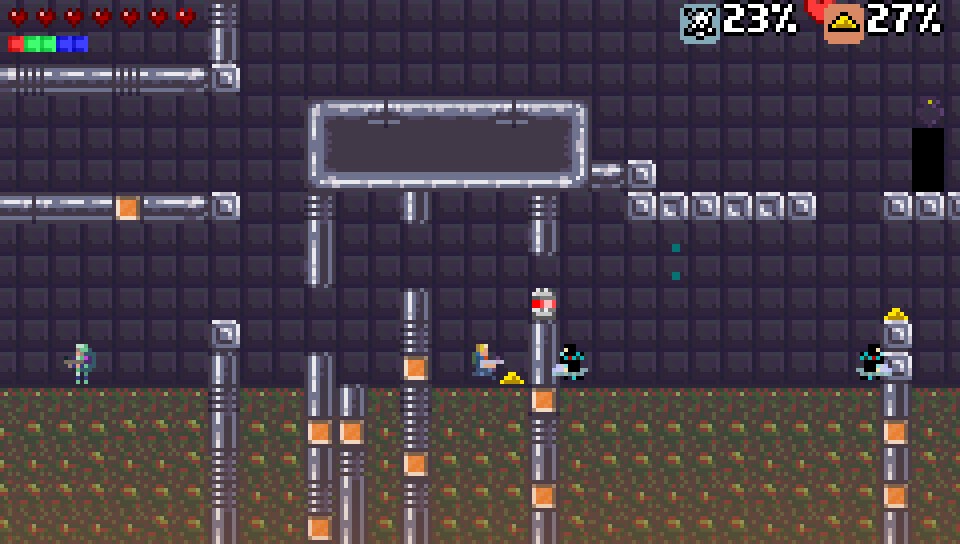 There is practically no front end or tutorial to Blasting Agent: Ultimate Edition as from the start of the game it only takes a couple of button presses to get going. Control is very basic with a button to fire and a button to jump, there are other traversal skills but these need to be unlocked through collectables.  Holding the fire button will see your character shoot continuously locking you in the direction of fire, you can’t angle your gun up though and are resolutely stuck shooting on a horizontal plane. Things remain simple throughout and the controls are fine. 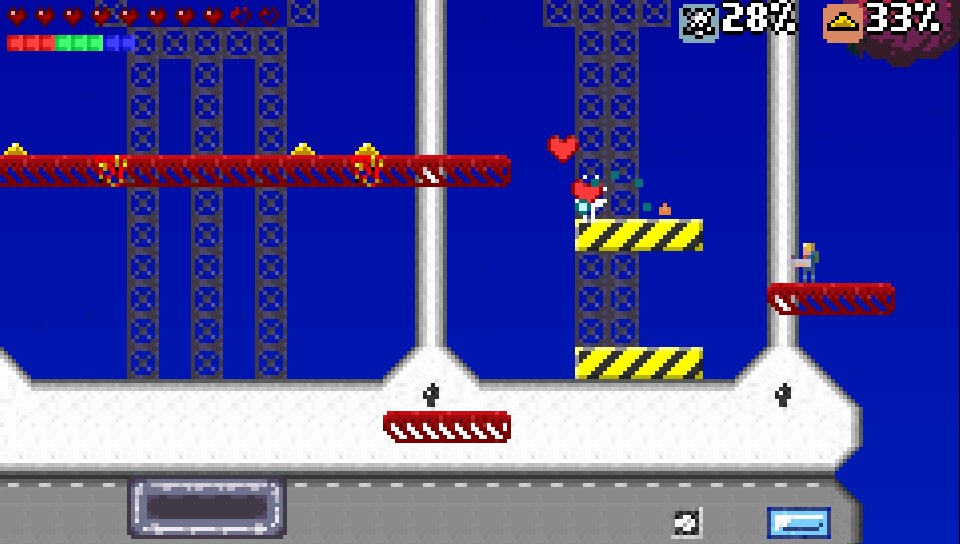 When I play any kind of shooter I want my guns to feel powerful and exciting, unfortunately Blasting Agent: Ultimate Edition has you firing what feels like a pea shooter, bullets are weak and don’t travel any distance.  In fact I’d say until you’ve invested good time in searching for the upgrades your gun is near useless. The basic upgrades are here for spread, distance and damage, and as you play these stack to make your gun progressively stronger. Compounding the weak gun you start with are some egregious examples of bullet sponge enemies, who are often more mobile than you are. At the start of the game  I was left wondering if my gun was even working.

This is not an easy game and death comes quickly and repeatedly, every encounter feels like a challenge.  The enemies also feel designed to frustrate as some can move incredibly quick making them almost impossible to hit, whereas others can shoot you from a distance which is just outside your starting gun’s range.  Given that each one of these enemies takes multiple hits to destroy you’re left with a game which is crushingly difficult even before you reach the boss of level 2. 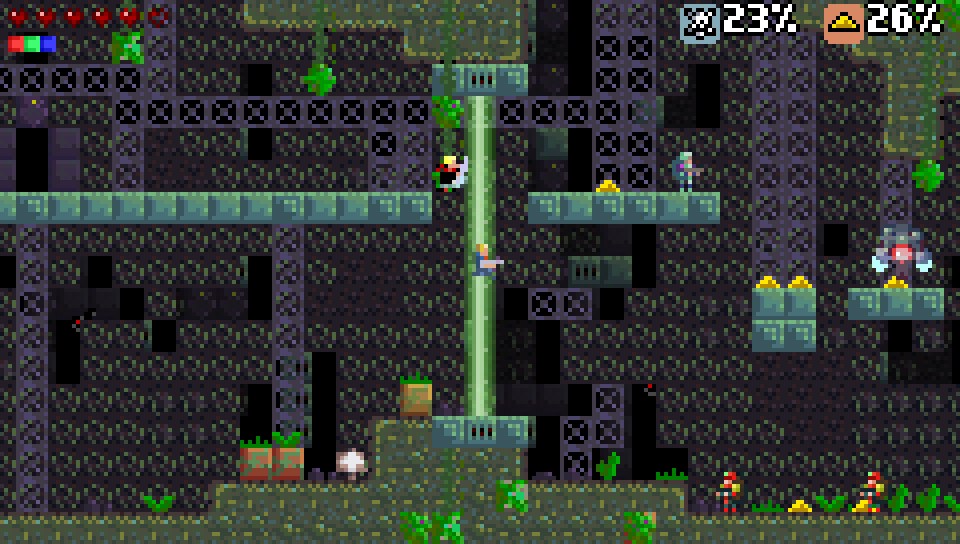 One of the better aspects of Blasting Agent: Ultimate Edition is the level design.  Each of the six levels is split into smaller checkpointed zones.   Death in any of these zones resets you to the beginning of that area and the death respawn cycle is thankfully quick.  There are also no lives which is a blessing given the amount of times you’ll die, so there are some good design choices being made. Graphically though things are pretty standard retro indie fair, with some slightly better work on the boss designs. Whilst the levels play ok there is nothing particularly special about them meaning it’s hard to remember any stand out  aspects of a zone. There are collectibles throughout the missions and if you manage to get them all you’ll get a special upgraded ability to use in future levels.  It is a neat feature and one which makes you search the levels for hidden secrets, in fact it is almost essential to progression given the difficulty.  It is a shame this upgrade system isn’t signposted better, being mentioned only passingly on a sign in the first level, as it is easy to miss it and make the game tougher for yourself.

When I first started Blasting Agent: Ultimate Edition I was left wholly underwhelmed by the lack of any real tutorial and harsh difficulty. However, an odd thing happened, I defeated the second level boss and upgraded my gun a bit and it all sort of started to click. This is not a great game and there are some substantial flaws with the difficulty spikes and weapon upgrades, but it is strangely addictive and also cheaper than what you’d pay for a decent coffee.  It all works as expected and I did enjoy my time, I’m not sure I’ll be going back to it but there is no getting away from the fact it plays a decent game.

Blasting Agent: Ultimate Edition
6 Overall
Pros
+ Plays a decent 2D shooter game
+ Costs £2.49, less than a good coffee
+ The upgrade cycle is well thought out
Cons
- It's bloody difficult, particularly at the start
- Your gun feels like a peashooter until upgraded a lot
- Lacks any kind of decent introduction or front end
- The boss of level 2 is crazy hard
Summary
An unashamedly retro platform shooter with a harsh difficulty curve, Blasting Agent: Ultimate Edition manages to play a solid game. Whilst this isn't going to set the world alight, if you can get over some substantial difficulty spikes, it is strangely addictive and also cheaper than the price of a decent coffee.