From longtime developer Rainbow Studios and publisher THQ Nordic, comes the latest iteration in the venerable MX vs ATV series that we first encountered back in the Xbox 360 days. We guess that they’re running out of suffixes as we’re greeted by MX vs ATV Legends this time. At least they’ve not gone down the Capcom route of stupid stuff like random strings of Greek alphabet letters. Though technically this should be MX vs ATV vs UTV Legends, but that’d be confusing to the average punter we guess.

Sadly for a series we’ve really enjoyed in the past, we’re a little baffled as to what’s gone wrong. The bar has been raised by its competitors, namely the MXGP series with its focus on real world locations and riders. Additionally, the lack of any presentation at all with regards to the career mode is a baffling thing. Perhaps that speaks of the lack of any particular licence, rather than this franchise hoping to get by on its prior games alone. 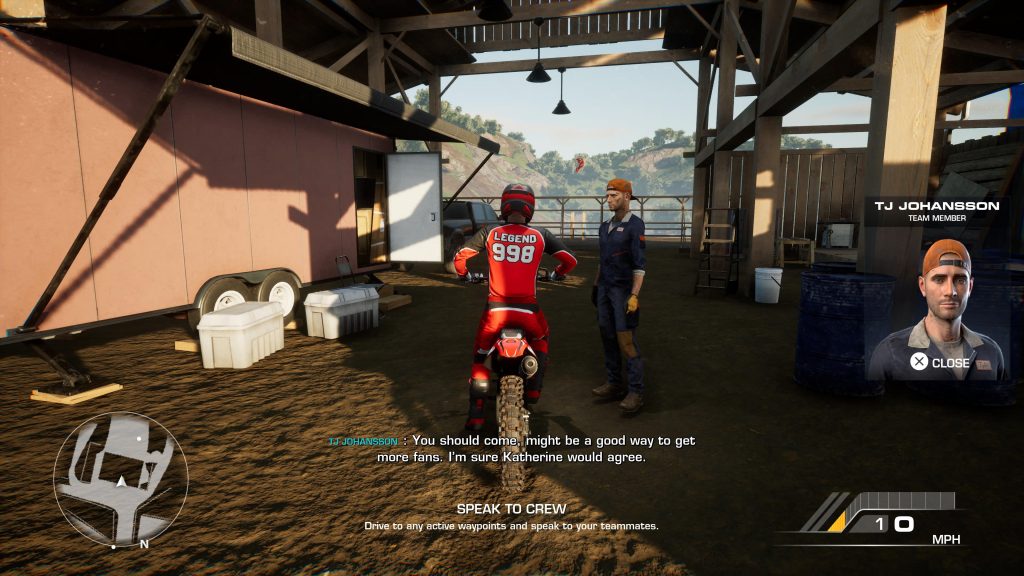 After an entirely unskippable and pernickety tutorial phase, broken down into an introduction to steering with the left stick and leaning with the right as well as clutch control, you’ll find yourself in a familiar looking hub area. That is, familiar to anyone who’s ever played an MX vs ATV game before as we have. There’s more unskippable tutorial nonsense, admittedly introducing how to brace for jumps and stunts and the like. You’ll be left to it to explore, by doing so you’ll discover collectible nebulous spinning tokens floating in mid-air and in the middle of lakes, seemingly impossible to reach.

Then with an underwhelming shrug of sorts, you’ll be told to sorta get on with it. Literally hit start and choose the campaign from the menu. Nary a fanfare other than a short video to introduce matters. Ah, the video. Remember the Dreamcast? That was when DVD was a new format and digital video was a miracle in any form. MX vs ATV Legends uses Bink Video. Yes, Bink Video once of Rad Game Tools. Only rather than on 320*240 videos on Dreamcast and PS2, we have single figure framerates on PS4/PS5. It really isn’t a great look. 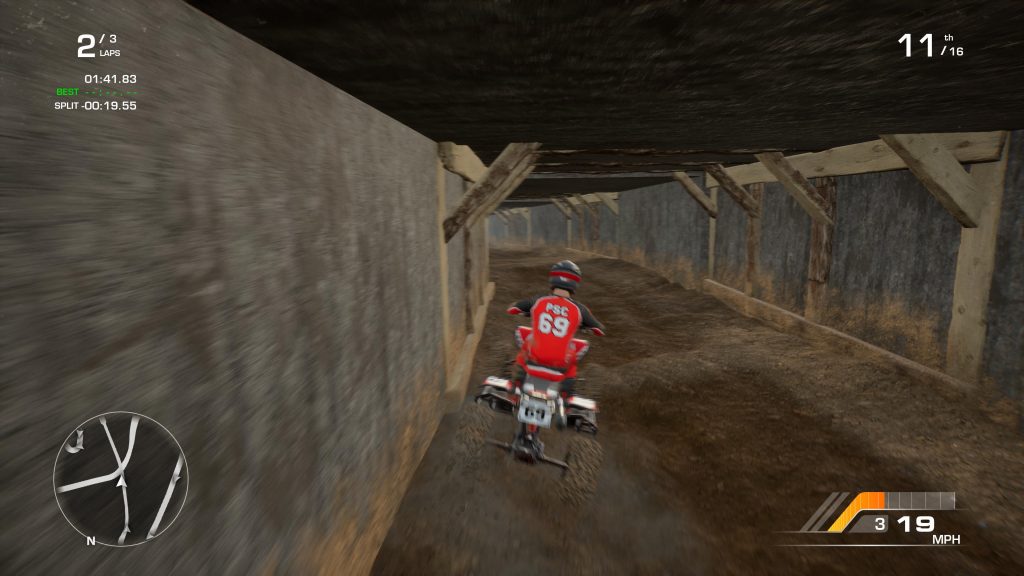 The only reason we can conceivably see for this codec to still be used is that the licencing fees are low. We don’t even know if the intro video depicts the game we’re playing. For all we know, it could be canned video from a prior installment. It saves having to script footage for an in-game engine cutscene we guess. We doubt the engine would cope though.

You see, the engine is almost as much of a car crash as the Bink Video implementation on display here. During the initial flyby before a race begins, the framerate visibly chugs. Not to mention the graphical fidelity wouldn’t look out of place two console generations ago. Pretty this isn’t. If you’re lucky, you’ll have got to this point without a crash to the XMB. The lens flare is pretty enough, if not a little Michael Bay.

As well as your ability to inexplicably wreck on the smallest of bobbles, you’ll likely face MX vs ATV Legends deciding enough is enough and booting you out altogether. The first time it happened, we innocently changed our vehicle from a motocross bike to an ATV. We put it down to an unfortunate bug in pre-release code. Only things didn’t improve much when patch 1.006 deployed in what we can only assume was a just-in-time deployment ahead of launch. If anything, they got worse. Simply choosing the campaign was enough for a crash. 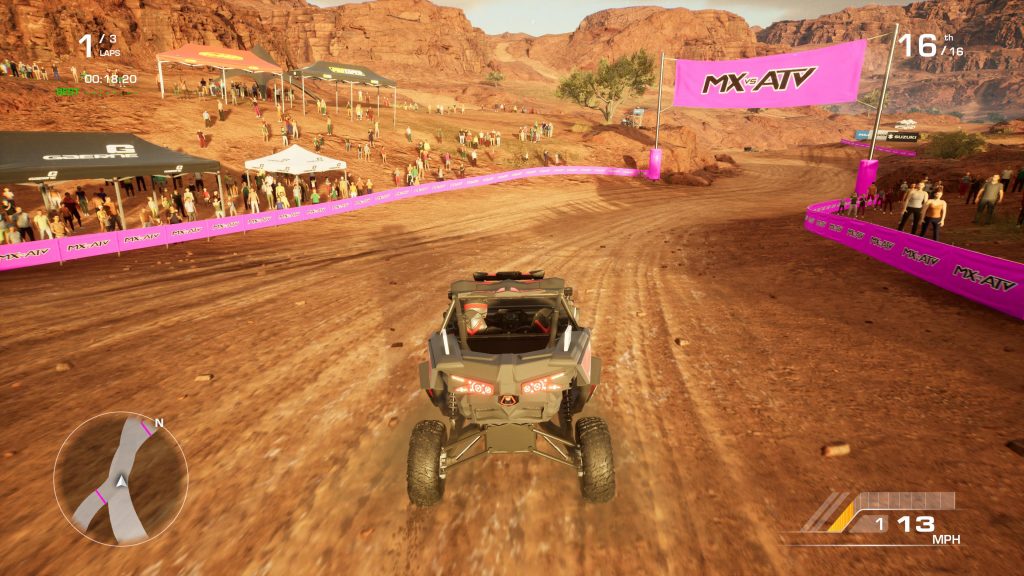 We put it down to our console, even going as far as doing the cache clear and database rebuild Electric Boogaloo, but no, still it crashed. We tried the PS4 version on our alternate profile, not particularly relishing the 25Gb download. Anything being preferable to the delights of a crash from so much as a passing breeze. That seemed a little more stable but was still subject to the same issues we’d previously encountered. This prompted us to give the benefit of the doubt to its PS5 sibling which at least didn’t crash, though our curtailed play session may have reduced the odds of that happening.

The meat of any racing game is in the racing, funnily enough. It’s at that point that MX vs ATV Legends threadbare lack of substance begins to show. Track design is insipid at best and AI behaviour is best described as agricultural. Remember when Microsoft introduced what would eventually become Drivatars in the Forza series? Well, those guys are Deep Blue beating chess grandmasters compared to the AI drivers evident here. We dropped the difficulty level down to see if it made a discernible difference. None was evident, their using you to brake into corners was still very much at the forefront. 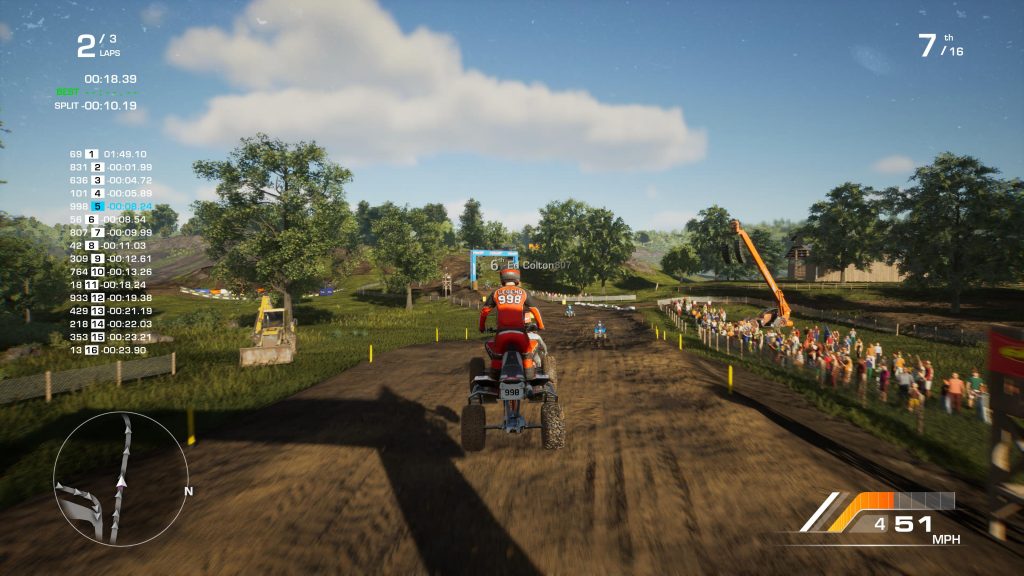 Regards the track design, there’s no flow. You can be in a groove, having seen off the AI riders, yet for no fault of your own find youself off-track and resetting. It’s hugely jarring and often the difference between winning an event and placing a long way down the field.

That in itself presents another problem. You’ll be sitting pretty in first or second place. Then inexplicably, you’ll find yourself losing places for no apparent reason. Another unwelcome bug manifests in the form of being arbitrarily stuck in gear. We had first gear in a UTV race and second gear in an MX race. There’s no damage model apparent that causes this, though the unexpected wrecks could be indicative of a botched implementation during development that was pulled. 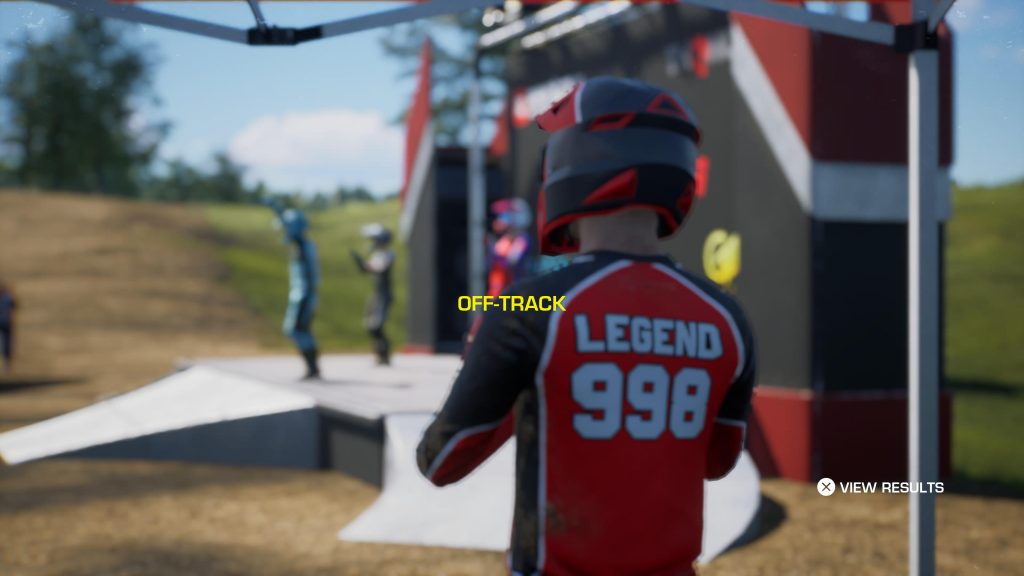 Everything being as it is, we found it very hard to derive any particular sense of fun from playing the frankly wretched effort that is MX vs ATV Legends. The races lack pop and any real feeling of urgency. If you lose a position, you’ll find yourself shrugging and glad that your suffering will soon suffer the sweet release of a race finish. When you do finish, the game simulation just keeps on trucking, even down to showing OFF-TRACK during the podium presentation. It’s all very sloppy.

Heck, we’re exhausted just typing this. MX vs ATV Legends is a subpar effort that is the very definition of a developer resting on its laurels. Just like the Tour De France games, someone must be buying this series or they’d not be getting churned out. We reckon it’s the French or some far-flung country in central America where they’ve only got CRT TVs and this game is the epitome of sophistication there. But for us, we played it so you don’t have to. We’d rather play Mudrunner for eternity than suffer another moment of this game. Consider us well and truly burned with regards this series. Avoid. 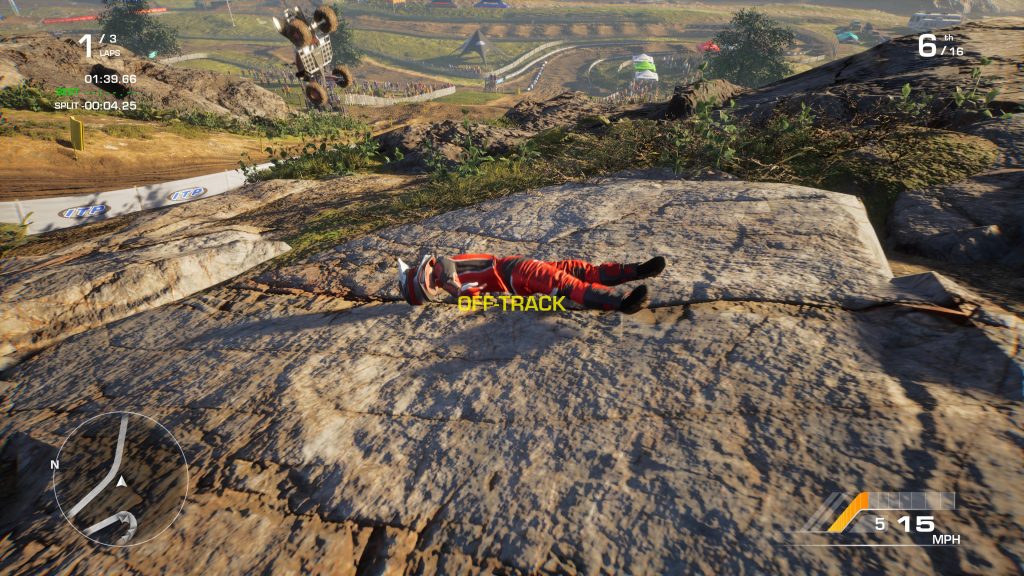 As a footnote of sorts, just before we published this review, we turned on our PS5 and noticed the 1.007 patch was downloading. If nothing else, it shows that the developers are taking steps to address the stability issues. Some bugs still persist, such as getting stuck in first gear for no apparent reason. Hopefully this will get to a state where it is playable, but at the moment, we’d recommend you steer clear.

Cons
- More unstable than the number four reactor at Chernobyl
- Overly aggressive AI racers, even on lowest difficulty
- Buggy to a fault and riddled with performance issues
Summary
MX vs ATV Legends is a shambling corpse of a game struggling along on life support. How it passed testing and got approved for release is anyone's guess, but we figure THQ Nordic probably release so many games that the Sony approval team will rubberstamp literally anything these days. Don't bother, we really wish we hadn't. This series is effectively dead to us now. Hopefully it’ll be patched to a playable state, but at the moment it simply isn’t.