Sometimes I’m in the mood for some bite-sized and simple. More Dark by HugePixel fits that bill. With dozens of relatively quick puzzles, this teaser looks to put players’ problem solving to the test. With a couple of tricks up its sleeve, this cheap platformer is enjoyable to play through but lacks a more long-lasting appeal. 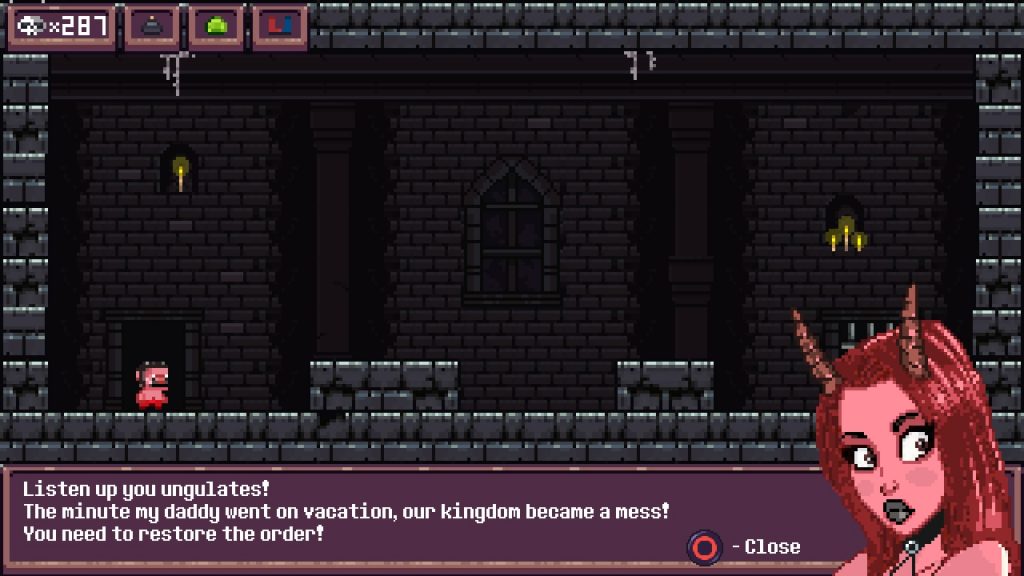 In terms of story, More Dark barely has one. It has a premise and leaves it at that. Satan’s away for the weekend and the dungeon’s a mess. It’s crawling with humans and it’s your job, as a squat demon, to clean the place up. The goal in each puzzle is to dispose of the humans whilst also finding your way to the exit.

More Dark is mechanically very simple. You begin with a basic jump and other obstacles are introduced slowly. Progression leads to upgrades such as a double jump and bombs and the puzzles raise in complexity as you delve further into the game’s dungeons. With each trial being displayed on a single screen, it’s fairly easy to take stock and decipher what you need to do. Each upgrade behaves in a specific, controlled manner and usually only has one purpose. Movement feels snappy and responsive and the controls feel consistent. 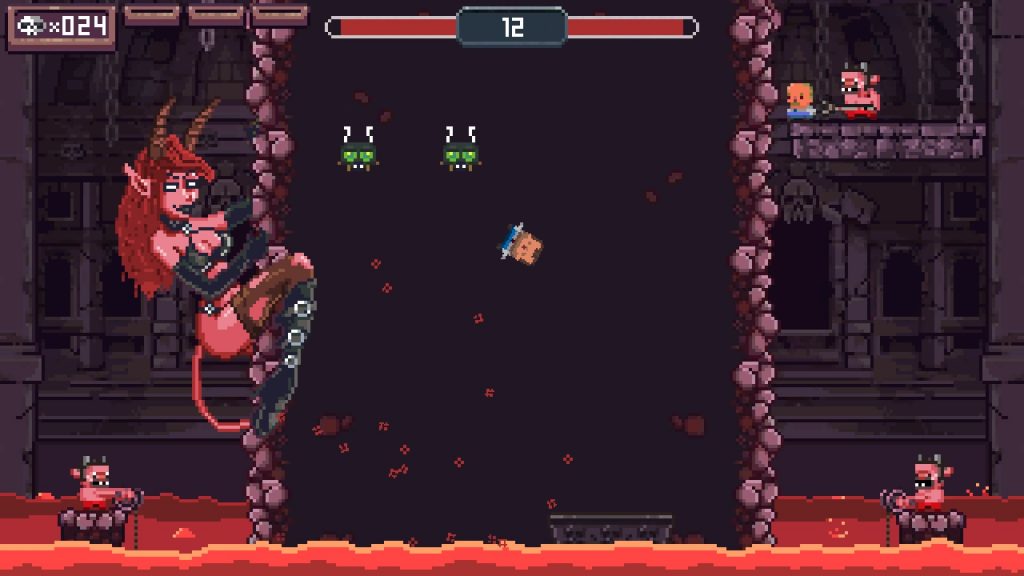 The first 20-30 levels seem to fly by as new items are handed to you and bosses are introduced. The first third has a lovely flow that isn’t hindered much by the game’s initial difficulty. More Dark even has time for some nice diversions. Bonus stages take on the shape of arcade classics like Arkanoid and Space Invaders. Again, it keeps things simple but things like that helps break up the barrage of puzzles. It’s where the game’s more charming moments lie.

As easy as the beginning seems, the game does ramp up in challenge after the double jump and bomb is given to you. I find myself thinking ahead and then trying to execute on an idea. Jumps began to require more precision and understanding how different upgrades work felt key to beating puzzles. At times it can frustrate, especially when it was my execution letting me down. The game does allow for quick restarts, thanks to a handy suicide button. 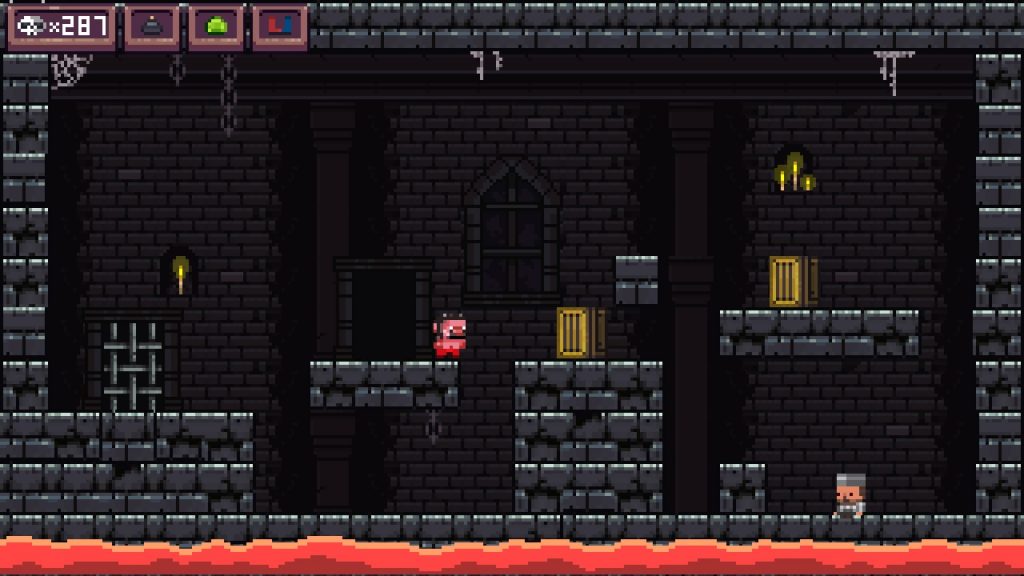 As an overall challenge, it’s not too tricky. You definitely have to make use of all your tools as you close in on the climax. There’s a nice, consistent logic to the puzzles and I find myself pondering on a new screen and deciding what platforms and items are needed to progress. They’re satisfying to figure out. I’ll admit I did wonder how quickly this game would belt by but the second half definitely sees sterner tests. It builds although never truly strays into brain-melting territory.

Whilst I feel puzzles have one distinct path to success, some obstacles like boxes appear there as spares or red herrings. That does seem to imply there’s room to experiment but the size of the rooms indicate you’re going with one route to victory.

Presentation is kept traditionally retro. The music and visuals are all in a 16-bit style that, whilst charming, has been seen plenty of times before. Animations are kept fairly simple and the blocky character designs don’t do a lot to inspire a second glance. Deaths do come with an explosion of viscera but it’s a style that’s well worn. It’s not bad but not something that really grabs my attention. At least with the simple geometry, you can easily gauge the range of your little devil’s movement. 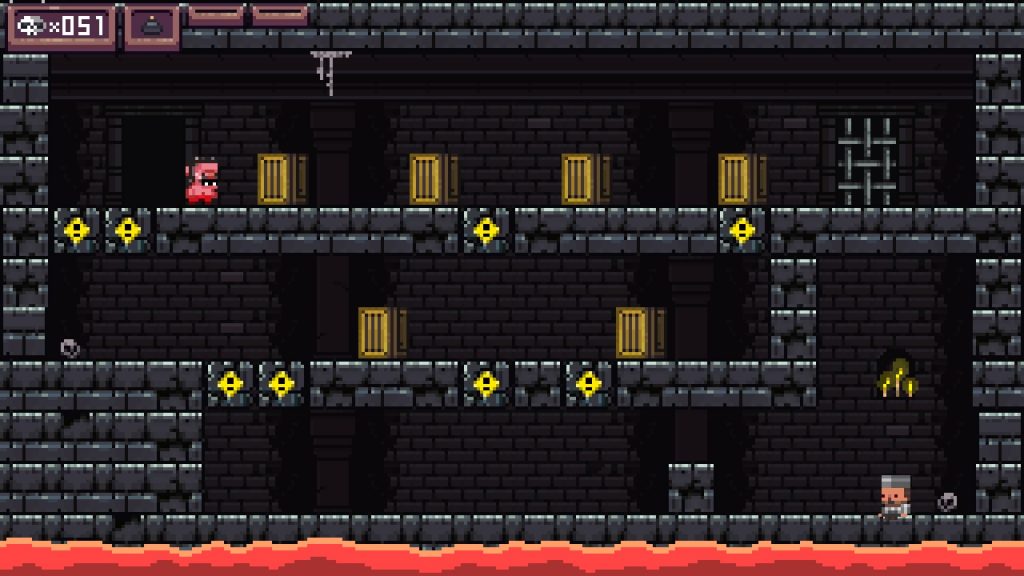 The musical score fairs better. It provides a decent underscore to the action. It’s not overpowering and just gives you something to listen to in the background. Music changes fairly often so you’re not tied to the same track if you’re struggling with a certain challenge. It acts as nice ambience and keeps the pressure of when you’re trying to find a solution. Pleasant.

It’s a shame I don’t have much else to say about it. Playing through More Dark feels like flicking through a book of puzzles. It gives my brain a workout but there’s not much substance on the periphery. It’s cheap but won’t really live long in the memory. You can revisit old puzzles but there’s little to encourage that. Admittedly, returning to previous puzzles with your new upgrades can be a cathartic experience, but nothing much beyond.

Summary
More Dark is a tight little puzzler that lacks some punch. Mechanically, it's interesting and really lets you use the most of your tools at the climax. Unfortunately, the presentation is basic and doesn't draw much inspiration. It's a short experience and whilst there are secrets to find, I struggle to find an incentive to do it. If you're in for a decent, short effort to stretch your grey matter, it's alright but it won't live long in the memory.