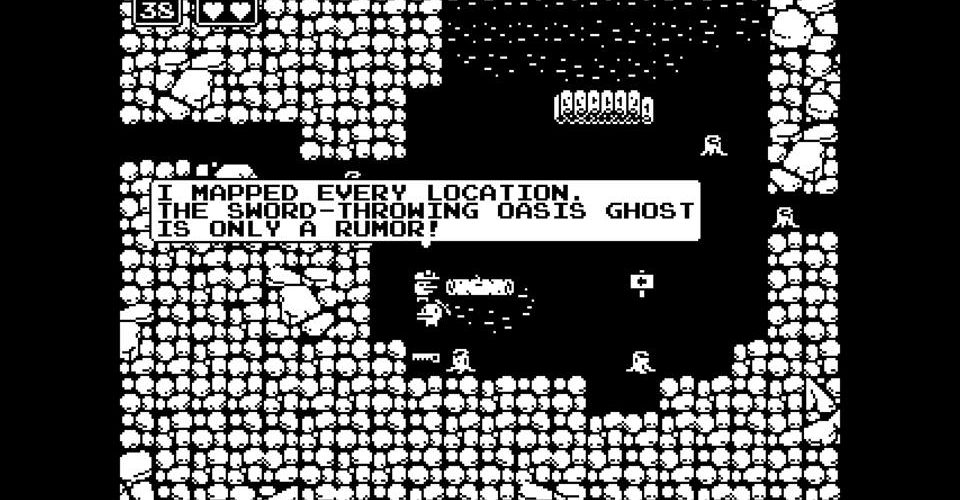 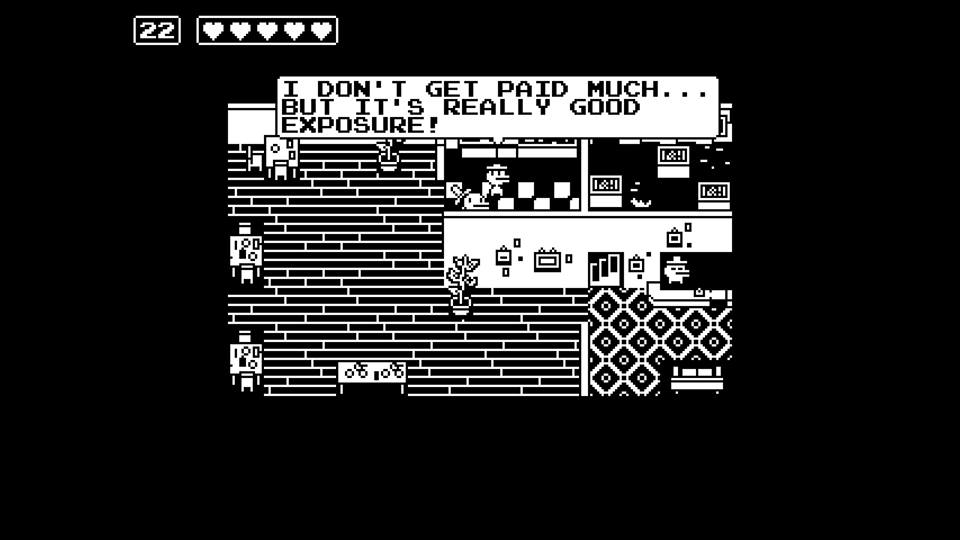 I have spoken at length about my feelings on retro aesthetic games from independent developers. Oftentimes they can feel that they try to ape the look of an eight or sixteen-bit title while completely ignoring the shortcomings and quirks that made those decades of gaming feel so appealing. Often, they are extremely lo-fi, which feel like they are understating the quality of previous titles and focus far too much on inciting nostalgic feelings while contributing little with substance of their own. On the surface, Minit looks like it could fall into that trap. However, after diving into the world and playing from start to finish in a single sitting I can gladly say that it surprises more than most.

Minit has one of those ‘annoying on paper’ hooks. You star as a minimalist duck faced dollop who after finding a sword on the beach near his/ her house is cursed to sixty second lifespans. What unfolds from this point is an adventure that must be solved minutes at a time as your character has to interact, fight and rescue the various charming inhabitants of the world. What should be the most annoying mechanic in the world happens to be the main draw of Minit for me. While it may seem restrictive and makes the game mostly about trial and error, there is a notable sense of satisfaction as you find your way through each area and solve a mini milestone while racing against the ever present timer. 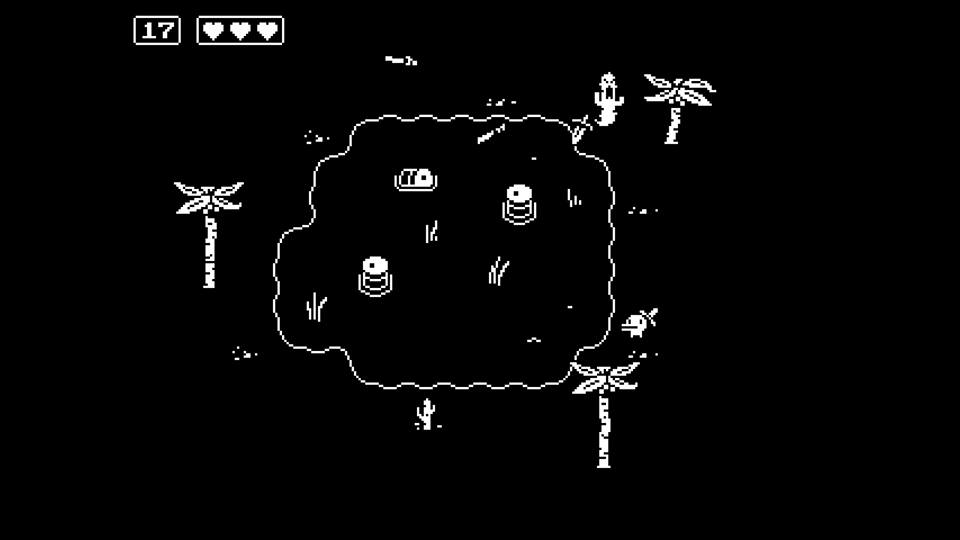 The most satisfying thing for me when playing Minit was trying to push the amount of actions i could perform in a single lifespan. Exploration is a key aspect of the game that makes your next lives that little bit easier. Taking cues from Rogue-likes, Minit sees you opening shortcuts and checkpoints as you progress, allowing you to stretch those minutes out while also creating pathways to new areas as you go. As a result the game world feels connected and allows you to use newly picked up items on older areas of the game to progress further. For example, the sword you get at the start is useful for cutting grass, however after a small quest it can be upgraded to cut down trees that block your path, this then opens up shortcuts to previous areas, allowing you to obtain secret items and currency for other puzzles.

The only thing that lets Minit down slightly is it can sometimes fall into the trappings of the adventure genre, in which you find yourself stuck and having to essentially rub every item you have against everything just to try and progress. With the sixty second mechanic this can get a little frustrating as you don’t get much chance to try all of your tactics in one go, but i can count the amount of times where this happened on one hand, so this is not all that much of a quibble. 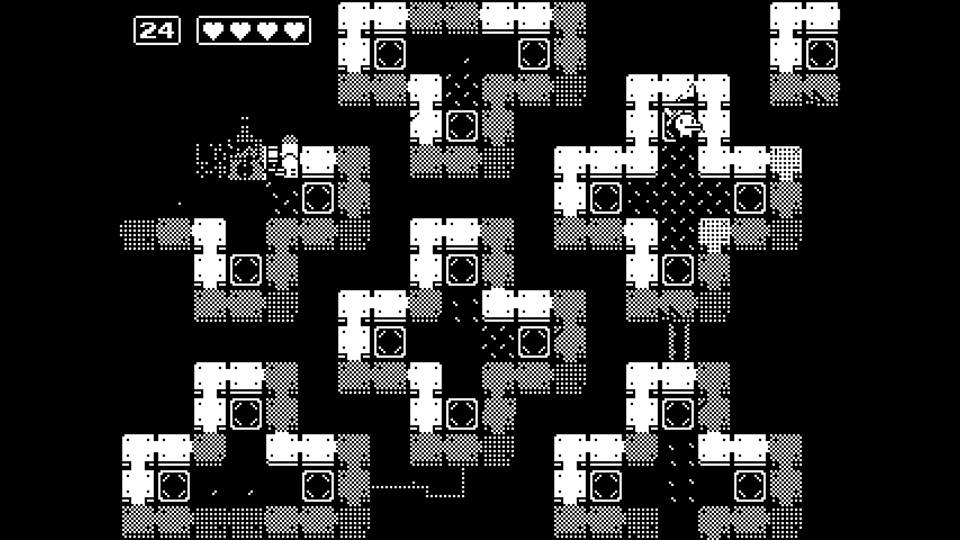 Aesthetically, Minit has a beautiful look that has a similar style to Undertale or Downwell. Its incredibly minimalistic, however it evokes a charm that high budget AAA titles cannot. The inhabitants of the world each have their unique quirks to them and while everything is black and white, the themes of the surrounding areas are beautifully clear. This is all backed up by a muted, yet fastpaced soundtrack that both gives personality to each section, but also reinforces the strict time limit that you are faced with each passing life. It comes together beautifully.

Minit feels like a series of pocket adventures and in my time playing through there were nothing in the way of walkthroughs, so feeling through the game, discovering and solving the various puzzles brought back those satisfying retro vibes, reminding me of when the internet wasn’t as common or cheap as it is now. The game is recommendable on this basis alone. Very few retro aesthetic indie games evoke that need for determination to progress and while Minit is a short game, it feels so moreish that i couldn’t help but try and tackle further playthroughs in the challenging new game+ mode that changes placement of enemies and tasks, making the challenge of completing them harder in the time frame.

Devolver Digital have always been great at sourcing great little indie games that surprise, Minit is yet another in their already impressive portfolio of gems. If you fancy a fun, short game with oodles of charm then this is a good one to sink a few hours into.

Cons
- Sometimes the next steps to take feel a bit too cryptic
- New Game + feels incredibly daunting compared to the main game
- Feels a bit too much like a “one and done” experience.
Summary
Minit is a short game with a great hook. The sixty second lifespan mechanic is surprisingly fun to get to grips with and the game world oozes charm from the moment it begins. If you are looking for a new hidden gem, then this is the one.

One thought on “Minit – PS4 Review”