Maneater is a mid-budget shark ’em up from US-based devs Tripwire Interactive who are best known for their Killing Floor titles.  Set in the fictional locale that is Port Clovis, you play as a shark who is looking to dominate the waters as the local apex predator while also hunting down the man who killed your mother.

This is all set up with a reality TV styled show cutscene where a camera crew are following Scaly Pete, a legendary shark fisherman.  At the start of the game he captures and kills a shark (a fully powered-up adult shark that you get to play as for the purposes of the tutorial).  As he begins to gut it, he realises she is pregnant and as he holds the newly-born baby shark (Push Square already made the joke but yeah it’s stuck in our heads now too) it chomps off his right hand and leaps into the water. 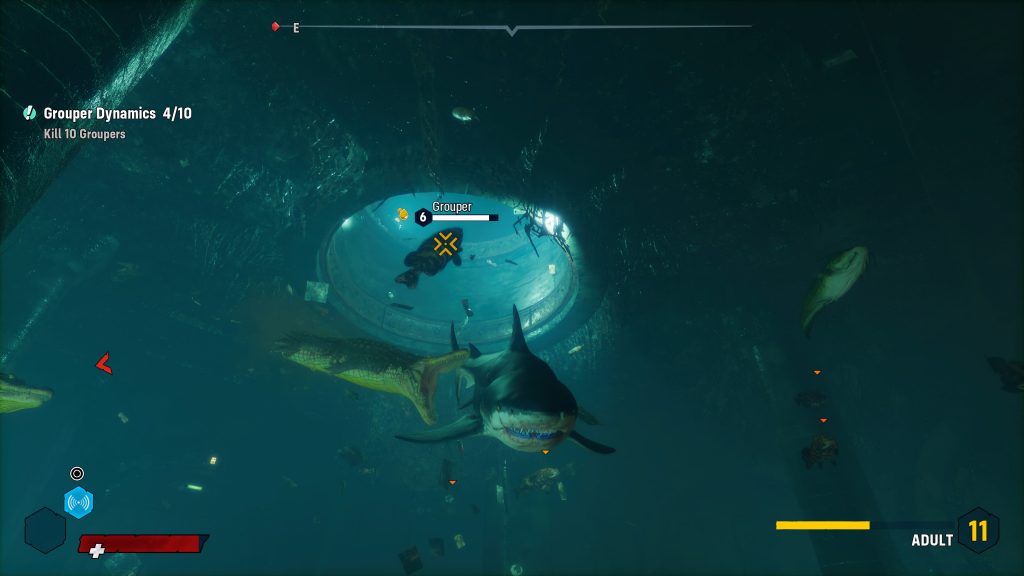 You play as that shark.  Initially, your main concern is eating smaller fish.  The protein and other nutrients you get from them helps you to grow, essentially leveling you up.  Tripwire describe the game as a ‘shark RPG’ which isn’t particularly accurate but yes you level do level up and you do gain new abilities as you go.

To level up quicker you’ll need to tackle the game’s story missions and other objectives.  The game’s open world is split into eight areas and each one has a selection of collectibles to find, tasks to complete, bigger fish to take down and shark hunters to eat.  These all help you to level up and you will need to because the first few hours of Maneater are tough. 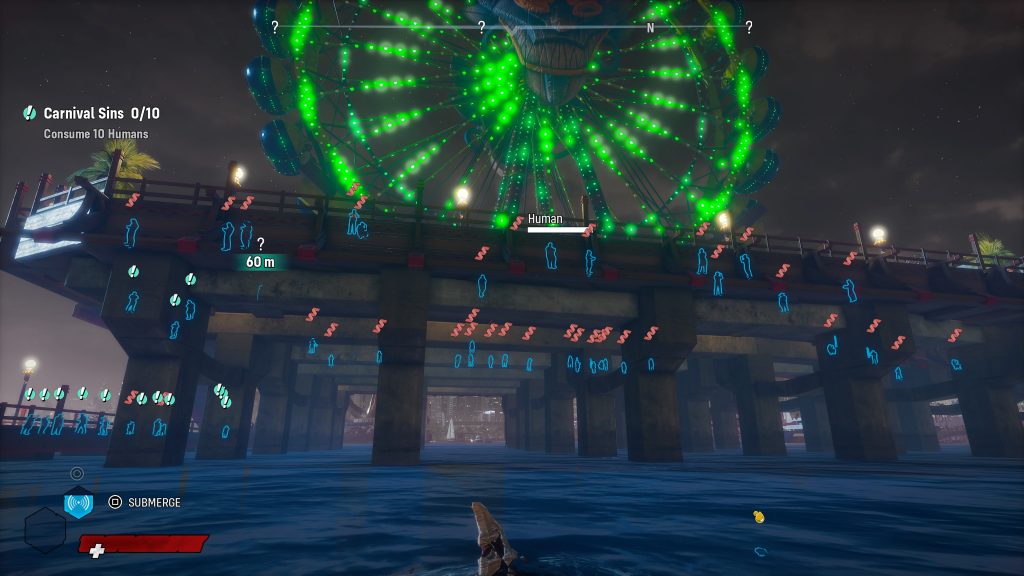 The first area tasks you with taking down some level 15 alligators and these are usually backed up by level 8 ones.  These are a problem for you as a fledgling shark.  At first we felt somewhat defeated by them as they effortlessly destroyed us time and again.  The way to beat them is to get in there, get a few bites in with a carpal tunnel inducing barrage of

presses, evade them with the rather awkward

button and then retreat when they start to get the better of you.  Killing replenishes your health, so you’ll want to swim away and eat a few groupers or whatever other fish you can find and then come back and finish the job.

This isn’t helped by the game’s camera which stays behind you as you spin and flip around in the water and the fact that at first neither the normal or inverted controls seem to feel right.  Conveying the movement of a shark is no doubt tricky but initially the controls here feel like a struggle.

It’s tough.  Taking out a level 8 alligator at this point is no joke, let alone a level 15 one.  However, due to the game’s slightly poor signposting, we didn’t realise that the second area was open to us (with good reason, the map doesn’t show that there are entrances to other areas) and so we cleared out everything in the first area, leveling up as we went. 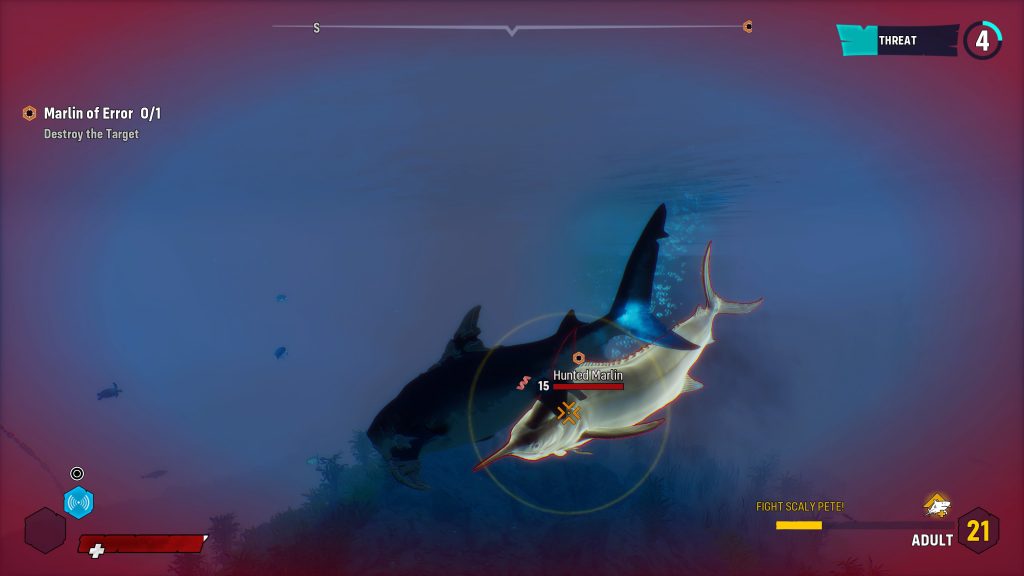 That combination of being well-leveled up and the School of Hard Bites approach to those early alligator battles meant that when we did eventually beat the first area, we were a little overpowered for much of the rest of the game.  However, there were still some tricky moments, usually involving the human shark hunters who come whenever you chomp too many swimmers but as you start to get more powerful, and get used to the controls, you do start to feel like an absolute badass.

As the world opens up, you’ll meet various other threats.  Baracudas, hammerheads, great white sharks and more will challenge you mindlessly no matter how many of them you tear apart but as you continue to level up you’ll get new abilities which will level up your attacks and defence and will offer new mutations such as bony armour or bioelectric teeth.  These are fun to obtain but they do make the game easier and easier until you truly do feel like an apex predator.  Going back to the first area and tearing through those alligators is fun though. 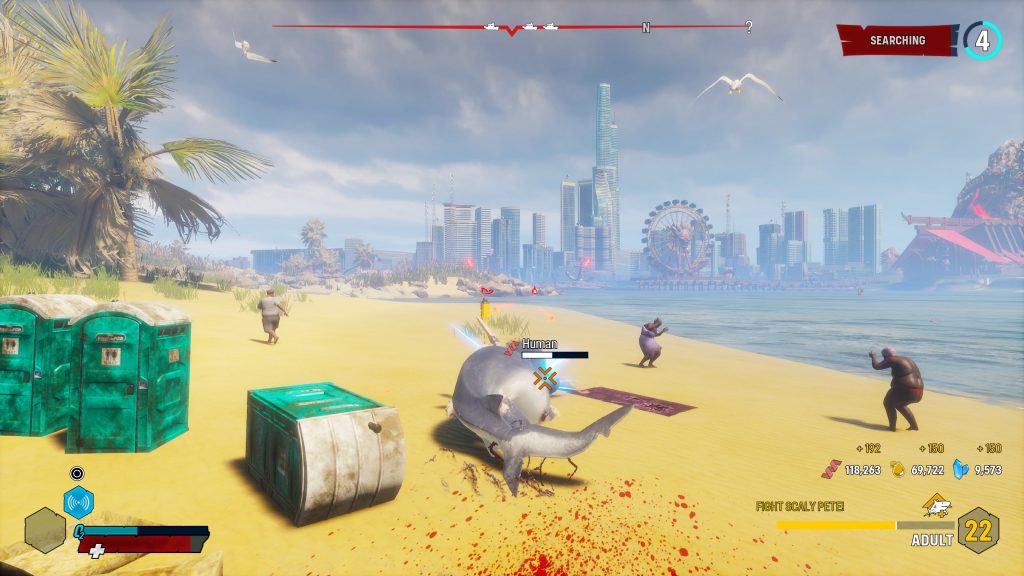 Aside from the killing, the game does also focus a lot on collectibles and quite a few of these are on land.  Luckily, your shark can leap out of the water and onto the ground where you can jump and flail enough to reach them.  This is obviously a bit ridiculous but blends in well with the game’s sense of humour and adds a bit of variation to the swim and kill gameplay.

So while the difficulty curve is definitely a bit off, let us tell you about everything the game gets right.  Firstly, the game world itself is great.  The size of each area and the entire world is perfect.  It’s large but not pointlessly large in a stupid Just Cause or Far Cry/Assassin’s Creed kind of way.  Think of it more like Bully where there is plenty to do and see but not set in five hundred square miles of bugger all.  That makes it more appealing to chase down those collectibles and have fun exploring. 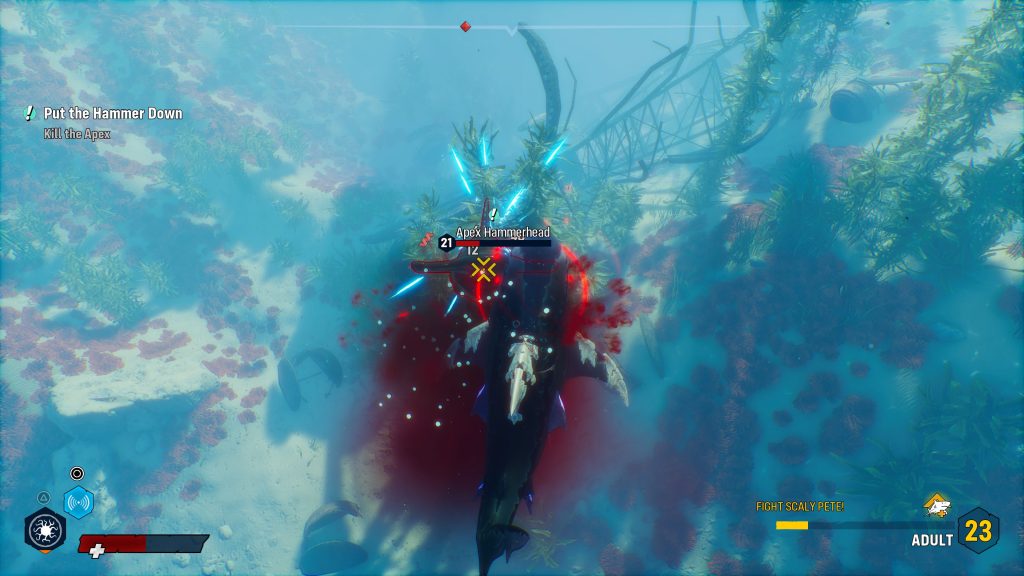 The gameplay is a little repetitive with only a few types of mission (usually hunting a target or a bit of population control on smaller species of fish) but, once you get used to the controls, the combat is fun and pretty wild.  Each area has an apex predator there that will challenge you after you complete all of the missions there and these battles tend to be the most enjoyable, especially the more difficult ones.

It looks great too.  Each area has its own distinct feel ranging from quiet areas where there are no people to worry about, polluted industrial zones, party towns and the luxury beachfront areas and they all look really nice with lots of detail and lovely water effects.  We’re so used to reviewing pixel art roguelites around here that to get a premium looking game is definitely a treat for the eyes. 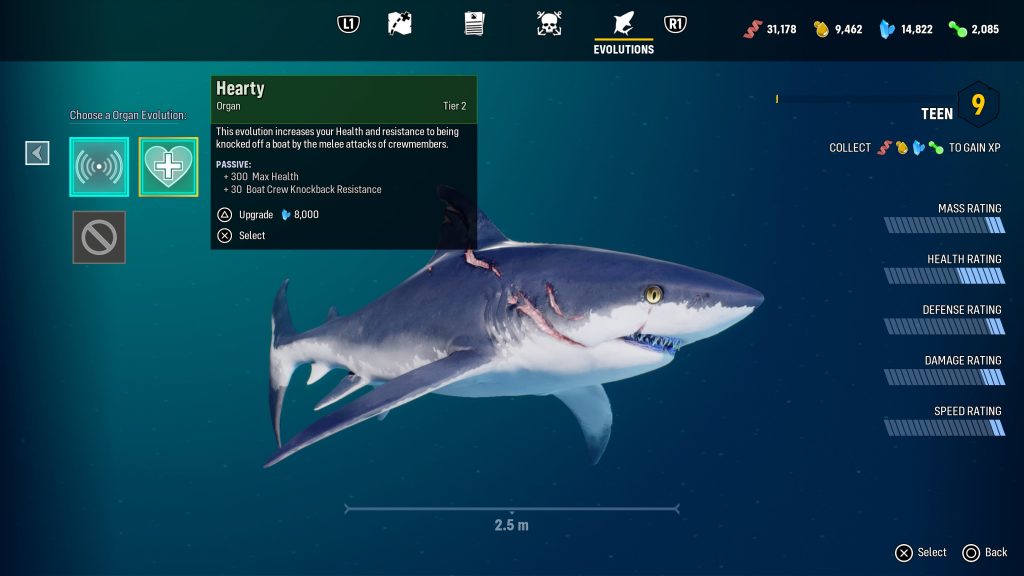 The audio is great too with good voice acting in the TV-style cutscenes and some fantastic narration by Chris Parnell (from Archer and 30 Rock).  The game definitely has a sense of humour with Parnell’s one-liners really adding to the charm.  In fact the silliness of the whole thing makes this far less like an RPG and more of a ridiculous sandbox title like Goat Simulator, especially when you start flapping your way around an island in order to chomp a dozen partygoers.

Maneater does well to not overstay its welcome.  It may be too short for some, you’ll get three or four days out of this one depending on how much of a completionist you are, but we’d rather that then spend 300 hours here.  Ultimately this game achieves what it sets out to do by giving us a wholly original game that is funny, enjoyable and addictive but one that understands its limitations and ends before it starts to feel like a grind.

Maneater
8 Overall
Pros
+ lovely visuals
+ great humour
+ addictive gameplay
+ good-sized world
+ definitely makes you feel like a badass shark
Cons
- gameplay loop is a little repetitive
- controls are a bit of a struggle
- the camera doesn't always help
- difficulty curve is very front loaded
Summary
Maneater mixes ferocious combat, addictive exploration and great humour into a perfectly-sized open world where you play as a murderous shark. It's the game we never knew that we needed.