While any arcade puzzle title that isn’t Tetris tends to feel like a bit of a Johnny Come Lately kind of effort, it’s easy to forget that Lumines has been around as a series since 2004. Tetsuya Mizuguchi’s music-laden take on the falling blocks type of puzzler has had quite a few outings over the year but never strays far from the original formula and that’s the definitely the case with Lumines Remastered which adds very little to the gameplay fans already know and love.

As with Tetris, the basic idea with Lumines is that blocks drop from the sky but in this case they are always 2×2 squares.  Each individual section of the squares can be one of two colours and your job is to rotate and move them in order to position them on the playing field so that you create 2×2 blocks of one colour.  Solid 2×2 squares of one colour are then removed with blocks above dropping into the space that they leave while a few points are added to your total.  However, if you let the blocks reach the top of the screen then it’s game over. 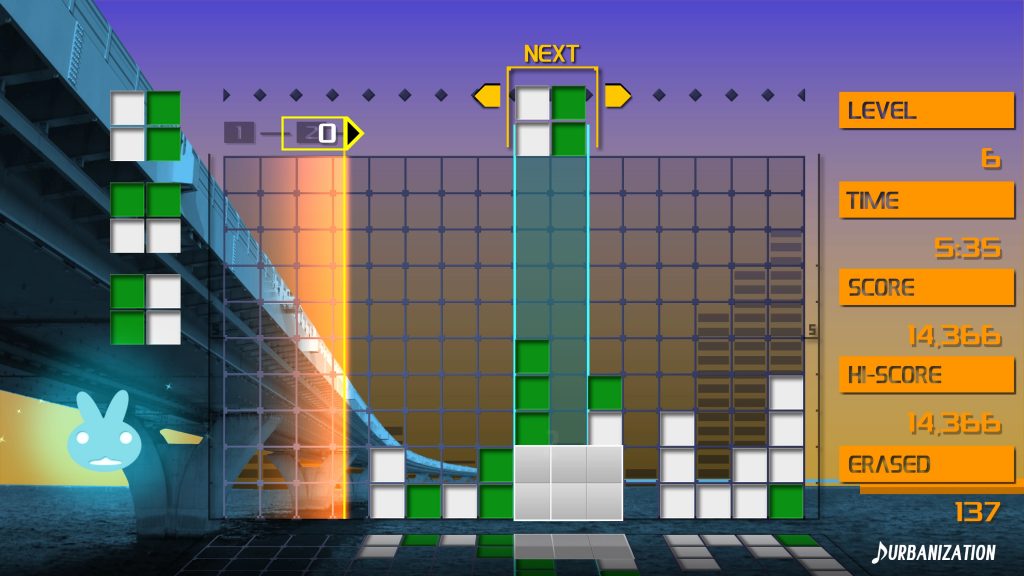 Over the years I’ve struggled with the absolute simplicity of that, favouring games like Chime where there is a bit more of a structure to things but Lumines has always been a good chill out puzzler and the excellent PS Vita entry Lumines: Electronic Symphony  remains one of two physical games that I’ve kept because it never leaves the card slot on my console.  So when Mizuguchi announced a PS4 entry for the series, I was pretty interested.

It turns out that this game is pretty much a straight forward take on the usual gameplay.  It plays exactly as expected with the easy to pick up puzzle action being something that any gamer can figure out.  If you can play Tetris or Columns then this will click immediately with you.   Where Lumines Remastered adds its magic is with the presentation.  As you’d expect from any Mizuguchi game, music is front and centre here with the game offering  a heap of electronic music that’s either chilled, bombastic or somewhere in between and usually it fits the gameplay quite well, especially as any blocks you clear create sounds that fit the music, giving the gameplay and sound a connection, much like you had in Mizuguchi’s masterpiece Rez, although we stop short of buying into that whole synesthesia thing. 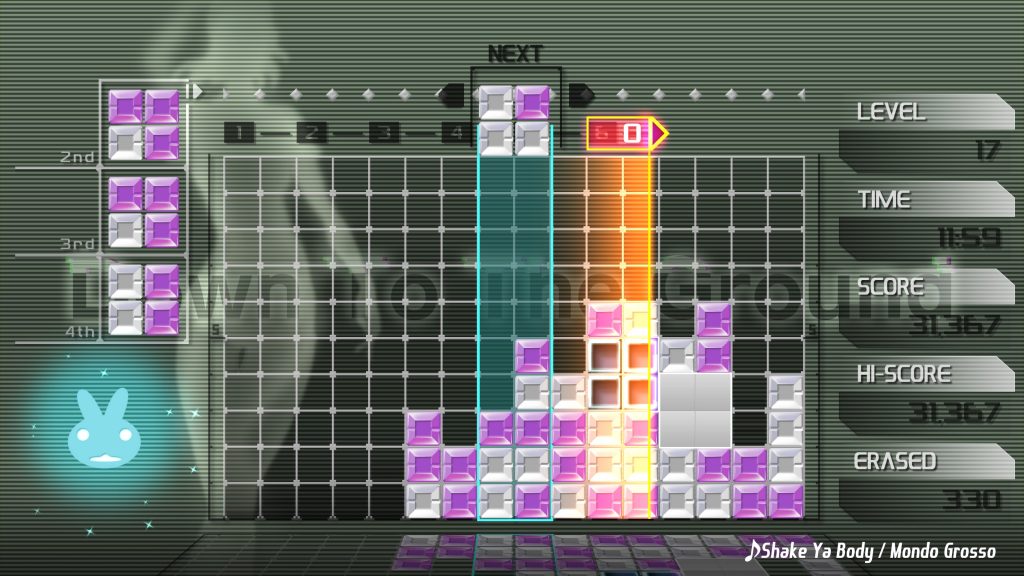 Visually the game could have been a standard monochromatic affair and the gameplay would work but they’ve gone all out here to give us a gloriously colourful aesthetic.  Each ‘level’ of the game adds a new look called a skin and there are plenty of these skins to unlock, each shifting up the visual appearance of the game.  It doesn’t appear to be full 4K but it absolutely pops on a big television and is silky smooth (at least on a PS4 Pro).

The main concern with Lumines generally is that it takes a while to get difficult.  A long while.  You can be happily playing away for over ten minutes on your first or second go without much fear of failing.  It does eventually speed up a bit, making things a bit more enjoyable, but we’d rather keep the games shorter but up the challenge a bit. 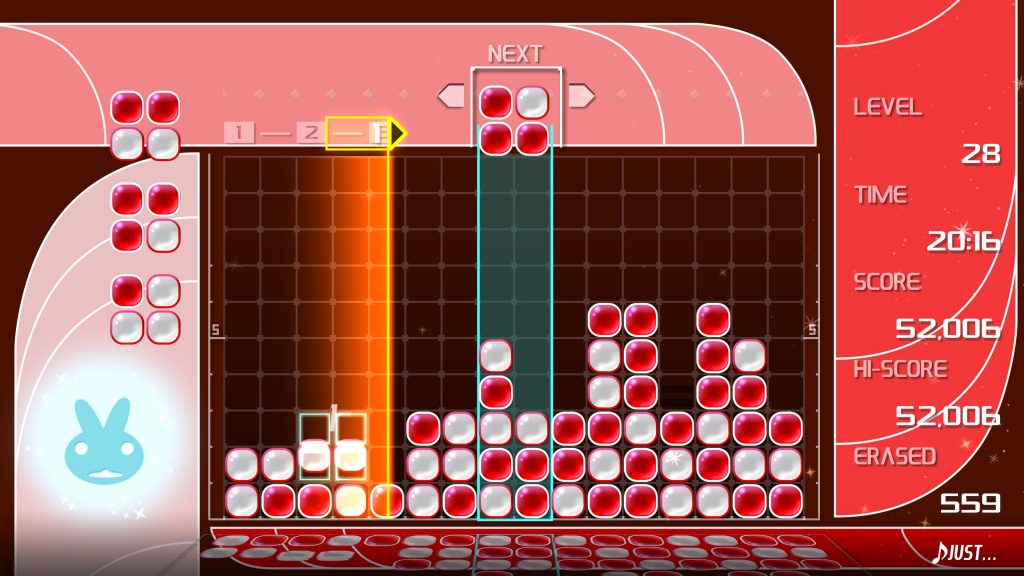 You do have time attack options that focus the gameplay a bit better as well as some mission and puzzle modes which really add to the gameplay by trimming out the slower aspects of the game.  The puzzle modes require you to create specific shapes on the playing field.  These can be pretty fiendish but do help you to become  a better player.  While the mission modes are focused on specific in-game objectives such as clearing a column or clearing the board in a set number of moves.  These are great for pick up and play gaming if you don’t want a one hour run through all the skins in the game.

The package is completed with a VS CPU mode.  This sees you sharing one playing field with the AI.  The better player will push expand their part of the area and constrict their opponents, making life hard for them.  The first player to fail loses the match.   This mode is pretty intense and broken down so that you get a break between victories, and defeats. 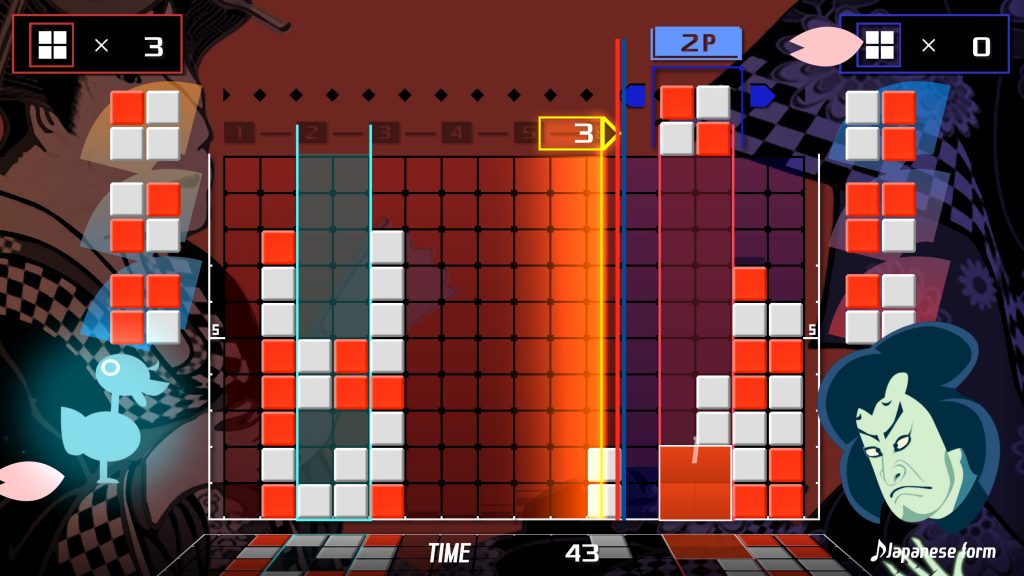 We’ve lost the avatar abilities from Electronic Symphony which is a shame as they were often pretty useful and there are no editor modes for creating your own visuals and music.   You can create a playlist of skins but that’s not very exciting.  Overall though, we’ve got very few complaints.  The game looks and sounds better than ever and the gameplay is still what you want if you’re a fan of the series.  As far as sequels or reboots go, it’s not up there with Rez Infinite which took an already great game and added VR support and a whole new level.  By comparison Lumines Remastered feels a little lacking but in its own right this won’t disappoint fans of Lumines or puzzle games in general.

We’re still not sure how you pronounce it though.

Lumines Remastered
8 Overall
Pros
+ The Lumines gameplay is still as accessible as ever
+ Addictive
+ Great presentation
+ Puzzle and Mission modes add variation
Cons
- Takes a while to get challenging
- Core gameplay may be too simplistic for some
- No online play
Summary
Lumines Remastered doesn't take many chances with the classic Lumines formula but elevates it with some lovely presentation. If you've still got unfinished business with the Vita version, this doesn't do much to make it an essential purchase but if you're a fan of the genre, and the series in particular, this won't disappoint.