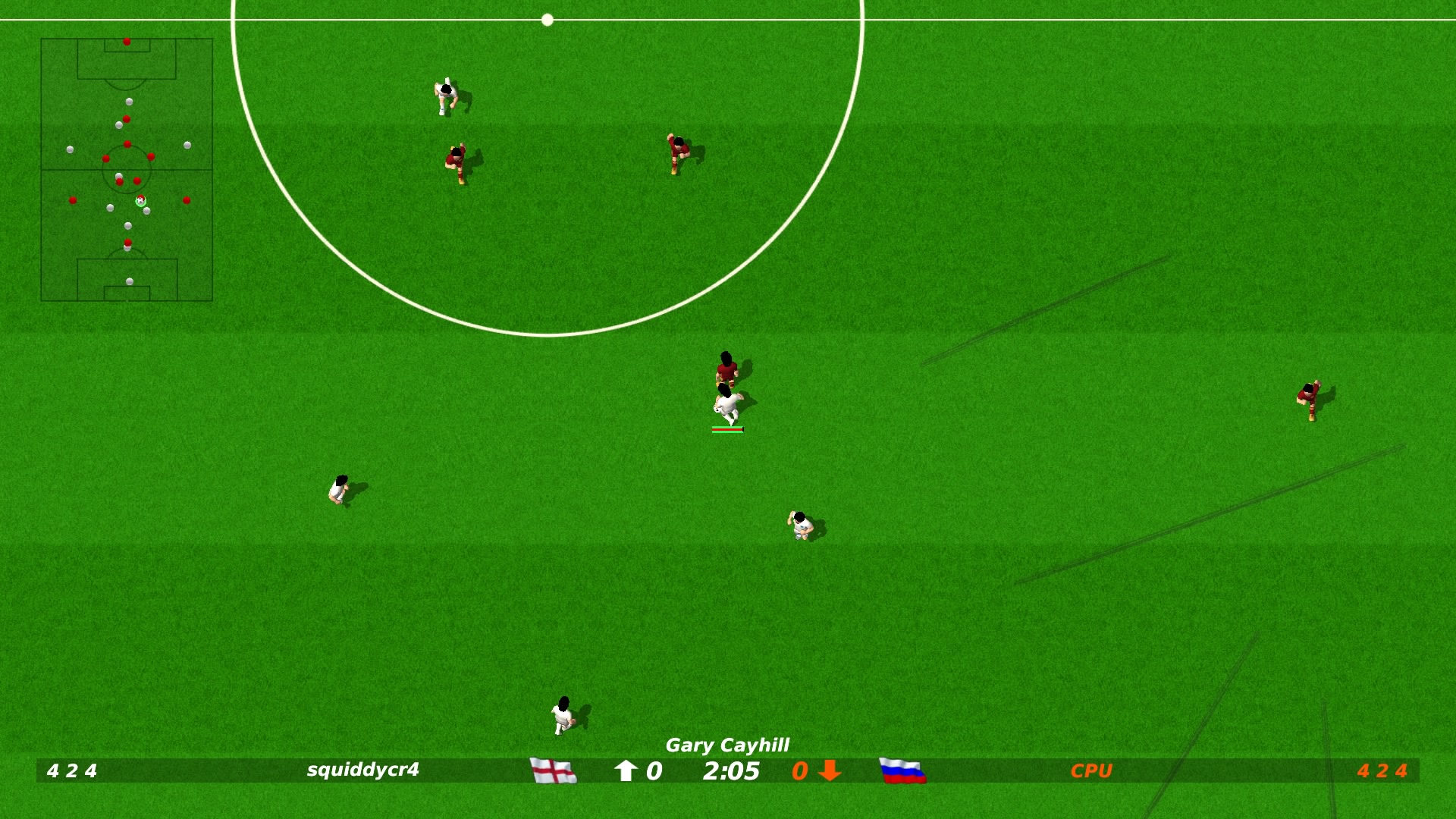 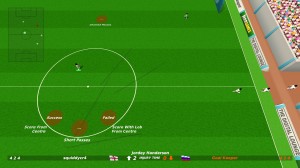 Okay, cards on the table.  Sensible Soccer.  You were either one or the other and I preferred Sensi over Kick Off.  But despite that, I’ve been eagerly awaiting Kick Off Revival and Dino Dini’s remake has finally arrived.  The reason I was so keen to play it is that the football game genre has been treading water for years now in simulation hell and I still love a good, basic top down footie game (not just Sensi but also Total Soccer on GBA and PS1 Net Yaroze).

Kick Off Revival is as basic as it comes.  The initial options are just ‘Play’ and ‘Practise.’  The latter puts you on a pitch with no opposing team and has you practising basic moves such as crosses, passing and lobs.  There’s no tutorial though but with the unashamedly retro one-button control method, you won’t think you need one.  More on that later.

The ‘Play’ option leads to one and two player matches, an online mode and a basic Euro Cup (which mirrors the fixture list of the current tournament).  That’s it for options.

When I say that, I mean it.  There are no options in this game.  No sound and music options, no controller options, no difficulty settings.  You can’t change the length of your matches.  You can’t edit your teams.  You can’t even change your formation.  You wan’t to play a 4-4-2?  You’d better get used to picking Ukraine then because England play 4-2-4 and that’s that, son.

Graphically the game is powerfully poor.  The viewpoint is alright (top down) but completely unadjustable in terms of camera height and tilt.  The crowds look like extras from Crossy Road or something else suitably undetailed.  The stadium (there’s only one) is pretty bad looking.  The initial sweep in before a match shows it to be topped with blocky flags for some reason.  The whole thing looks a bit pre-alpha if you ask me. 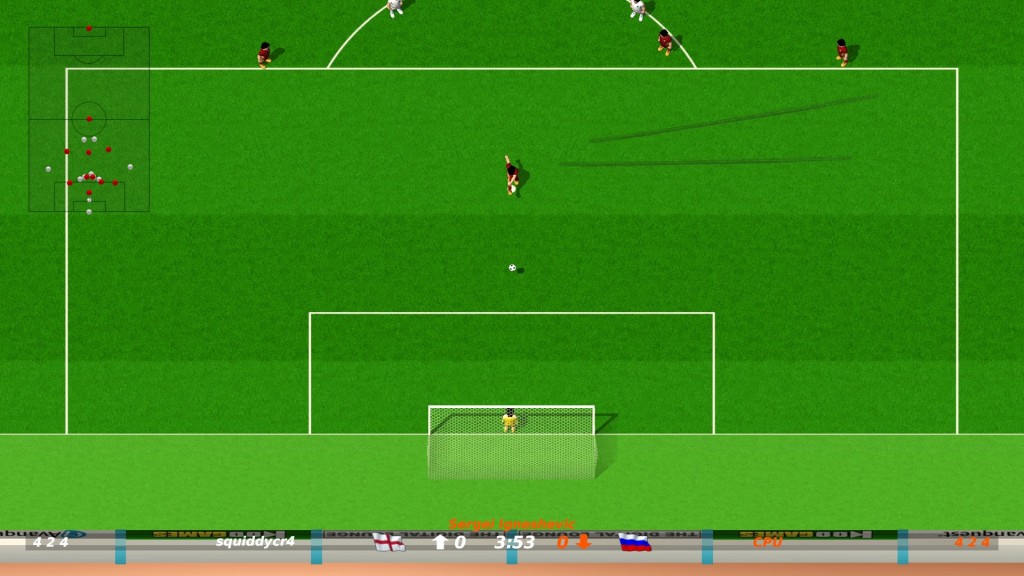 The sound isn’t much better.  Short bits of music play prior to the action.  This part is always the same length but the music has to fade out because it doesn’t fit.  After that you just get basic sound effects.  The kick of a ball, a basic bit of crowd noise, no commentary.  It’s all very simple and shows a real lack of effort.  Now look, I don’t need, or even want, FIFA style excess.  I skip through every cutscene FIFA and Pro Evo have to offer but that doesn’t mean I want presentation akin to a game development student’s first project.

Of course all the lack of modes, options and production values could be swept away by amazing gameplay but unfortunately, the gameplay is pretty weak.  It’s as unreliable as it is unsatisfying and while Dino Dini has never been one to take criticism in a particularly favourable way, I suspect most of the reviews out there will cover these issues.  But here’s my take.

One button worked great for Sensi but here it really hinders you.  The game offers no advice at all, which would be fine except that Dino has since tweeted out two flowcharts explaining how the controls.  That’s because there really is some complexity to the initially simple-looking system.  Holding the button initiates a close control mode.  Tapping it kicks the ball unhelpfully about a foot forward and pressing it a for a little longer makes your pass/shot more powerful.  The upshot of this is that when you want to power a shot in, you’re going to probably end up going into close control.  That’s because power is apparently controlled by how far you are pushing on the left stick.  Not that I could tell. 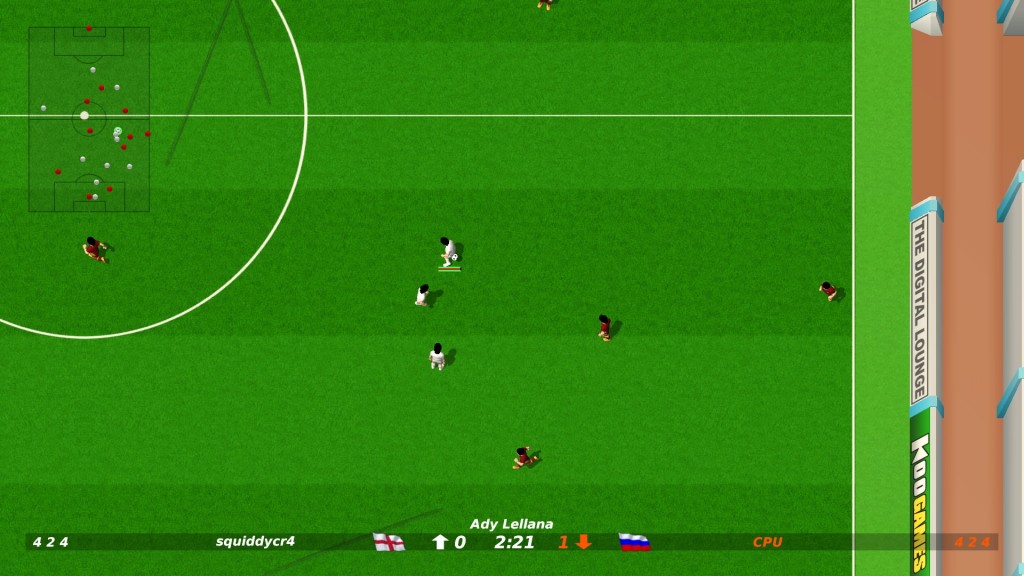 Off the ball, tapping the button initiates a comically eager slide tackle.  I can safely say that 90% of goals I’ve conceded have come from penalties.  If the ball goes into your box, your best bet is to just hope the AI cocks it up.  If they get a shot on target the absolutely terrible goalkeepers are going to do you no favours.  Oh, and you can’t even control the keepers in any way, not even during penalties.  Although if you’re lucky you’ll concede a penalty in the last minute and the ref will blow the whistle between the penalty being kicked and the ball hitting the net.  It’s happened twice while I’ve been playing.

The other set pieces are relatively atrocious too.  Taking a free kick or penalty sees you flailing around the ball before inevitably spacking it sideways like some sort of Boris Johnson.  Controlling the pace of the ball is nearly impossible.  You want to a do a short corner?  Well, the controls have zero context so if you tap the button, you’ll kick the ball about three inches forward and will stand there paralysed while your opponent pinches the ball off you.  Literally every corner I’ve seen a human opponent take has gone this way so far.  Every single one.

Oh, and my player once walked into the ball going to take the corner and knocked it out of play for a throw in before I could even get involved.  I’m not even joking.

The speed of everything makes it all seem a bit random and at first, it seems just overwhelmingly terrible.  However, with practice you do get a bit better.  I’m now winning matches against the AI but it’s never that satisfying.  There are no replays of goals, so any glory is fleeting outside of using the Dual Shock’s share button.  And anyway, the controls are so sketchy, you don’t feel that much in control.  There’s zero satisfaction in shooting because it always feels a little weak.

Online play is a little unpopulated at the moment (I tested this before the game was released on PSN) but it didn’t seem laggy and was all very smooth.  My opponent kept cocking up his set pieces and we kept accidentally scything each other down but we had a good game until the last minute or so when we got disconnected.  I was losing and I certainly didn’t quit.  Whether or not this was the netcode or something else, I can’t say.  However, in a display of almost stunning stupidity, at half time in an online match there is a mandatory thirty second wait.  You can’t do anything (remember, no subs or tactical changes allowed) so you just wait there while a message trolls the fuck out of you by saying that disconnecting isn’t very sporting.  Jesus.

If the gameplay had been footie perfection, all the other stuff could have been forgiven but this game is so basic, I’m amazed there are any bugs present.  The day one patch had already gone live, so there is clearly a lot of work left to do.

In terms of the pure gameplay, minus the quirks and bugs, it’s pretty much average.  Playing it isn’t particularly exciting because any moments of skill are lost immediately and it all feels like you’re playing on an ice rink.  However, some people might like the core gameplay and so that’s pretty much subjective.  But rating it at a solid five, you then start deducting for everything else and while it’s all very retro seeing ‘Wain Roonie’ and ‘Harris Cain’ leading the England attack, you can’t really get away with this lack of effort.  Kick Off, when it was released, was a modern game.  This is just a throwback that thinks being old-school makes up for everything else being dismal.

There’s even a trophy in there called ‘Sensei not Sensi’ which is a little dig at the ‘other side’ but if you’re going to pick a fight, make sure you can even compete.  This can’t.  This is fucked.