From Honey ∞ Parade Games, Shade Game Development and publisher Marvelous! comes the extremely Japanese Kandagawa Jet Girls. This is a licenced game of the anime of the same name in which the jetter is the pilot of the jetski and the shooter is, well, you work it out. The quick elevator pitch is Wave Race X Mario Kart: Double Dash with visual novel elements. Production values are all very high with graphical flourishes aplenty. 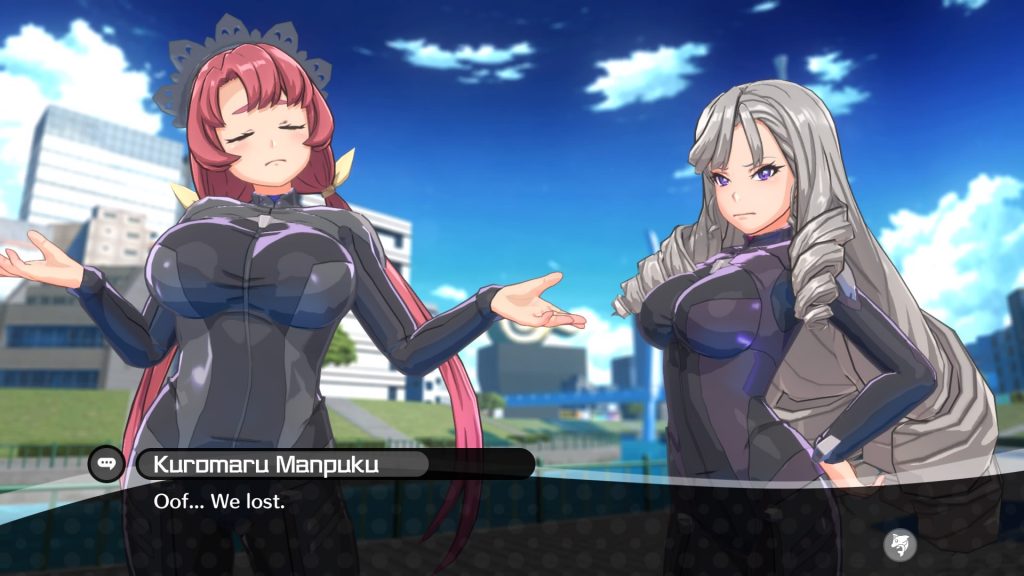 However, the game producer is Kenichiro Takaki, or as in the case of this introductory video, “Righteous Boobage Producer”. The jet girls themselves, are Japanese school girls with overblown chest attributes.  It’s as sketchy as it sounds. He’s got previous form in the Senran Kagura series and is on record as saying “that games with sexual content add variety, and that’s good for the industry.”

Perhaps that quote is lost in translation a little, but it’s a rare game that this reviewer is embarrassed to play with my wife in the room. Not because of the racing elements, those are fine. But the jiggling underage depictions of schoolgirls are a bit much. It’s faithful to the anime at least, but given this game was developed alongside it, we’d be surprised if it weren’t. 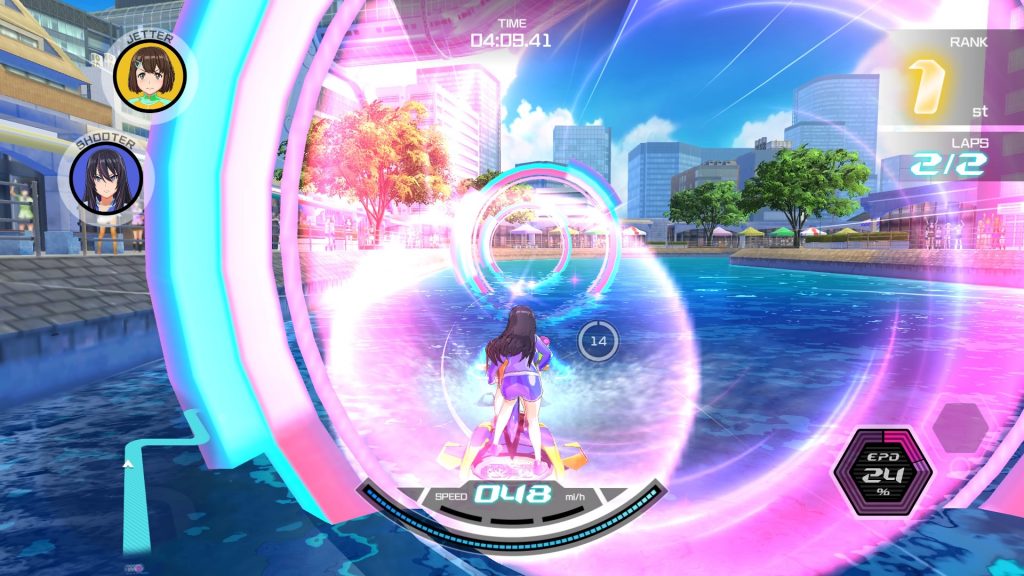 The main story focuses on the lead characters from the anime who attend Asakusa Girls’ Municipal High School and cultivate dreams of being a racer just like their respective parents. The ultimate goal being to win the titular Kandagawa Championship. As you progress you’ll unlock the ability to play the storylines of the six rival schools you’ll race against. It’s all fairly typical talking heads for people used to the standard visual novel delivery of a cute girl delivering disposable dialogue. But the absurdity of the animation concentrating entirely on breast bounce is a bit much.

Thankfully you can skip past these visual novel sections, but the fact remains how overt they are. This is compounded by the fact that fulfilling objectives within races unlocks new swimsuits. Sure, there’s occasionally useful upgrades unlocked but these feel very secondary to the fact you’re unlocking swimsuits for young girls. 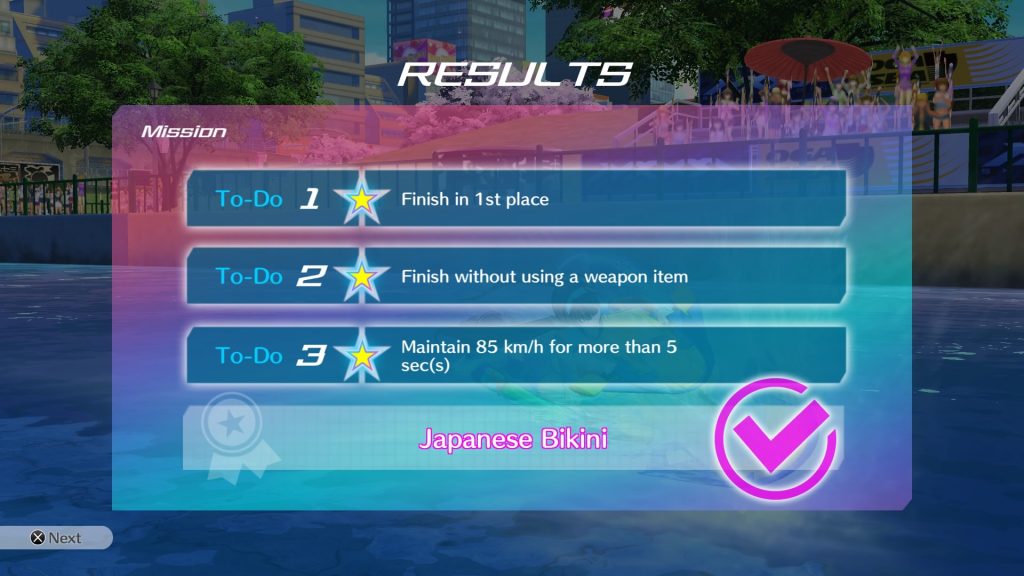 The racing is top-notch, though it’s a rare racing game where a tutorial is a mandatory step to progressing with the campaign. We recall a Gran Turismo game in the distant past insisting on similar error-free stipulations. It’s no bad thing as it gives you a fair grounding in the handling and tricks available.  There’s also eight distinct weapon types on offer which makes your interaction with the other racers a little more than just cute soundbites.  They’re all variations on a super soaker but fun all the same.

There are several noticeable landmarks scattered among the tracks on offer, taking in several Tokyo locales like Akhibara, Ochanomizu & Ichigaya to name a few. The Asahi Flame in Sumida is visible for example. Kandagawa Jet Girls has parallels to this well-meaning object. It’s objectively beautiful, but ultimately a bit of an embarrassment. The flame is more colloquially known as The Golden Turd due to its shape. Just as Kandagawa Jet Girls is more likely to gain attention on the basis of its depiction of young ladies rather than the actually quite good racing on offer. 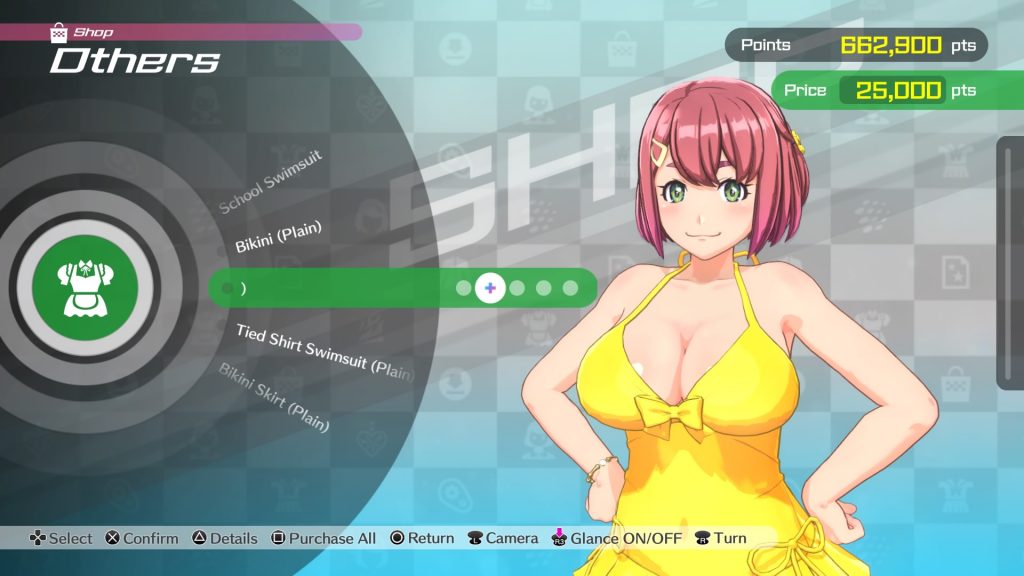 This depiction is cemented further by the dressing room mode. Here you can select all manner of unlocked costumes and dress up your choice of the young ladies. You can even toggle whether they’re looking you in the eye or not. Fine if you’re a weeb who wants to get overly familiar with your new waifu, but just a bit much for anyone else. One daft thing we noticed is if you choose a mad anime style haircut, the more outlandish hairstyles clip sometimes clip right through the bodies of the characters. For a game that seeks to focus on their attributes so much, it’s an odd oversight.

In an adjacent menu you can equip useful machine parts that affect your jetski’s performance as well as cosmetic upgrades ranging from colours to decals and the effect your wake leaves behind. Rather than one of the girls you get a depiction of one of the jetskis you race with. It’s a welcome respite, put it that way. 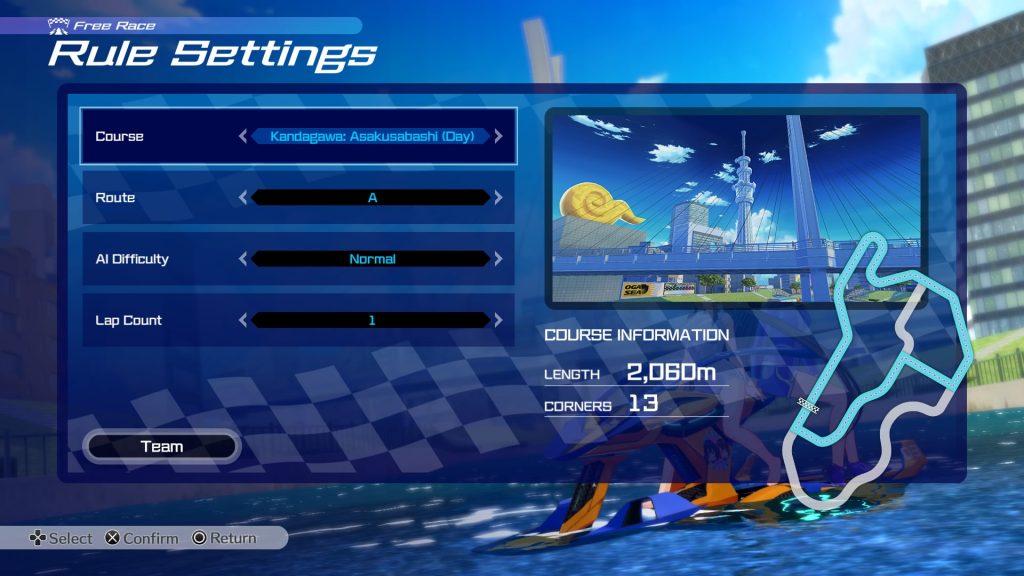 Besides Story Mode for each of the seven schools, you can take part in free races and time attacks. The free races are just that, an opportunity to race on those events outside of career mode. Similarly, time trials are a chance to try your racing setup against the clock in a single lap of an already unlocked event. As far as we can tell, the very best times in the world are set by those with all the upgades. No matter. In either mode, completing a race gives you credits to spend towards upgrades. The trophies you unlock from beating the easy default ghost times are a nice incentive though. We’re not entirely sure we’re supposed to be unlocking them quite so easily, but we’ll take it.

For the trophy completists, a platinum trophy is going to mean playing a lot of Kandagawa Jet Girls and unlocking literally all it has to offer by completing every single story event on offer across the seven schools. Thankfully the racing is great fun even if you’ll rarely not win races on default difficulty. It’s more of a grind than anything as the only real skill based trophies you’ll need to worry about are from getting an SSS rating in eight story missions. Given there’s a trophy for clearing 128 story missions, you’ll no doubt get those SSS rankings through normal gameplay. It’s a rare racing game that you can rinse in this fashion anyway. 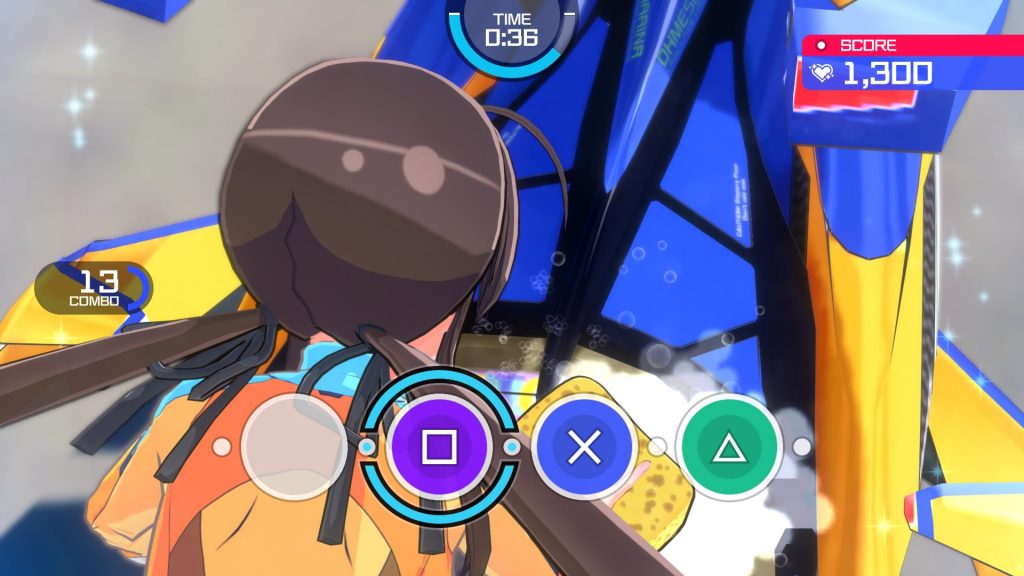 We almost forgot to mention the Extracurricular activities menu. You can play four distinct minigames: a soapy jetski wash using rhythm action controls, a treadmill run, deck mopping and a stunt ramp mode where you can practice aerial techniques in race.

The first minigame is actually not as bad as it sounds, though it’s up to the player as to whether they’d prefer a demure covered up girl washing or a scantily clad option. The treadmill run is just that, it’s a side view from a fair distance off and you hammer

to run and catch hearts. It’s fun enough. Deck mopping is a weird one in that all you do is clean up spillages as you run down a boardwalk with one of those wide headed mops. These are a fun diversion if nothing else and the fact you can unlock in-game currency is an added bonus. The stunt ramp mode is a handy way to practice the ramp techniques that’ll come in useful during races too. 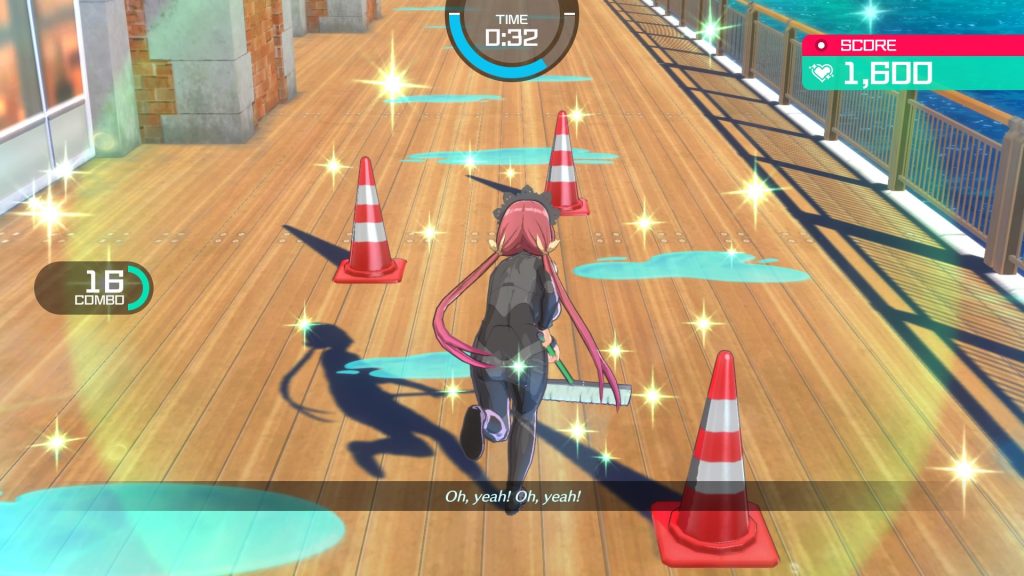 We’ve realised the last few paragraphs have barely mentioned the more salubrious elements. Hopefully that illustrates that there’s a bit more to Kandagawa Jet Girls than outright ogling, but you’ll have to go out of your way to actively avoid it. You don’t have to unlock all the alternate costumes unless you want to, though there’s a trophy for unlocking and equipping the first of each cosmetic item so you’ll find yourself in the dressing up mode at least a few times. We sorta wish there was a mode where you could switch to a male beefcake alternate and have dumbassed beach bums running around instead, but then this wouldn’t be Jet Girls would it.

In conclusion, Kandagawa Jet Girls is a great jetski racing game based in a fictional version of Tokyo. The less said about the gratuitously jiggly bits the better. Though if that’s your thing, you’re well catered for.

Kandagawa Jet Girls
7 Overall
Pros
+ Racing is good fun
+ Lots of nice graphical flourishes during races and good water effects
+ Minigames are fun
+ Plot is skippable so you can get straight to racing
Cons
- Jiggly breasted young women feel just that bit too sketchy
- Unlocking costumes serves no purpose beyond dressing up
- Objective-based unlocks are largely new swimsuits
- Dressing room mode is just… ick
Summary
Kandagawa Jet Girls is a good jetski racing game. We’re not really the target audience for the overtly sexualised schoolgirls though, but if you are you’re well catered for. Add 10% if it rings your bell. Anyone else, hit start and get straight to racing.