If you’re not familiar with the Jackbox Party Pack series from Chicago-based devs Jackbox Games, they are packs of mini-games that are started up and hosted on your PS4 but then players join in via their mobile phones or tablets.  Typically the packs are comprised of five or so mini-games, usually a mix of drawing games, writing games and quizzes.

We’ve had quite a few nerdy meet ups over the years and the Jackbox games are always the highlight of any gaming get together and while these sessions usually head towards trying to be as funny and offensive as possible, the joy of Jackbox is to play the games with a sense of whimsy.  Either way, you’ll have a lot of fun in a room full of people with this series.  However, you can also stream over Twitch directly from the PS4 and people can join in remotely, albeit with a bit of Twitch lag. 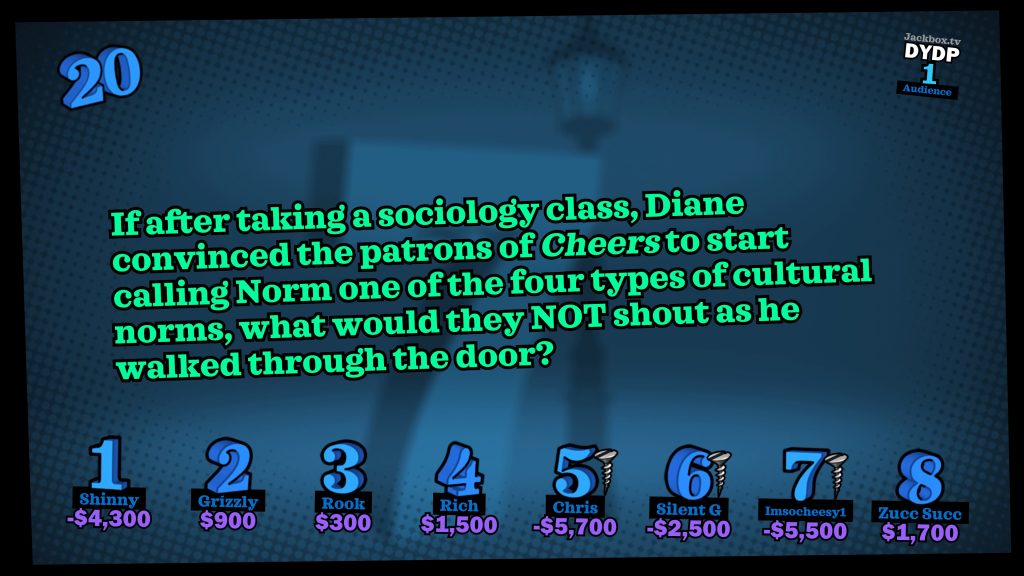 So yesterday I assembled the writing team together, and a few extra friends, and we had a major session on the game. A few randoms from the internet also caught the stream and ended up diving in for a few games too.

This pack is presented much the same as the other titles in the series with the usual funny US game show style commentary and bright and bold graphics. There are five games on offer;

You Don’t Know Jack – the original mode, the Jack in Jackbox, is back and offers several rounds of unusual quiz action. This mode benefits from the best presentation in the game with plenty of voice recordings and bits of music to complement the on-screen action. It might not end up being a party favourite but if you’re after a silly quiz game, this is well worth its inclusion in the pack.

Split the Room – your mileage may vary but for us, Jackbox has always been about trying to be funny or offensive or both. Split the Room offers players a reason to rein back those instincts and instead play a more cerebral game.

This mode gives each player a scenario with a choice and one answer. You then give an alternative answer and the other players have to choose between them but you get more points if you split the room. So a super funny answer might get a landslide of votes but that’s not what you want. You want it to be 50/50.

Split the Room works well but by tempering the players the way it does, it also tempers the laughs a little. It’s good, and we enjoyed the weird cast host and odd Twilight Zone style presentation, but when it was over we were ready to move onto the next mode. 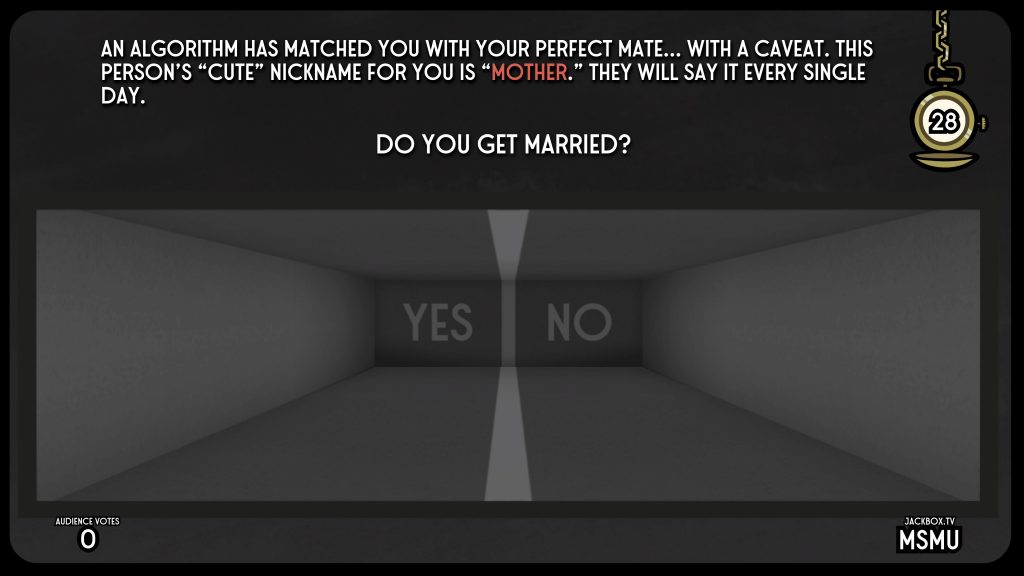 Mad Verse City – this mode may well be the best Jackbox mode ever. It’s definitely up there with Drawful and Quiplash and it maybe has the most interesting premise of any of the mini-games on offer.

In this game, each player writes rap lyrics that are then delivered by large battling robots. The game will first ask you for a word which will complete a line, then you write a second line that rhymes with the first. The third and fourth lines then follow the same pattern.  Then your robot and that of the another player will spit those rhymes, MC Hawking style, at each other.

It works brilliantly and creates a ton of scope for players to be funny and also target their humour at each other. The only downside however was that the music would sometimes fail to load and would then finish the game which was annoying when you’ve got a particularly dope lyric written and ready to unleash. 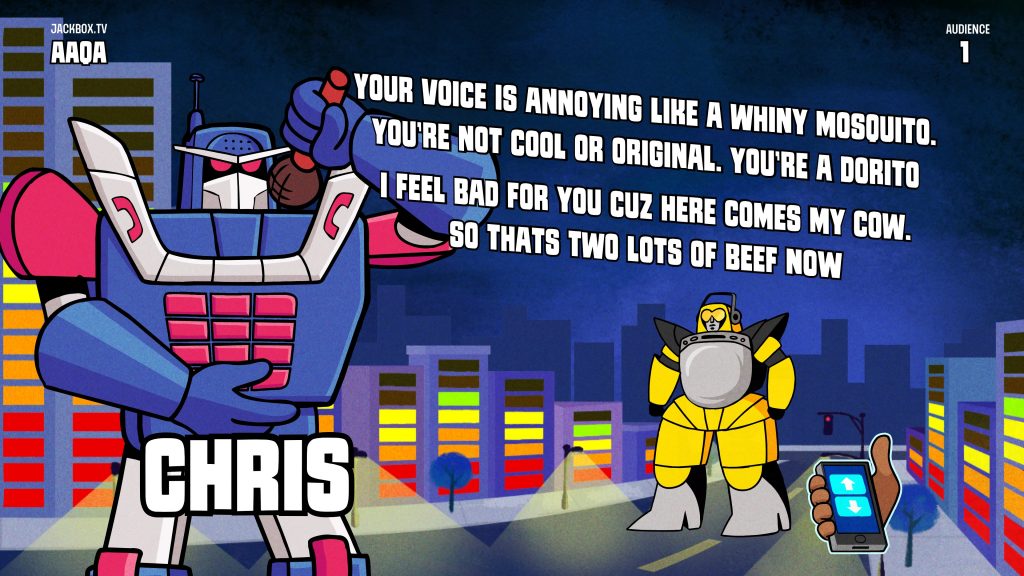 Patently Stupid – this mode is as close as you’ll get to the classic charms of Drawful but, much like Jackbox Party Pack 3‘s T-Shirt mode, this has some extra depth.  Each player is asked to complete a problem statement and then have to create a drawing, a title and a tagline for a solution.

Initially it’s a little hard to understand what it is after but you’ll soon be making some interesting creations which you then present to the group. Players then vote to back each invention with cash, in a sort of Dragon’s Den (or Shark Tank if you’re American) kind of format.

While this mode was a lot of fun, the extra constraints it gives you can make it a little less effortlessly funny than Drawful but when you get to grips with it, there’s a lot of fun to be had here. 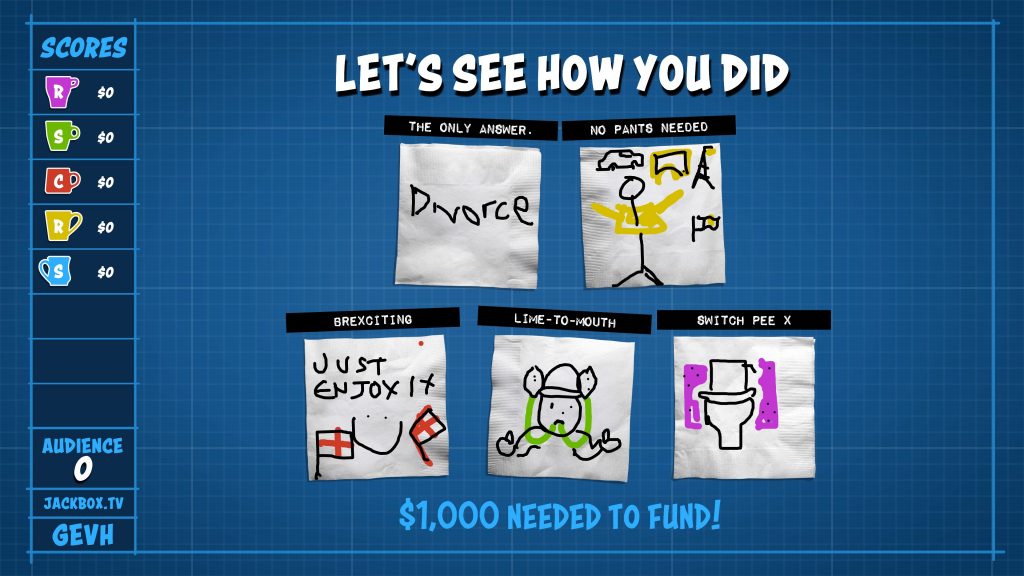 Zeeple Dome – this game is a complete departure for the Jackbox series and is very much a mobile-style arcade game which sees all players completing in an arena. The aim here is to hit targets by shooting yourself at them, Angry Birds-style.

You control you direction and speed by dragging your finger across your screen and releasing, kind of like a catapult, and while it works, it’s only suitable for local play as the Twitch lag makes it impossible if playing over a stream.

As with all Jackbox packs, this one is a mixed bag and while we can’t see ourselves returning to Zeeple Dome or Split the Room all that much, there’s some fun to be had from You Don’t Know Jack. The standout titles though are Patently Stupid and Rap Verse City, which is arguably the best mini-game they’ve made in years.

Jackbox Party Pack 5
8 Overall
Pros
+ Rap Verse City is AMAZING
+ A good mix of game types
+ The basic Jackbox concept is still great
Cons
- Has no singleplayer value
- Some game modes aren't all that good
- Not technically 100% there yet
Summary
Jackbox Party Pack 5 is likely going to be one of our staple party games from now on and is a great addition to the series.