While the concept of having a redneck running around Ancient Egypt causing mayhem is a fairly original concept, Immortal Redneck feels very familiar.  The game is an FPS with rogue-lite elements and it borrows heavily from previous PSN titles such as Ziggurat, Tower of Guns and Rogue Legacy and it comes to us from Spanish coders CremaGames.

After a little bit of plot, the game introduces its basic gameplay loop pretty quickly.  You play as the titular redneck and you wake up, mummified but mobile, in a sarcophagus that you bust open, revealing three pyramids.  Upon entering the pyramid ahead of you, you’ll be presented with room after room full of enemies, traps and platforms to get past in order to find that floor’s exit.  You are armed with three guns and, initially, that’s about it. 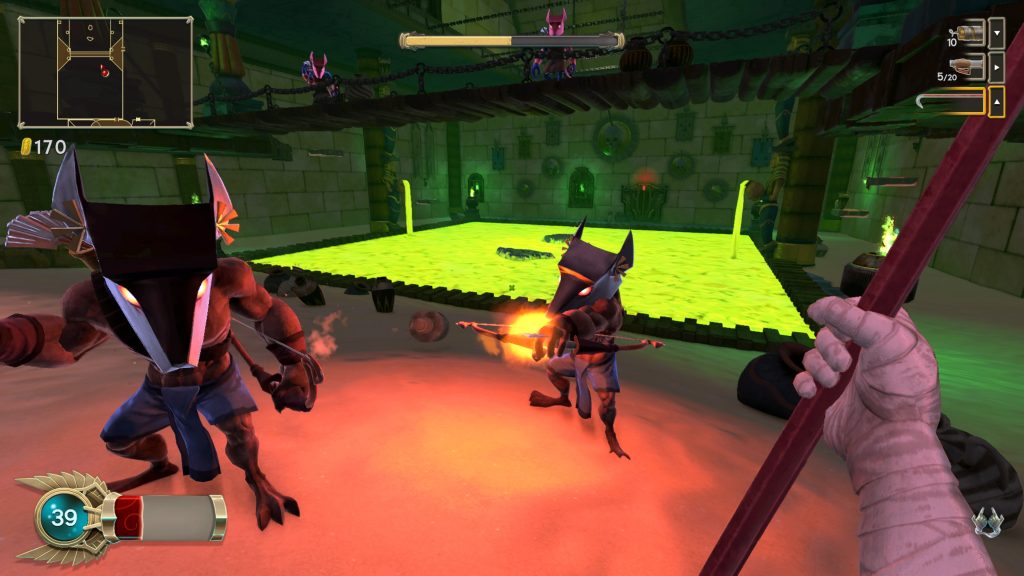 Enemies either charge at you or shoot at you from afar.  Running, jumping and strafing is the key and Immortal Redneck initially feels a lot like a Quake game thanks to its small arenas and need for constant motion.  There’s no stealth action to be had here, this is as old-school as it gets.  Add to that the lack of fall damage and the fact that head and body shots are equally weighted and there’s something almost refreshing about playing something so immediate.

As a rogue-lite, you can expect death to come pretty quickly and it won’t be long before you find yourself emerging from that sarcophagus once again.  This time though you’ll have a bit of gold to spend as this is dropped by enemies.  Gold can be spent on minor upgrades to health, speed, attack power and so on as well as unlocking gods who act as new classes.  As expected, these don’t all perform equally but you’re sure to find your favourite in there.  That said, any time you buy an upgrade, the cost for upgrades goes up across the board and, much like Rogue Legacy, you have to hand all your spare gold over when you next enter the pyramid. 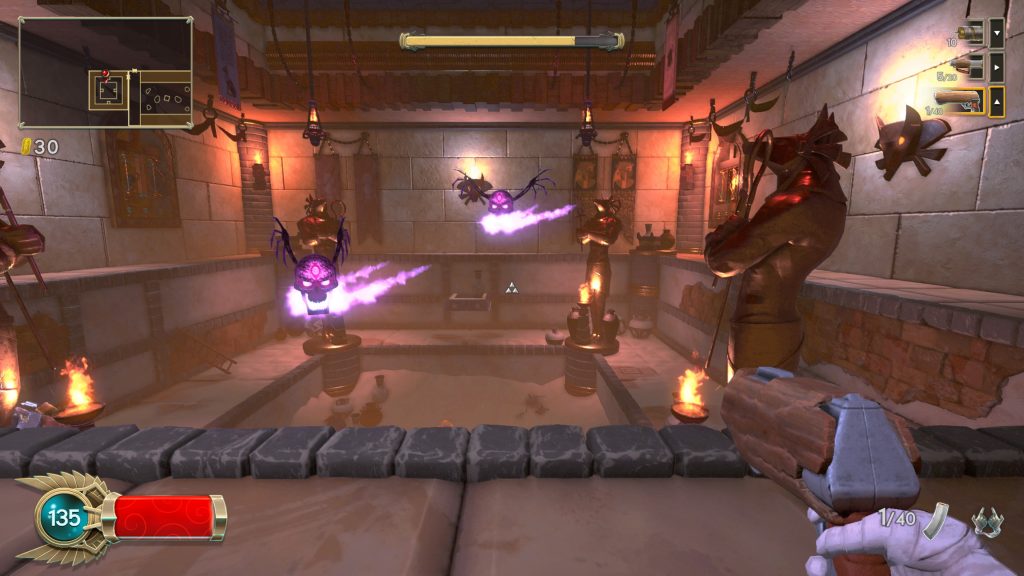 Eventually, some hours later, you’ll be capable of meeting the challenge of the pyramid.  Sure, the floors do get progressively harder (and the final boss can be a bit unfair) but you will, at some point, start seeing some success and success leads to more gold, which leads to more upgrades.  This is definitely has a benefit and an issue.   On the plus side, the constant upgrades do lead to a degree of addictiveness.  The longer you spend in the pyramid, the more opportunities you have to do well.  You can go for the exits as quickly as possible, but building up your gold and finding scrolls (that offer new perks for that run only) and weapons is definitely the best tactic if you want to be prepared for the harder stages.

The problem though is that success also feels bought, as if all you’ve really done is grind your way to enough health and attack power.  Your best runs will be a combination of all that grinding and also favourable pickups for weapons and scrolls.  There’s a lot of luck and perseverance there but not necessarily a lot of skill.  You do become a better player by learning how the enemies behave but given that they mostly just run at you, it’d be very generous to claim that this game improves you as a player on a skill basis.

As your runs become longer, the idea of starting from the pyramid entrance yet again can begin to feel like a chore too.  When I died on the final boss thanks to his huge range of area of effect attacks, starting from the ground floor took a degree of patience and mental fortitude that games shouldn’t require.  I know that’s the nature of rogue-lites/likes but even so, Immortal Redneck is probably asking for things I don’t want to give. 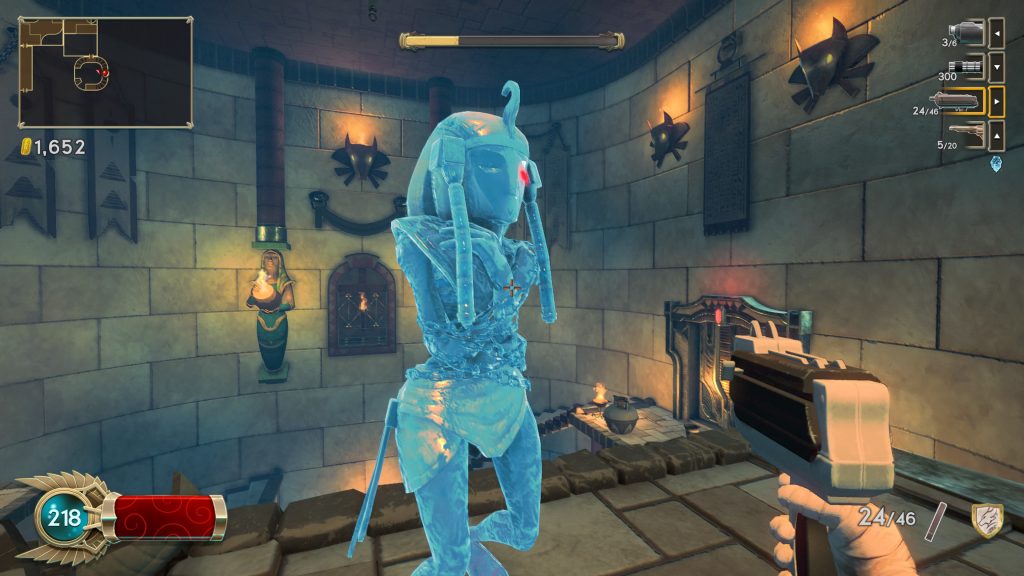 With all that said, Immortal Redneck at its best is enjoyable.  Sure, it’s a little bit dated in its approach and even its rogue-like mechanics feel all too familiar, but it’s easy to forget all that when you are blasting your way through the pyramid.  Managing your weapons adds a little bit of thoughtfulness to the otherwise very simple FPS action and the platforming feels great thanks to you being able to grab ledges.  It really feels easy to get around the arenas that you are faced with and they’ve done a great job of making you feel agile and able to cope with the large amount of enemies and firepower that will be coming your way.

The game is fun and that counts for a lot and ultimately it feels like more than the sum of its parts given that those parts are a old-feeling FPS engine and grind-based upgrading that we’ve already seen in a few recent games.  If Immortal Redneck went balls out in a Serious Sam style with massive enemies in large numbers, that’d elevate it but you never get that sense of spectacle either.  In the end, the game does enough to be very entertaining but it stops short of being truly special.

Immortal Redneck
6 Overall
Pros
+ Immediate and fun FPS gameplay
+ Good rogue-like elements
+ Can be addictive
Cons
- Procedural levels feel uninspired
- Doesn't do anything you haven't seen before on PSN
- Quite grindy
- Average presentation
Summary
Immortal Redneck offers plenty of shooting and upgrading based fun that will appeal to fans of rogue-like titles. However, progress feels like it comes from putting in the time rather than improving your actual skills.