I, AI is a vertically-scrolling shoot ’em up from Satur Games who previously brought us the sophisticated twin-sticker Stellatum.  Much like its predecessor, this is a game with a focus on upgrading but is a much simpler affair to understand.

After a brief bit of plot that explains that you are a rogue AI that takes over a ship in a bid to escape from humans who were using you to create weapons of mass destruction).  A simple first level has you flying through circuit boards as you escape but after that there are 19 levels of fairly straightforward shoot ’em up action for you to take on.

Each level is exactly what you’d expect from this genre.  You fly upwards as enemies drop in from the top with the aim of either crashing into you or blasting you.  You can take a couple of shots but anything more than that (or any shots from larger enemies) will destroy you and that’ll be your game ended. 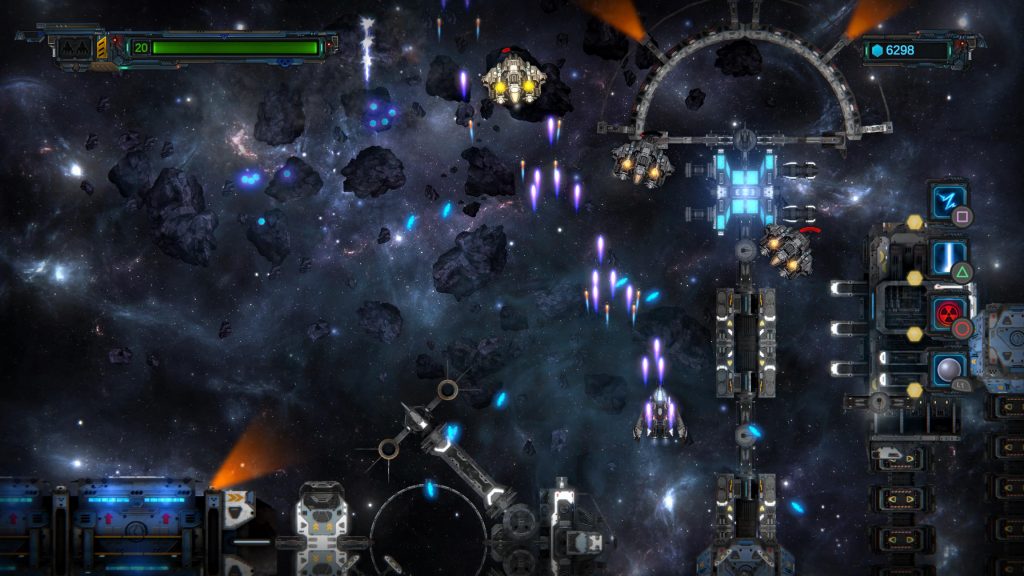 As you shoot enemies, they’ll drop blue coins that can be collected and spent between levels on upgrades and this is necessary as the levels do get progressively harder.  Your basic ship has no hope of staying alive after a few levels and so you’ll want to bolster its offensive powers.

You can upgrade your ship’s main blaster and two other forward firing weapons that are all triggered by holding R2 (excellently, you can also choose an autofire option) as well as secondary weapons which include a fairly rubbish electricity weapon, a handy smart bomb and a decent laser beam weapon.  Armour can also be upgraded, giving you a bit more durability and you can even buy and upgrade a shield however, sometimes armour and shields can sometimes seem a bit useless in the face of some larger attacks no matter what you do but it is generally helpful. 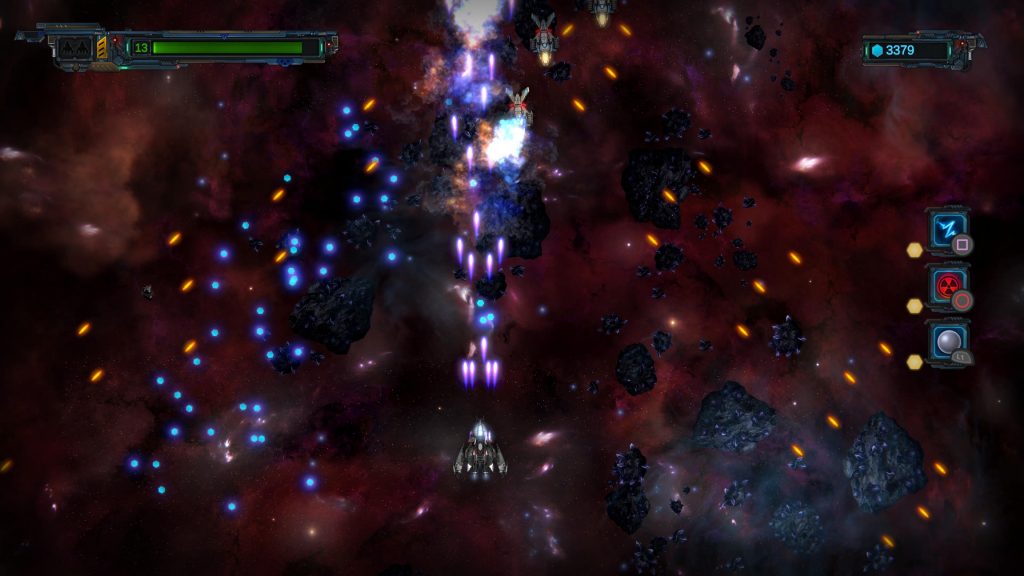 The problem with this system is one that is common to a lot of shoot ’em ups that use these almost rogue-lite mechanics.  Beating a stage becomes more about upgrading your way through them, almost brute forcing it, than actually using skills and learning the levels.  That’s kind of the case here, at least on Normal difficulty, but dropping it down to Easy does help the progress flow better and actually makes for a more enjoyable game.  No matter the difficulty though, you’ll need to upgrade and that means going out of your way to get the coins.  If you fail a level, you only get half the coins and if you destroy every enemy you’ll get a 50% bonus.  This doesn’t make a huge amount of sense though as you see your coin total during play and at the end you don’t seem to get rewarded or penalised.

As with Stellatum, the game is a little staid at first.  You start out armed with just your standard issue space peashooter but once you’ve upgraded that a few times, you’ll start to feel a lot more powerful.  Upgrades are exponentially more expensive though and do take a while to earn.  There’s an annoying trophy in there to earn all the upgrades which is something that will require at least six hours of grinding long after you’ve seen off the game’s twenty levels, which is never a sensible choice for trophies and achievements as it colours your impression of the game by replaying fond memories with those of grinding (if you’re the kind of person who likes to chase a platinum). 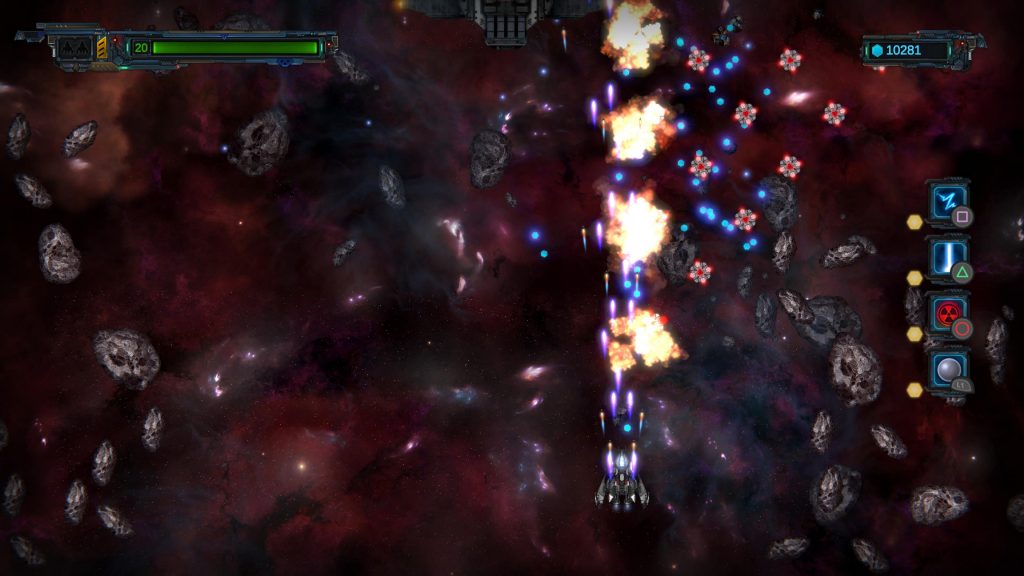 Compared to Stellatum, this is a much simpler affair.  The basic gameplay is easier to understand, there are a lot less levels and the upgrade system is far less complex.  As such it’s actually a very good place to start if you want to get into shoot ’em ups.  The controls are reasonably intuitive and the gameplay flows quite well.  Even the end of level bosses aren’t too bad when it comes to difficulty spikes, although some of them have very cheap, untelegraphed attacks (such as lasers) that can end your run instantly.  But each level is only a few minutes long and so you’ll be able to rectify any mistakes and prepare for any of these surprises pretty quickly.

When it comes to presentation, I, AI isn’t too bad at all.  The visuals share the dark aesthetic of Stellatum with detailed but understated backdrops mainly featuring rocky or metallic backdrops.  While it won’t turn many heads, it does help the bullets and collectibles to stand out nicely from the background.  The bosses are suitably imposing, if a little generic, and everything moves along nice and smoothly.  The only real letdown is that the story is told in static cutscenes which don’t add much value. 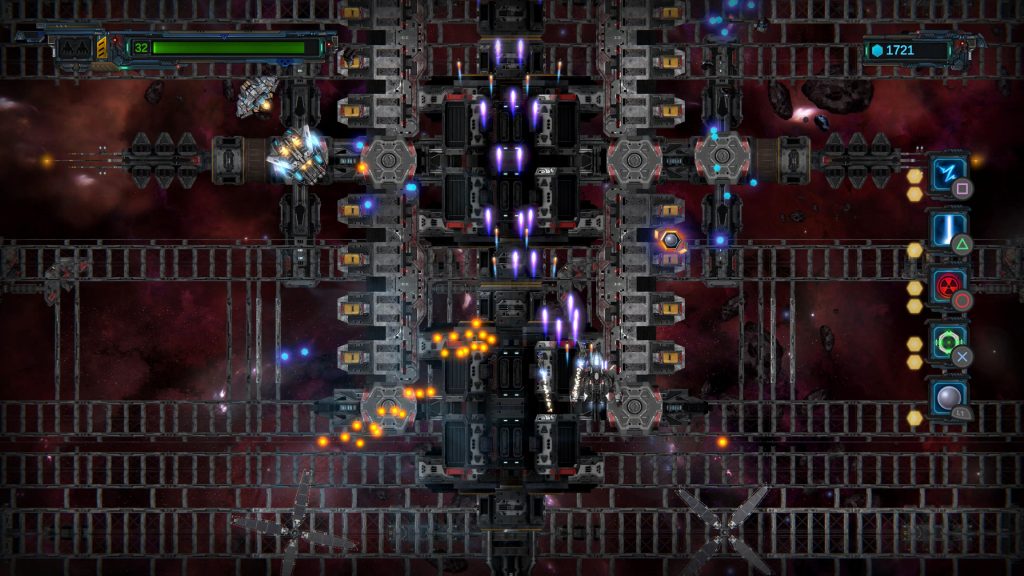 The game’s sound isn’t amazing but it does a job.  The best thing is that you can independently turn down the incessant sound effect that plays when you shoot.  That’s a very smart option.  The other sound effects are pretty mediocre and if we’re complaining, it’s odd that larger enemies often make the quietest sounds when they explode.  The other niggle here is the terrible voice effect that plays when your AI character talks.  It sounds like a poorly digitised Arnold Schwarzenegger.  With each boss encounter, he says something but to us it sounds like ‘mumble mumble Pet Detective!’ so that’s not great.

But in summary this is a reasonably quick, easy to play shoot ’em up that might favour casual players because shoot ’em up veterans will be able to complete it pretty easily.  The upgrading stuff is quite nice and the game is reasonably exciting compared to other PSN indie shooters but there isn’t much here that pushes the genre forward.  One for fans, or curious fans-to-be, of the genre only.

I, AI
7 Overall
Pros
+ Accessible gameplay
+ Mostly well presented
+ Upgrades are satisfying
+ Good range of difficulty modes
Cons
- Story is poorly presented
- Is quite repetitive
- Gameplay isn't as deep as it's predecessor
- Some boss attacks are a bit cheap
Summary
I, AI is a shoot 'em up with a touch of class to it and one that is easy to get into and play. It doesn't do anything particularly original and it does get a bit repetitive but what it does, it does well.