As the registered sports bloke, I’m given a lot of sports titles to tinker with. Handball is a new one on me. Coming from EKO Software, Handball 21 takes the top leagues of the European game and looks to bring it to a videogame audience. As a newcomer, I’m interested to see how the sport stacks up with the one in my head. Whilst it’s traditionally been a budget series, I was hoping for a game I could get into. Sadly, it hasn’t worked out that way. 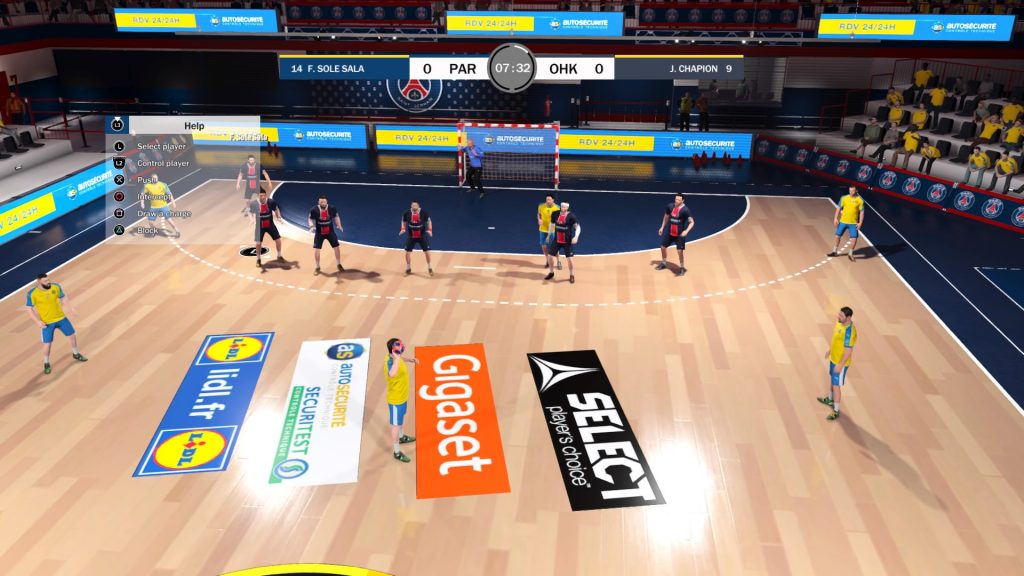 I think the Handball I imagined and the sport represented in Handball 21 are somewhat at odds. Having seen some of the sport in motion, the game does capably show the broad strokes of it. Handball is a game of attack versus defence and it leads to a tactical, high-scoring affair. It’s not too dissimilar to basketball but lacks some of the immediacy of hoops. Defences retreat and setup early. As an attacker, I find it impossible to steal a march or start a quick counter. Passing is simple and mostly lateral. You can instigate bounce passes and lobbed passes but the defensive nature of the opposition makes it hard to discover where best to use these. When I’m attacking, I find myself looking to move the defensive wall around, spot a hole and just go for shots.

I’m playing on Amateur difficulty as I learn the ropes and I find attacks are often stuffed by a rigid defence. Any breaching of the opposition’s defensive wall results in a clumsy buffeting of your player. Scoring feels satisfying but I can’t say learned many lessons from it. You have set plays you can use to trigger some movement from your players but I don’t find it too effective. Not when everything seems to be played ahead of the defense. 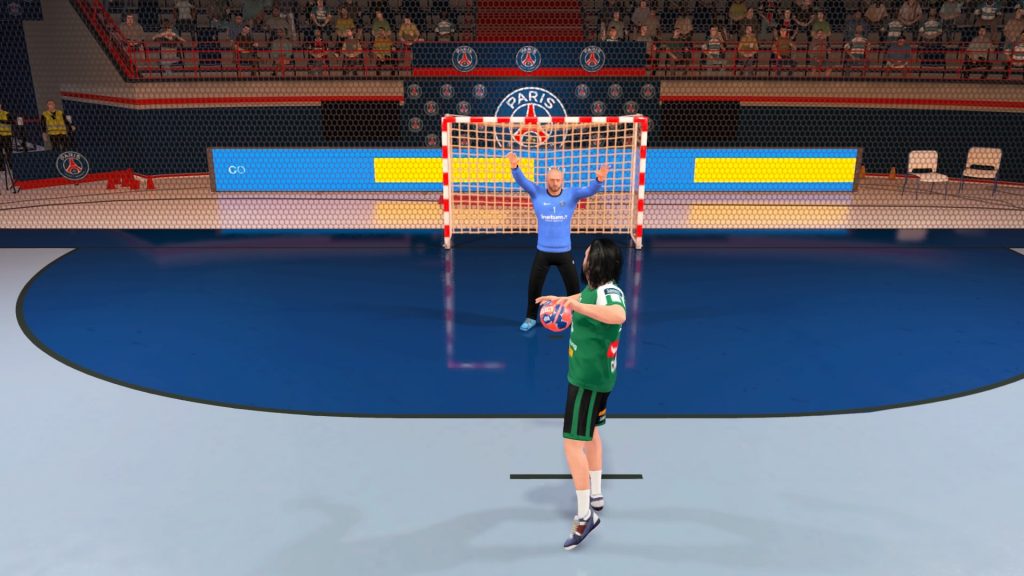 Defensively, it feels unlike any other team sport game I’ve played. It’s accurate to the sport but using your left trigger to direct a wall of resistance can feel a little otherworldly. It doesn’t help that it’s displayed on the screen as a hap-hazard prompt for the left stick. You can jump and swat shots down which can be satisfying to achieve. Interceptions feel much harder to accomplish and charging feels like a good way to concede fouls.

Despite this, I feel the defensive areas of Handball 21 work better than going on the offensive. Unfortunately, goalkeeping feels problematic. You control them with the right stick and pick a direction to save. Most of the shots I’ve faced have approached goalkeepers in slow-motion. Even with this advantage, I find picking the the right direction and having a keeper commit to it is a battle. They regularly flail their limbs about in a manner to make themselves feel big and giving you control means you’re trying to combat against that.

It’s a shame the gameplay doesn’t feel more fluid. The only aspect that feels dependable are in the passing but the crucial acts of point scoring and prevention feel a little chaotic. You have the opportunity to feint shots and more advanced techniques but the whole sport feels like a close-quarters event. Space is crucial and I just can’t find enough of it. 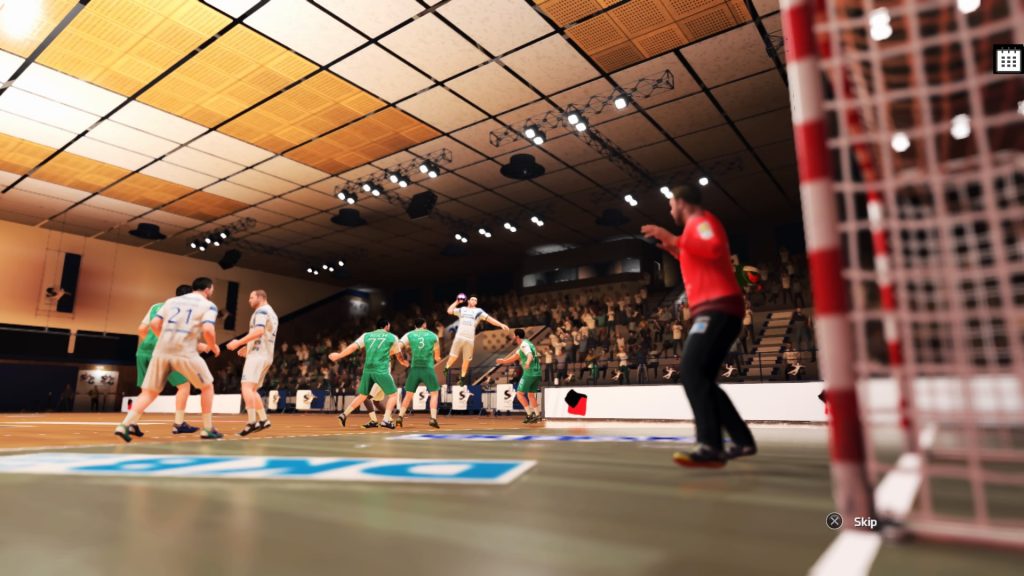 At times, I wonder whether the sport itself limits my enjoyment of the game. It’s a sport fought so much in the final third and I don’t find a lot of inertia from it. One thing that does take me out of the experience is how jarring the player animation can be. Players scampering after loose balls feels every bit of Handball 21’s budget. This lack of polish is seen all too often in the menus with them displaying a rather unnerving, persistent flicker.

The on-court presentation is dealt with fairly well. A vast majority of players come with photo portraits and their in-game likenesses match up well. The leagues EKO Software have acquired all come with accurate kits and there’s some real-world venues added to the mix. In spite of the budget constraints, they’ve used the license effectively. Crowds are always full and there is a decent atmosphere on display. You’ll see the same introductory cutscenes repeat but they have at least made a good effort to represent the top European leagues. 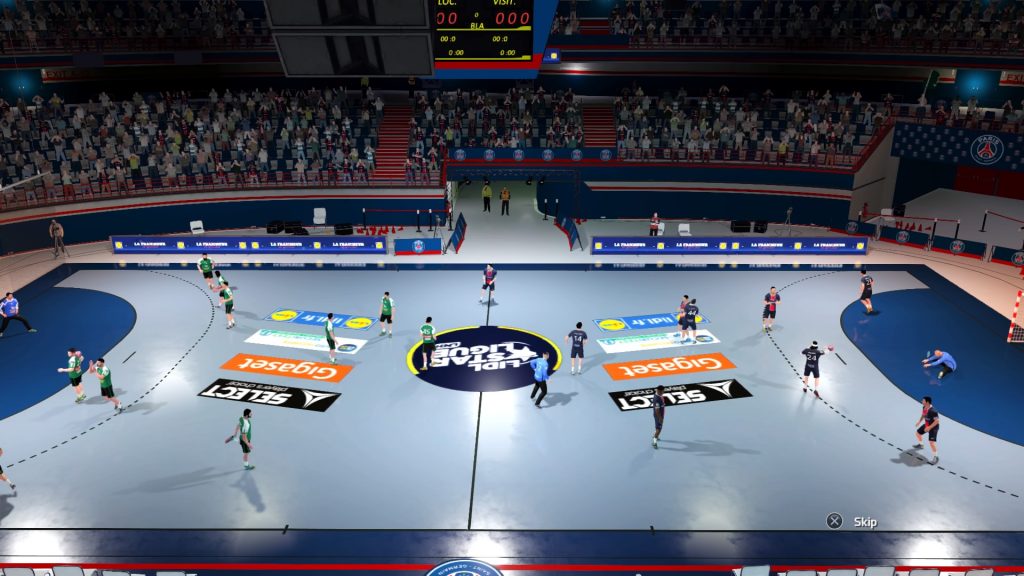 If you do get to grips with Handball 21, the modes on offer are on par with EKO Software’s other sport offerings. You have basic quick-play and league modes and an Ultimate Team equivalent. You earn currency for this through playing the game and card packs can be earned by completing challenges and winning leagues. I enjoy the structure and the idea that you’re always working towards something. If I enjoyed the actual gameplay more, I’d be putting more effort into building my team of world beaters.

As it is, I find Handball 21‘s representation of the sport just a little too clumsy. Some of it is due to my lack of skill but maybe some issues stem from the sport itself. Handball is a rigid game of attack versus defence and I don’t find the game gives you the tools or the education to open space on the court and strike. Defensively, it’s a more effective experience but the unruly goalkeepers can’t really be relied upon.

Handball 21
4 Overall
Pros
+ On-court presentation has a decent amount of colour to it.
+ The license has been well used with good player likenesses.
+ Passing feels responsive.
+ Modes are simple but give you plenty of single-player content.
Cons
- Difficulty for newcomers to penetrate.
- Goalkeepers are unreliable.
- Finding space can be really difficult, even on lower difficulties.
- Very jarring player animation.
Summary
What Handball 21 does well is represent the top of the European table of the sport. Unfortunately, the gameplay and animation can't hold up to the challenge. As a newcomer, I struggled to get to grips with what is a very tactical sport. I find space hard to manufacture and, whilst defensive duties are better handled, the goalkeepers provide a real lottery. I can't complain much about the modes on offer but the clumsy gameplay dampened my enthusiasm. Some training modes could've helped but I found this game tough to penetrate.