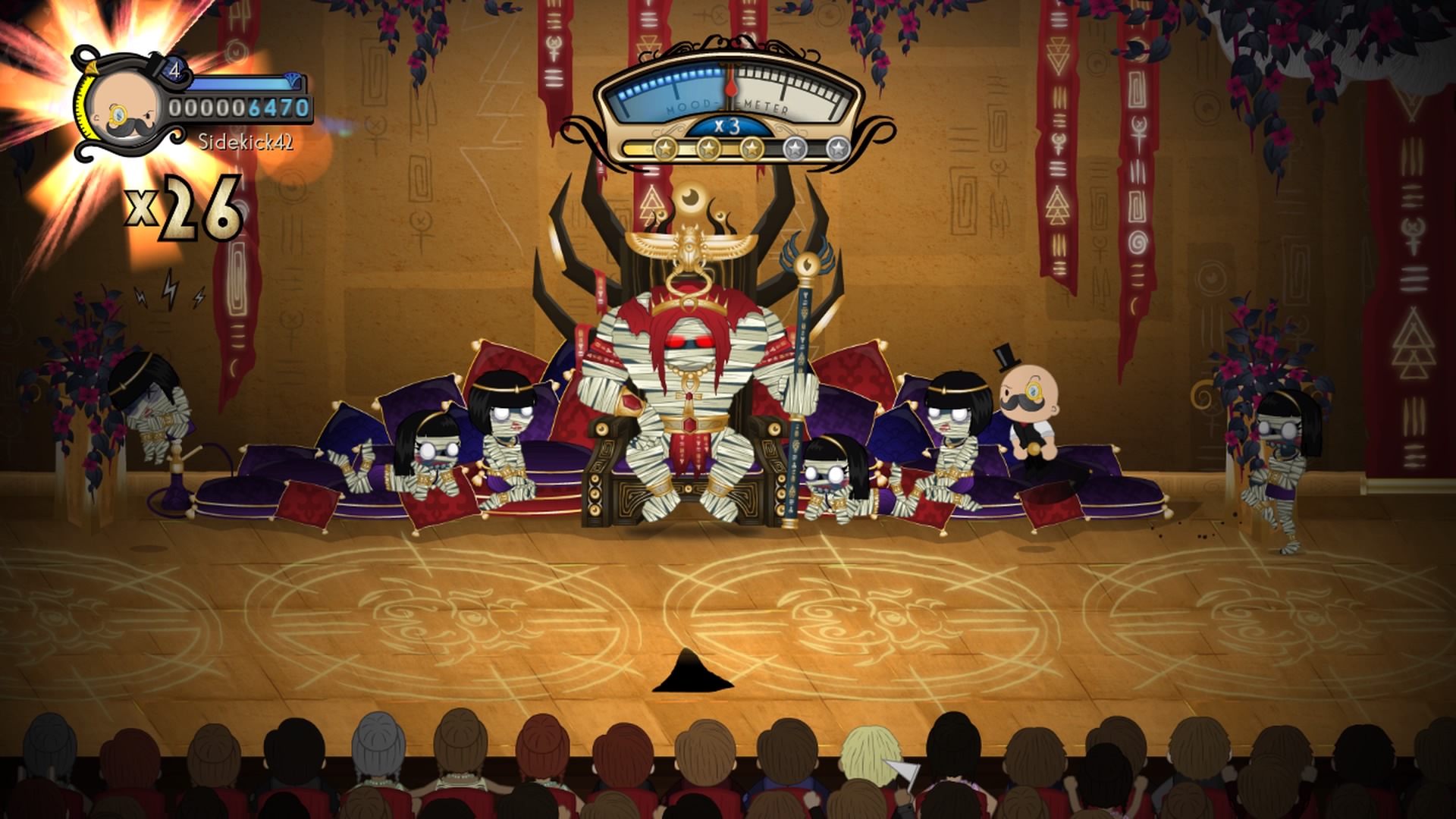 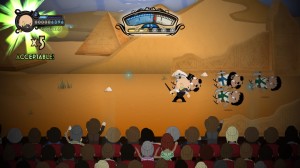 Many times the Victorian era has been used to convey the story of the theatre and it’s not hard to see why.  It was truly a very evocative time with characters such as Sherlock Holmes writers such as Edgar Allen Poe and Oscar Wilde.  Foul Play riffs of this setting for a scrolling brawler with bags of character.

Playing as Baron Dashforth, with a second player theoretically able (more on this later) to join as his sidekick Scampwick, you have to punch, grab, throw and dodge your way through a theatre production of your adventures.  The game is set on a Victorian stage where Baron Dashforth is recounting his perilous adventures in demon hunting to a paying audience.  Each story the Baron tells, see you brawling your way through scores of other actors dressed as demons.  The conceit that this is all taking place in the theatre is continued in how the scenery is changed between chapters, and the way Dashforth addresses the audience.

It’s this audience you have to entertain too if you wish to keep playing.  Instead of a normal health meter you have a gauge which measures the audiences entertainment.  By keeping the action going, and avoiding being hit this gauge will raise, but should you take damage or spend too long not brawling, the gauge will fall.  If this drops to zero then it’s game over.  It’s an interesting system which allows for more forgiving play as you can never feel like you’re punished for taking the odd hit.  Add to this the fact that you have a special gauge which can send your audience approval rating soaring, and the game never seems to be too challenging.  It is all too easy to raise your gauge back again once you’ve taken a bit of a beating. 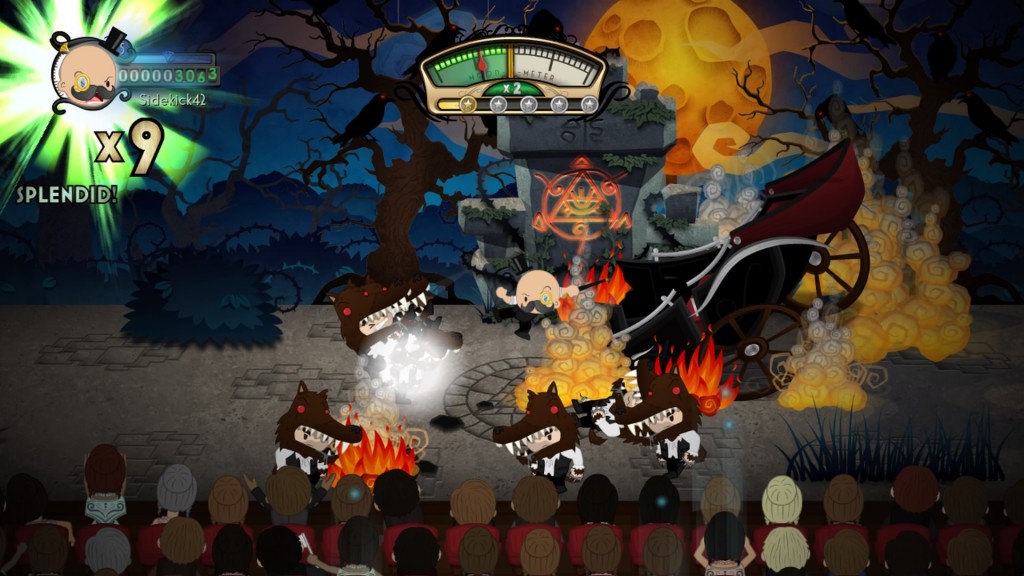 Combat is fairly simplistic mainly consisting of two attack buttons and a parry.  Hitting combos is just a case of mashing the buttons repeatedly.  The parry adds some depth to this as you can grab an enemy and then chose to throw them or hit them some more, but this really is it.  You level up as the game progresses and other moves are unlocked, but these never elevate the combat past its button mashing roots.  Given the simple combat things do get a bit samey, as a result you’ll tire from it sooner rather than later.  There is no real depth to drag you back in. 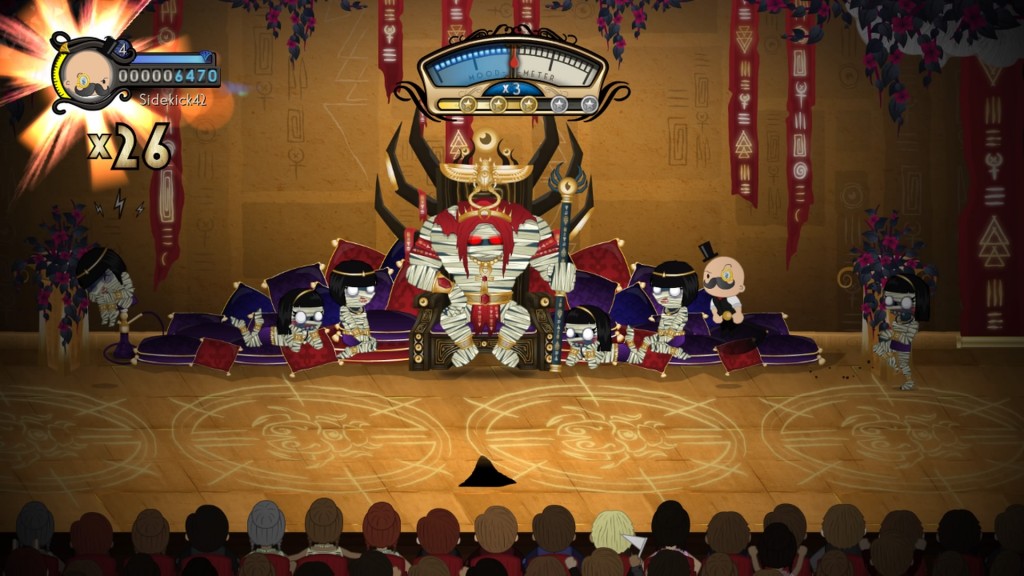 There is a great style and sense of humour on display throughout this game and the graphics look sharp on the PS4 screen, although a little more jagged on the VITA.  The humour comes from the sight of the cast members all dressed up like the monsters, and the odd stage hand getting caught out on scene changes.  The script is also pretty amusing, with both Dashforth and Scampwick remaining in character and providing some decent one liners. 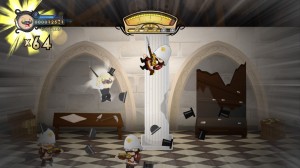 Unfortunately there have been some pretty big issues on this game at launch which affect the gameplay.  The first issue is around cloud and local saving as this is not functioning properly, with saves not being made and progress being lost.  Secondly are the problems in getting a second player in the game, with the system not recognising the second player even when this is on local play.  For a co-op brawler this is a major issue.  These flaws really ruin the experience, and whilst I’m sure fixes are being investigated, at this stage the game is rendered almost unplayable.  If these get fixed them I’m likely to come back and revise my score, but at the moment I can’t recommend this as a purchase.

Foul Play
4 Overall
Pros
+ Looks nice + Has a sense of humour to it
Cons
- Bugs in the way the game saves and in multiplayer render this game almost unplayable - Combat is simplistic and lacks any real depth - Gameplay gets repetitive quicky
Summary
A scrolling brawler with bags of charm and an interesting setting. The combat is simplistic though and the gameplay gets repetitive quickly. Additionally there are bugs within the multiplayer which render the game almost unplayable.