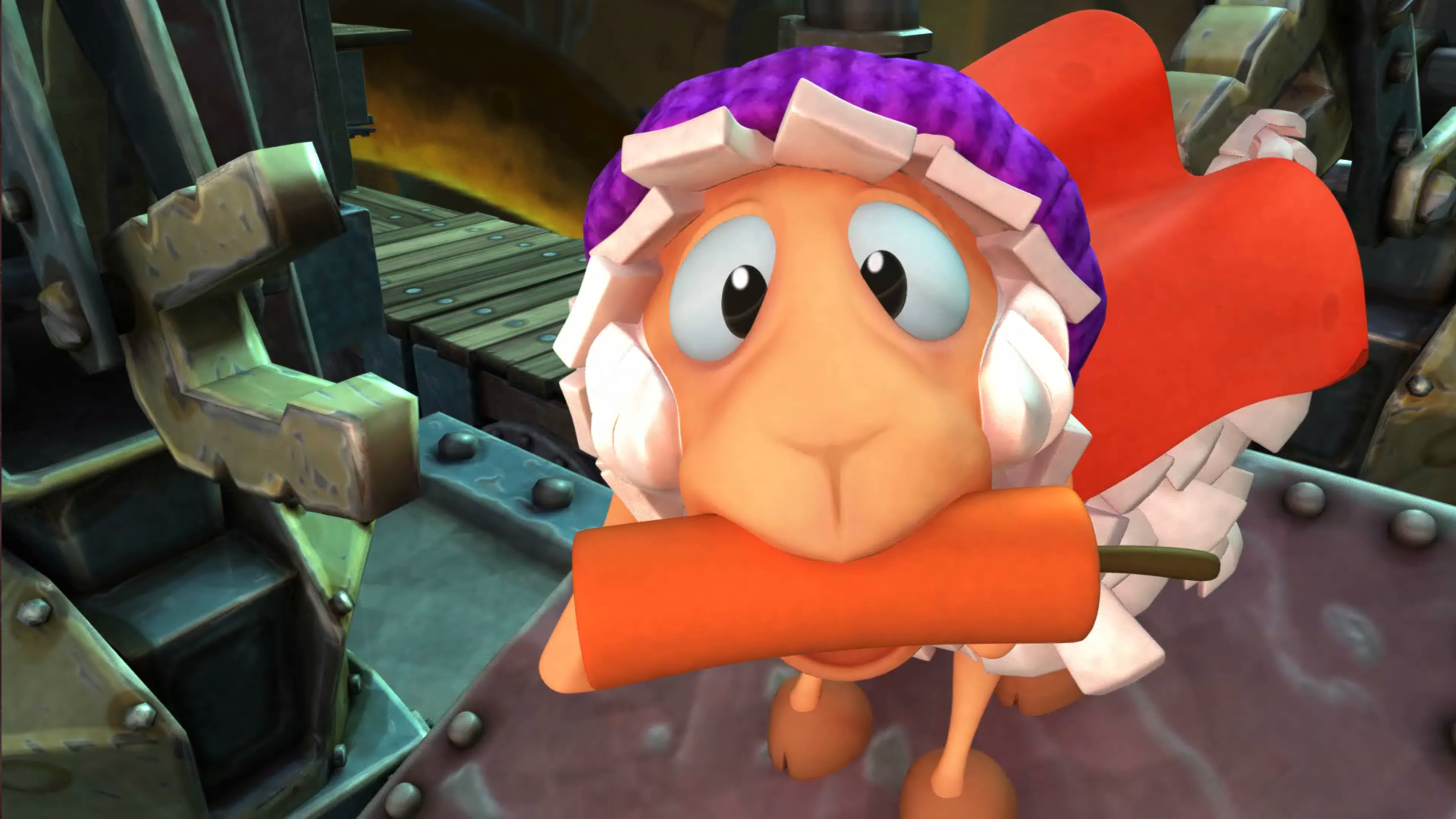 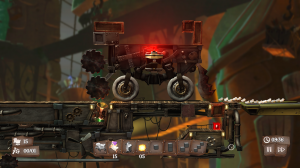 Flockers has a lot of similarities with Lemmings, so lets get that out of the way. Chances are that if you have been researching this game of fluffy martyrs then you will have come to that conclusion already. Is there more to it though? And is it good enough to live up to DMA’s celebrated legacy?

Team 17 have opted for a slightly different approach. Instead of of hapless green haired rodents they have elected to represent the cute and mindless creatures with harmless, fluffy sheep. This may all sound cute and happy go lucky but Flockers takes the violence of the 8 bit classic and chucks in more blood than an Evil Dead sequel. The blissfully unaware sheep gamble their way into spikes, menacingly large buzzsaws and crushing traps. Its not unusual to witness sheep explode into mutton at a moments notice and it fits in well with that maniacally dangerous atmosphere that Team 17 pull off so well.

The game deserves a special mention for its darkness, not only in the gore but also the graphics and sound departments. Everything has that Worms charm with drab backgrounds and tuneless chimes playing a very effective and foreboding contrast to the cute sheep as they wander to their potential demise. The levels in the game have four major themes, ranging from blood soaked abattoirs to lush greenery and each have hazards that represent their background. That may seem a little limited and barebones and it is when you consider there are only 60 levels of content presented in the full package, most of which can be completed in the first try until the latter half of the game when your mettle is tested. Though the music fits the atmosphere I did find it getting extremely repetitive and just a little dull, I can understand that they probably didn’t want to include epic scores or the bouncy circus music that would ultimately ruin concentration but it’s incredibly unmemorable and that is a damn shame.

Abilities work much in the same way as Lemmings albeit with a cut down selection. There are two ways to gain abilities for your sheep to perform, either they are dotted around the levels for the sheep to pick up or they are given straight away at the beginning of the level. The selection of roles you can give your sheep range from Purple hats that will give sheep the ability to jump over small gaps, red capes will allow sheep to fly up vertical obstacles or my personal favourite; the explosion ability which detonates a sheep at your will. Instantly evoking nostalgia for those “sod it” moments when you decide that your emotions have had enough for the day and the nuke button gets all that more tempting. 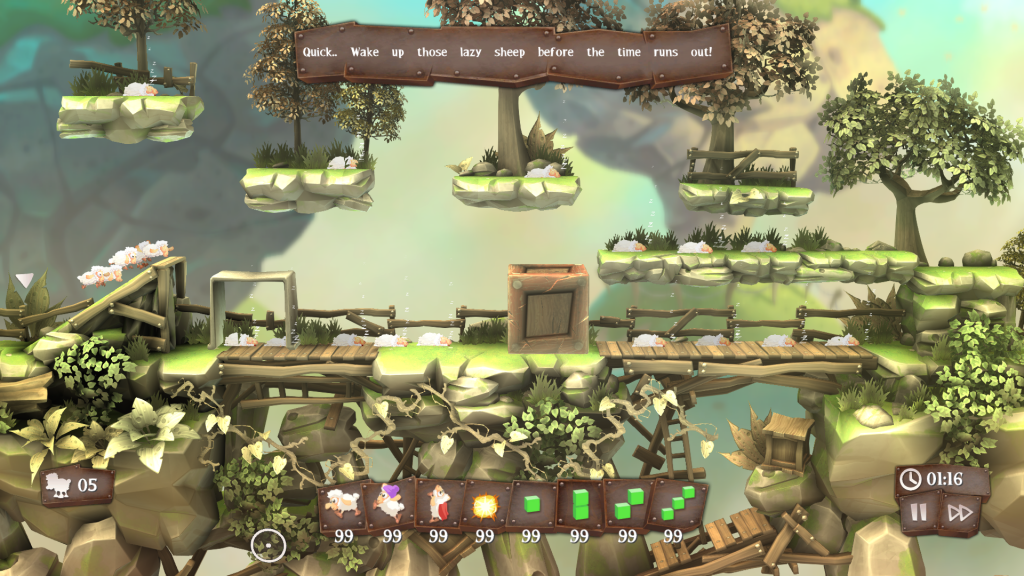 The abilities are limited to only a few actions and formations the cut down selection adds to formulating strategies more so than the baffling selections provided by similar games. The onus is less on which ability works in which spot and more in how you use a certain ability with constant reminders to think outside of the box in the later levels. For example you could use one of your valuable three sheep staircase formations to allow a herd to climb to potential safety or you can use a two sheep staircase and detonate the lower critter to catapult the one on top to higher ground and to scout for potential upcoming dangers or to search for more ability crates. Considering this is a A to B puzzle game I was impressed with just how much exploration is a part of it, while the levels may become more frustrating for some I find that it is a great idea that rewards experimentation and Flockers is better off for its addition. The only thing I would have asked for is maybe more abilities as the game progressed. 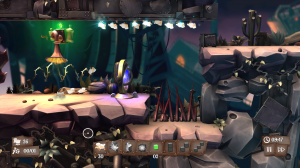 Something that bugged me while I played was the lack and use of features that was and wasn’t used for the PS4 in particular. The game plays certain sounds through the controller’s in built speaker as you play, ranging from the bleating of the sheep that you are hovering over with your cursor or a clear sound which plays when you give a sheep an ability. The light bar on the controller also comes in to play. It will change colour as you select different abilities from your toolbar; the light bar will turn red when you have full depleted your stock of a certain ability and it can be handy when you are focussed on the television and catch the colour with the corner of your eye. Although the sounds can get a bit tiresome and will likely make you turn the volume off the speaker the lightbar actually comes in useful. What really surprised me is the fact that the touchpad was completely unused. Considering that the game uses a point and click mechanic, which granted functions absolutely fine on sticks anyway, I was amazed to see that you couldn’t use the touchpad for moving the cursor around as an option. I can only hope that this feature would be considered for future instalments or updates as I feel that could have made reacting to certain situations a lot quicker and easier.

Flockers
7 Overall
Pros
+ Solid gameplay, controller works well despite the point and click nature. + Graphics are foreboding and suit the dark comedic atmosphere well. + Sending a flock of sheep to their gruesome deaths can be an excellent stress reliever.
Cons
- The soundtrack is dull and repetitive. - Features of the PS4 controller could have been explored more thoroughly. - Not really enough replay value unless you want to get 3 stars on each level.
Summary
Despite its flaws, Flockers is a very good addition to the A to B puzzle genre and a solid first attempt by Team 17 as they take on DMA's classic. With a bit more work in the sound and features department the game could easily be as good as Lemmings.