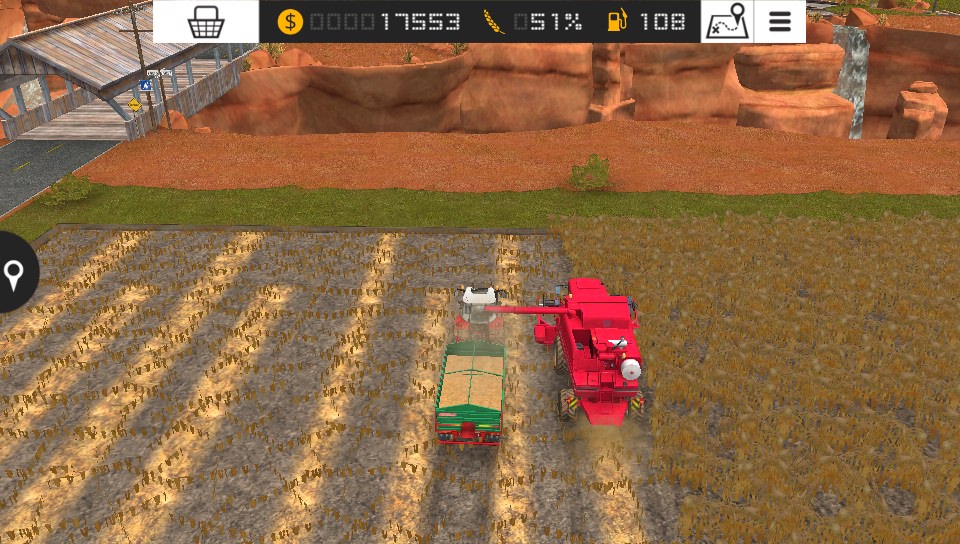 I’ve been a fan of the farming game scene since Farming Simulator 15 which was released all the way back in 2014 for the PlayStation 4. Since this time we’ve had number 16, on the Vita, and number 17, on the PlayStation 4. I was very interested to see if anything had changed for this latest annual installment and to understand how the portable version differs to the home consoles.

For anyone who hasn’t played a Farming Simulator game, you control a farmer and that’s about it, there are no specific plot points or goals to the game. You just look after your crops and animals and sell these to earn money which in turn allows bigger tractors and farm machinery to be bought. It is also a very dry game, there is none of the whimsy you’d find in things like Harvest Moon. 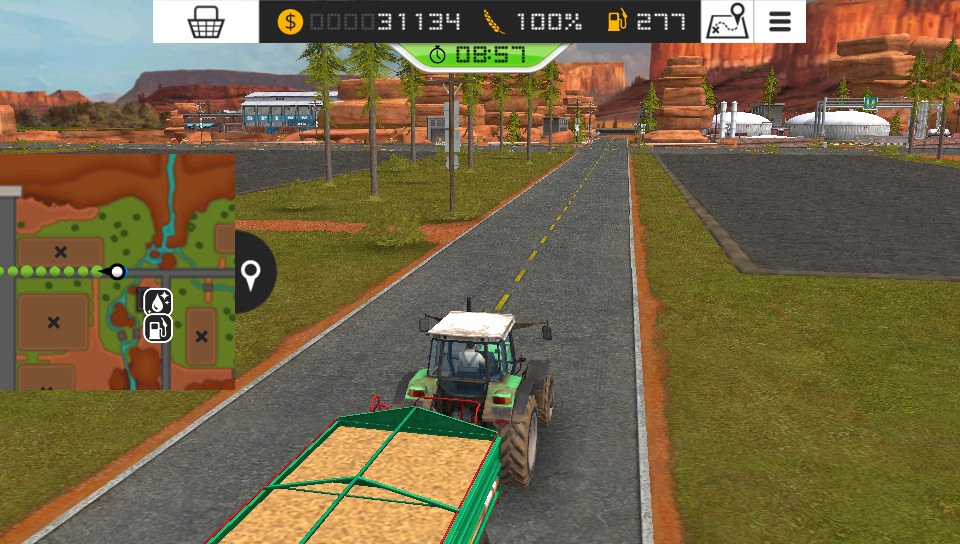 Farming Simulator 18, in keeping with the previous Vita release, is also available on the 3DS. So bearing this in mind this portable version is not the same game as the home versions and is significantly simplified. The most amazing thing though is the fact it still manages to pack in quite as much as it does.

To start with here there is only one farm site to choose from, scaled back from the multiple choices from the home console editions. Action is also viewed from a third person perspective only, the first person mode isn’t available. The graphics are also serviceable at best and the day and night cycle lacks the gorgeous sunsets and early morning mists.  Based on this my initial impressions were a bit disappointing as it definitely feels like a cut back version. Sticking with it though and I found my groove and started to see this for what it was, a complementary game to the home console editions.

You start the game with two tractors, a harvester and equipment to sow more crops. The cycle of this game is planting crops, waiting for them to ripen then harvesting them. To start with there is a fair bit of waiting round to be done as the crops grow. This is another departure form the other games as here you can’t increase the clock speed to make this waiting game pass quicker.

As you progress, buying new fields and better equipment, the odd random quest may pop up asking for certain deliveries to be made but this is the only variation to the cycle of taking produce to market. The produce you can sell includes a full range of crops and lumber as well as livestock in the way of cows, pigs and sheep. Each kind of crop or animal needs certain kinds of machinery to harvest and this forms the upgrade cycle. 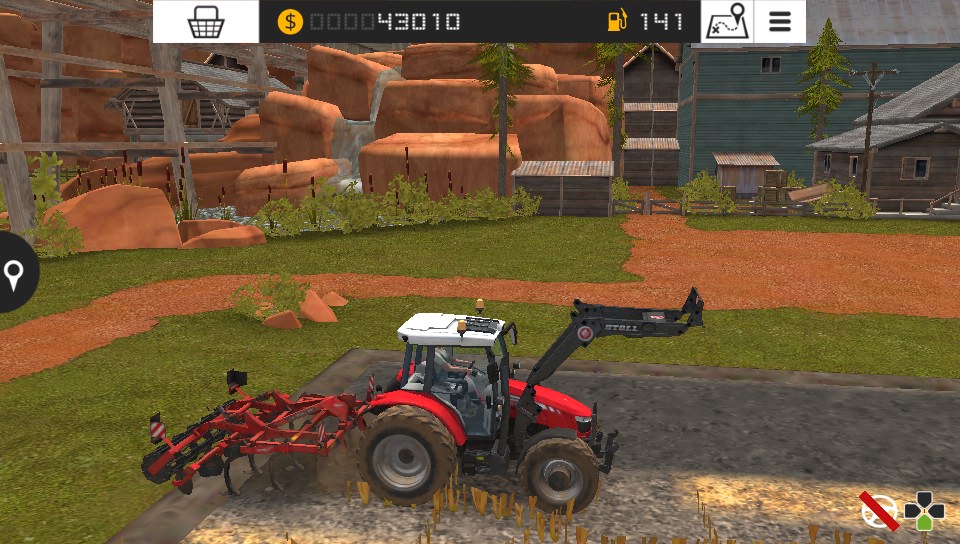 Control has been optimised for the touch screen and most tasks can be competed here, from buying equipment through to moving the camera and scrolling across the map. The controls are also simplified from the complex home console entries which I personally found to be a great change. Farming Simulator has never had great tutorials and has always had awfully complex controls, but in Farming Simulator 18 all actions have a single button solution and personally I found this to make the game play much better.

I’ve mentioned above how the graphics are not the greatest and this is true, however there is a mismatch between the detail on the tractors and the detail on the rest of the environment. The tractors carry a decent level of detail and the ability to zoom in to them allows these to shine, all be it in an overall low quality way.

Farming Simulator 18 also carries over the helpful addition of having hired help to provide assistance in the field. The hired help not only automate ploughing and harvesting but this time can also be used to refuel and go to the carwash. These are only small usability improvements over the home console versions but they do make the gameplay better and less grindy. 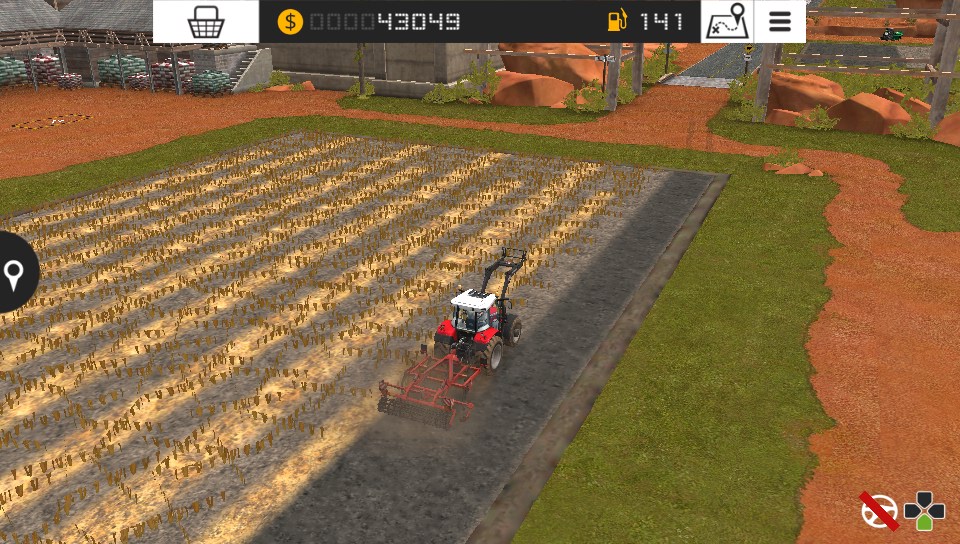 Whilst Farming Simulator 18 has kept most of the crops and a wide range of the tractors it has lost out on the additional features like being able to place greenhouses or wind turbines. These omissions were keenly felt by me in particular as the wind turbines have always been a decent source of steady income.

This portable version then is a surprisingly full package, if in a bit of a cheap wrapper. It has all the elements which make Farming Simulator strangely addictive, the slow pace and sense of accomplishment when you bring in a full field of crops. It also remains a very grind intensive game and progress is marked solely by getting more money to buy bigger machines to allow you to more efficiently generate more money. How much enjoyment you’ll get out of this incremental progress will dictate how much you enjoy this game.

Farming Simulator 18
7 Overall
Pros
+ Overall this is a great version adapted for portable play
+ Touch screen controls make some positive usability improvements
+ There is a gentleness to the task of running the farm
Cons
- The whole game is a huge grind to make more money and buy tractors
- The game has no action or excitement and is quite dull
- Graphics are serviceable at best
- This doesn't have the static items, such as wind turbines or greenhouses
Summary
This portable version offers a surprisingly full package, if in a bit of a lower quality wrapper. It has all the elements which make Farming Simulator strangely addictive. The slow pace and sense of accomplishment when you bring in a full field of crops. It also remains a very grind intensive game. How much enjoyment you’ll get out of this incremental progress will dictate how much you enjoy this type of game but we rather liked it.