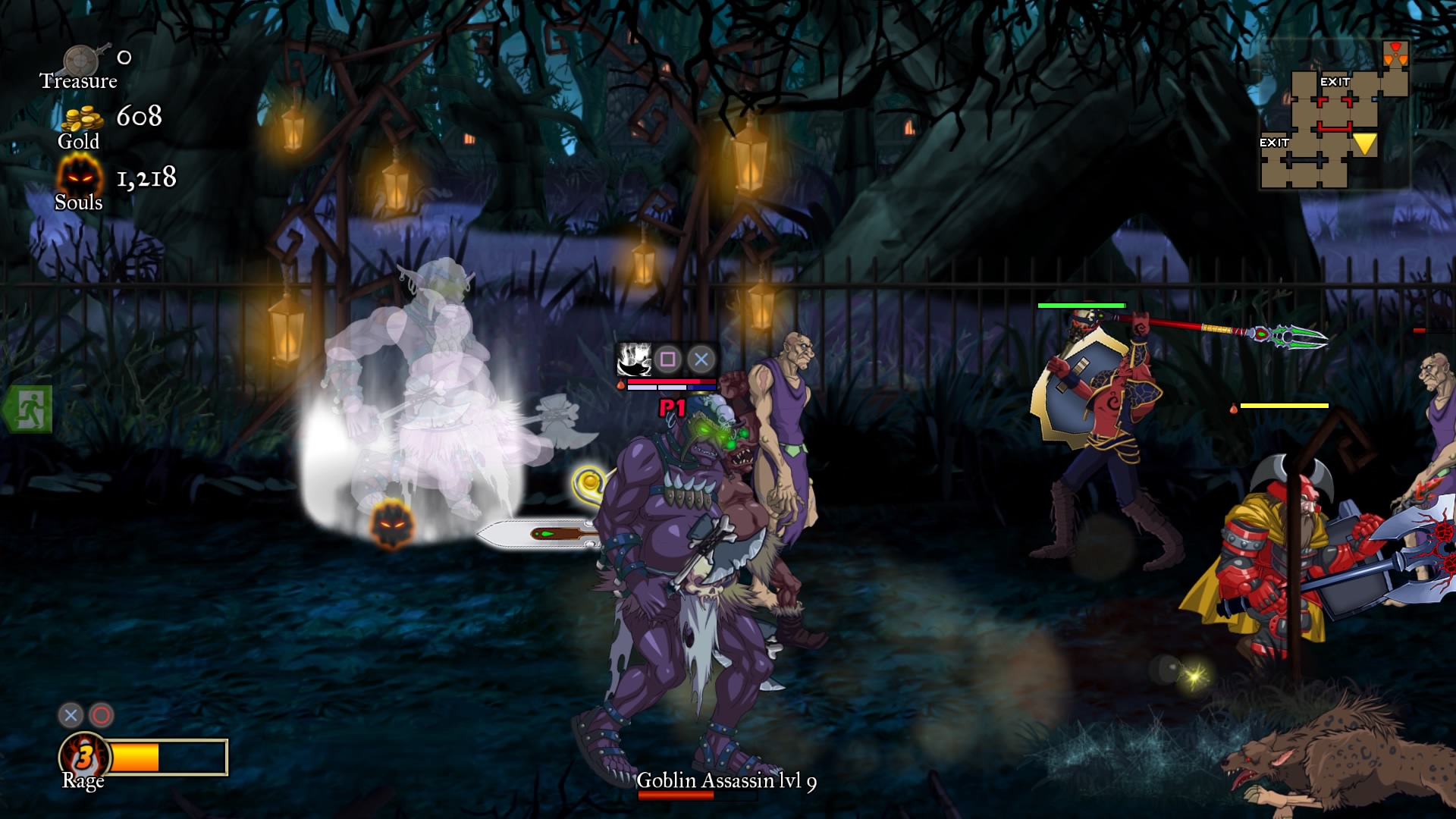 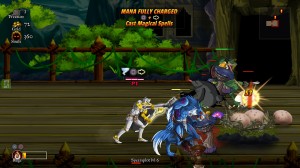 Dungeon Punks is a side scrolling 2D brawler with RPG elements from Hyper Awesome Entertainment. The tag line is ‘tag team brawler RPG’ which may get your mind wandering as to what this might actually entail. That’s what I’m here for.

The story isn’t that important although there are talking head cutscenes between each level. It’s more the tone of the story that’s important in that it isn’t that serious. Your characters are part of a mercenary group although you never hear them speak, it’s the characters you talk to that push the story along. You’re taking on jobs for royalty and the like but like an episode of Some Mothers Do ‘Ave ‘Em even though you think you’re doing well things keep going awry. It’s just an excuse to explore dungeons at the end of the day.

You can select from one of six characters initially though as you get further in the game you unlock the rest for use. You then travel through dungeons in a fashion similar to Dungeon Fighter LIVE. The visuals are 2D but you can move up and down the screen battling enemies of different shapes and sizes. Once an area is cleared you’ll be free to move to the next screen which could mean walking up, down, left or right off the current screen with a map in the top right filling in as you go. The maps are preset so they’ll be the same every time and have branching paths.

The level ends once you kill the boss at the end but you can revisit levels as often as you like. Within the levels you will often find NPCs who will give you side quests to complete in that area. They could involve destroying egg sacks or killing a certain amount of enemies and will net you extra experience and money for doing so.

Experience levels you up automatically when you leave a dungeon. You can leave a dungeon early if you’re running low on health or even if you die you still get some experience so no run is a complete waste. You’ll also find loot during levels but not a huge amount, you’ll have to spend the money you earn in the shops outside of battle to fully equip your entire roster. 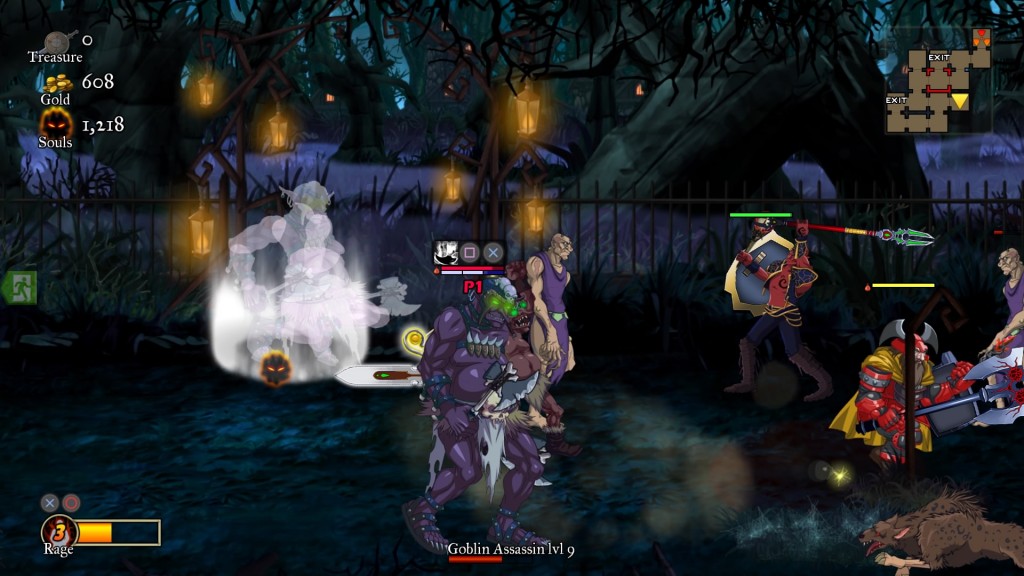 As the tag line I mentioned earlier suggests you can take all your characters into battle. Three characters will be active at a time with you controlling one and the AI or two local players (no online co-op I’m afraid) controlling the others, but there are six characters so every player doubles up and can tag in another character. As a character is off screen they charge up a mana bar which means you don’t have to fill it up the usual way of attacking enemies and can start firing off specials straight away, you can even make your own combos this way with some clever timing.

Other than that you just have a basic three hit combo, a block and you can pick up items in the field. Some of these will be one use like a potion for healing or the ability to summon a dragon, but you can build up a rage meter by collecting fragments. Much like Golden Axe‘s magic system you can use your rage after only picking up one fragment but it’ll be pathetic, whereas if you fill up the bar then you can fire off a screen clearing attack that will devastate all your foes. Much like Golden Axe you can also find mounts that can give you the edge in combat.

You’ll probably need that edge as in my experience of Dungeon Punks you’ll struggle on a level for a while, have to slowly make your way through completing an objective, leaving to bank the experience before going back in and repeating until you complete the level. Once you do complete the level I found that the next one or two levels would be easier before you hit another wall and have to grind again.

It’s a frustrating difficulty curve as when you’re going through levels relatively smoothly the game is fun and you’re levelling up and getting new gear which is always a decent jump in power as they go up in levels but when you hit a dead end you can be coasting through a level and the next thing you know your buddies are all dead and all the enemies just swarm at you and you go from full health to dead in double quick time. Especially when you’re playing alone. 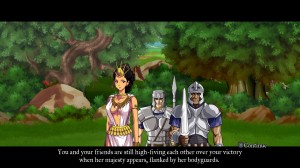 The AI isn’t great, they will attack and use their abilities but they’ll also steal potions and walk into environmental hazards. Thankfully any gold picked up goes into one pot so them hoovering all that up isn’t so bad. Playing with friends would be best and will probably make the game more entertaining too, either making the grinding more interesting or simply being easier with two humans backing you up.

However the smooth levels ultimately outweighed the ones I struggled with and the fact that levelling up does actually feel like it makes a difference is a big help. Online co-op would have been great and a smoother gradient through the levels would have been appreciated but Dungeon Punks has a decent personality which helps to overcome these other grievances.

Dungeon Punks
7 Overall
Pros
+ Good amount of levels + New weapons are noticeably stronger + Lots of characters to try
Cons
- Monotonous gameplay by yourself - Difficulty curve is up and down forcing you to grind - AI isn't great
Summary
Dungeon Punks is an enjoyable hack and loot take on Golden Axe and other 2D brawlers. The difficulty will spike on you a little too much and it's not much fun to play alone but if you can get a friend over, this is a pretty enjoyable game.
We use cookies on our website to give you the most relevant experience by remembering your preferences and repeat visits. By clicking “Accept”, you consent to the use of ALL the cookies.
Cookie settingsACCEPTREJECT
Manage consent