When it comes to genre-defining, all-time classic coin-ops, it doesn’t get more iconic than Taito’s famous Bubble Bobble series.  The series has been punctuated with iterations ever since it’s original 1986 release, certainly more than the three that Bubble Bobble 4 Friends dual meant title suggests.  To be honest, the story of the Bubble Bobble‘s series is far too complicated (check out this excellent article by Stuart Campbell for the full history) but if you’re new to the series, here is what you need to know.

Bubble Bobble was the original game and was a single screen platformer where you’d use bubbles to trap enemies before they could crash into you.  It was known for its cutesy graphics, intuitive gameplay, some intense difficulty spikes and great co-op.  It was followed up by Rainbow Islands (a brilliant vertically-scrolling platformer with some annoyingly difficult bosses) and the lesser-known Parasol Stars (lesser-known because it didn’t get an arcade release).  Bubble Bobble and Rainbow Islands have been revisited with ports and remakes over the years but they’ve often felt a bit ‘off’ and are often hampered by ugly visuals that didn’t capture the spirit of the originals.

So, onto Bubble Bobble 4 Friends.  This game is nominally the fourth in the series (kind of) and also a four-player game.  For clarity, we reviewed it in one and two player modes because, if you hadn’t noticed, we’re in a lockdown.  But anyway, the game essentially has three parts to it that are all variations on the same theme. 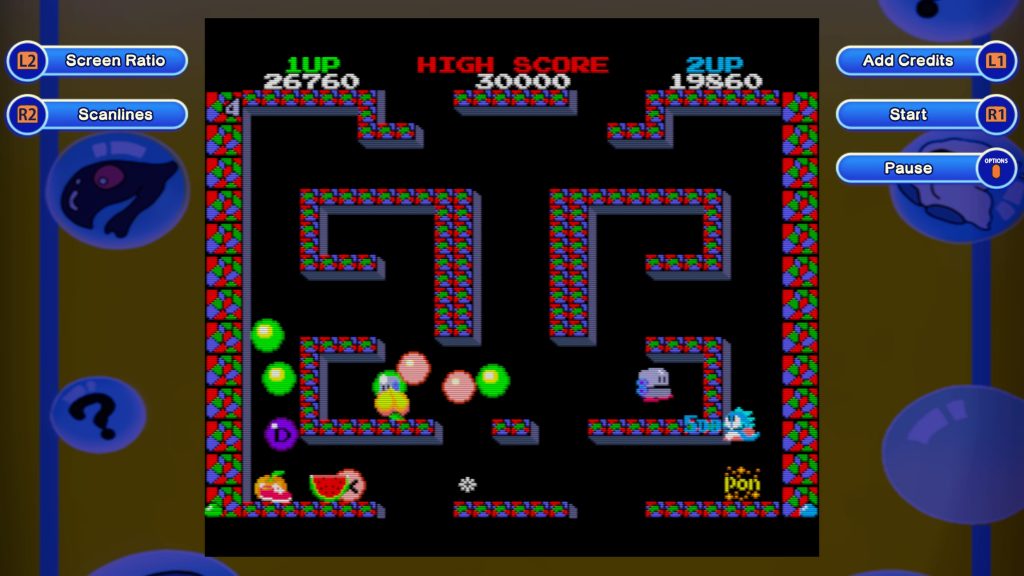 Before the main event of the game’s primary campaign mode, there is a full emulation of the original Bubble Bobble arcade game.  This offers players unlimited continues which allows even novices to get through the daunting task of beating this old classic.  How does it play today?  Well, it’s okay.  The DualShock 4’s analog controls make it a struggle but with the d-pad it’s not too bad.  However, at over 34 years old, it is starting to get a little long in the tooth.  It’s nice to have it there but the controls feel clumsy, the visuals have dated quite hard and the gameplay can be quite frustrating.  Nice to play through once or twice but not something that we see ourselves returning to very often.

The game’s main mode is a modern take on the formula.  As before you, and your co-op friends, are placed on a single screen level and you need to kill all the enemies.  You do this by blowing bubbles at them which trap them.  Those bubbles then need to be burst (by jumping up into them or pressing down when on top of them) which will destroy the enemy.  Failure to do that in time will see that enemy released and in an enraged state where they are faster and more dangerous.

As with the original, bubbles float around based on fixed air currents although now you can actually see where those currents go which helps you plan things.  The only other additions are some annoying spike traps that will kill you and five bosses which range from trivial to very difficult to beat.  That’s the Rainbow Islands influence and, for us at least, the boss battles are the worst thing about the game (which is true of Rainbow Islands and Parasol Stars to be fair). 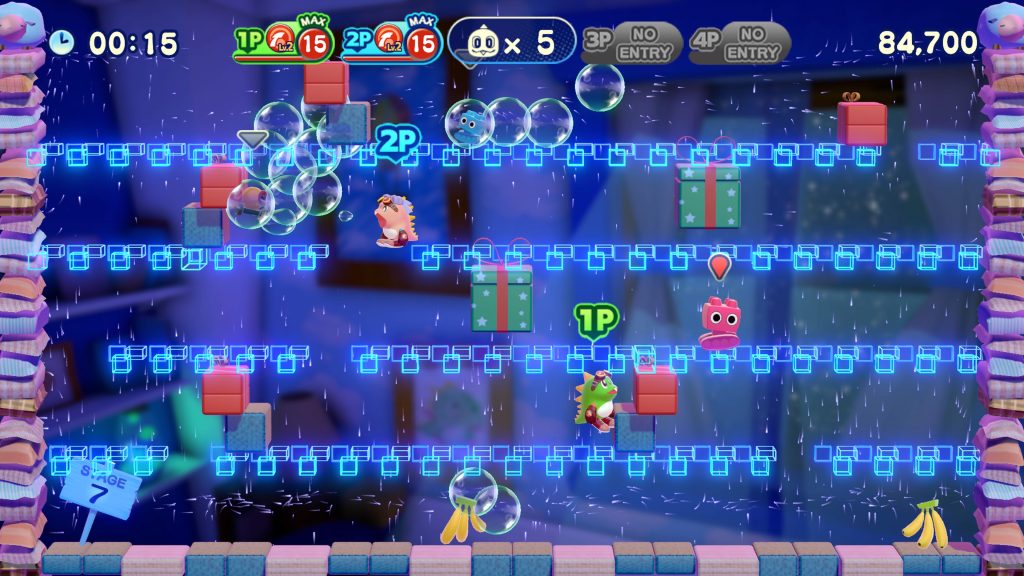 On the plus side, this mode plays nicely.  It’s familiar but the level designs are better than the arcade original, with smaller, less populated stages that focus a bit more on strategy than raw arcade skill.  The only knock on it is that it’s all a bit samey after a while with the individual stages not really having much character to them when compared to the lovely variety of looks that Rainbow Island’s ten worlds had.  But visually speaking, this is to Bubble Bobble what Pac-Man: Championship Edition was to Pac-Man.  Clean, modern, colourful and stylish.  We love neo-retro visuals and this game delivers some nice looks without resorting to looking like a pixel-art throwback or a beefed-up Adobe Flash game.   The sound is pretty good too with a nice update to the original music as well as other breezy tunes that will entertain you (or have you rushing to turn them off as they can be very incessantly cheery).

What we didn’t like is how sometimes the background looks too prominent, tricking you into thinking that parts of it act as platforms.  They really haven’t done a good job with that, especially in stages that have near-invisible platforms.  The original game used black backdrops and while it wasn’t very exciting, it did make things a bit clearer.  This isn’t a huge problem but it was apparent during our first playthroughs of the game.

Another new wrinkle to the gameplay is that when you beat one of the five worlds of the game (each world has nine stages and a boss battle), you are awarded with a power up.  These are mostly useless, offering such upgrades as exploding bubbles, a dash move and extended shooting range.  However, these can be improved if you collect the lettered bubbles that spell out EXTEND (another nod to the original game where doing that would award you an extra life).  This gives you some reason to go back and replay the worlds, as does the three star scoring system that needs you to chain together kills in order to get the best scores. 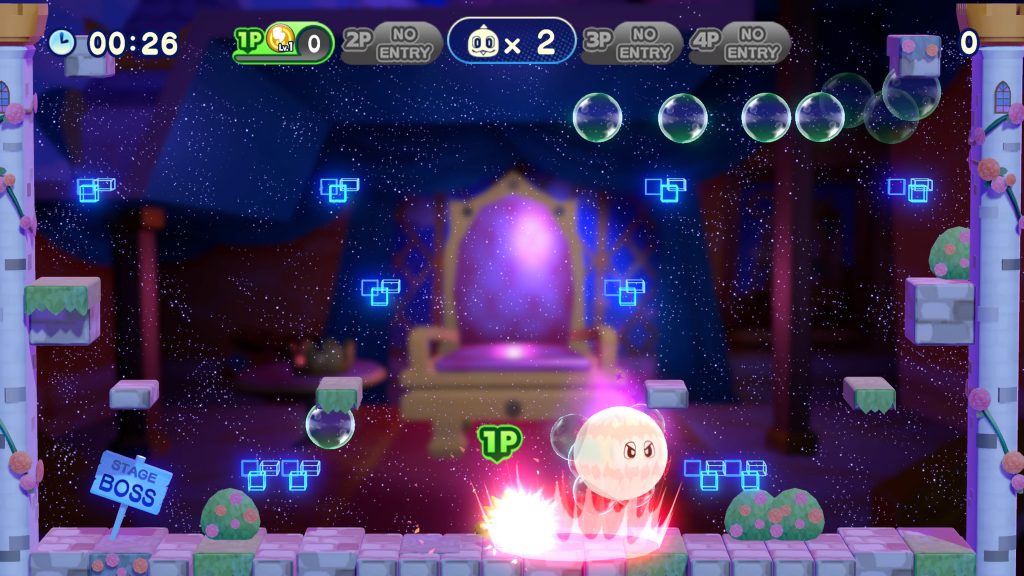 Beating the whole game, which is made easier by offering you continues when you die and even an invincibility option if you die a lot, then lets you replay the same worlds on Hard difficulty which adds more enemies and puts all of them into that enraged state.  This improves the normal levels but those boss battles really don’t need to be harder.

Co-op does help a bit with that but we’re not sure it improves the game.  The original Bubble Bobble seemed perfectly built for co-op but the levels here often just have one path through them rather than allowing you to really split up and share the workload.  This really leads to you get in each other’s way, popping each other’s bubbles and blocking parts of the stage from view.  It’s fun but we found solo play to be more optimal.

So that’s the original game and main campaign modes covered.  All that remains is the ‘Arcade of the Future’ mode.  In the game’s main level select screen you have the five worlds and the original arcade mode, represented by a recreation of the original Bubble Bobble arcade cabinet.  Selecting that mode in Hard difficulty puts you into this new mode which is the best thing about Bubble Bobble 4 Friends.  Here you have to play through a sequence of levels with no option to continue and these play more like an updated version of the original arcade game. 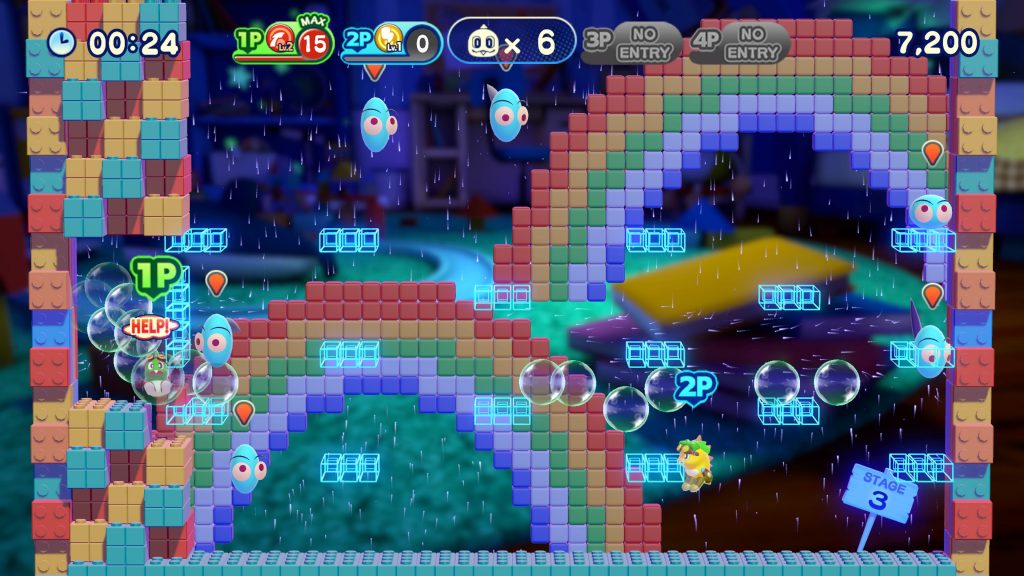 It’s very arcadey and very familiar, but all action.  It’s the closest you’ll get to how you might have felt playing the original arcade game back in the ’80s for the first time.  This is the mode we’ll likely be dipping into whenever we play Bubble Bobble 4 Friends in the future, especially when we can finally get four of us onto one couch.

Overall, this is a nice update to the series.  It feels modern but classic, authentic but new.  As ever, the boss battles spoil the party a bit but the game is very relaxed about letting you get past them with continues meaning that casuals can enjoy the game’s simple charms while hardcore arcade players can work towards getting the best scores.  The inclusion of the original game is a great touch too.  So if you’re a fan of coin-op classics, platform games or cute bubble-blowing dinosaurs, you’re pretty well catered for here.