Not only am I not a games developer but I’m pretty sure that if I devoted myself one hundred percent to learning how to make them, I wouldn’t be able to make something capable of being sold on PSN if you gave me an entire year off to learn the skills and another year to make a game.  But, with that in mind, I’m pretty sure that I’d never make the sort of design decisions that Boiling Bolt makes, no matter how potentially bad I would be as a developer.

The game itself is a fairly ordinary twin-stick shooter and comes to us by way of French developers Persistant Studios.  It’s a little different to most of the twin-stick shooters that we review on here but the most obvious comparison can be made with Resogun, Housemarque’s peerless PS4 launch title.  As with that game you are in a little ship that can move left or right (although in Boiling Bolt you are generally heading to the right as opposed to looping around the level) and can shoot in either direction . 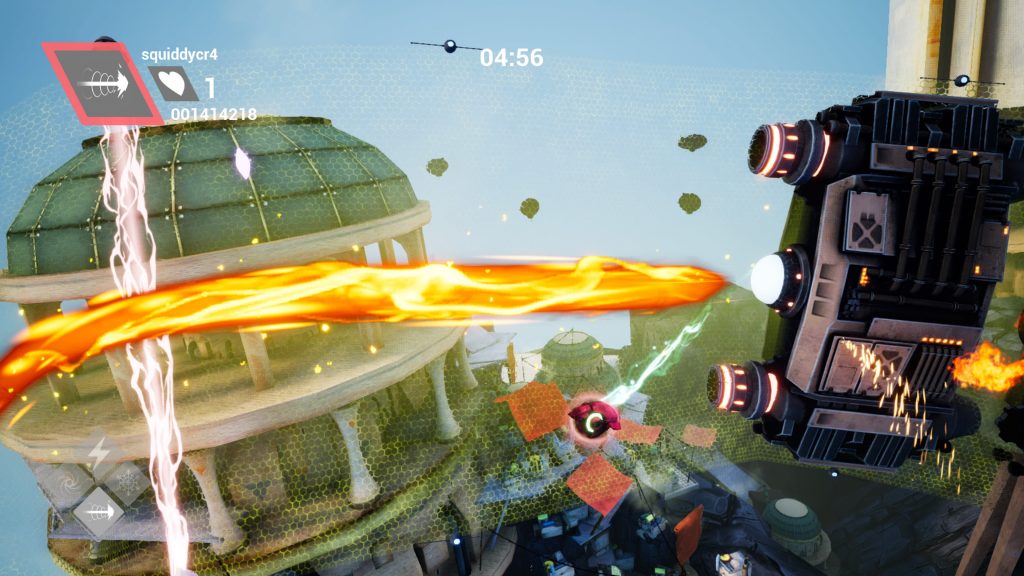 The first odd design choice is to limit the play area to a narrow strip that comprises of just over a third of the screen.  Anything above or below that is off limits, like you’re playing a ZX Spectrum game that is trying to save a bit of processing power by only redrawing part of the screen.  This part of the screen is almost like a track that you play along and you can move left or right (using the left stick) and you fire and aim with the right stick.

Enemies slide into the play area from the left or right and so shooting them should be as simple as being on the same height level as them and shooting, however this is complicated because of the weird stylistic decision to warp the track around in three dimensional space.  You’re still playing on a 2D plane but the space itself is unnecessarily warped.  It looks vaguely interesting but doesn’t help the gameplay at all.

You also have four secondary fire modes.  Two of these offer the 360 degree aiming (albeit with less range), one gives you a clumsy black hole weapon and the last is a shield, these are mapped to the right trigger and have variable levels of usefulness but can come in handy, even if they can feel a little unnatural to use in heavy combat.  The left trigger is mapped to a fairly useful dodge move that can get you out of trouble and will cause time to slow down if used effectively.  Unfortunately, the limited play area and the weird screen warping sometimes make using it a bit of a leap of faith. 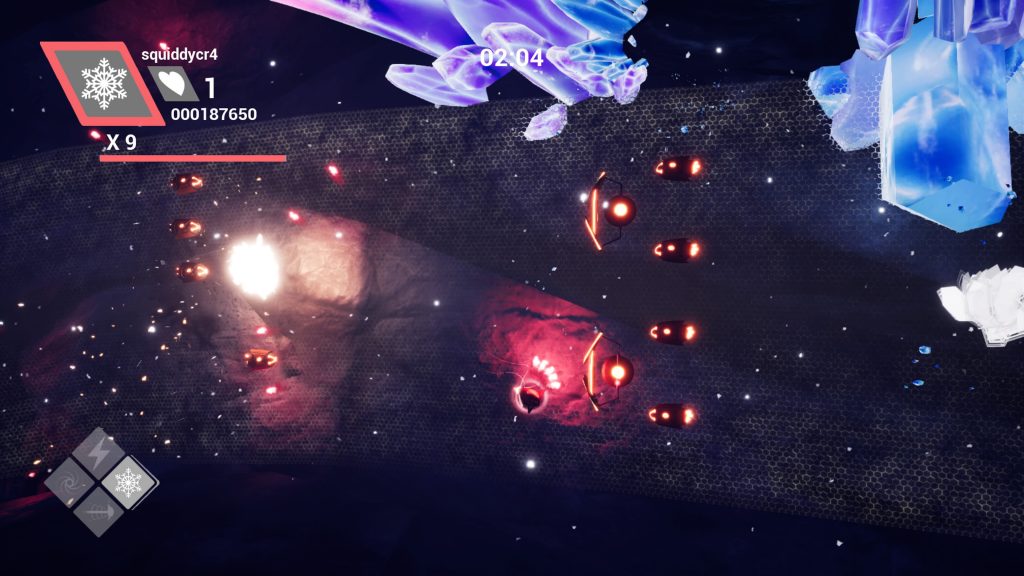 Once you’ve got the mechanics down, the game either has you heading right, shooting through popcorn enemies on your way to the big boss of each of the game’s five stages, or you’ll be trapped in small areas and forced to clear waves of enemies until the game decides to release you.  It’s nothing special but the game is fairly capable during these sections but it’s all pretty pedestrian too especially compared to some of the great shoot ’em ups we’ve had on PSN so far.  The boss battles break things up a little but can be initially a bit unfair as their attack patterns aren’t always immediately obvious.

Each section of the game gives you a rating.  My first attempt at the game’s first section saw me awarded with a D rating, whereas a perfect run through with me not dying, not missing any enemies and keeping my score multiplier active got me a C.  So I’m not sure what that’s all about.

You get two lives and three credits with which to get through the whole game and it soon becomes apparent that this may not be enough as Boiling Bolt can be pretty tricky.  This is where the game’s upgrading mechanics should come into play, and bear in mind I’ve just put dozens of hours into Sky Force Reloaded which is all about that kind of thing.  Unfortunately, this is where Boiling Bolt really drops the ball. 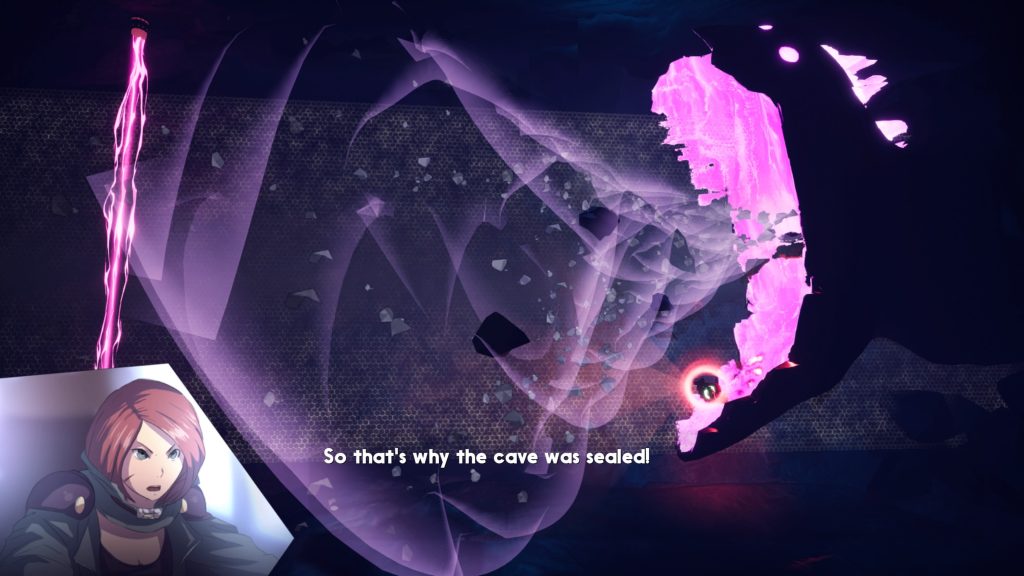 A shop screen show allows you to buy modules that improve your strength (attack), defense and speed.  You can also upgrade your main gun.  The problem is that the game gives you 250 crystals (the in-game currency) which is good enough to buy the most useful stuff right away.  The ‘Super Spread Shot’ weapon (which you’ll want because it shoots five bullets at a time and, unlike the default weapon, can actually be aimed in all directions) and the ‘Ultra Strength Module’ (which offers the best attacking power) can both be bought right away and given that all the modules decrease other stats, none of them are particularly desirable anyway.  Power-ups shouldn’t make you worse at things.  There’s no sense of progression here at all.

If shoot ’em ups are going to keep things simple then they need to be either incredibly well-designed, incredibly dramatic in terms of the on-screen action or just aesthetically-pleasing and Boiling Bolt is none of these things.  Even when the screen is full of bullets, it never feels exciting.  Enemies die in little explosions and your bullets feel weedy.  It’s been almost thirty years since R-Type filled screens up with devastating laser fire and yet some developers still haven’t realised that players want that feeling of empowerment.

Visually the game makes an effort to make each level a little different to the last but the generic enemy designs and general low level of quality makes the game nothing special to look at.  A few particle effects are thrown in now and again thanks to the Unreal Engine 4 and the PopcornFX  software but it’s no Resogun, and again, it’s a been a few years since that game set the standard for the genre.  If you’re not going to try to raise the bar, surely you should try to at least learn a few tricks from what has come before. 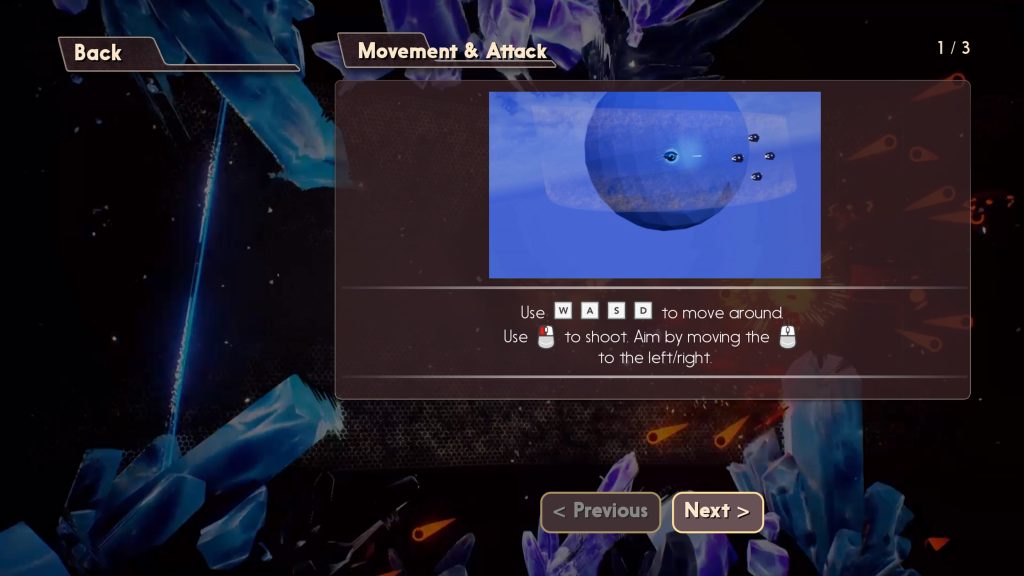 Aside from that, Boiling Bolt is also particularly poorly executed on a technical level.  The game’s menu sometimes stops working.  Like actually stops working.  I first noticed it when I was unable to buy things in the shop and then tried to start a new game and it simply wouldn’t let me until I closed the game down entirely.  The fact that the game’s ‘How To Play’ menu option also rather unhelpfully tried to tell me to use the WASD keys to move my ship.  Yep, this is the very laziest of PC ports.  Oh, and the online leaderboards don’t actually show my place on them.  Or the fact that one of the trophies is called ‘Just the beggining’ and another has the description ‘to several is better.’

It’s all just a bit of a mess and even if it wasn’t, even if it was technically solid there’s just nothing here to get excited about.  Shoot ’em ups should be dramatic, beautiful, fun and exciting but Boiling Bolt is just sub-par on pretty much every level.