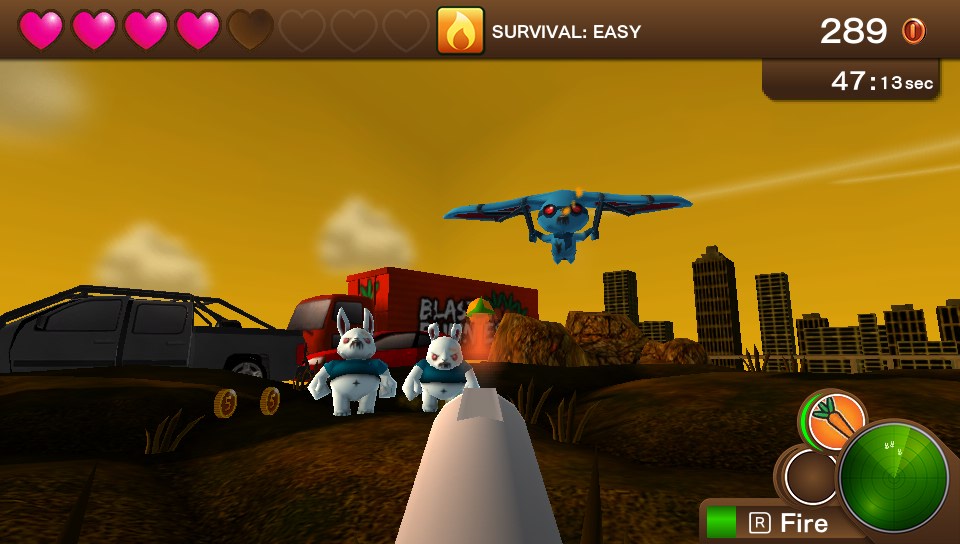 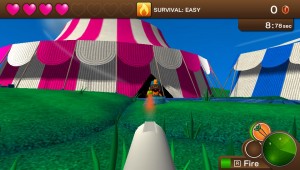 Blast ‘Em Bunnies is a game based round one simple idea, shooting bunnies.  Don’t panic it’s not a real gun you use, but some kind of marvellous creation capable of shooting carrots (the default ammo), pea lasers, pumpkins or seeds.  You see this is no normal shooting gallery.

You control a bunny, who despite the genocide he’s committing, is oddly happy.  Sat in a turret you are fixed to the spot, but able to rotate the full 360 degrees in order to eliminate your bunny enemies.  And what bunny enemies they are, you’ve fast and small ones, slow and fat ones, ones which use shields and absorb more damage, ones which fly.  The whole gamut of clichéd enemy types are on display in here.  You’ve got to dispatch these bunnies before they reach you, and often things can get a little frantic as you try to manage which bunny to take out first.

Gameplay is decent enough, and it’s hard to criticise the game in this regard as it does so little.  Each go generally only lasts a couple of minutes, after which you’re rewarded with points based on how you’ve done.  It’s just that there is so little on offer here.  Once you’ve seen your way past the tutorial you’ve basically seen all the game has to offer.

There isn’t much in the way of progression on offer, and you are mainly just working your way through the game to gain coins to unlock upgrades.  The main thing though is the level you’ll need to grind here.  Destroying a bunny will reward you with a handful of coins, and to unlock most things you’re looking at obtaining thousands of coins.  You’ll have arbitrary challenges to complete, such as destroy X amount of a certain kind of bunny, which will reward you with a large bounty of coins. But mainly it’ll just be a long slog to get the next upgrade.

It wouldn’t be too bad if the upgrades were worth the grind, but it feels like the only reason to upgrade is because it’s there.  There are other weapons to unlock, and additional hearts, but these just feel unfairly priced for quite so much grind.

Coupled to this grindy upgrade path is the abundance of items available to purchase in PSN Store.  Yeah it’s an in app purchase kind of game.  However they don’t actually change the content in the game, all that happens is a reskin of the existing enemy types.  You’ll still recognise the slow fat ones, or the small fast ones it’s just this time they’ll be in hilarious zombie skins.  The location skins are also literally just changes to the background picture, making no effect on the overall gameplay on offer.  It’s nice to see these new locations, but only to alleviate the monotony of the game, it doesn’t feel  worth the cost from the store.

It takes a ballsy developer to spin an entire game out of what could be considered a minigame from any other major release.  And this is exactly what Nnooo have done here.  There is little depth to this title and it really is as simple as spinning round in your turret to destroy bunnies.  A lack of depth isn’t necessarily a bad thing though, and it’s clear Blast ‘Em Bunnies is squarely aiming at the quick hit arcade style market where depth of content isn’t a key selling point.  This is the kind of game your child would play on your phone whilst your waiting for your meal to be served, this isn’t the kind of game you sit down to have a three hour session on a large screen. 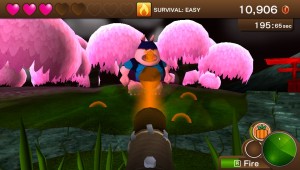 It’s dispiriting to see this released for the PS4,when it very much feels like a mobile phone game.  The VITA version is probably the best given the portable nature of the console and the lightweight feel of the game.  For £3.99 though this is pricing itself at the right level, what more do you expect for less than a fiver?  The gameplay is ok, the presentation is ok, the idea is ok.  In fact the whole game is ok, and I suppose that’s the most damming criticism I can give.

Blast 'Em Bunnies
5 Overall
Pros
+ The game is presented to a good standard + Well priced for what it offers + Some fun to be had from blasting the bunnies
Cons
- This is not going to push your PS4 in anyway - Gets repetitive quickly - The rewards on offer don’t justify the grind needed - Potential in app purchase hell
Summary
This is a forgettable turret shooter which gets repetitive quickly. Clearly in the free to play mould as it has in game purchases up the wazoo. What saves this from being totally forgettable is a generally decent level of presentation and a good price point.