Bassmaster Fishing 2022 then. Coming to us from Dovetail Games, dev and publisher of the Train Simulator games, this is a competitive fishing game writ large as only America knows how. The back of a fag packet scribble for this is NASCAR and Sega Bass Fishing made a baby. Even down to the TV coverage and jumpsuits with sponsors splashed all over them.

The real-life Bassmaster promotion is run by B.A.S.S. LLC, that rather cumbersome backronym standing for Bass Anglers Sportsman Society. From what we can tell, the game loosely follows the qualifying format of the actual series, the celebrity endorsement being a bloke called Scott Martin. He’s not actually won the series yet, but his dad won it nineteen times, so yer man Scott “has his sights set firmly on fulfilling his family legacy”. Scott, apparently, has had a fair bit of input into the game too, though quite what aspects we’re not sure. 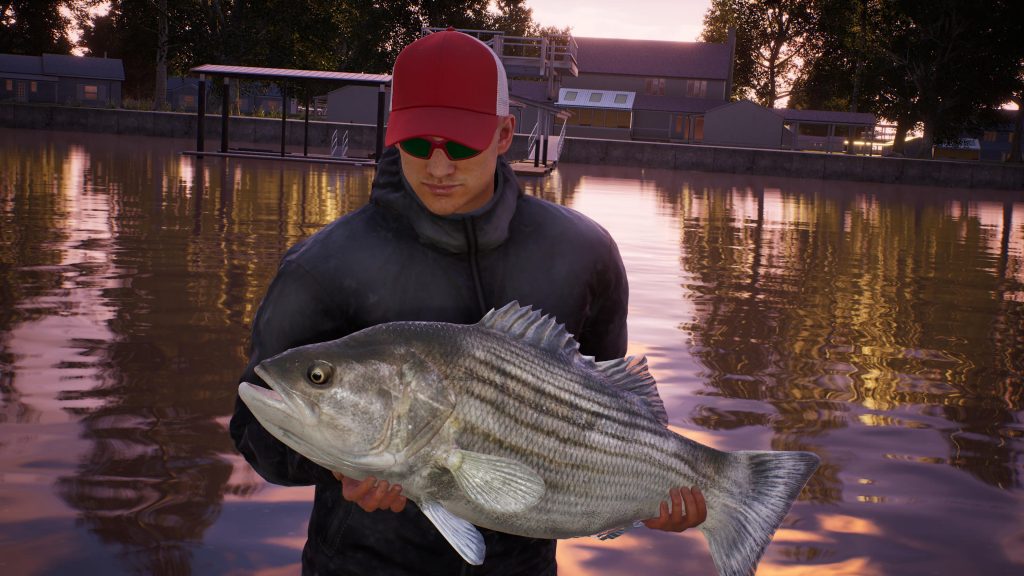 Practically you have a powerboat that’s also your fishing platform to cast from. You can choose from a number of preset rod and tackle loadouts to suit a particular situation, though we found that an offshore setup did the trick pretty well in most situations. You only really need to get into specific loadouts for particular fish, though we wondered why blue catfish proved so elusive. It turned out they were impossible to catch until a post-release patch. That’d be it.

One thing we noticed compared to other fishing games we’ve put plenty of hours into, your camera angle underwater is strictly fixed off to an oblique angle. Not to mention the fact that the fish radar mechanic is barely explained in the tutorial. We guess it’s sorta showing the general area, but the specifics aren’t explained at all. We’d like a glossary that helps with stuff like this as it’s not the only thing that the game lets you get on with without nothing more than a perfunctory mention. 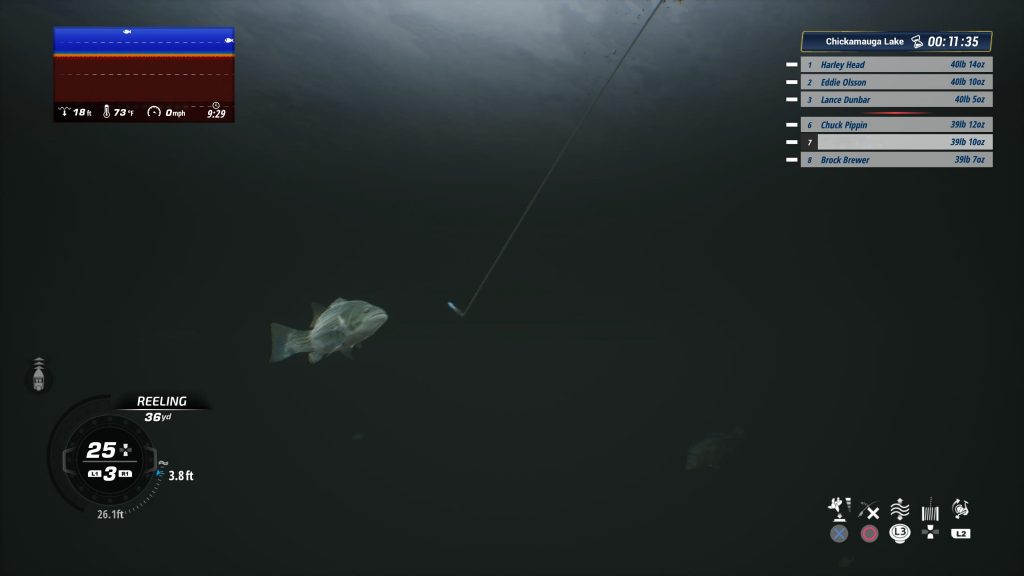 Fishing is generally solid throughout with two casting methods, easy or a bit more technical. The game doesn’t insist on either, so we went with the slightly more straightforward

casting option. The idea is you get on your boat and head into the waterway you’re fishing on, find fish via the radar and move on. What we found actually happened was we found a sweet spot and sat there for a half hour fishing.

This is all well and good when you’re catching all fish species for counts and cumulative length, but once you get to the matches where the species types are limited to specific bass types, you’re going to be in trouble. The bass aspect comes into play, typically limited to largemouth, smallmouth and spotted bass. Pull out a striped or white bass and you’re out of luck just like in the real tournament. They don’t even add up to your count of overall bass caught either, somewhat infuriatingly. This is especially annoying given the trophy for catching a thousand bass(!). 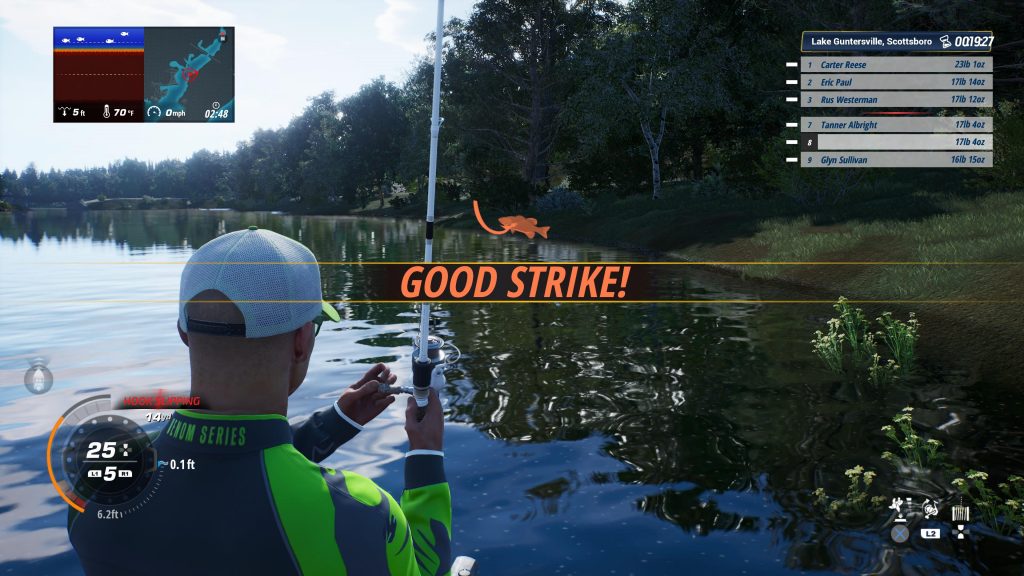 It’s more galling when you have a large cluster of fish and every bloody fish but the one you’re after is biting at your bait. The unfortunately named black and white crappies are rather appropriately named. At least each location has a trophy for catching all the fish species there as well as getting 250 total caught fish.

Additionally there’s legendary fish that appear to trigger randomly in each location. They’re always the one fish variety and they have a distinct name. We can understand a voracious predator having a nickname and being known among fishermen, but it’s a bit odd pulling out a bass with the same name as someone’s cousin. We get it, ‘Murica. But still. 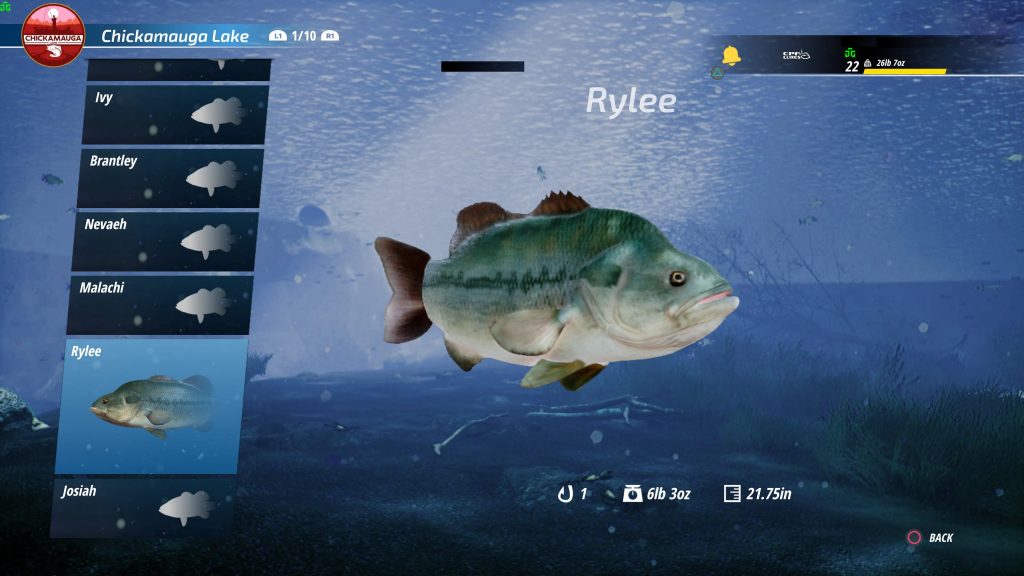 Talking of America, you can pick several sponsors. Your performance in matches gets you a better rating up to five stars on each. Though for reasons we can’t entirely ascertain, the ratings on your sponsors seem erratic. We’re not sure if your scores decay over time, but it isn’t clear even if they do. You’re supposedly able to get a hundred percent discount on their gear but despite having it on one sponsor, we found ourselves unable to fully take advantage.

Largely due to the fact that you can’t jump straight to their gear and fill your boots. You have to go into select loadout and create a new rod, hoping that the supplier is among the various rods, lures and reels etc. It’s a frustrating experience. Think an off-the-shelf SAP ERP implementation without zero customisations configured. Streamlined it ain’t. 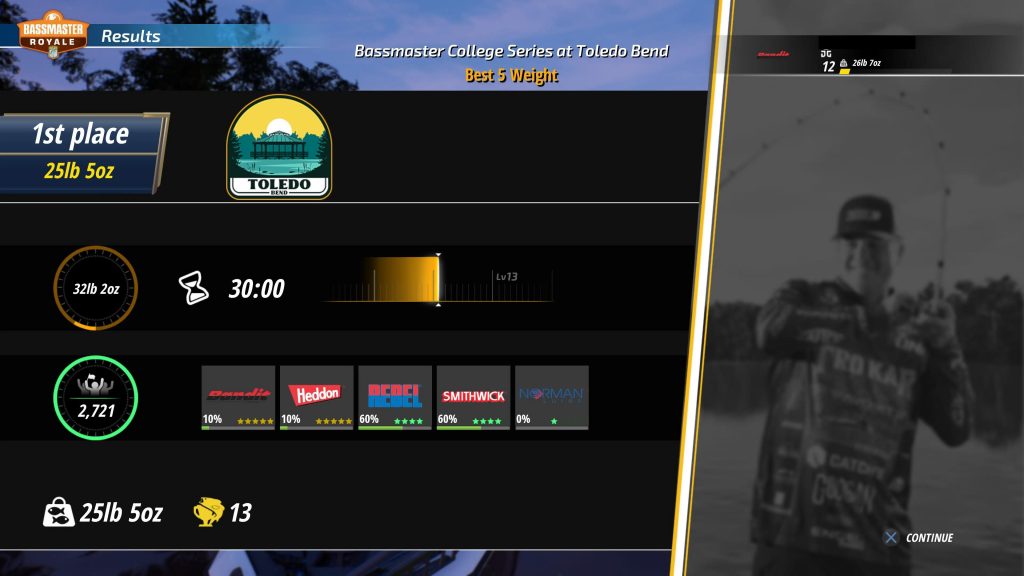 You can practice in each venue, but in career mode the matches are a half hour minimum. In real time too. We’ve found ourselves using the suspend function on our PS5 far more than we have since we bought it. Especially when we played two part tournaments that you can’t resume after one round has completed. No, we don’t get that either. This just means you play for ages longer than you necessarily mean to. Getting on for thirty hours and counting here.

Regarding the matches, you’ll unlock the next one in sequence even if you don’t actually catch a single fish.  As we’re typing up this paragraph we’re in a species count match and we’ve literally not caught one fish. After having written this we caught one fish in the dying seconds of the round. One. Damn. Fish. Given we beat the previous tournament with a dominant performance, we can’t help but wonder whether Bassmaster Fishing 2022 is buggy or born this way. At any rate, it’s as much fun as a turgid visual novel about feelings. 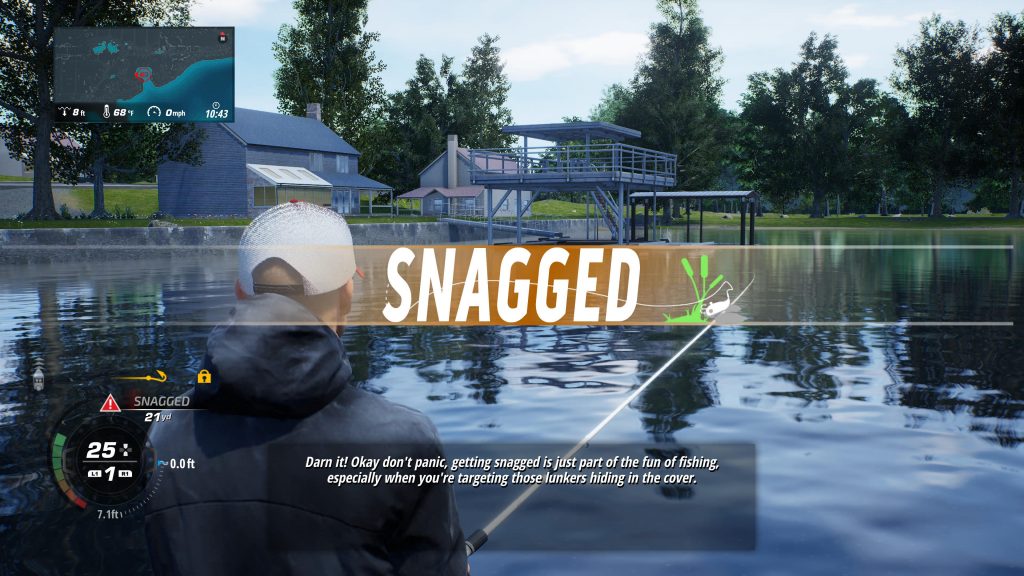 This is especially maddening when your fish radar shows loads in your vicinity but in the underwater view you’re just looking at murky depths. It feels like the game is fucking with you sometimes. Moreso when you’re reeling in and your line gets snagged on weeds.

Most annoyingly, for a game so obsessed with stats, the stats tracking is generally pretty poor. While there’s a PS5 version, Bassmaster Fishing 2022 makes zero use of the tracking available on PS5 trophies. Instead you have to check the menus in-game and even then they’re lacking in granular detail unless you go into the species list and add them up manually or start a spreadsheet. We’re seriously considering doing the latter to keep track, as BF2022 sure as hell isn’t helping in that regard. 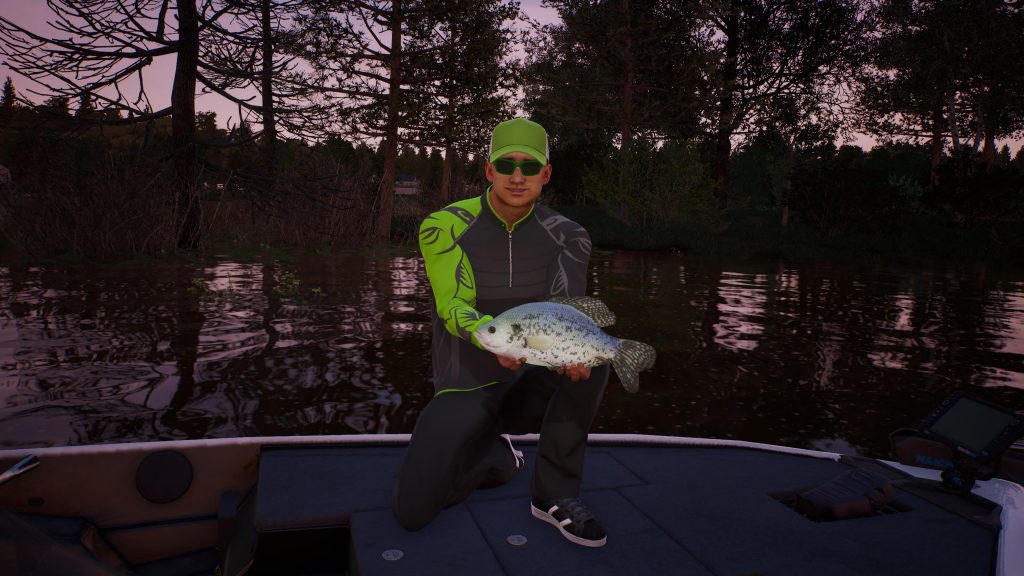 While you’re in a match you’ll have a handy summary of what you’ve caught, but when you return to the career menus the fish caught hasn’t updated at all since the first fifty. And we’re on more than five hundred caught fish. We thought that succumbing to the incessant nagging to log-in to Dovetail Live would yield more stats as promised, but no, upon viewing the website on a PC you just get marketing bumph and precious little integration. You get master challenges, but these too are glitchy. Not a great look.

One bright side, the twangy guitar music you have in the menu screens is blissfully absent during gameplay. That said, you could do with putting a CD on or using Spotify to listen to music yourself, we found Mall Grab & Ross From Friends fit the mood perfectly in that regard. Maybe 6Music on DAB.

In conclusion then, Bassmaster Fishing 2022 is a solid enough fishing game but the haphazard stat tracking and zero use of PS5 trophy tracking is a maddening omission. This is the perfect game to play during a boring Teams meeting as you’re hardly going to get too excited and give the game away that you’re playing.  Not being able to pause a tournament halfway through can make sessions a drawn out affair, moreso if fish aren’t biting. If you’ll excuse us, we’ve a spreadsheet to set up.

Cons
- Fixed camera underwater and inconsistency between fish radar and what you see
- Stat tracking is somewhat lacking in terms of how it's spread across multiple menus
- Many mechanics are barely described, if at all
- Multi-part tournaments can't be paused while in progress
Summary
Bassmaster Fishing 2022 is a glimpse into the pro bass fishing world. Slightly shonky implementation and other issues mar the experience a little bit but it's a solid fishing game otherwise. We can't stop playing despite that.