Every so often an indie game comes along which happens to be utterly fantastic, we wish we could report that Balancelot was one of them. Unfortunately the latest from Ratalaika isn’t even close to good.

The title Balancelot is a great little pun, given the setting. The tagline is ‘medieval jousting unicycle physics action’. Jousting fits as does physics. But the unicycle breaks this. Forget the anachronism, never mind how jarring it is. There’s a reason why a unicycle isn’t seen as a practical mode of transport. You see you fall off too easily. This applies in Balancealot too. 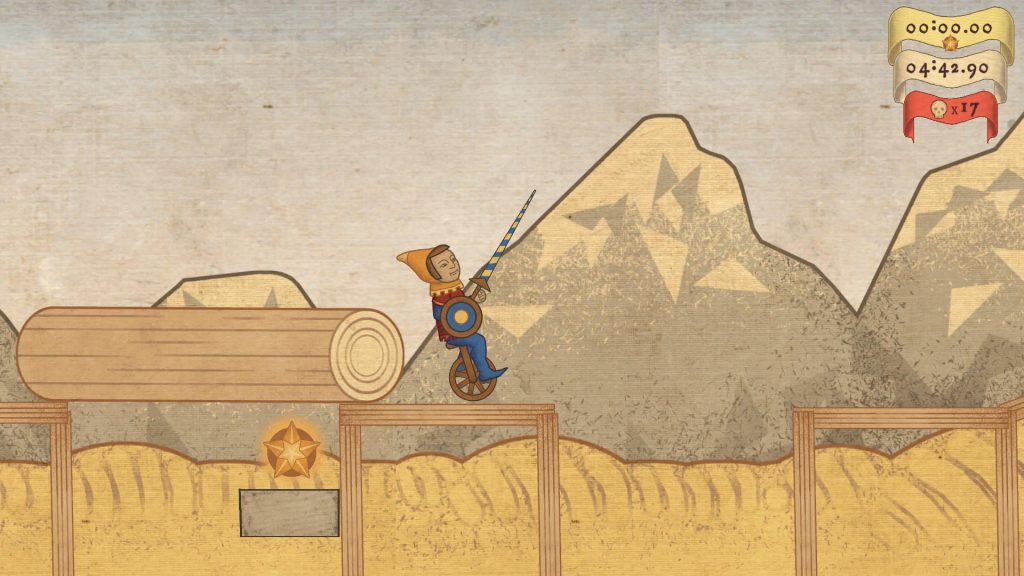 Things start out promisingly enough with a dryly amusing parable set in the kingom of Fopdoodle. No, that’s not Jacob Rees-Mogg’s ancestral seat, but you’d be forgiven for thinking so. Lance is a lowly squire with ambitions to become a knight himself and one day he decides to branch out on his own.

This is where you take control and you’ll do well to not fall flat on your face. And fall you will. You pedal back with

while keeping balance with the left thumbstick. That’s pretty much it regards traversal besides jumping with 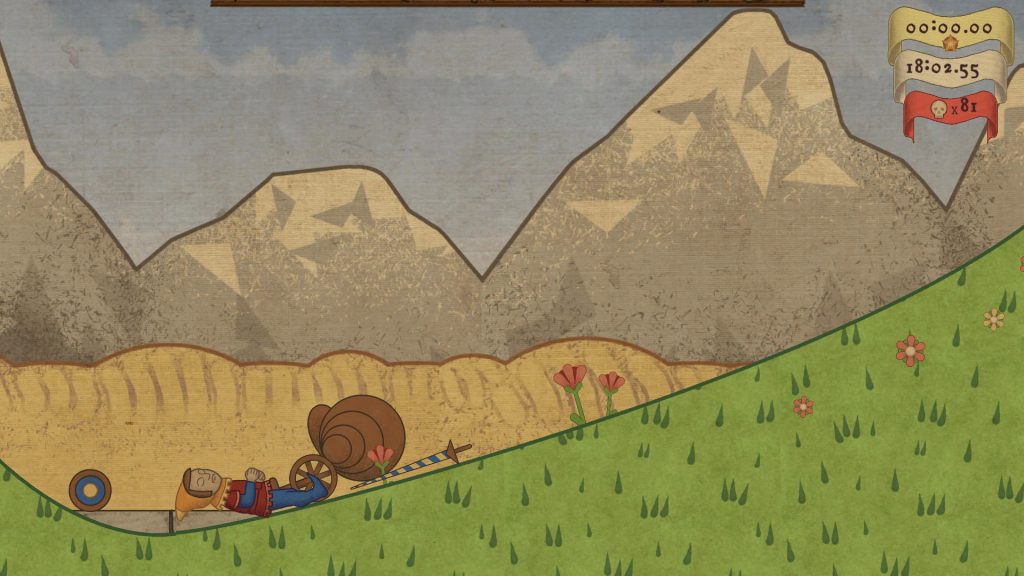 The problem is the fact that you’ll end up on your back more often than not. Perhaps the arrow keys worked well as a control method on the original PC version, but it doesn’t map at all well to the PS4.

This being a Ratalaika joint, there’s even a trophy for falling flat. Then another for ten stumbles as they’re penned. One more for twenty stumbles while you’re at it. Combined with checkpoints and snails you can dispatch with your lance (

), you’ll probably have unlocked all but one of the trophies on offer here by the end of the tutorial level. 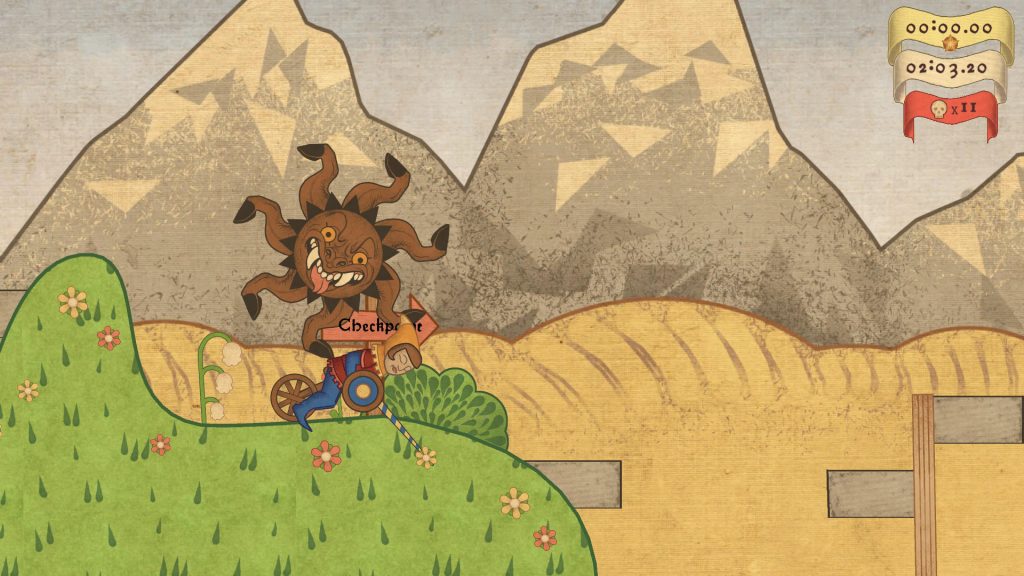 It’s only the fact that the final trophy requires you to dispatch a second type of enemy other than poor defenceless snails that will keep most people playing. Try as we might the continuing frustration we’d built up from countless deaths on the prior level was enough for us to write off any further progress after the fourth level. We say countless, but it was getting on for a hundred easily.

We had  every intention of carrying on, but the spectacularly unrewarding gameplay loop was enough to call it a day. The levels themselves aren’t so much the problem, it’s the controls and the fact you’ll be restarting over and over again. Though getting your lance caught on scenery and falling either to your death or backwards is a possibility.

Absurdly there’s even a hardcore mode that makes things even harder. We were unable to ascertain whether the controls were any twitchier but we did notice that each level has a time limit. Level one AKA the tutorial for example, has a time limit of three minutes twenty seconds. We finished it on our playthrough with a time in excess of twenty minutes. So the only hardcore we want is from New York thanks. Balancelot made us Sick Of It All, put it that way. 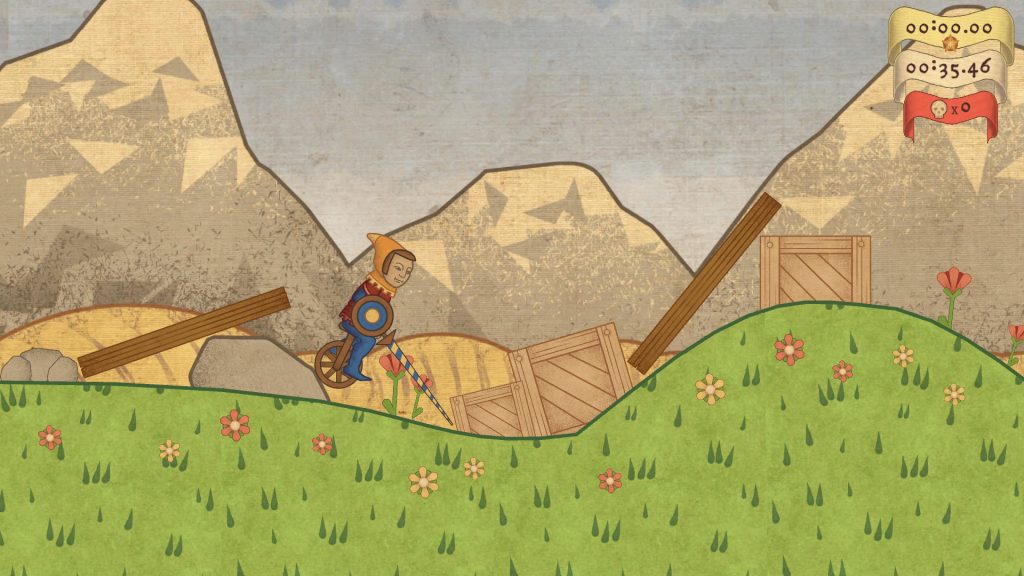 Graphically, this isn’t much to look at. Nor is it awash with sonic flourishes and embellishments. The spot effects are rudimentary and the music begins to grate very quickly.

In conclusion, Balancelot might’ve worked fine on PC but it’s a bad fit for consoles. There’s a bit more to it than Loot Hero DX, but that isn’t saying much. Unforgiving controls and insipid design make this one to swerve, easyish platinum trophy or not. Even if a PS5 port unlocks eventually, we don’t think we’ll bother thanks. Once is enough.

Cons
- Controls are a bad fit for console
- Bland uninspired graphics
- Music gets old quickly
Summary
Balancelot is a great pun but doesn't amount to much otherwise. Sure it's an easy enough platinum but it's very little fun to play due to the controls being a mess on PS4. Switch off your TV set and do something less boring instead.

One thought on “Balancelot – PS4 Review”