Atomine from Broken Arms Games is a twin stick shooter.  Something that we’re quite used to seeing on PSN these days.  Especially as it also has procedurally generated levels with rogue-lite mechanics.  However, there is also a storyline of sorts,  which is about the real-life Stuxnet internet worm.  This is largely irrelevant but adds a little colour to the overall experience.

In keeping with the Stuxnet schtick, you control a virus trying to bring down industrial computer systems of increasing complexity with enemies that initially won’t put up much of a fight to begin with. The challenge soon ramps up though. 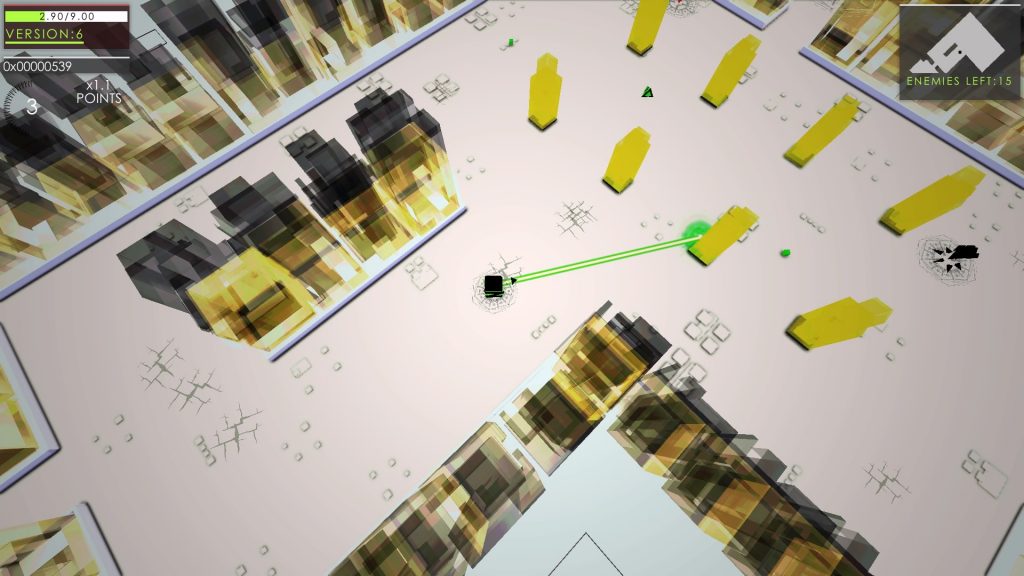 As you’ll play you’ll unlock ‘cryptocurrency’ which equates to tokens that unlock extra power ups and extra weapon types. You’ll grow more powerful with successive playthroughs as per the usual rogue-lite way of doing things. Initially you’ll have a basic cannon that fires a single shot, but as you progress you’ll unlock the likes of three way cannons or laser beams. Either way, you’ll soon find you make short work of previously challenging enemies.

What will immediately strike you is how spartan the graphics are.  We’re not talking about Master Chief either. They’re initially very plain and dare we say boring. We guess it is to reflect the fact you’re infiltrating industrial control systems, but it makes for pretty austere viewing to begin with.

Thankfully things do improve the further you progress, but you’ll still find the only colour in earlier levels is that of your laser beam and occasional enemies that come in something other than monochrome shades. Rez proved that you can have a hacking game with beautiful graphics, so the argument for a minimalist design philosophy is a little flawed. Okay, we get it, you’re an indie developer so you don’t have the resources to go all out but plenty of indie games on PSN are beautiful and setting a game in a computer system gives you the license to go as wild as you like. 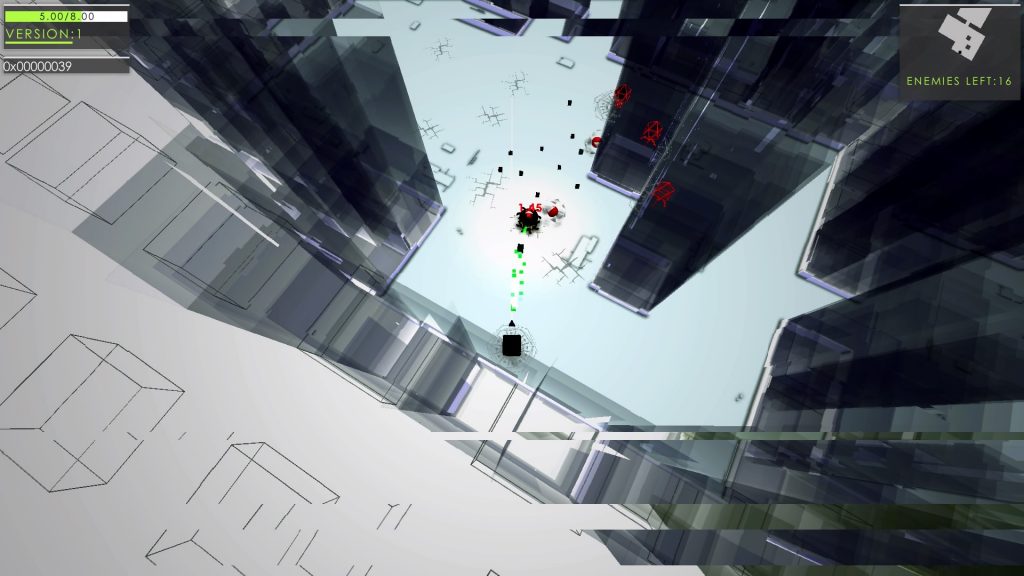 As you unlock more modules, fixed preset viruses with different loadouts will become available. For example, if you unlock all the required modules for virus version 1.2 you’ll get a nice trophy for your trouble and the ability to use that preset at the outset of an attempt. It’s an interesting mechanic and means you’ll potentially play with loadouts you’d possibly not otherwise use.

After every four levels you’ll come up a boss fight, the first of which ‘Hoenir’ is a simple enough proposition. To begin with your basic pew pew gun won’t cut it due to your limited firing range, so you’ll be well in range of the bosses rotating lasers and low health countermeasure cluster bombs. 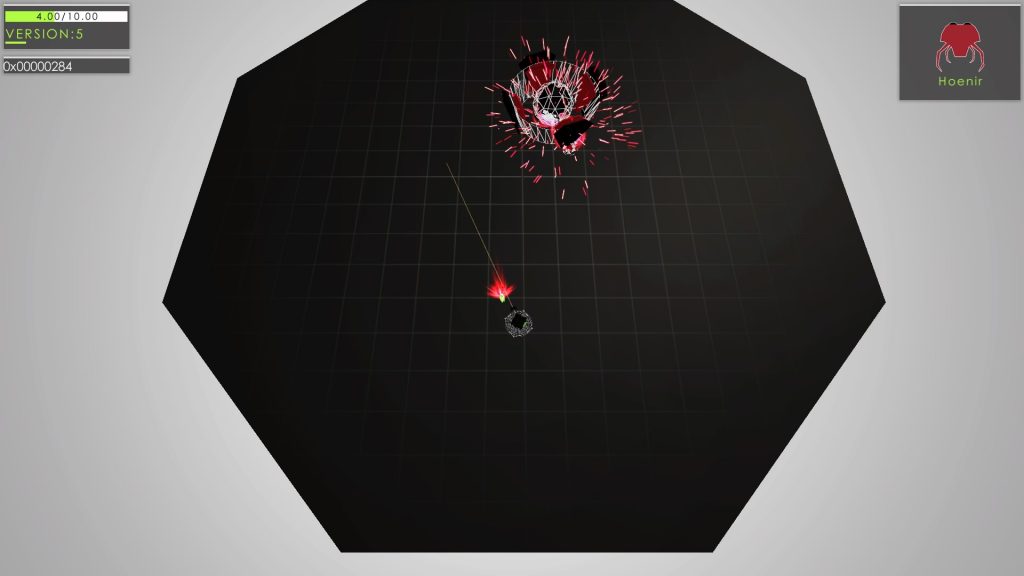 A powered up virus makes short work of Hoenir’s health bar eventually and you’ll be well equipped to tackle subsequent levels. At the time of writing we’d not progressed further than level seven but we can be sure there would have been another lurking after levels eight and twelve, with one more final boss at the very end of a successful run.

One thing we could do without is the forced perspective camera that often means the procedurally generated levels obscure your view.  It would be handy if you could rotate the view in order to get a better view of where you were headed and to see the system countermeasures that are looking to destroy you. 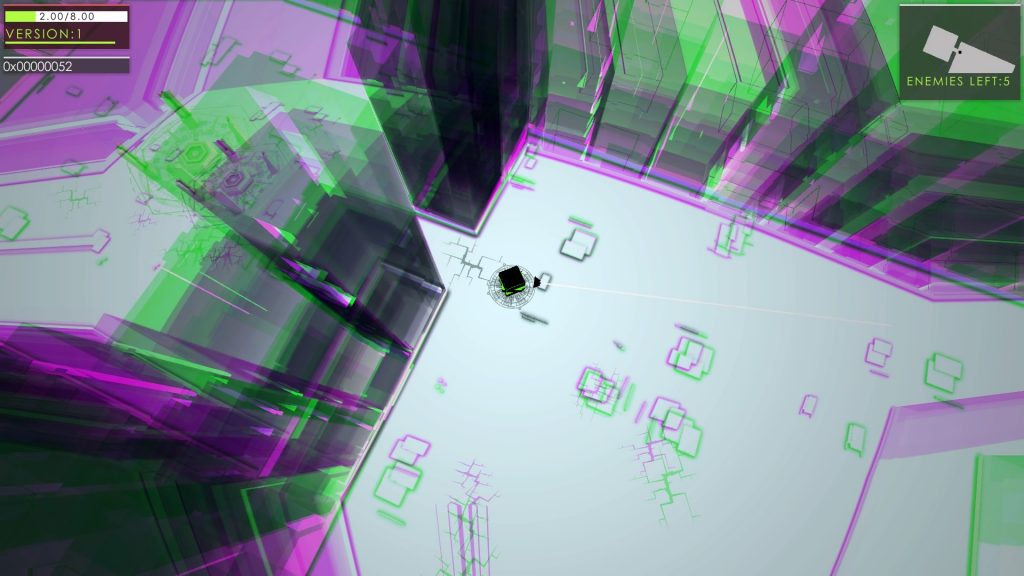 A tactic we often found ourselves using was popping our head into an adjacent chamber to kite enemies into a doorway and kill them as they come through, one by one. Funneling them in this manner means you’ll generally avoid barrages of fire from multiple enemies at least.  It works as a tactic but doesn’t make for the sort of exciting shoot ’em up action that makes a game stand out from the glut of PSN twin-stick shooters.

Annoyingly, our play experience was slightly marred by trophies that didn’t unlock despite our having fulfilled the unlock conditions (score 500 points in a run and beat level 5 being two culprits.) Hopefully a future patch will resolve this issue, but it did detract from our enjoyment a little.

In addition, we found the music and sound effects a bit on the loud side, annoying even. So we played with the master volume level at 20% at most.

Overall though, this is a mechanically sound addition to the many twin stick shooters available on PS4, only slightly hamstrung by the functional minimalist design philosophy and camera issues.

Cons
- Functional at best minimalist graphical style, almost boring in the opening levels
- Glitched trophies
- Fixed camera angles don't always help, especially when you're travelling downwards
- Music and sound effects are forgettable at best and annoying at worst
Summary
A fair attempt at a twin stick shooter that could do with a few more flourishes. Less isn't always more.