2016’s Aragami was a third-person stealth action game that was reasonably well received and caught our interest because it looked like the Tenchu game we’ve always wanted on the PS4.  It told the story of Aragami, the titular supernatural assassin who used darkness to navigate the game’s world and to take out the Kaiho, an army of warriors who use the light.  They had captured a girl called Yamiko who had used her powers to summon you so that you could rescue her.

The game offered thirteen levels to stealth kill your way through and initially it all seemed to capture that spirit of Tenchu reasonably well.  You skulked around in the shadows figuring out which guards to kill in which order so that your naughty deeds weren’t observed and you unlocked various new abilities along the way that could help you.  The setting of Feudal Japan was well-realised too, the game using a similar cartoonish look to that of the Borderlands games to represent its action. 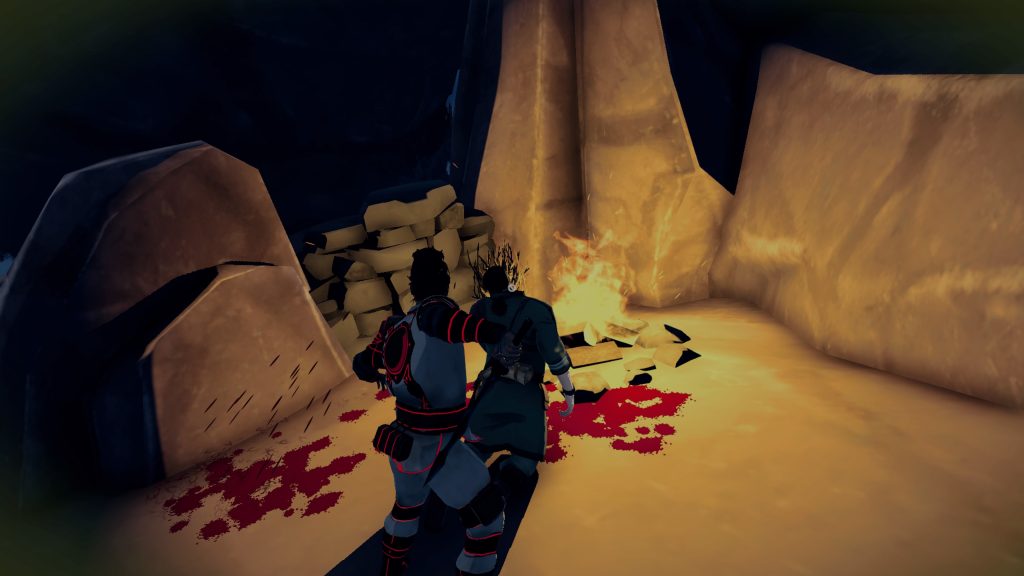 While Aragami was a good game and one that we can recommend to stealth fans, it had a few issues.  It felt clunky at times, especially for a ninja stealth game.  You can’t jump in the game but you can shadow leap by pointing at a surface and warping to it.  That works well enough but we’ve been spoiled over the years by games like Assassin’s Creed that let you freely navigate the world you are in so being crouched down trying to figure which few pixels you can actually warp onto was annoying.  Especially when you have to use your ability to create shadows that you can leap onto.  I remember one bit with a fucking boat that made me what to kill myself as I struggled to figure out exactly what the game wanted me to do.

The main problem though was the level design.  The early stages felt linear and satisfying to get through but after a while the levels got too big, too complex and ended up being frustrating.  It’s one thing figuring out how not to get seen by multiple enemies all looking at each other but that gets worse when you don’t even know where you’re meant to be going.  Sure, you’ve got an eagle pal who tells you but he just points at things you can’t do anything with such as light barriers rather than giving you a clue as to which barrier you should go to or where that barrier’s power source is.  You’ll figure it out in the end but we’re lazy and like our games to give us the head’s up about these things sometimes. 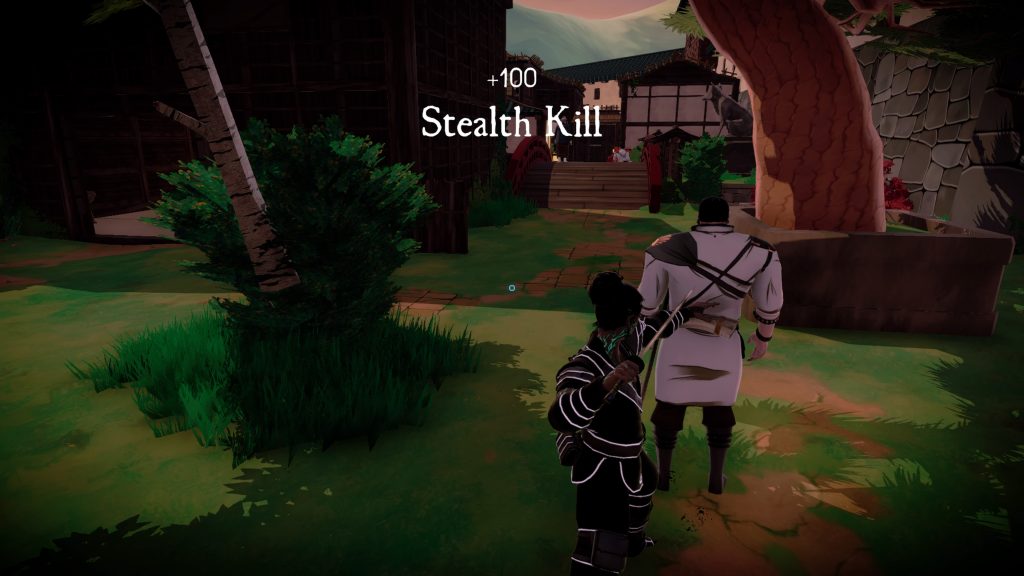 Anyway, overall the game’s okay and fans of it will be pleased to see Nightfall, the first DLC for the game coming a year and a half after the initial release.  It’s a substantial package that adds four new levels (and much like the main game these aren’t short) and acts as a prequel to the original story.  It features two playable protagonists, Hyo and Shinobu who echo the original Tenchu (you’ve got your older, stoic man ninja and the younger, headstrong female one).   You can pick either but also play in online co-op.

The DLC plays much like the original game except that you’ve got all your abilities unlocked right away, including some new ones.   Coming so long after the main game, the game does remind you of all of your moves and abilities but there’s no curve balls here to deal with.  This is just more of the same, for better or worse.

The game still offers a meaty challenge with trophies for no-kill/all-kill runs.  The level design isn’t quite as arduous as the original game’s layouts but they are still relatively large and open but we found it to be a bit more enjoyable, maybe because we thought ‘fuck it’ and decided to kill everyone this time, which is the best way to play it.  We still had moments where the way forward wasn’t exactly apparent and we still found ourselves looking for that collection of pixels we could warp to but not as frequently as before.

The stealth element is still important because even though you’re human now and not a shadowy wraith, the Kaiho’s light weapons will still take you out with ease and the enemy placements can be particularly tricky but that’s part of the fun.  Where Aragami shines is in the killing, all the searching and puzzle solving is just filler.  Unfortunately, Nightfall still gives that stuff a bit too much prominence but not to a game ruining degree and the enemies in the game are unrealistically stupid often forgetting about you/their murdered colleagues within a few seconds. 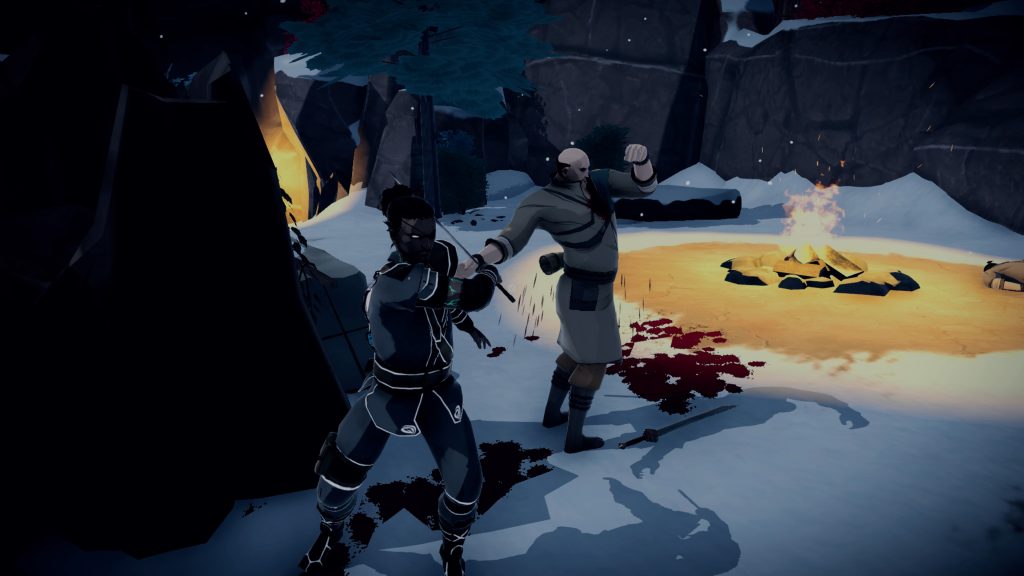 Another issue is the fairly ridiculous screen-tearing which is far more apparent than we remember seeing in Aragami.  Not good considering we’re on a PS4 Pro.  The graphics are reasonably nice from a design point of view but they shouldn’t be that taxing for a PS4 to render so we’re not sure what’s gone wrong there.  It’s as bad as Resident Evil 5 was on the last-gen consoles and that’s saying something.

So while Aragami: Nightfall isn’t quite the new Tenchu we hoped for, it’s as close as you’re going to get for now.   We’re hoping that any further content or sequels are a bit more polished and a bit more fun but we’re still on board with the game’s throat-slashing, disembowelling action.

Aragami: Nightfall
7 Overall
Pros
+ Solid stealth killing action
+ Groups of enemies provide a tactical challenge
+ You start this DLC fully powered-up
Cons
- Exploration can still be tedious
- Enemies are still very stupid
- Screen-tearing is an issue
Summary
Fans of the original Aragami will enjoy having four new levels to stalk their way through but the original game's issues are still present. So while the technical issues, clunky gameplay and overly long levels take away from the fun, Aragami still has plenty of moments where you feel like a badass ninja assassin and that's really the main thing we want from a game like this.