Small teams with big ambitions is a scenario that can play out any number of ways. Knuist & Perzik are primarily a Dutch duo who originally brought Wuppo to Steam last year, to critical success. Just over a year later, a version arrives for console owners to enjoy. As someone coming to this fresh, I’m eager to see how this translates to the Playstation 4 and whether the magic can remain strong. 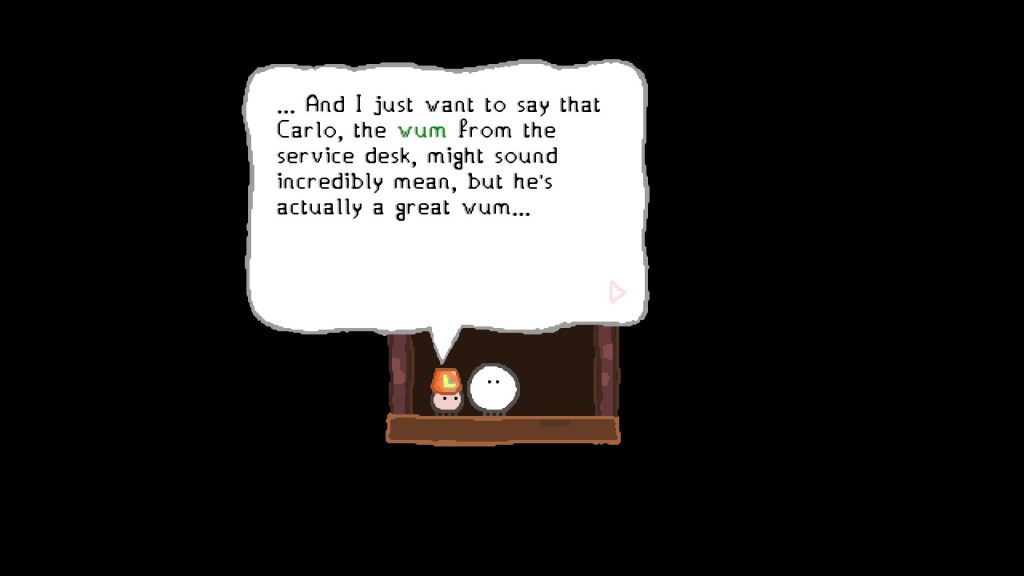 The story starts off simply. Wuppo is a Wum who finds himself out of home and deep into adventure. In search of a new abode, he takes something a world tour as he encounters the other major races. Each have their own characteristics and priorities. Some are docile and reflective whilst overs offer primitive motivations. Wuppo effectively rights wrongs in an attempt to find a new place to rest. Naturally, things escalate into something more global and life changing. To his credit, Wuppo takes things in his stride with some clever, charming dialogue. The other characters all have different goals and aspirations which our humble hero can help out with. It all carries a whimsy which helps make the world and it’s inhabitants so likeable.

Visuals really enforce this philosophy. It’s simple, colourful and, in the right moments, packs an appropriate level of detail. Popo City carries a relentless bustle whilst the forests near the Wumhouse are much more relaxed. There’s a definite variation to the scenery as you move from place to place. It builds to a final area that’s willing to show some effective flourishes. Friends and foes animate well and express their emotions tidily. Whilst I don’t find the music especially memorable, little touches like the chatter that accompanies dialogue raises a smile. Your weapons splash the world with colour with reckless abandon and you are constantly reminded how nobody in the world of Wuppo truly take themselves too seriously. 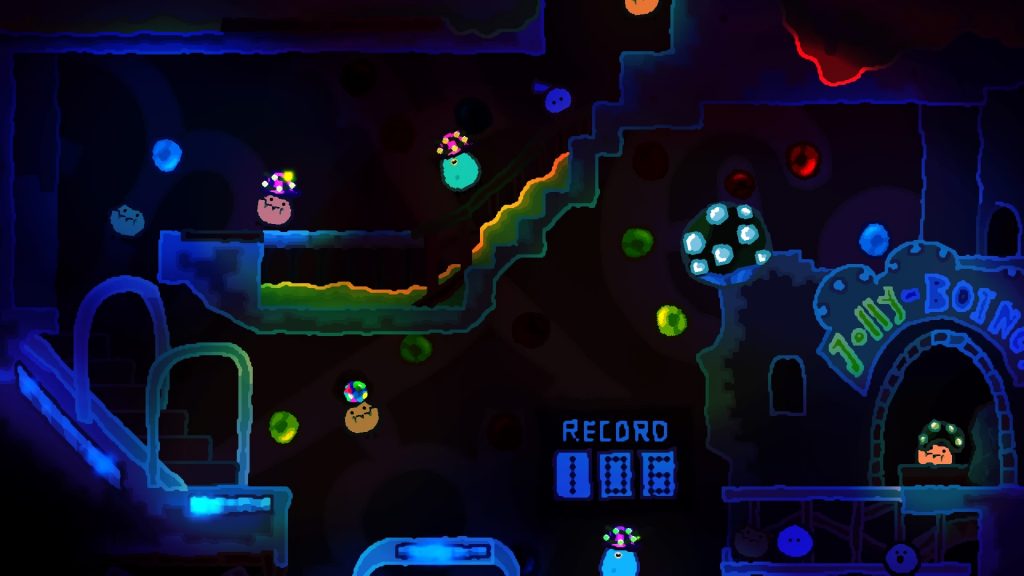 Gameplay picks and chooses from many different stalls. Platforming appears as the only constant with traversal being achieved through the usual single and double jumps and shortcuts can be discovered and new paths can be unlocked through use of the environment. Originally, I expected this to be another Metroid-esque labyrinth but I’ve realised there’s not usually a need to backtrack. It’s possible to return to older areas but not necessary. It helps provide a forward momentum although I did kinda ruin myself on my first playthrough. I’ll hand this tip out of free: Don’t discard anything in your inventory. Wuppo is more concerned with exploration and adventure and there are items that just might come in handy more than once.

Combat also takes a bow with some twin-stick shooting allowing you to take out standard enemies and bosses alike. Whilst this aspect starts to subside the more you progress, the bosses maintain an interesting challenge and contain some intriguing set-pieces. A couple of the bosses carry more weight than others and beating them can feel like a real accomplishment. There’s nineteen to uncover and some can be avoided entirely. They offer mostly monetary rewards but there’s also filmstrips to collect. These flesh out the four main races and some of the key players you encounter along your journey. It provides some substance and context to the people you meet which is a nice touch. You gain some new weaponry through sidequests and can buy upgrades, if you’re after a little more firepower. There’s some standard archetypes with the bazooka offering a heavy hit with some lengthy charge times but the colourful spray of each weapon will at least offer something visually appealing. 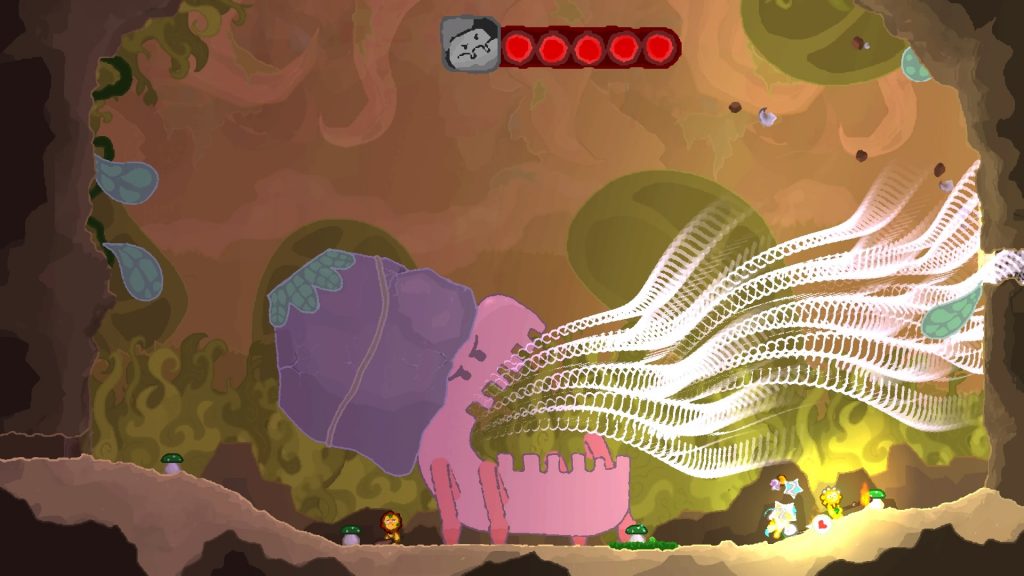 A lot of your time in Wuppo involves solving problems and puzzles to advance. There’s plenty of side-quests to occupy yourself with and the standard puzzles aren’t too obtuse to figure out. There’s one logic puzzle which stumped me and, it must be said that the game’s pace does drop in the middle chapter. You can gallop through the early stages pretty swiftly but there’s definite moments of downtime which can take the wind out of your sails. Save points do come and go quite often so you won’t be ruing lost progress too much. You’re looking at maybe a dozen hours worth of entertainment and, by then, you should be pretty robust at dealing and taking damage. Considering the size and scope of the world created, there’s a lot in here for you to peruse.

I do feel the drop in urgency around the middle does require some patience and the tougher, puzzling moments can lead to some frustration. The platforming on offer seems fairly forgiving so the fleeting instances that require actual precision can feel out of place.   Inventory management can be a little tricky.  You can use face and directional buttons as shortcuts but I never feel truly safe to spring clean and discard items.  Situations like this are rare but they can feel like potential roadblocks to an otherwise breezy experience. It doesn’t deter enough not to recommend this. It’s a well constructed, ambitious effort that combines together comprehensively.

Wuppo
8 Overall
Pros
+ Charming art style with moments of visual flair.
+ Smartly written with an interesting cast of characters.
+ Fun, accessible combat.
+ Spectacularly dense environments with plenty to explore.
Cons
- There's a lull in the middle which can test your patience.
- Your inventory can become cluttered and a little hard to manage.
- The soundtrack feels somewhat anonymous to me.
Summary
Small worries aside, Wuppo's character and style has managed to disarm me with some cheeky writing and a surprisingly dense world. The pace does bog down in two particular parts but I was intrigued enough to persevere. Combat is engaging and exploration is usually rewarding. This is a staggering effort from such a small team and their passion shows. This is very, very well crafted.