Windfolk catches the attention pretty quickly. Not many games give you the ability to fly at pace in a 3D environment and the visuals are simple but bright as you whizz past them. As the tutorial level teaches you how to fly it makes a good first impression and the excitement grows as to where your adventure will take you, but unfortunately it doesn’t go very far. 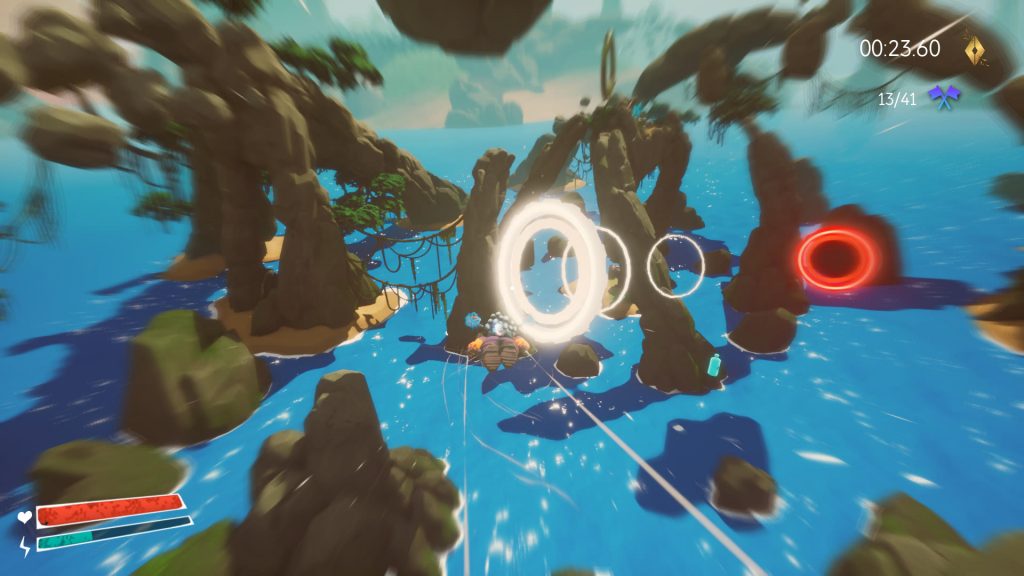 You play as Esen, a rebellious teen or maybe woman, it’s hard to tell, who fights with the religious Resistance against the Coalition, an Empire style army that’s using all the planet’s natural resources to take control. As I write that it does sound quite a bit like Star Wars, with the natural resource, trydian, possibly being more than just a lump of glowing ore and an ancient race of people, the Herders, that used the power of the trydian to become strong and fly without the aid of jetpacks.

As you’re playing it’s a little less noticeable as although there is a lot of it the story is only told through dialogue as you fly around, sometimes doing things and sometimes just waiting for the next checkpoint to appear. The dialogue is pretty poorly acted, with the lines rarely gelling together in a natural way but it does the job. There are only eight story stages so it is quite brief but it packs quite a lot in those levels, which can be annoying on repeat plays as you can’t skip the dialogue.

As mentioned in the first paragraph your main method of traversal is flying with a jetpack. You can turn it off and walk around but there’s never any real reason to do so. The controls are pretty intuitive and it’s in the flying where Windfolk‘s strength lies. You fly where your camera is pointed, with

boosting you and clicking or holding in the left stick giving you an even greater speed boost for a limited time. The first level gives you a pretty open area to fly around in. There’s not a lot going on and the story will point you to specific checkpoints to hit but it allows you to fly around to your heart’s content. 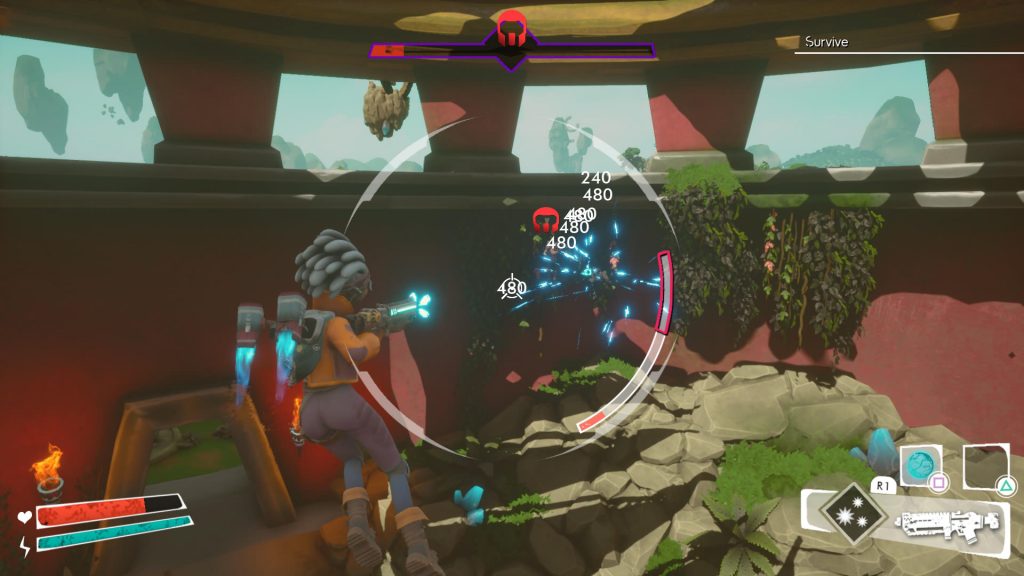 You’ll also be taught about combat. It’s pretty straight forward with a large reticule in the middle of screen letting you target anything within it just by holding

. There are three weapons that unlock as you progress through the game and each has a little gimmick to it. Your default is a machine gun which can overheat, but if you press

when it’s close to overheating then you fire a strong shot which cools it and you can continue firing. The second gun needs to be charged before firing, but if you fire again at the right time then it’ll charge faster and if you get a combo then you can again press

and fire off a shot that will bounce between enemies. The third lets you hold down the button to auto-fire rockets at enemies and when all the rockets are spent you can press

to fire an orb that will auto-attack enemies.

You also have some skills you can use on

. These are a short term shield, a warp that puts you behind an enemy and a magnet that sucks in enemies. You can also dodge with

. Unfortunately the combat is quite weak. First you can only really float around whilst fighting, you’re not going to be shooting at high speed or anything like that. Second the weapons feel quite weedy and the way they work slows things down even more. For example, I found the best gun to be the charge gun due to its strength, but if you dodge part way through a combo then you’re guaranteed to lose it, the game doesn’t let you combine the dodge and firing in a seamless way which would have made the combat feel more flowing rather than the slow, stilted affair it is.

There are a handful of enemy types and a couple of boss battles but most of the enemies just float in place, the only ones I had to worry about were the sniper type that would warn you with a targetting beam when they were going to shoot. The others would do minor damage at best and health pick ups drop fairly regularly. If you do die the game is quite generous with the checkpoints, though sometimes the music doesn’t start up again when you reload and I had times when the enemies wouldn’t attack at all, like their AI was broke. 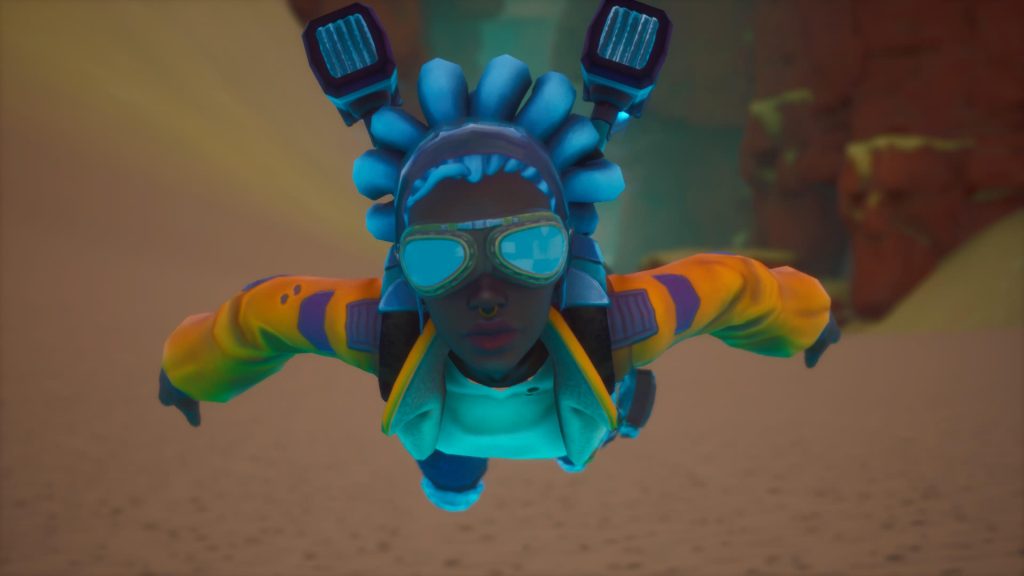 The game also makes the mistake of closing off the maps very quickly. That first level is lovely and open letting you spread your wings, as it were, but most of the levels have areas blocked off with a warning to return to the mission area. Giving you this enjoyable flight system and then constraining you is an odd design choice. There are a couple of times where you are given checkpoints to fly through, Superman 64 style, and these work well and you can fly at top speed weaving between objects. Basically when you’re allowed to fly around in Windfolk it’s a good time, but the rest is not.

As well as the story which only takes a few hours to beat, though there are hidden journal entries to find if you don’t get them first time, there is an Arcade mode. Here there are seven levels with targets to earn a bronze, silver or gold medal. There are a couple of combat arenas which task you with surviving a certain number of waves, five time trials which are the enjoyable checkpoint races where floating canisters will let you continue your maximum boost for longer and then there’s a drift challenge, but I’m not sure how that’s different to the time trials to be honest.

Again these won’t take you long to get through, getting the gold isn’t too difficult on most of them and the Platinum trophy comes pretty easily too since you can replay levels. All in all you’ll be done in under five hours but then for £12 that’s not too offensive. Some of the sloppy UI (Spanish language in certain areas) isn’t great however and makes the game feel unfinished, combined with some odd choices around exploration and combat makes this harder to recommend. 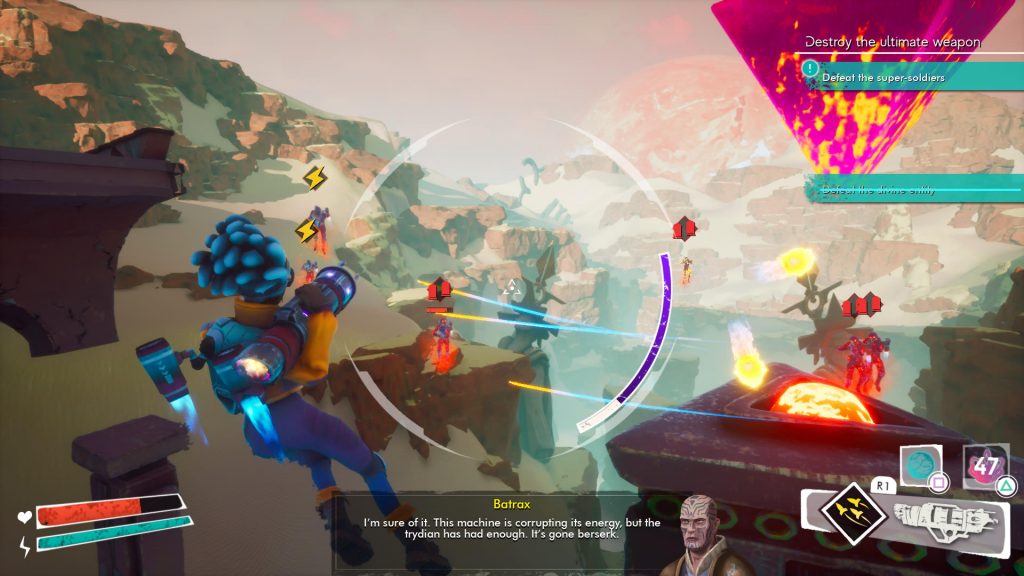 Windfolk has an enjoyable flying engine in place with some simple but attractive visuals, unfortunately rather than focus on the flying and build a game around that too often you’re put into a battle arena with weak combat or confined to limited areas to explore. That’s not to say it’s a bad game but after the introduction of the flying it fails to fulfil its potential, falling back to more common gameplay staples like combat rather than aiming too high. With a flying game the sky should be the limit, not an artificial barrier.

Windfolk
6 Overall
Pros
+ Flying at full speed controls well and feels great
+ Open levels are fun to explore
+ Colourful, if simple, visuals
+ Story mode and arcade mode
Cons
- Combat is slow and clumsy
- Too many levels restrict your movement
- Very short
- Some sloppy UI
Summary
Windfolk is a short but enjoyable time when you're flying through the air at speed but the game often slams the brakes on to force you into more confined areas or weak combat which doesn't take advantage of the flight mechanics at all.