From North Carolina-based two man developer Infuse Studio and publisher Merge comes Spirit of the North: Enhanced Edition. Originally released last year on PS4 and earlier this year on PC, from what we can tell, this is the original PS4 release with the higher res PC assets.

We didn’t review the original PS4 game so this version came to us with fresh eyes just in time for our having got a PS5. First impressions are great. Spirit of the North is a pretty game. Admittedly it’s helped by the fact that snow is beautiful at the outset. 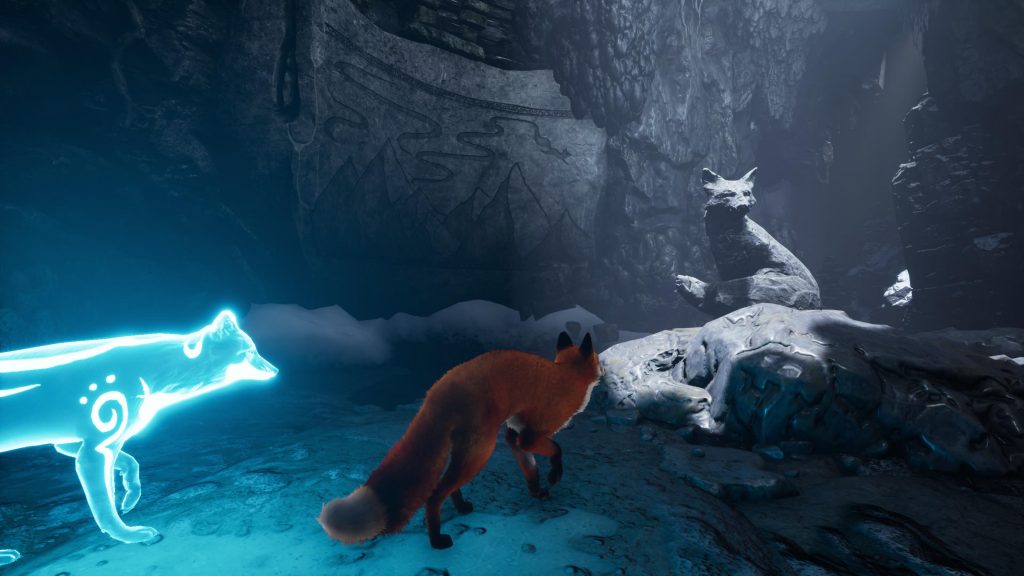 You’re a red fox which makes the contrast on white snow all the more stark. The context would make more sense if you were playing as an arctic fox, but then you’d be veering very close stylistically to the rather more plot driven Never Alone. So for that alone, we understand why you’re a more typical red fox.

After a while running around gloriously realised snowdrifts, you’ll realise that you’d best get on with the matter at hand. Though initially you’ll have little idea as to what you’re actually supposed to do. Eventually you’ll find your way into an icy catacomb and awaken the titular Spirit of the North. She’s a female spirit fox and uses her feminine wiles to seduce you. 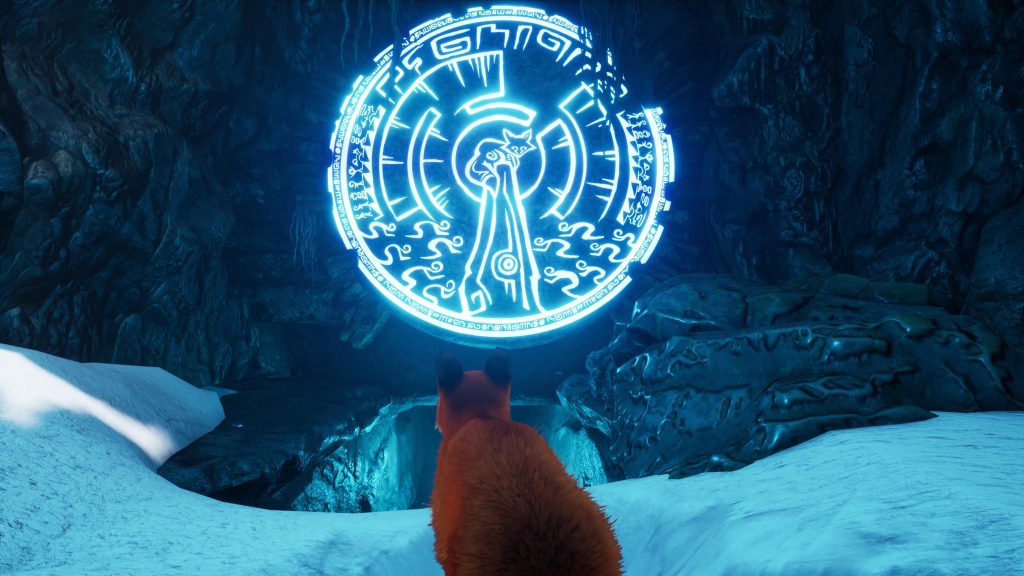 At least that’s the interpretation you can choose to take. You see, there’s zero dialogue or plot exposition here. Not so much as a text prompt. As a result, in the opening stages at least, Spirit of the North is very much a contemplative affair. That’s not a bad thing at all, as it would’ve been far too easy to make this yet another open world brawler where you fought off evil arctic hares or something. We don’t know.

For reasons, you end up infused with pure ancient energy. So says the trophy description anyway and that’s literally all the narrative we have to go on. Practically this means you can get spirit energy from blue glowing flowers and transfer it to standing stones and ancient murals. 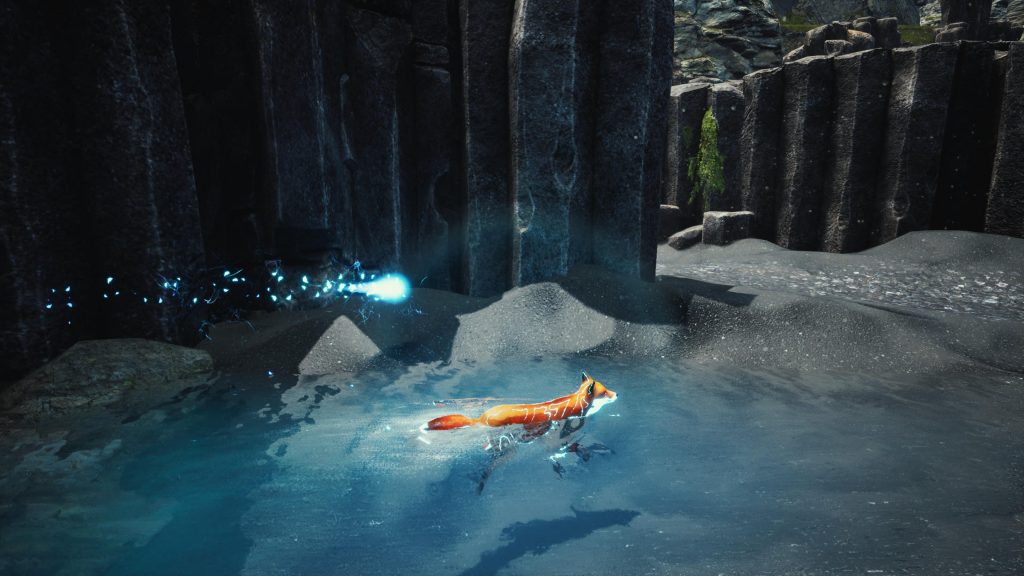 These have the effect of opening doors and raising water levels amongst other things. It all makes sense in context trust us. After a little while you’ll unlock Spirit Bark, which is just what it says. A spirit infused bark. It has the effect of destroying plague tethers which are the source of the pestilence that has turned out the northern lights. We think.

In fairly short order you’ll unlock Spirit Form yourself and in doing gain the ability to activate pressure pads with your corporeal form and send off your spirit to do your bidding, usually activating a standing stone just in the nick of time.

As well as finding your way to the ultimate source of the pestilence, you’ll awaken shaman spirits by finding wooden staffs and reuniting them with a nearby desiccated corpse. On occasion they’ll open up doors for you, but they’re just a collectible really. As you unlock them, you’ll gain the ability to select new skins for your fox. They serve no function besides looking pretty, but it’s nice to see different looks. 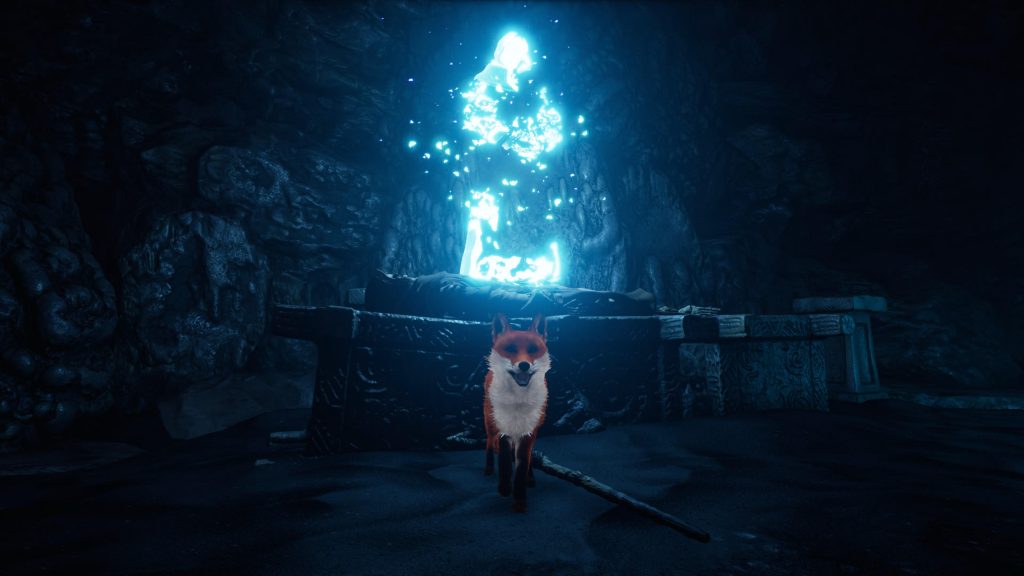 Handily each chapter shows whether you’ve missed any shamans on the level select screen, so it’s straightforward to mop up if you’re a completist and want to get your second platinum on your PS5. You’ve platted Astro’s Playroom right?

Your final ability and perhaps the most useful is Spirit Dash. In conjuction with jump gates you’ll find yourself flung across the landscape enroute to your ultimate destination. If you’re not collecting staffs for shamans, you might well be able to tear through all eight chapters on offer here in fairly short order. But we’d recommend you didn’t as until you get into the fourth chapter and the areas really affected  by the crimson pestilence, you’ll frequently find yourself enjoying the beautiful Icelandic vistas on offer here. 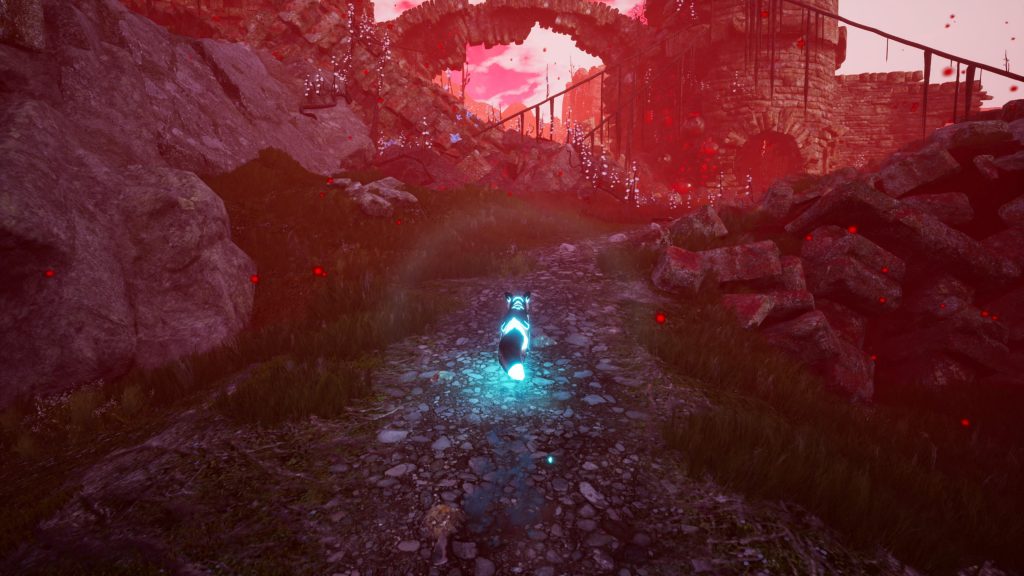 Even they are pretty enough, just tinged in red and for some reason making our Dualsense vibrate like mad. It may have been a glitch, we don’t know. But there was no let up until we got to the end of a chapter and we called it a night.

Regards the Dualsense, we don’t get the feeling that the game utilised even a fraction of the functions available in the API. We concede that this is a port of an existing game, so to retrofit the game with the speaker being used for example would be a big ask, especially for an indie dev with limited resources. You could play the whole of the game with a Dualshock 4, it’s only Sony’s requirement that PS5 games utilise the new controller that stops you doing so. 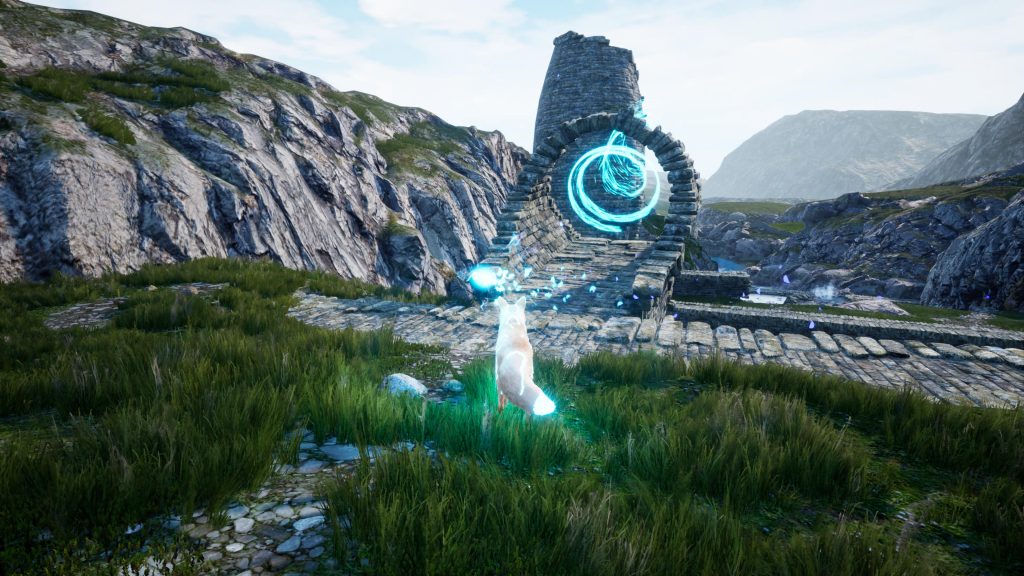 Along with the underused controller functions, our main gripe with SotN:EE was the seventh chapter. We get it advanced the story, but did it really have to be in caves so dark you couldn’t see a damn thing? Even a few sinister glowing skulls with red eyes would’ve helped a little. But it’s a minor blip.

The music from inhouse composer Joseph Gifford is very tranquil and fits the mood just right. It’s not too intrusive but is a nice thread throughout the game.

In conclusion, for a system still in its infancy, you could do far worse than Spirit of the North: Enhanced Edition.  Just don’t expect too much in the way of fancy bells and whistles ’cause you won’t get them here. Rather a very pretty puzzle platformer with vulpine protagonists.

Cons
- Plot is threadbare if non-existent
- Other than uprated visuals, not clear what makes this particularly a PS5 game. It doesn't use the Dualsense beyond what you'd expect from a DS4
- Chapter seven's cave setting is too dark
- Maybe we're being picky, but the red fox isn't native to Iceland
Summary
Spirit of the North: Enhanced Edition is a pretty puzzle platformer, perhaps not revolutionary but for an indie game it's a good debut on PS5 from Infuse Studio. We just wish it used the Dualsense functions at all as it feels like a missed opportunity.