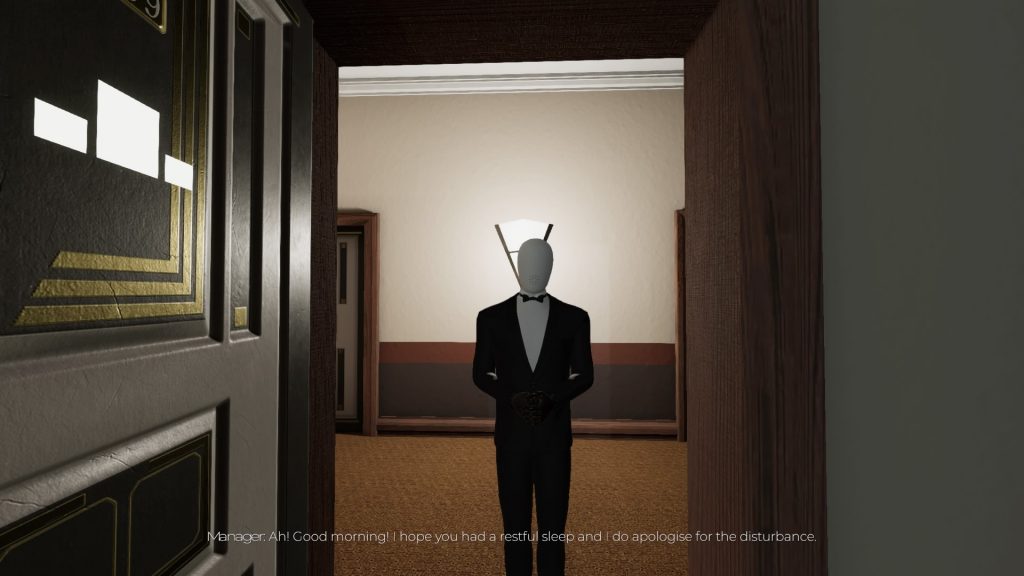 The Spectrum Retreat takes place within a robot-staffed hotel. You must solve an assortment of puzzles to solve the mystery of yourself, the location and to ultimately ascend through the hotel’s many floors. The story unfolds with environmental cues and you’re guided by Cooper, a voice on your phone who holds your hand through the hotel’s corridors. It begins with the right amount of intrigue as you’re trying to understand just who and where you are but it seems to unfold a little too quickly. You find clues early on that deal with your past and the big twist isn’t so much twisted as shown to you in advance. Cooper catches on well after the fact and, by then, there’s no real impact.

It doesn’t carry a punch and, truth be told, there’s not that much story to get through. You do get to understand some of the family dynamics and build-up to visiting the retreat but, it doesn’t really land as well as I’d like. There’s not a lot that isn’t shown to you, either. You have collectible logs which add more context to The Spectrum Retreat but they’re often in plain sight and you come across them naturally. 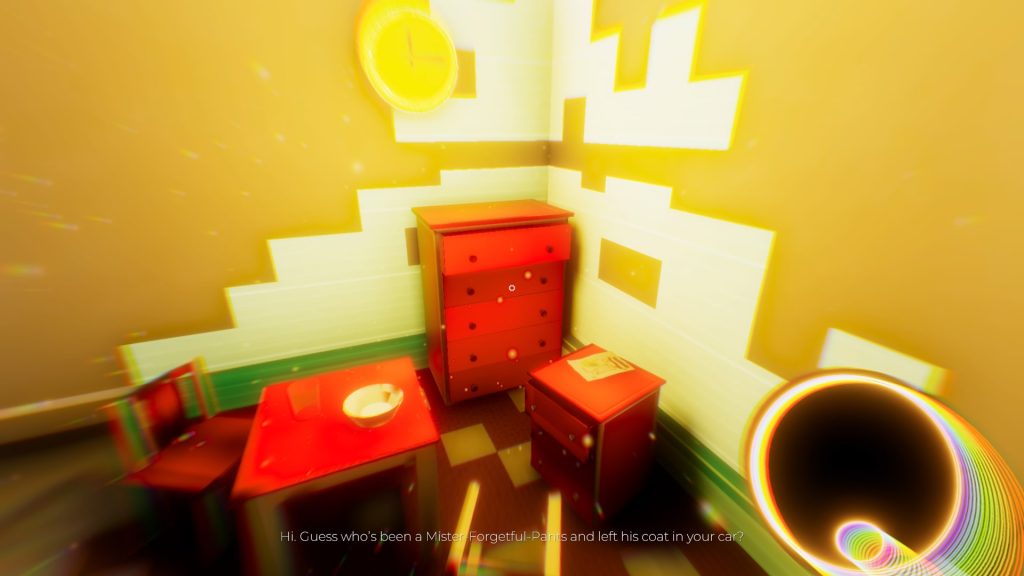 The game’s structure reminds me of Portal. Puzzles exist within laboratory conditions with a very clear distinction between the normality of the hotel and the sterile puzzle environments. Some of your characters memories bleed into the puzzles to drip-feed plot but, for the most part, you’re left in solicitude to solve. You’re eased into things gently as mechanics are slowly given to you. They increase in complexity before each floor culminates in a graduation test.

Everything revolves around colours and your phone can store one at a time. Consider your stored colour like a key that unlocks gateways of the same colour. Moving these colours around to access new parts of the test will ultimately lead to the exit. This can prove challenging without being too perplexing. Outside of tests, you’re tasked with inspecting the hotel grounds for key codes and further clues to the nature of the hotel. 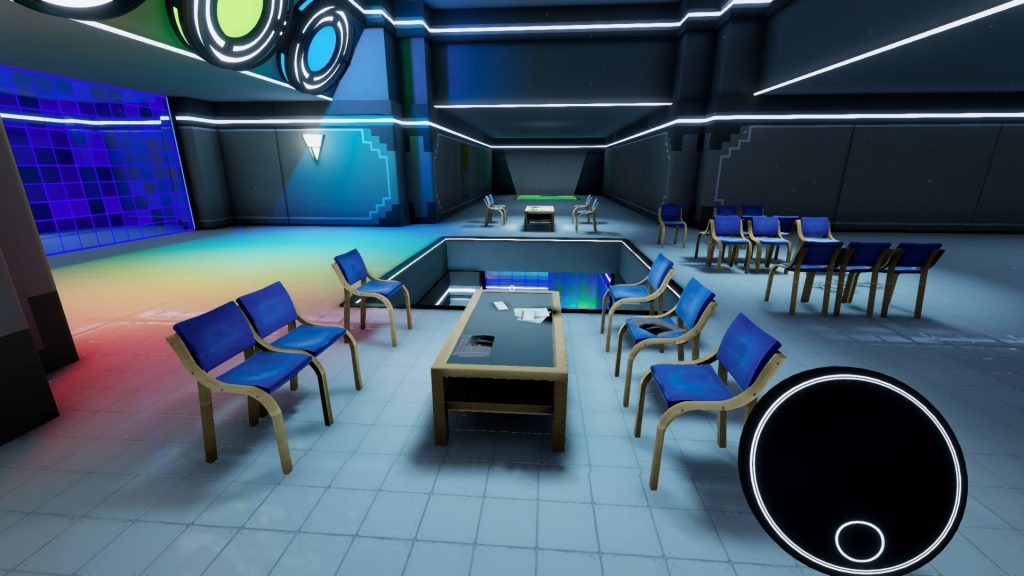 There’s a great pacing to it with each floor covering it’s own set of rules and obstacles. You tend to acquire knowledge from the previous puzzles and apply it to your new challenges and The Spectrum Retreat lives very comfortably within its own routine. Time outside of testing gives you an opportunity to relax and explore but it’s never too long to feel like lost momentum.

If there’s one complaint about the puzzle design, it’s the fact you can paint yourself into a corner. Discard a colour in the wrong block and you may have to restart the floor from scratch. Whilst you can recover quickly (providing you’ve got a decent memory), the lack of checkpoints makes the more involved tests feel like chores. Whilst difficulty and pacing felt right, this omission can take the wind out of your sails.

Thankfully the puzzles work really well and incorporate everything you’ve learned. Spacial awareness is put to the test and the latter challenges play with perspective in a way that’s really fun to comprehend. It doesn’t play at a pace that’s too disorientating so you can mull over your next move without fear of the clock. Solutions feel set in stone. I’ve not spotted any alternative ways to complete puzzles or speed the process up. With the lack of checkpoints, that’s a shame, although the game’s not especially long. It’ll probably take you a weekend of playing and the length feels nicely balanced. Colours are handed to you so sequentially that you can take things step by step. 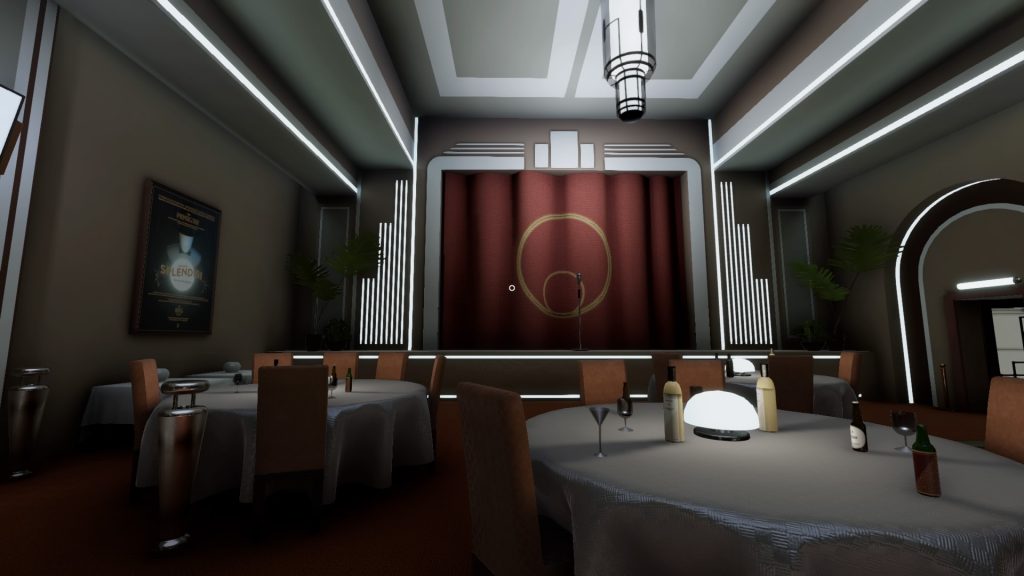 The Spectrum Retreat looks pretty good. The hotel appears lavish with the robotic staff behaving appropriately dry and helpful. Lighting gets the occasional moment to poke through curtains but the retreat, whilst well-kept, appears empty. Imagine staying in Blackpool in January and being one of six guests. The testing areas carry a different kind of sterile isolation. With puzzles focused around colour, you’re given a more diverse colour palette to watch. The walls look artificial and steel in nature and contrast well with the ordinary look of the hotel.

Music is played more for ambience and tends to appear mostly in puzzle rooms. It’s quite understated and I didn’t really notice it until the final floor of puzzles. I guess it fits with the isolation The Spectrum Retreat likes to live in and he small cast are do there jobs very well.

The Spectrum Retreat handles its puzzles colourful puzzles very well. The difficulty seems well pitched and the game’s sense of routine really helps maintain the game’s pacing. Some of the plot lacks a punch but there’s very little that feel superfluous. It’s right, smart and enjoyable to play through.

The Spectrum Retreat
8 Overall
Pros
+ Very nicely paced.
+ Clever puzzle design.
+ Great use of colour and detailed environments.
+ Captures isolation very well.
Cons
- A lack of checkpoints can lead to trial and error.
- The story beats feel a little telegraphed.
Summary
There's a lot to admire with The Spectrum Retreat. It feels well executed and considered. There's a great sense of isolation and the puzzles are designed well to allow players to take their time and consider their movement. It's a competent, thoughtful effort that, in spite of what I think of the story's impact, manages to succeed with some clever puzzles.