The sport of rugby’s had a troubled time since EA left the building. On console, your options are limited and, whilst licensing can be acquired, quality is sometimes slow to follow. Such was the case with Rugby 15. HB Studios’ calamitous effort proved buggy and troublesome to play and, as a result, EKO Software have stepped in to produce this year’s effort. Has the change done them good? 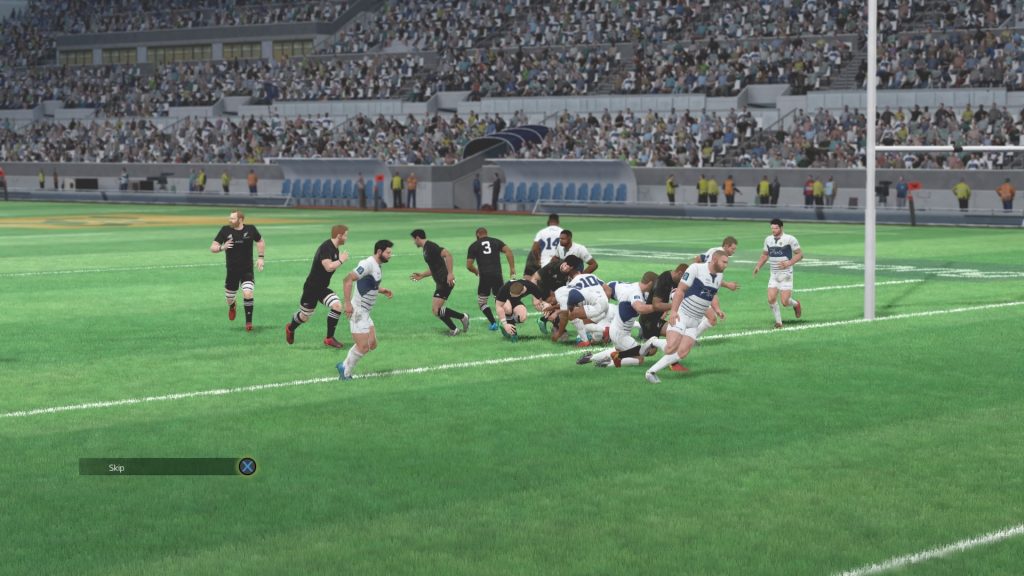 On the face of it, the new developers have managed to get to grips with the fundamentals of the sport well. With their prior experience on the Handball series, there’s some potential for an easier transition to the attritional nature of rugby. The basics are all there and tutorials are present to help introduce players to the key mechanics. As a casual fan of the sport, this is welcome. It doesn’t go deeper but it helps establish a baseline understanding. It helps make the key contests easier to comprehend, although a more nuanced training mode would’ve been preferred.

Controls are simple enough to grasp. Gameplay takes place from a single vertical view, similar to the Madden series. You use the shoulder buttons to pass either left, right or backwards. In possession, face buttons deliver kicks which you use to chip and chase and gain yards. Defensively, your options range from your standard tackles to doubling up to close gaps. You can’t really set formations up to combat persistent threats but the basic options can mostly suffice. 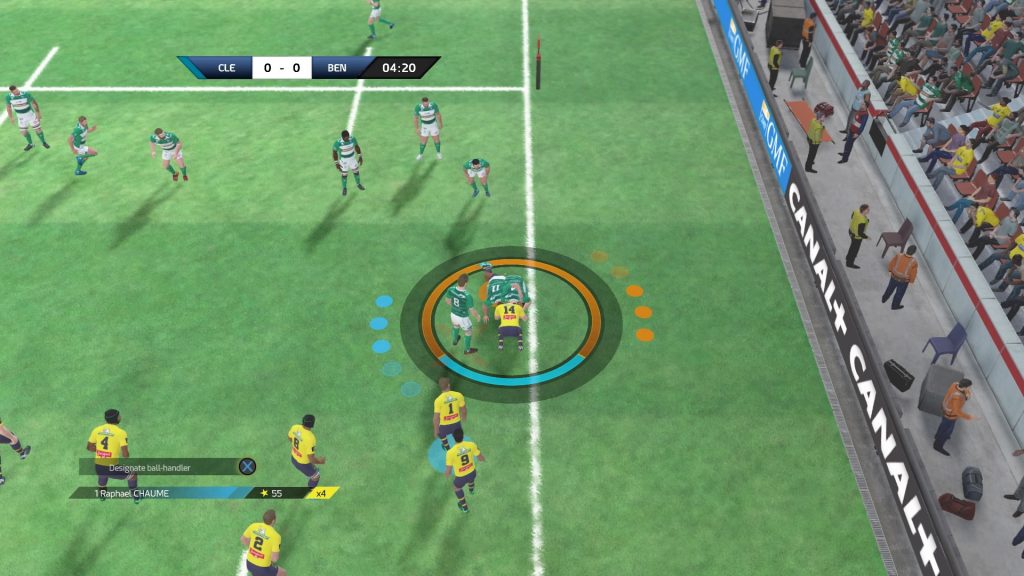 When the hits come and play halts, meter management comes into play. Rucks, scrums and mauls are commanded by visual indicators on screen which show you who’s gaining the advantage. If you time your entry right to rucks, you gain more, as well as the control you’d gain from adding more numbers to it. It’s the most common mini-game you’ll come across but I found it quick enough to grasp. One problem that arises from this is how chaotic it can feel when a ruck materialises. Ideally, you want it to happen near your pack so you’ve players at hand to gain possession. In practice, sometimes your closest option is out of action or players delay before getting into the action. It can feel clumsy and disorganised.

The game struggles to really establish a flow or momentum. Part of that can be down to how the engine chooses your closest option as a move breaks down. Passing is usually crisp but I’ve had instances where a player can’t release quick enough, under little or no pressure. It could be down to that player’s individual stats but it doesn’t help when the opposing pack and bearing down on you. Player positioning can be adjusted via the d-pad but sometimes you’re left with players nowhere to be seen or they’ll go narrow into trouble when there’s obvious space to run into. It’s a game that seems focused towards the set plays and, as a result, the other aspects of the match can feel unfinished. AI ranges from being generous to being ruthless, even on Amateur difficulty. It’s unbalanced and will test your patience. 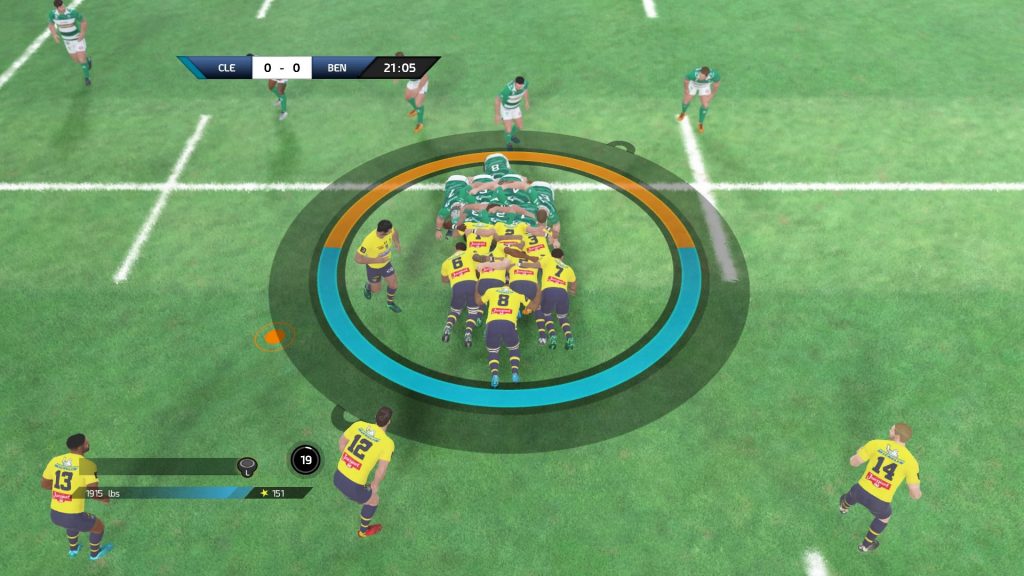 That said, try scoring is satisfying as you break the defensive line or just edge over the goal. Whilst I am frustrated by the stifled grind, success is fun to achieve and tackles carry real weight and impact to them. The groundwork of a good Rugby experience have been laid with a few omissions limiting the play.

Modes and teams are slim. Licensing has been applied for some of Europe’s prominent leagues with player likenesses being available for almost everyone. The game looks delivered on a budget but there’s individuality to the players, although the perspective doesn’t often give you the chance to look at them up close. Aside from the usual quick play and league options, you have a career mode and a My Team mode that appears to step into the same territory. 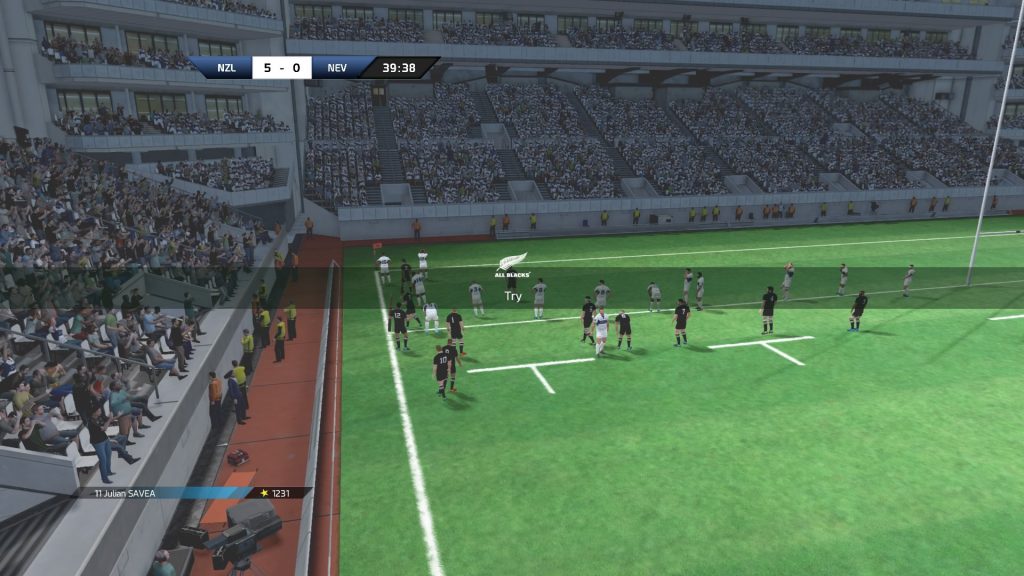 Think of the Career mode similar to Pro Evolution Soccer‘s Master League. You start with a meagre budget and build a team from it. You have objectives throughout the season which helps bolster your bank and purchase new talent. It’s an interesting mode that might offer the most time spent. My Team is effectively a fantasy team building mode that is strictly for quick play matches. You accumulate currency for this mode throughout the game but it’s surprising to see this not fleshed out.   There’s a weekly challenge available for you to tackle but, again, it offers only a small diversion.

All told, Rugby 18 is a tough act to justify.  A game on a budget with a full price, the focus of the sport’s larger set-pieces has resulted in some of the fundamentals being neglected.  There’s fun to be had but also plenty of moments where your patience will be put to the sternest test.

Rugby 18
5 Overall
Pros
+ Surprisingly accommodating for new players.
+ Licensing is used relatively well.
+ Tries can feel well worked and rewarding.
Cons
- Very much made on a budget.
- Player positioning is inconsistent.
- Matches have no flow or momentum to them.
- Very light on game modes and international teams.
Summary
Whilst a change of developer has produced something much improved and playable, Rugby 18's rendition of the sport lacks a flow and cohesion which I find problematic. Set plays are focused whilst the open play is unbalanced and frustrating. There's a foundation there but the lack of modes and teams make the price tough to justify. There's fun to be had but, those wanting something more robust might await a drop or hold back a year.