Regalia: Of Men and Monarchs is an unashamed love letter to the golden age of JRPGs, bringing to mind the Final Fantasy Tactics and Suikoden games to name a few, especially in terms of character and world design.

After a successful crowdfunding campaign and an encouraging debut on Steam, Regalia has made the leap to current gen consoles largely intact. Charismatically drawn character designs and Nobuo Uematsu styled music all add to the feeling of this being a JRPG. As it happens Regalia  is a  heartfelt homage from a small independent dev based in Poland. No doubt the backers got what they asked for as this could well have been released fifteen years ago, even down to your ability to save only being possible on camp sites or on the world map.

At first you’ll find yourself bombarded with tutorials, perhaps made it difficult to stay on top of all of the gameplay mechanics the game was throwing at us. 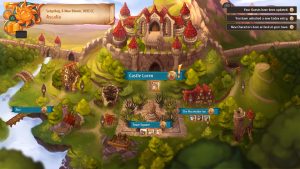 The crux of the plot is that your long dead ancestors have left the kingdom to you but not before becoming heavily indebted to the equivalent of the Iron Bank (for those of you familiar with Game of Thrones). Naturally, you travel to the kingdom and claim what is rightfully yours. Only to find an abandoned castle full of junk with no real assets to speak of.

As word gets out there’s new king on the scene, various visitors show up.  The first of which is a representative of said bank (much like how the first letter you get when you move house is from TV Licensing). More exposition soon follows, the net result being you have two in-game months to fulfil four ‘Kingdom Quests’ before they return and foreclose on the kingdom which will lead to your game being over. This is just the opening chapter too, this game will occupy you for ages (just like all JPRGs). It’s vast.

After what seems like endless plot exposition and scene setting,  you’re eventually thrust into the action. Or rather you’re not. If you’re expecting the game to be delivered to you on a plate, you’re in for a shock. To actually get cracking skulls you need to go into your crumbling palatial pile and specifically state you’re up for the fight. Initially I spent forty days talking to the NPCs one by one hoping it’d trigger a mission until I realised I was probably barking up the wrong tree. One downside of reviewing a game in the company of Jack Daniels then.

Thankfully the game autosaves at the outset so you can go back easily enough and begin as the developers no doubt intended, a few pointers might have helped though. 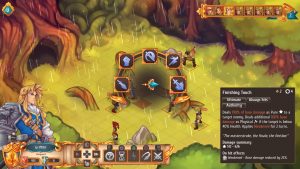 Each subset of missions is denoted a dungeon, generally they eat up seven or eight days of your allocated total. They’re only deemed clear when you complete all the missions in each, fair enough. But if you’re really struggling to clear a particular mission as I was (specifically one where you had to defeat all enemies in seven turns or less), you might do better to sack it off altogether and try another dungeon instead. You’ll take a hit on your day counter but during the opening act at least, you have something of a margin of error.

The combat itself is turn based where you move first, attack and then move out of range if you have sufficient initiative points remaining. It has the isometric viewpoint of Final Tactics with the line of sight mechanics of classic Julian Gollop title Laser Squad (or UFO: Enemy Unknown if you prefer). Sadly none of the overwatch where your character auto attacks if an enemy comes into range. This is understandable given only one of your initial party has a proper ranged attack, but as your party expands it’s a shame that it’s not added as an option. 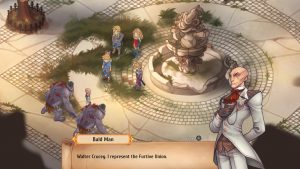 Initially your party is just the king and his big brother but your party is soon expanded with the addition of a snarling animalistic wildling, not unlike Gau from Final Fantasy 6, and a fire mage with various powerful ranged attacks. These four combined are well equipped to take down the initial enemies with battles only really becoming much more tricky when one is eliminated during a sub mission. Other characters will join you as you progress through the story albeit some only for one mission.

Generally you’ll manage to get through if one ally is incapacitated but if two or more are out of action you’re on a hiding to nothing. Losing an ally during a mission means they’re unavailable on subsequent missions unless you revive them at a campsite. Early dungeons have just the one which is generally enough, but subsequent harder dungeons have extras to give you a fighting chance to complete all the missions.

There will come a point when a battle that’s repeatedly been a stumbling block will easily be completed. It’s when you hit this sweet spot that you really feel like you’re getting somewhere rather than repeatedly running into a brick wall and knocking yourself out again and again. It took me a while to get a feel for the various strengths of each party member, but once I got to this point the game really opened up and I felt empowered to take on the next battle rather than get battered once again. 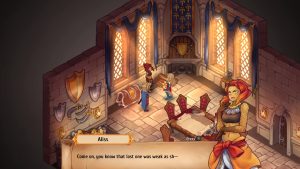 The music is wonderful and I’ve found myself with various themes rattling around my head during idle moments. It’s a little repetitive though, so it’s true to its inspirations in that respect too. Atmospheric ambient effects and general sound design are also mostly excellent. Though some enemy characters have sound effects that we’ll be happy if we never hear them again. There’s only so often you can hear a feline character meow at the start of their turn and not be tempted to hit mute, yes we get it, you’re a fucking cat.

One major bugbear in the initial stages of reviewing Regalia was the fact that the Save/Load menu had dodgy button mapping. Your default action button X being mapped to Load rather than Save. Not dissimilar to the sense of dread when you click ‘No’ when asked to save an Excel spreadsheet. Ok, maybe that’s just me. I must have reverted to an earlier save at least half a dozen times during this review. Very annoying and often enough to make me call it a night.

The developers thankfully resolved this with a patch that hit before the game released, making for a much less frustrating experience. This alone shows a dev willing to admit when their game needs tweaks to the UI and general interface. For this they should be applauded as there’s games I have that still have day one issues outstanding two years after release.

Other much larger codeshops could well learn from this small indie rather than waiting for a shitstorm to erupt and take action retrospectively once everyone else has moved on to the next big thing. Is anyone still playing Battlefront II for example? No, us neither. 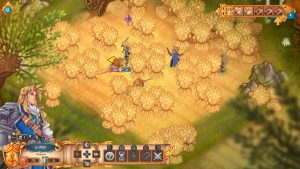 The same patch added a few tooltips in places where it wasn’t immediately clear as to what you had to do, especially where NPC characters blocked access to the save icon in campsites. A welcome change then.

However it’s not all great. Occasionally you’ll struggle to see what’s going on due to the sheer amount of furniture on a battlefield, it’d be useful if you could rotate your viewpoint to get a better view. Perhaps you can already do this, although if you can, this reviewer has failed to find out how from the tutorial notes. Something as simple as a diagram showing the controller mapping might well help. Also it’d be nice if you could zoom in during the later stages of a battle when it’s just you and a handful of enemies remaining. This might just be us wanting to see the beautiful art up close though.

In addition, controlling battles using an overly fiddly radial wheel can occasionally lead to choosing the wrong attack. This can sometimes mean the difference between a decisive blow and you failing a battle.

All in all then, Regalia is an accomplished turn based RPG with challenging yet rewarding gameplay and wonderful character design and music that evokes a strong sense of nostalgia for the latter day PS1 days that is slightly let down by its occasionally unwieldy interface.

Regalia: Of Men & Monarchs (Royal Edition)
8 Overall
Pros
+ Rewarding gameplay
+ Stiff challenge
+ Beautiful graphical style and evocative music in the classic JRPG tradition
+ Active developers who are actively listening to their community to improve the game
Cons
- Initially steep learning curve
- Bombardment by text in the opening stages
- Screen furniture can obscure action
- Not the most intuitive game to control & controls can be a bit clumsy sometimes
Summary
Regalia is a wonderful love letter to JRPGs of yore with beautifully realised graphical style and evocative music. More than worth checking out, our current obsession in fact.