Punch Line is an anime that’s been adapted into a visual novel with minor gameplay sections for the PS4 and PS Vita. I’ve only dabbled with the anime but apparently, although it follows the story closely, there is quite a bit of extra content here. That might be reason for fans of the show to have a look, people who don’t know the premise should read on, you’ll know if it’s for you or not pretty quickly. 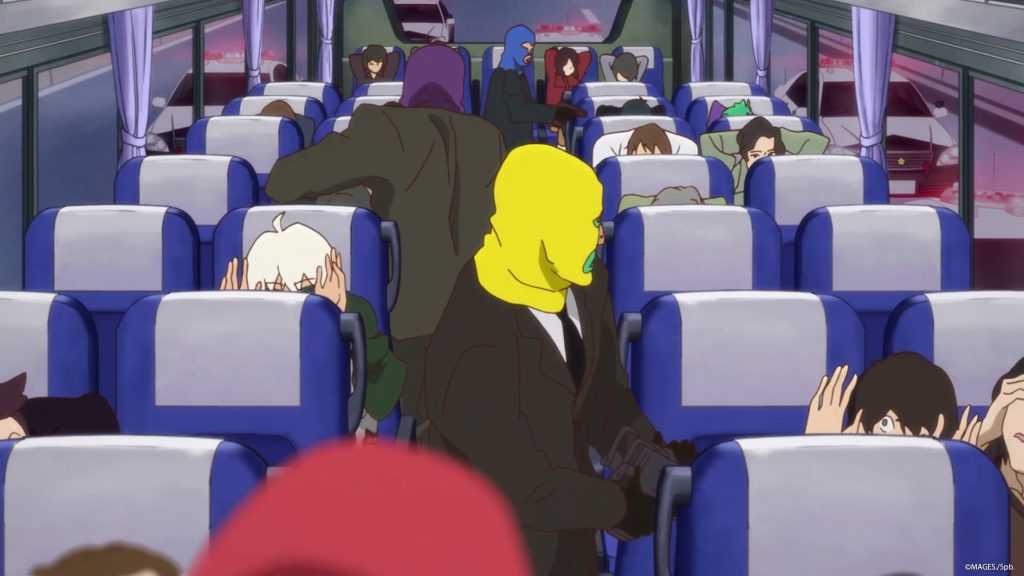 You play as Yuta Iridatsu, a boy who lives in an apartment block with four girls. After a bus he’s on gets hijacked by terrorists his spirit is ejected from his body and he must find a way to take back control of it. Also, when he gets overstimulated by seeing girl’s ‘panties’ a meteor hits Earth wiping out humanity. You’ve either tuned out by now or are intrigued to read on, so for those still with me, let’s continue.

As a spirit Yuta is restricted by how far from his body he can move, so the game takes place entirely around Korai House and its grounds. Your room is blocked by talismans and your power as a spirit is limited so all you can do is manipulate the other occupants into aiding you in your quest. The majority of the game is visual novel, so you’ll be reading a lot of text. The characters are fully rendered in 3D however and are animated which is unusual for the genre which generally just uses still 2D portraits and everything is fully voice acted, though only in Japanese.

There are quite a few fully animated 2D sequences from the show and these are very sharp and look very nice. Sometimes you’ll just see zoomed in shots of scenes which are less impressive but the mixture of 2D animated sequences, 3D talking head scenes and animated 3D sequences never feels out of place. 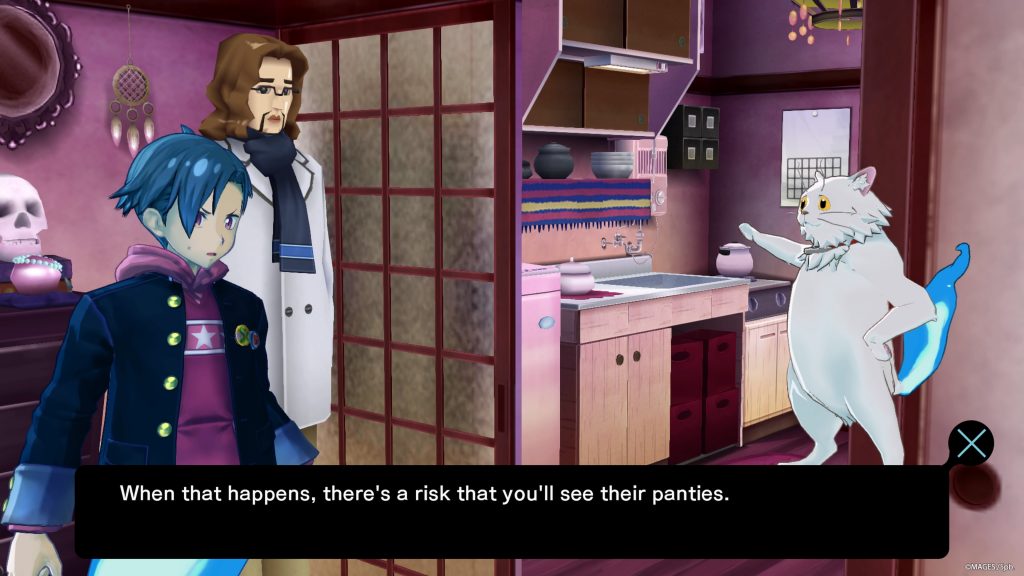 When you do get to interact with the game you are given either a room or a series of rooms in the house to work in, from fixed camera angles you can switch between. To increase your power you need to scare the girls a little, which the game calls Trick Time, by moving things or turning on appliances. Sometimes doing so will make them fall over and, uh oh, their undergarments may become exposed. Or sometimes a camera angle will just show you them, whatever. Stare at them for too long and you’ll become over stimulated and the world will end, but as a ghost you can go back in time to try again, luckily. You can have your panties and eat them!

Of course, simply moving the camera away from the panties will stop you from getting too exited and you can just move on, clicking on the few interactive things in the room. Your options are limited but so are your interactions, so the odd red herring here and there may be enough to make you start again.

Once you’ve startled a girl enough your power as a ghost will increase and you’ll be tasked with doing a Trick Chain. This will actually progress the story as you enter multiple rooms and influence multiple girls to do what needs to be done. Find a book for example. This plays out exactly the same as Trick Time but you need to interact with a few objects to set up a domino effect, one piece out of place and the desired outcome won’t occur meaning you’ll need to try again. 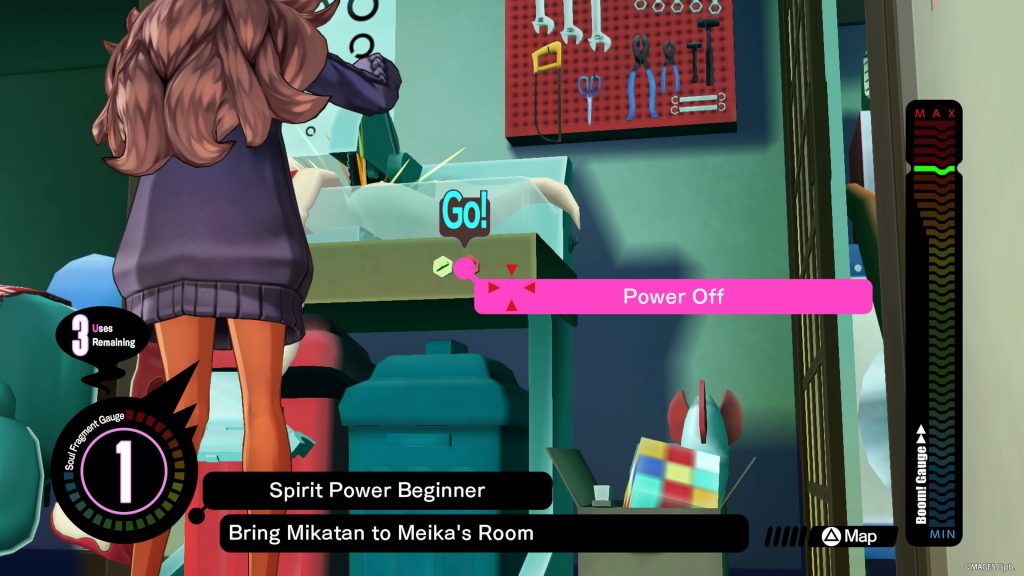 You get the hang of them but there isn’t a lot of logic to these sequences. Once you become powerful enough to write things you may think that writing down instructions would be the easiest route to success but the game will say that the pen isn’t working or something similar, costing you an action and making you take the round about way. You won’t know this until you try it and there’s no way to know that putting a banana skin on the floor will definitely achieve what you want to achieve but there aren’t that many options so you’re not going to be stuck for too long if you do struggle.

Once completed you’ll get some more story, finish the chapter and move onto the next to repeat the same steps. About half way through the game the Trick sections vanish and instead you’re given some binary choices to make, up until the end of the game where the final chapter or so are literally just watching an anime. Unlike a lot of visual novels the chapters are relatively short with them lasting between fifteen and forty minutes. This keeps things moving at a good pace and you can finish the game in around ten hours. Some visual novels would be barely getting started at this point so I appreciated the lack of time wasting and talking around the same points over and over. Each chapter starts with a opening sequence and ends with a credits, much like an anime and the pacing does feel like a series of episodes.

The overall story was a little convoluted, with plenty of elements put in just to confuse the player and keep them in the dark, but thanks to the pacing I was entertained throughout and everything is explained come the end. Obviously it doesn’t take itself too seriously, with its obsession with ladies underwear, and there are some humorous moments although some repeated jokes fall flat. The gameplay is limited and although there is a huge focus on underwear in order to progress you have to ignore it. There is a trophy for collecting all the underwear which means staring at them until you die, which contradicts how you progress, but you don’t have to act perverted in order to complete the game. 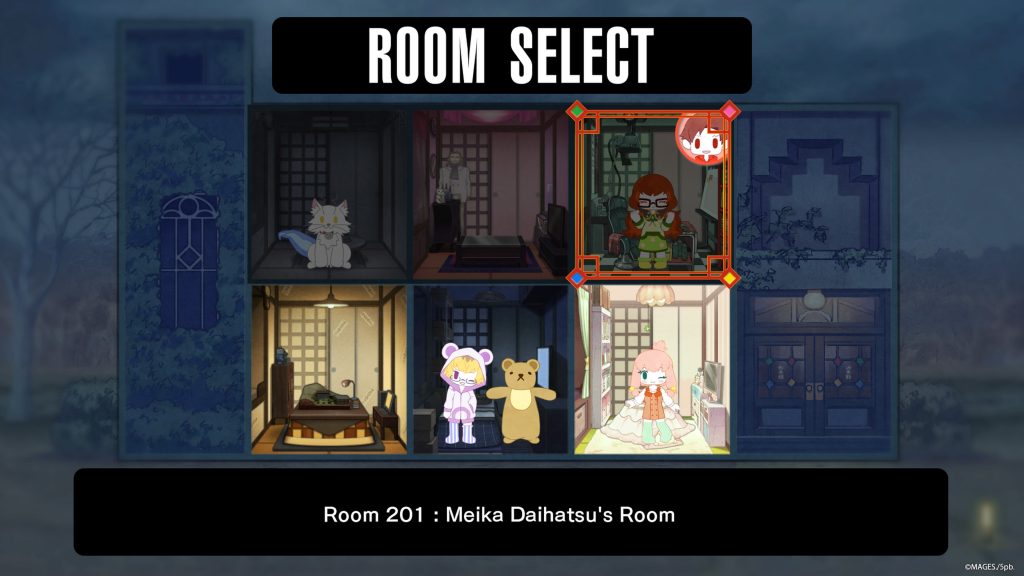 The content of Punch Line will put off many, the visual novel aspect will put off many others. For the niche audience that isn’t discouraged you’ll get a shorter than average visual novel that is paced well. Seamlessly using clips from the show along with some attractive 3D models gives it a feeling of being higher budget than most offerings as well. Fans of the show will get some extra insight into the story but will see a lot of repeated segments as well which stops it being a guaranteed purchase. If you made it past the second paragraph of this review then perhaps you could enjoy what Punch Line has to offer.

Punch Line
7 Overall
Pros
+ Animated sequences blend seamlessly with 3D stuff
+ Paced well
+ Interactive sections break up the reading
Cons
- Concept will offend some
- Interactions are limited
Summary
Punch Line is a well paced visual novel with light interactive elements. The subject matter may offend some but it doesn't take itself seriously and is more enjoyable for it.