Sony are ending the generation with a flourish. Whatever you think of their style, the major first party games released by Sony this generation have all been of a high quality. Now they’ve seen fit to release two games this summer, mere months before the start of the next generation. Ghost of Tsushima is the second and lets you explore an island of Japan in the 13th century. If you’re a fan of the open world genre then Sony’s form continues and the PS4 has set a high bar for the PS5 to live up to. 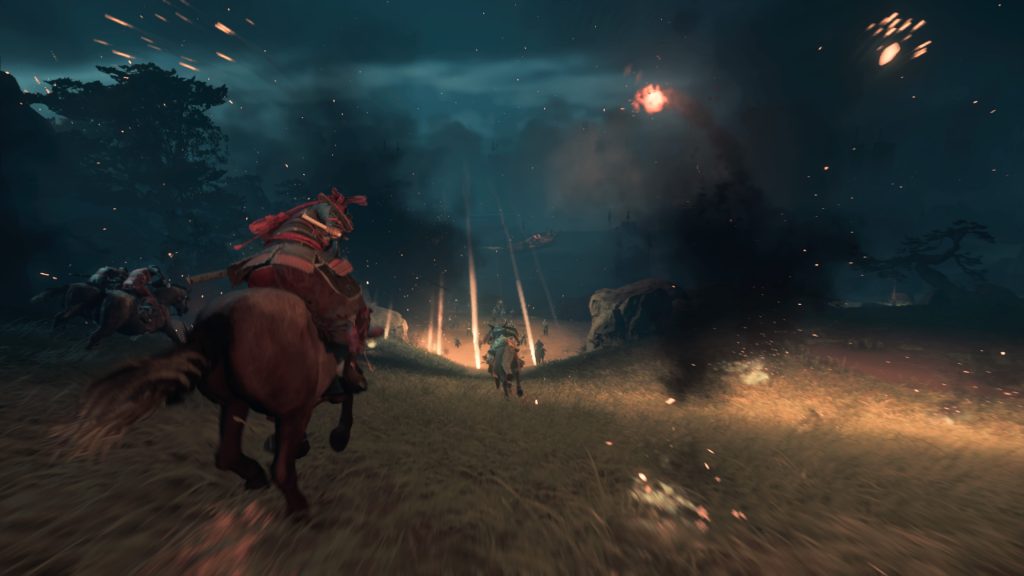 Ghost of Tsushima starts as a Mongol invasion is taking over the island. Heavily outnumbered, a band of samurai face them on the beach but are caught out by the Mongols’ battle tactics and what they deem as a lack of honour. They are all wiped out apart from Jin Sakai and his uncle, the leader, who is captured. Jin is defeated but is rescued and nursed back to health by a thief called Yuna. It’s this friendship with her that opens Jin’s eyes to the fact that honour might not be enough to defeat the Mongols and save his uncle and that he may need his own underhand tactics to succeed.

You start off in the world with your sword and a horse with a reasonably sized map to explore, with other areas blocked off by story progression. If you take on Tales (story missions) you’ll gain new abilities to broaden your approach to situations. These include a bow and the ability to stealth kill which both remain useful for the entirety of the game. If you simply explore the landscape then you’ll find methods for increasing your health, granting more resolve (used to heal and for abilities) and allowing you to equip more stat boosting charms. You may stumble upon these by chance or, if you pay attention, the world will be your guide. 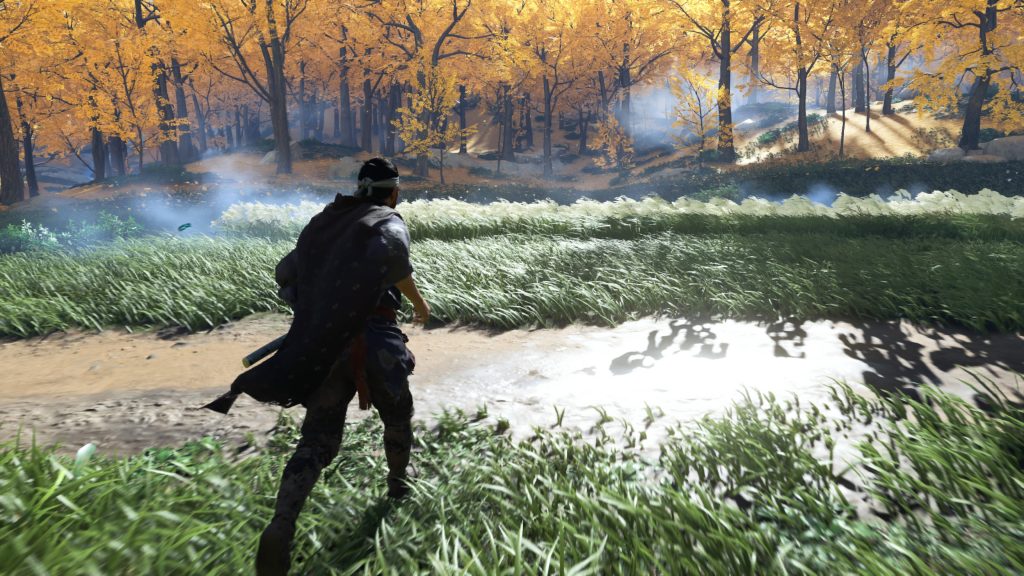 The world is the star of the show in Ghost of Tsushima. Being such an early time period there’s plenty of nature and settlements are few and far between so there’s lots of lush, grassy fields and forest areas for you to drink in. The scenery reacts to both Jin as he runs through the grass and the wind blowing through it and the trees and makes even a stationary shot feel particularly alive. The use of colour and light is really incredible and makes Tsushima a joy to explore.

The aforementioned wind is always blowing. It acts as your guide, your breadcrumb trail to your next mission or waypoint. Even when it’s subtle it’s pointing you in the direction you want to be heading in but if you’re unsure a quick swipe up on the touchpad will create a gust of wind making sure you have no doubt about the direction you need to be heading. There is a map you can look at that will point out missions you can start and if you venture close enough to points of interest or talk to select NPCs then they will appear on the map as question marks.

Sometimes however you’ll be running to your next location and you’ll hear the chirp of a bird. If you spot it it will lead you to a nearby point of interest that you have yet to find. You can just eyeball the map constantly if you want but there is no mini-map and the devs obviously want you to try and play within the world itself as much as possible and it works. You will want to fast travel from the map now and again however and the load times when doing this are refreshingly fast! Even loading up the game is sub-30 seconds but a fast travel barely gives you time to glance at your phone which has caught me out a few times thanks to the long load times of other games. 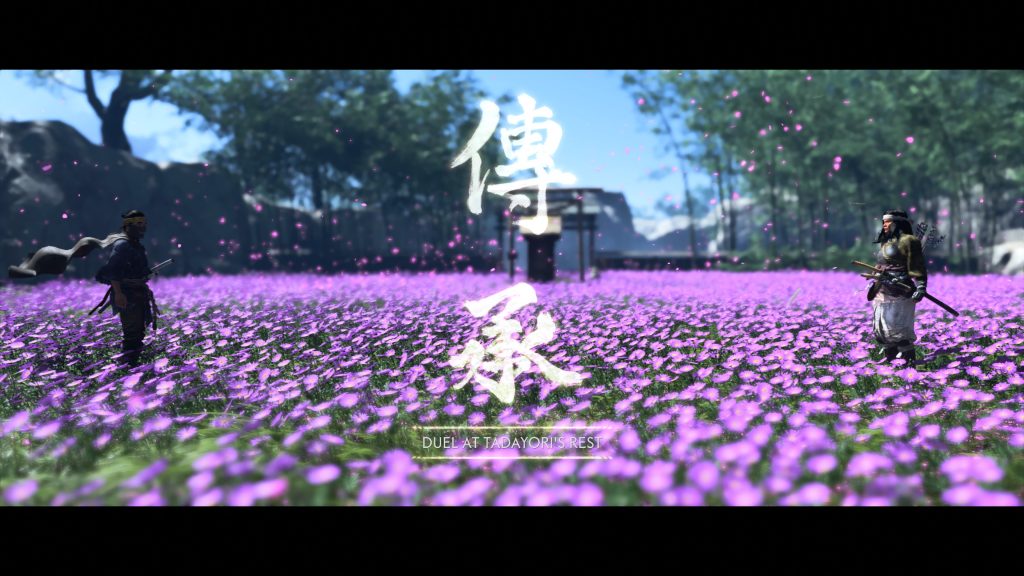 Naturally you’ll often be required to fight. Whether you’re clearing encampments, completing missions or just encountering enemies on the road you won’t get far without spilling some blood. As stated to start with your means are limited but as you progress you’ll have lots and lots of options on how you approach situations. Stealth is one way. Sneaking through tall grass and along rooftops until you get within striking distance of a lone enemy or firing your bow at someone from distance allows you to clear out whole encampments silently. You can’t move bodies so they will get spotted out in the open but you’re more than able to play a lot of the game via stealth if you so choose.

If you do get spotted and it all kicks off then your samurai skills will come into play. As you advance you’ll unlock different stances and each stance is intended for use against a certain enemy type. Using the correct stance against the right enemy type will give you a huge advantage and at times you can really bully the enemy. They have a stagger meter which if broken with heavy attacks will open them up for a time. If you don’t have the required stance yet then you’re going to have to make use of your block, parry and dodge to open them up. 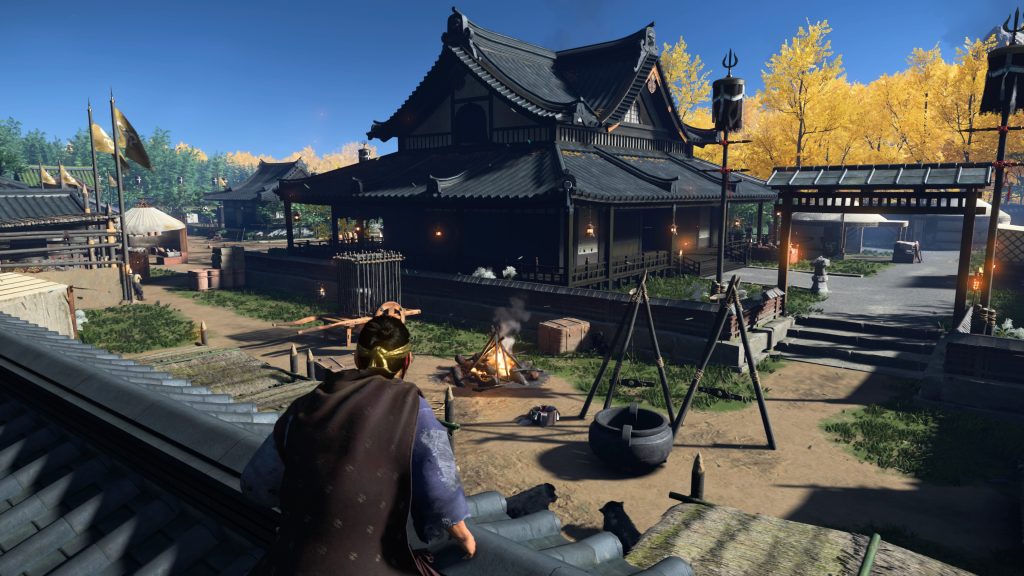 Enemies will quite happily surround you and although they will take it in turns to attack they aren’t shy in coming forward when you’re attacking one of their friends. When things go well the combat feels really very nice and I’m reminded of my Sekiro review where I said it was the best sword fighting I’d seen in a game. They aren’t the same but the rhythm of having patience, waiting for an attack before deflecting it and landing a finishing blow, dodging the next attack from one enemy and wailing on another to break his guard, deflecting another enemy before finishing off the previous one and so on until everyone around you in dead is very satisfying. If you’re confident you can stride up to a group and challenge them which results in a stand off allowing you to fell one or more enemies in a single strike but announcing your location to everyone.

That’s without even mentioning the ghost weapons like kunai to stun foes, smoke bombs to escape or explosives. I’ll be honest, I was such a fan of the fighting that I rarely used these tools and just fought purely and had a great time. It’ll depend on the player how you approach combat and for an action game that’s quite impressive. There is a skill tree but that’s more about enhancing what you already have rather than creating a build. 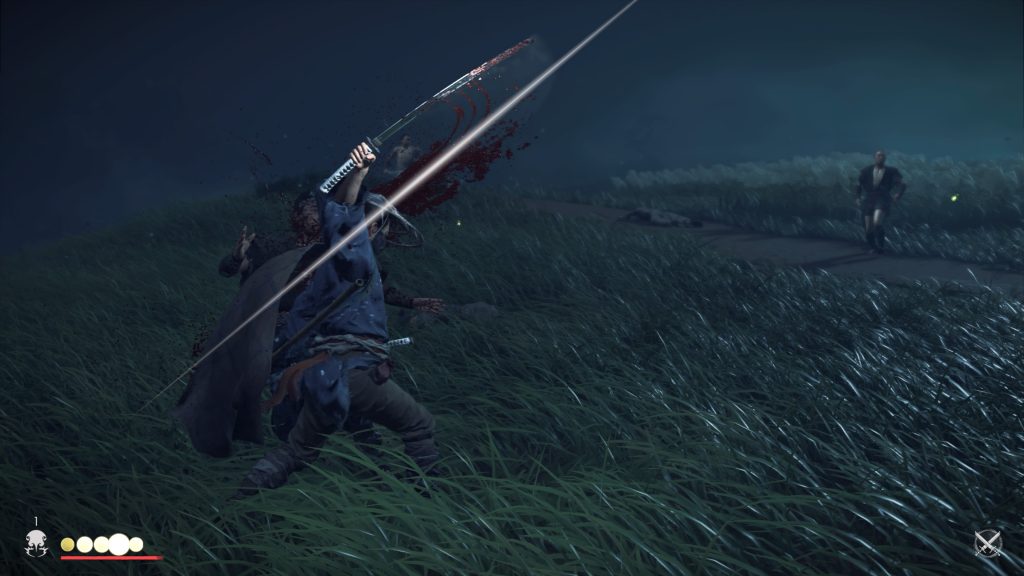 On Normal the enemies can hit quite hard but this can be mitigated depending on the armour you’re wearing. If you do get hit then you can heal yourself by pressing down on the dpad at the cost of one resolve which builds up as you fight. As I said once you unlock the stances you can actually bully quite a few enemies but as you progress enemies do get tougher and more aggressive so you always want those fundamentals at hand.

If you enjoy open world games then Ghost of Tsushima caters to you perfectly. It doesn’t do anything drastically different and some may find that to be a little disappointing, to be doing similar map clearing activities as you’ve done in other titles. I’ve enjoyed the Tales missions and each major character has their own story and arc which is enjoyable and well performed. However I’m the type of player who seeks out the points of interest on the map, getting the rewards for exploring everywhere and I’ve enjoyed that aspect of the game the most. I’m not so much of a fan of collecting lots of materials constantly for upgrades though. If you struggle with the combat then that might be a problem for you but as stated I found that to be enjoyable and rewarding as well.

Not perfect however. When fighting there is no lock on. Not really a problem too often when attacking enemies as the game does a decent job, most of the time, of attacking whoever you’re trying to. However the camera has a hard time showing you all the information you need sometimes and if the camera was trained on the correct enemy then this problem would be alleviated somewhat. If the camera was pulled out a little then that would help too. 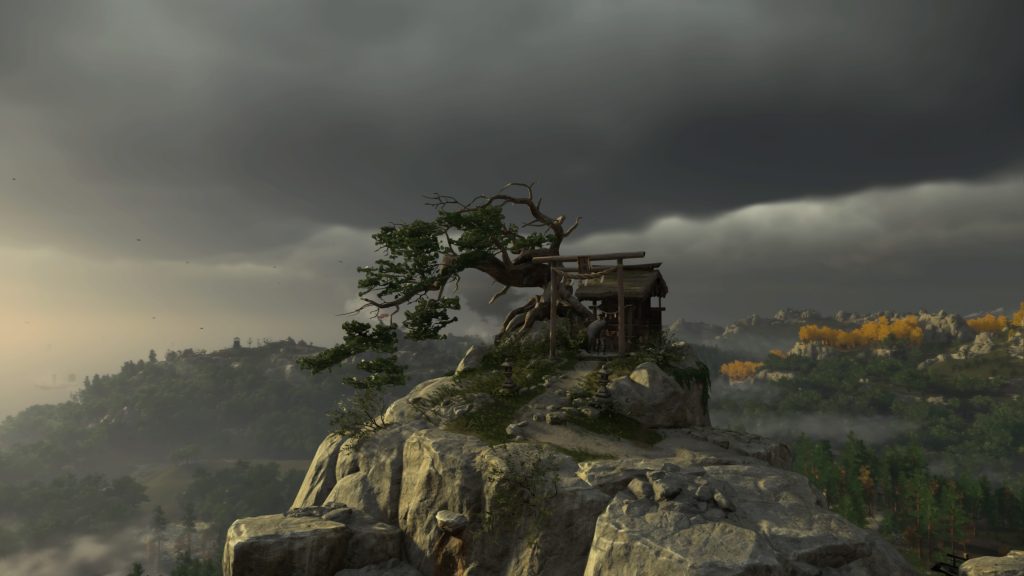 As enemies surround you they can often be off screen or you can even dodge an enemy which ends with them off screen and then they send an attack your way you can’t see. This is exacerbated when there are objects around as the camera either gets caught on walls or doesn’t turn objects transparent meaning you end up looking at a bush rather than the fight in progress. Attacking and dodging is on the face buttons so controlling the camera with the right stick at the same time isn’t particularly easy though it is something you adapt to as you make your way through the game.

You do get some options to enhance the atmosphere if you so choose. There’s a Kurosawa mode which drains the colour from the screen and adds a film grain effect, but as I stated earlier the colours play such a large part in the visual style that I didn’t really dabble with this. You can also play the game with Japanese voices if you want, though the lip syncing doesn’t match up here. I enjoyed the English performances so stuck with them but it’s nice to have options. Like the choice on a PS4 Pro of a frame rate or resolution mode. I opted for the resolution mode and only noticed the odd frame drop so I’d recommend this to those with a TV to take advantage of it. There’s also a very in depth photo mode if that’s your bag. 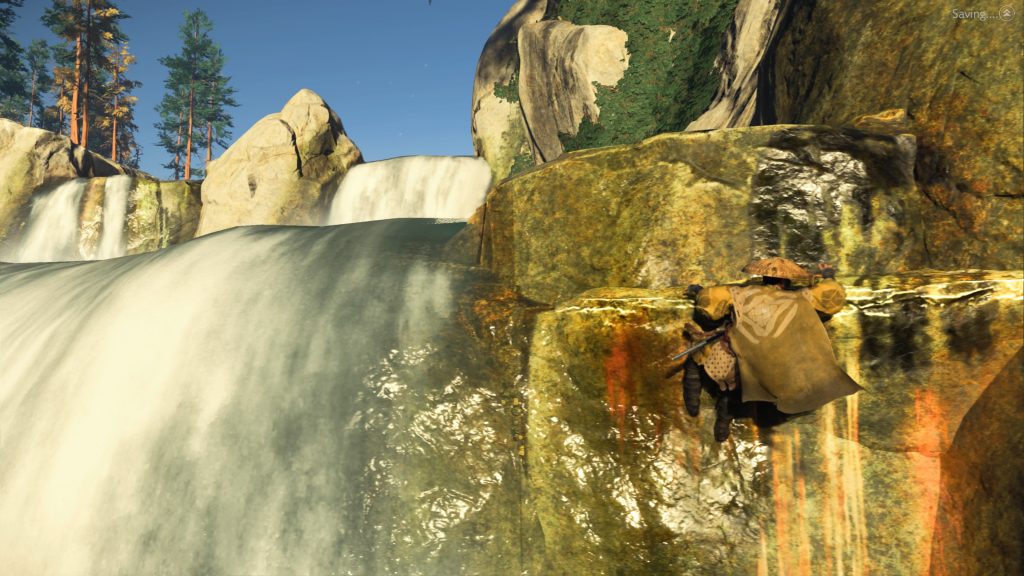 As I started this review saying that Ghost of Tsushima continues Sony’s form of strong first party games there’s no surprise that I’ve enjoyed my time with the game. I do find comfort in an open world however, checking off the markers and filling out the map. People with an aversion to those types of games may struggle with this, unless the setting and the combat pull you through. Apart from the camera issues in battles everything else is very well made, if by the numbers. I can easily recommend Ghost of Tsushima as a great swansong for the PS4 and a very strong open world game. Don’t go in expecting anything game changing and you’re in for an often breathtaking experience.

Ghost of Tsushima
8 Overall
Pros
+ Beautiful world
+ Combat feels fantastic
+ Very fast load times
Cons
- Camera during combat is quite poor
- By the numbers open world
Summary
Ghost of Tsushima is a beautiful open world game with satisfying stealth and combat. It does little different to other games of a similar nature and the combat camera needs some tweaking but those who like exploring and savour filling in a map are in for a treat.

One thought on “Ghost of Tsushima – PS4 Review”