I really enjoyed Shadow Tactics: Blades of the Shogun back when I reviewed it three years ago. I haven’t played the first two Desperados games (or the third expansion-esque one) but quickly found myself at home with Desperados III as it very much feels like a sequel to Shadow Tactics by the same developers, Mimimi Games. A quick bit of YouTube research shows that the modern games owe a lot to the originals with far more similarities than not. Luckily this is a prequel so you don’t have to have a grasp of those games to play this one, but if you have you’ll recognise the characters that you’ve not seen for nearly thirteen years. 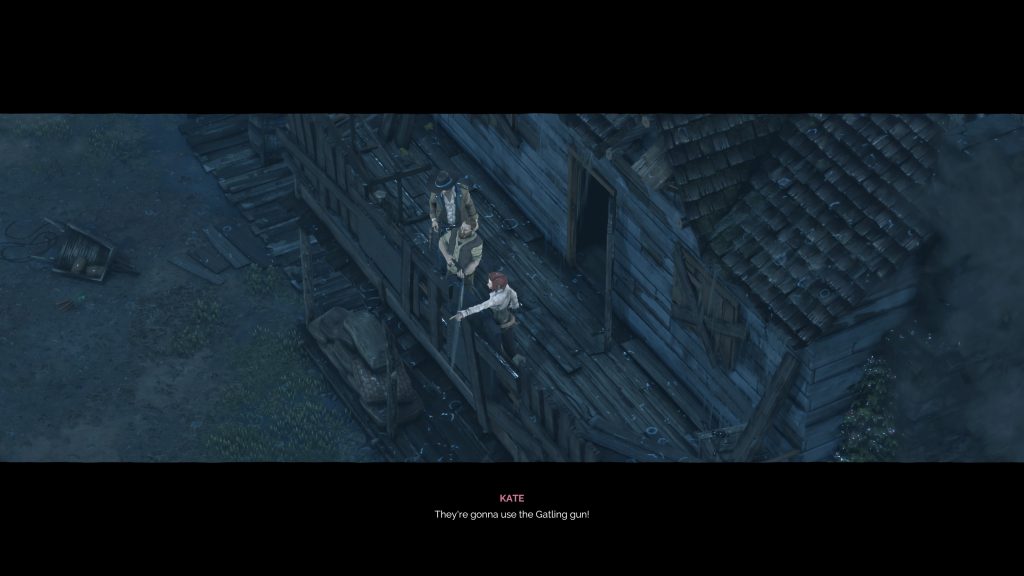 Desperados III is a real time, stealth strategy game. You directly control a character from an isometric perspective rather than using a mouse pointer and you need to observe enemy movement, vision cones and environmental aids and hazards to sneak through. It’s not instant game over if you are spotted but you’ll make things a lot harder for yourself if you are as the characters have small health pools, limited ammo and alarms draw more enemies into the level.

The main protagonist is Cooper, following his quest for revenge in the Old West. He can distract an enemy’s attention briefly with a coin toss, throw a retrievable knife for a silent ranged kill and shoot with his pistols, including killing too people at once. His friend Hector is along for the ride, he can whistle to draw enemies over to an area, has a bear trap he can place on the ground and a shotgun that will kill anyone within its cone. Dr McCoy has a sniper rifle to take enemies from distance, knockout gas that can stun a group of enemies for a short time, his medical bag can draw enemies towards it if left within sight and he can pick locks. Kate can use disguises to wander into areas the others cannot, distract and lure enemies with her womanly ways and can temporarily affect an enemy’s vision cone with a thrown bottle of perfume.

Players of Shadow Tactics will recognise all of these abilities but they were in the originals too so you can’t be too mad about it. I’m assuming the developers thought the same thing though as there is a fifth character with a lot of unique abilities. Isabelle has voodoo powers which are a lot of fun to play with. She can take control of an enemy at the cost of her health a limited number of times to make them kill their allies or simply move them out of the way. She can link two living beings so that whatever happens to one happens to the other and she also has a cat who she can tell to distract enemies, reducing their vision cone for a short time. 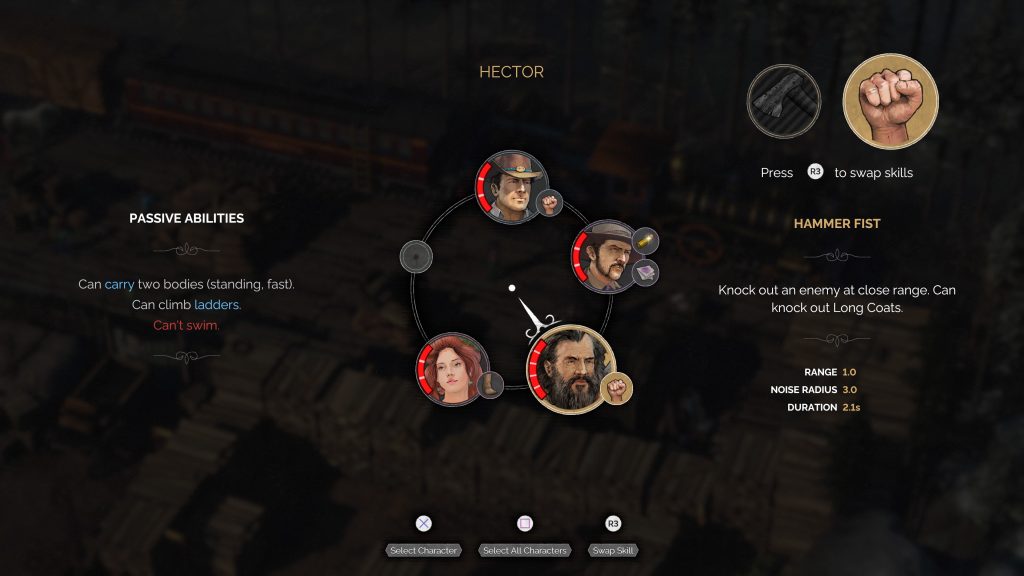 Combining all the characters powers to clear out levels is the key to success and each level will have a different character pool to use meaning you can’t just pick some favourites and stick with them. Different enemy placements and types will also dictate how you advance, with grunts being easily distracted and lead away by Kate (unless they’re women) and anyone can kill or knock them out in hand to hand, whilst enemies wearing ponchos won’t deviate from their path and long coats are stronger, requiring Hector to take them out in hand to hand or to be shot first before another character slaps them down.

Different characters also have different abilities for moving around the environment and carrying bodies. Cooper and Isabelle can carry one body and can swim and climb vines and ropes whilst others can’t. Hector can carry two bodies and still move at pace. Kate and McCoy can only drag bodies which is slow but as they are crouched when doing so they are harder to spot at a distance.

Desperados III keeps the same vision cone system as Shadow Tactics, with solid sections near to the enemy and near any light sources which you want to avoid at all costs and a faded section which you can be crouched within and not be spotted. You can only highlight one enemy at a time to see their cone so scoping out the area and visualising a safe path is key. You can also place a marker which will draw a line to any enemies that have a view of that area. You have all the tools needed to make progress it’s just up to you to learn them. 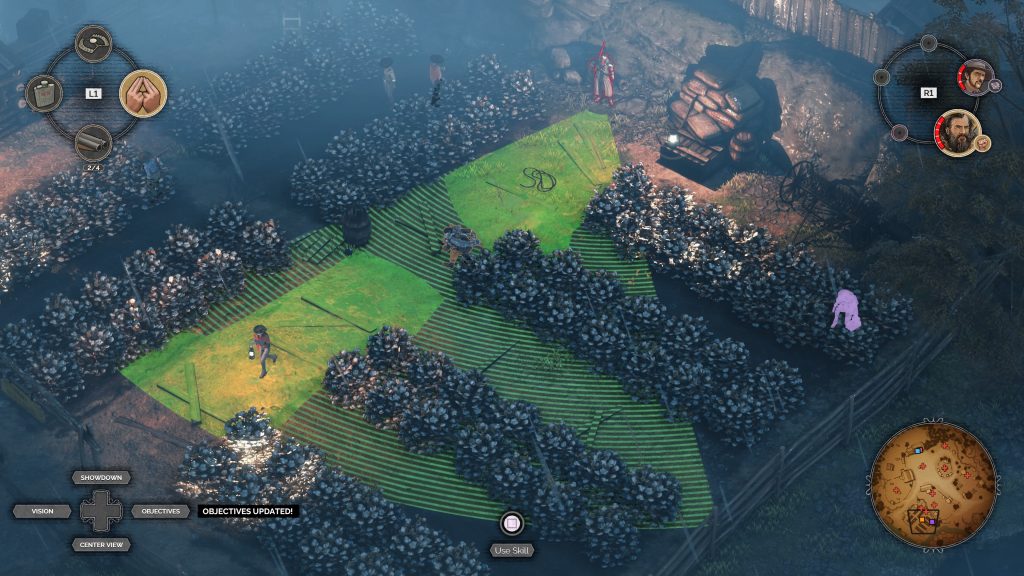 It does take some thumb gymnastics at times to do everything you want. There is a Showdown mode which lets you preprogram what you want to happen before activating it at the appropriate time which does pause the game on lower difficulties but other times I found myself pressing the

to change characters, using an ability (either

if you have to aim it), changing the selected ability with

, using that, walking over to and tying up an unconscious enemy before carrying them into a bush to hide them and switching to another character again to do the same. The interact button is context sensitive too so you have to be careful if you’re trying to tie someone up and the body is next to a ladder, for example.

Still you have plenty of time to get used to this over the course of the game with each level taking up to an hour for me. You’re encouraged to quick save often by pressing the touchpad and reloading these quick saves is very quick, though the initial load for a level is a little over long, so you’re not punished for experimenting which does lead to a lot of trial and error but also helps you to learn what works and what doesn’t. Each level has a bunch of challenges to try and tackle including beating the stage on Hard, killing a certain amount of enemies with the environment, not saving, as well as more unique stuff but each has a time trial challenge as well with a time limit far lower than I ever managed on my first time through.

As well as being a decent length game anyway the levels are designed to be played over and over to complete the challenges and get your time down. You even unlock the ability to replay stages with certain stipulations to really challenge yourself and there are more of those on the way post launch. Much like Shadow Tactics there’s plenty of content here . 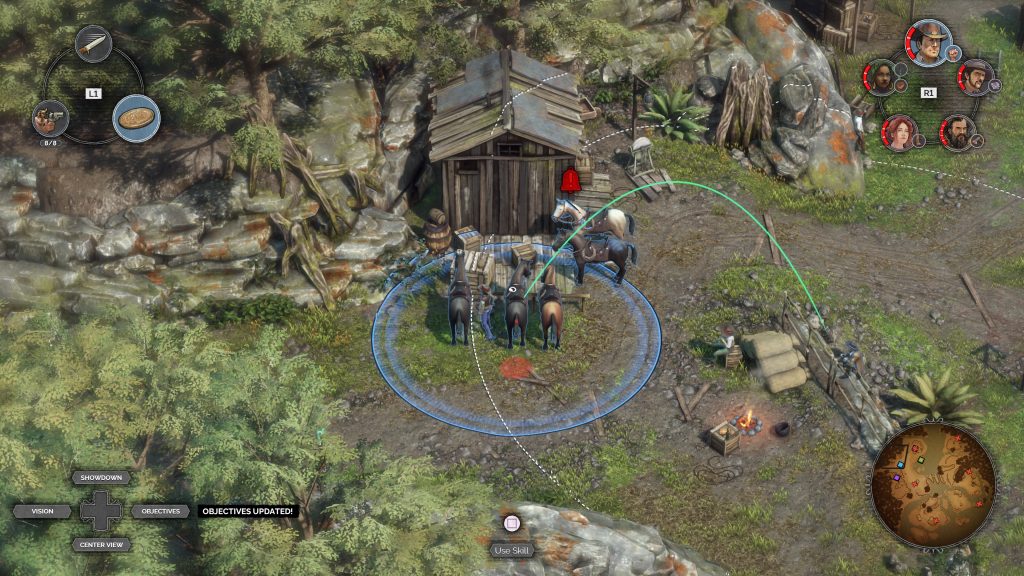 Basically if you’re a fan of Shadow Tactics: Blades of the Shogun then apart from the cowboy theme this is very much the same type of game but if it ain’t broke as they say. You’ve got to get a decent amount into the game before you gain access to Isabelle with her unique abilities so some may find it a little too over familiar but again I’ve had a lot of fun sneaking my way through levels and learning new ways to distract and dispose of guards. There’s plenty of game here with a lot of replayability on top of the finely crafted gameplay. Fans of stealth and tactics shouldn’t let this game sneak by.

Desperados III
9 Overall
Pros
+ Excellent tactical stealth gameplay
+ Lots of replayability
+ Isabelle's abilities are a lot of fun
+ Quick save is a godsend
Cons
- Very similar to Shadow Tactics
- Some controller gymnastics required
- Trial and error gameplay might annoy some
Summary
Desperados III is very similar to Shadow Tactics: Blades of the Shogun but that game was so good I don't mind. The new character's abilities are very unique and there is plenty of content and replayability. Fans of stealth and strategy need these games in their lives.