While I generally prefer games where I’m shooting things, there’s something nice about a chilled out game where you get to build things.  From Minecraft to Stardew Valley, those kind of games can be insanely popular and so Spanish dev team Chibig have decided to resurrect Deiland, a farming/survival game that first came out for mobile devices a couple of years ago but has now arrived on PS4.

You play as Arco, a ten year old boy who finds himself alone on a small planet and is tasked with guarding its crystal core.  Being alone you’ll need to acquire food and shelter pretty quickly and a tutorial explains the basics such as how to obtain stone and wood and how to use them to create equipment and buildings.   The planet has one water source and three fields for farming so you’ll need to set up your home there and begin living off the land.

At first you’ll be planting, and chopping down, trees and mining rocks to get precious resources while also sewing seeds for various crops.  These either end up being food or useful commodities such as cotton which ultimately ends up being useful for creating things such as fabric and rope.  Each new item that you discover will tend to be either useful in its own right or as part of something better.  Either way, you’ll need to manage your resources fairly carefully so that you’ve not got an abundance of one thing but then find you’ve got no food. 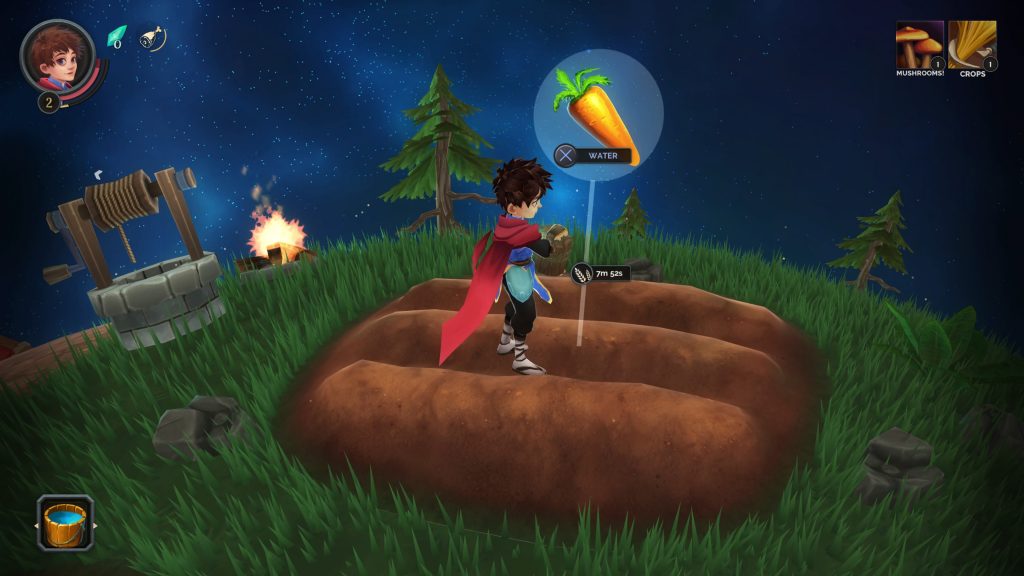 Eventually you’ll meet the first of a series of visitors and will start receiving quests.  These usually involve building or growing something and often end with you gaining a new ‘recipe’ for something else you can craft.  Deiland soon settles into that kind of loop where you are growing the resources you need to complete whatever quest you are on.

Doing anything takes time.  When you plant a seed a timer is activated.  You can speed it up by carrying water over to that field but you may be better off multitasking while tasks are completing themselves.  If you don’t do this, the game can feel a little bit bogged down in these time-based mechanics but eventually you’ll have so much to do that you won’t really care. 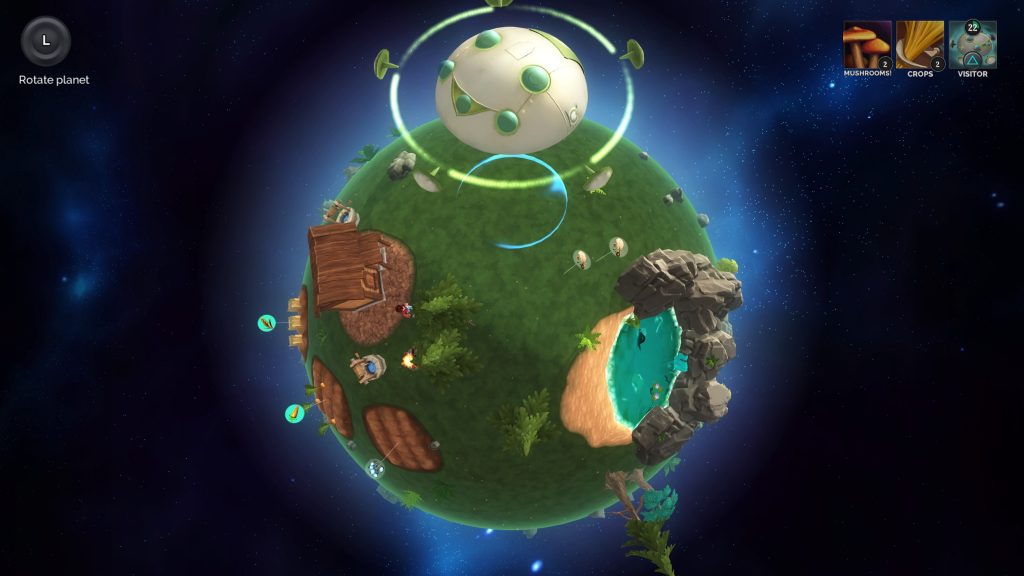 While the game’s tutorial is over pretty quickly, the whole campaign kind of feels like a tutorial with you being drip-fed new crafting recipes as you go along.  So when it ends up being time to make, say, a pizza for someone, the game will tell you there and then how to do it.  As such, the experience can feel a little too guided at times.   Also, because you can’t automate tasks like you could in games like A Kingdom For Keflings, there’s limited scope for designing a really good, efficient base.

Arco’s tranquil existence doesn’t last too long and eventually you’ll be fighting off intruders and worrying about meteors smashing into your planet.  This keeps things interesting but the combat is so simple that really it justs ends up being another way to gather resources.  Sometimes a quest will involve collecting bits of dead enemies (such as the wings off giant bees) which can be annoying if you have to wait days for that enemy to turn up.

Other reviewers, and players, have noted that some quests (and trophies) have glitched out on them.  Coming to this game a few days late, I haven’t noticed these issues but caution is advised on that front.  It would certainly be devastating to the gameplay though as so much of what you have to do here is busywork.  This is one of those games that isn’t trying to excite you and is happy to just have you working for t 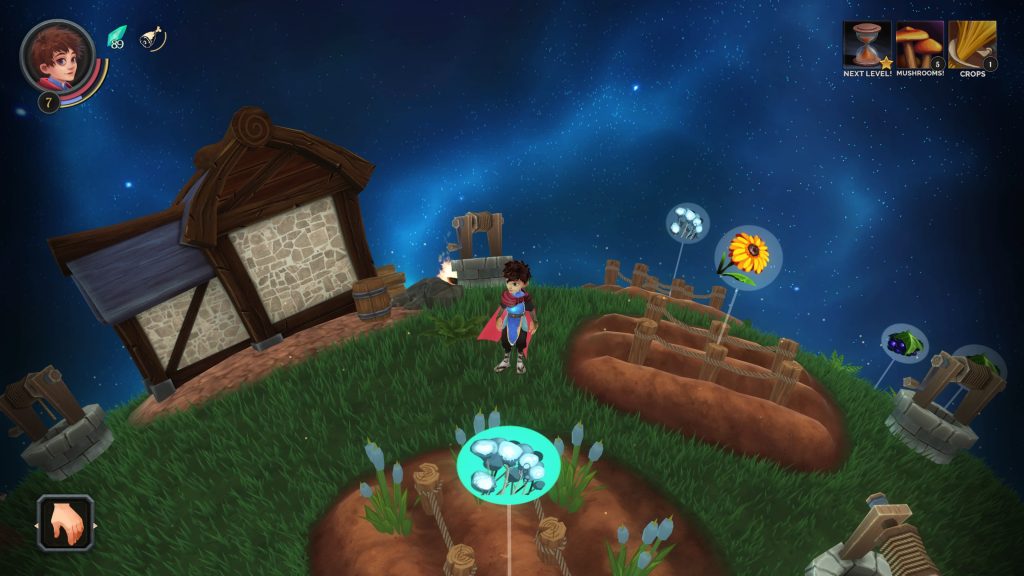 he whole time which may not suit fans of more action-based games.  Of course, the thing with these games is that they can be massive time sinks and generally have you performing fairly mundane tasks for the most part and that’s certainly the case here.

What Deiland does do well is give you a lovely world to exist in.  Your home planet is a tiny sphere, so small that you can circumnavigate it in under a minute.  On foot.  That means you know where everything is all the time and it just makes everything so much simpler than if they’d put it in some ridiculously huge sprawling world.  And it all looks gorgeous.  The game has had an extreme makeover since its days on iOS and Android and this is one of the few recent indie games where they’ve really put an effort in.  Everything is beautiful to look at with lovely deep colours and well-drawn environments.  The size of the planet also allows for some creative ideas such as rotating the world underneath clouds to make sure that the rain lands on your plants or to ensure that falling meteors don’t damage your farm. 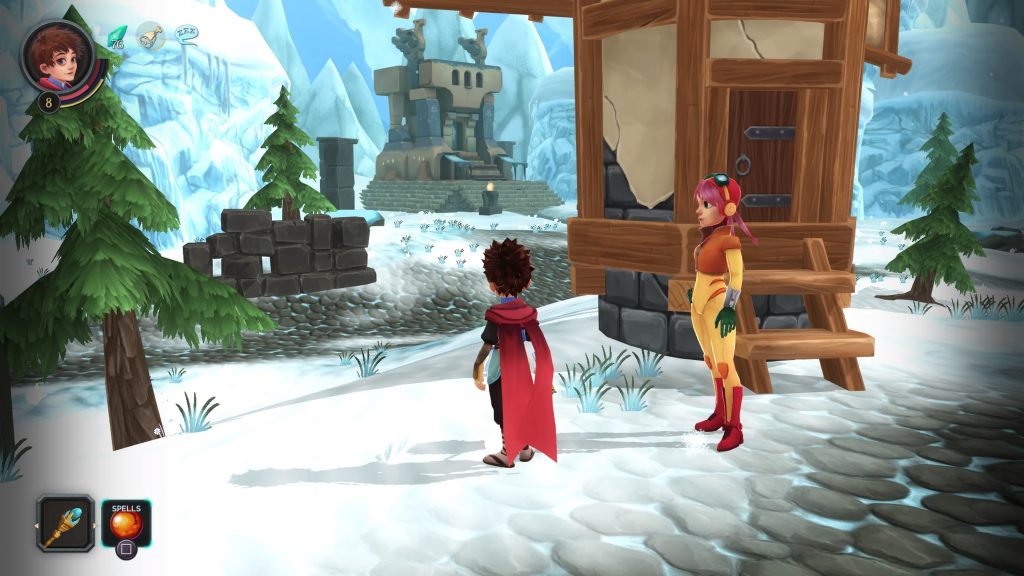 The game is also incredibly easy to pick up, carefully measuring out any additional complexities slowly but surely.  Even when you’re getting bored of it, there’s always something else to do and that makes it hard to put down.  There’s also an underlying story that drives the game on which gives everything a point unlike other games in the genre.

It seems that creating slow-paced games where all you are doing is working has become fairly mainstream these days and while I’d rather be playing something with explosions in it, Deiland‘s hooks are well and truly in.  That may be more down to the presentation than the gameplay but whatever it is, I just put in three hours straight on it today, having already put a load of time in previously.  I’m not sure I achieved much, or even had that much fun, but I don’t regret it and as soon as I hit the ‘publish’ button on this review I’m going right back in.

Deiland
7 Overall
Pros
+ Enjoyably relaxed
+ Addictive
+ Beautifully presented
Cons
- Some technical issues reported
- A huge timesink
- Not exactly exciting
Summary
Deiland is a charming farming game that somehow gets away its lack of action and excitement by lulling you into a state of total relaxation.