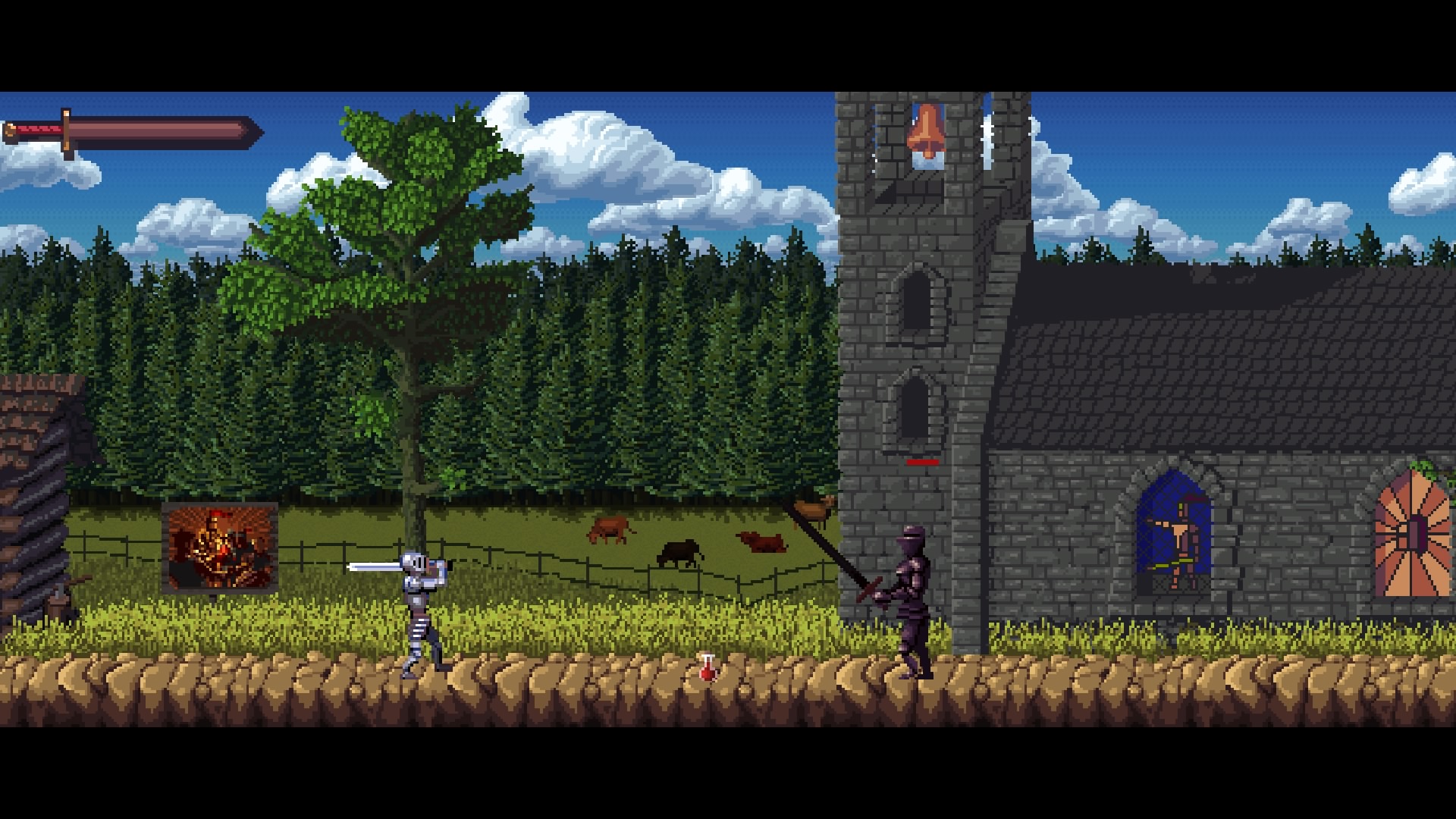 A Bastard’s Tale is the type of game people will describe as a 2D Dark Souls. You know, that lazy shortcut which basically means a game is difficult. It’s a massive disservice to a great game. Dark Souls I mean, not this.

A Bastard’s Tale has been out for over a year on PC and has been tweaked and updated over time as is often the case and that’s the version we get on PS4. 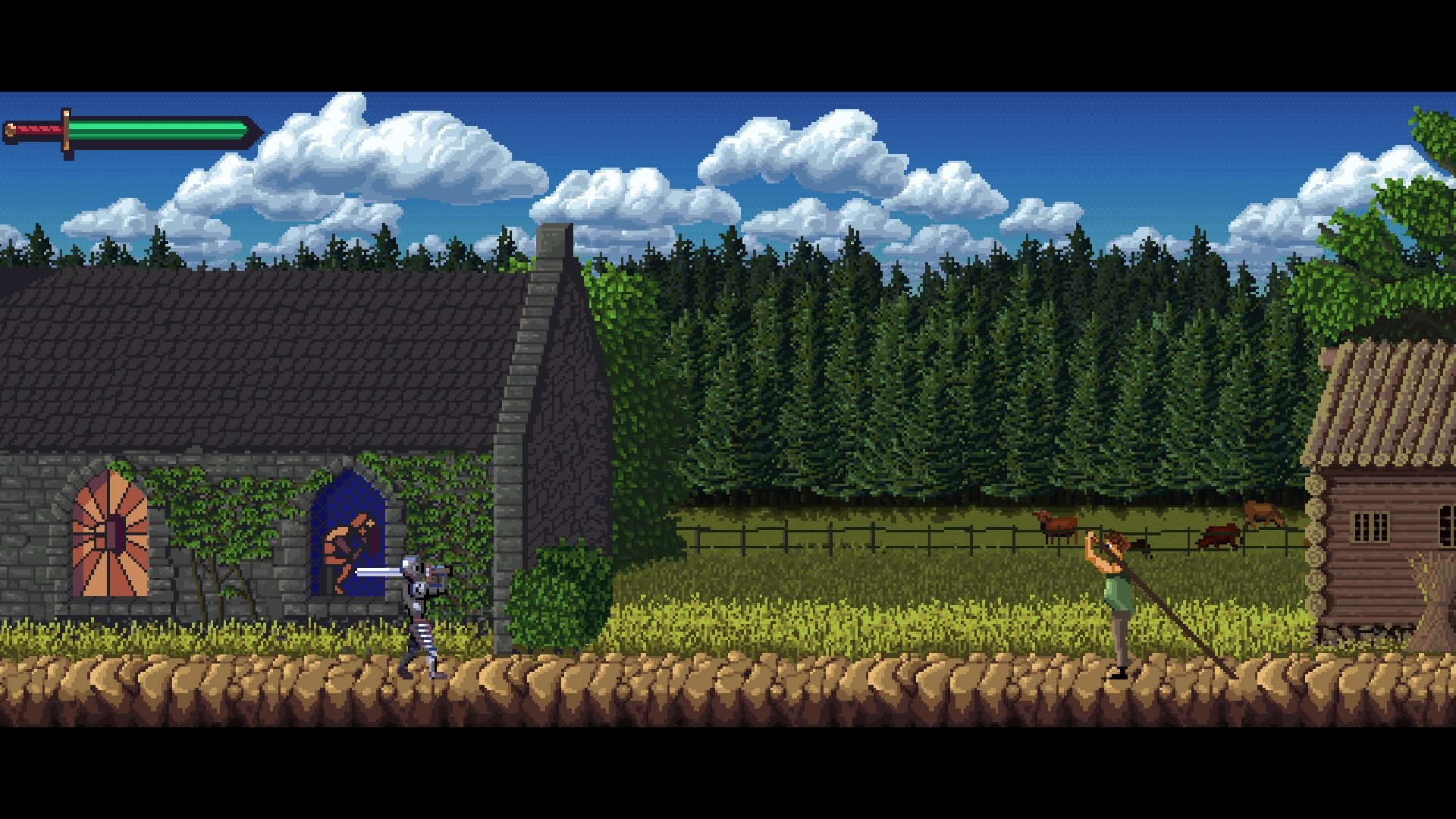 The game sets you as a person in armour walking from left to right across the land killing everything in his/her path. I assume they’re the bastard of the title, but beyond that there is no real story. You’ll get an image at the end of each level showing you celebrating with townsfolk or whatever but there’s no reason given for doing so, which is fine. Not every game needs a story.

Your bastard is clad in typical knight’s armour with only a sword for both attack and defence. As stated earlier you’ll walk from left to right and you’ll encounter one enemy at a time. To start with they’re peasants (I’m not sure why you’re attacking these poor folk but whatever) but move on to other knights and more mythical beasts later on.

You can swing your sword in three directions, with square swinging from left to right, circle from right to left and triangle being an overhead. The enemies have the same attacks and to counter this you can use your sword to block in each of these directions by holding R2 and pressing the appropriate button. You can also dodge roll backwards by pressing cross and pushing left on the left analogue stick (you can’t use the d-pad in this completely 2D game for some reason, not even on the menus).

The game does a good job of teaching you the basics in the first level with the first person you encounter using a large stick and obviously winding up his attacks to allow you to block them before offing him in one hit. Then it introduces some charging bulls which you learn you can’t block and must merely time your swings to hit them before they hit you. You can take multiple hits before dying and you get a potion part way through the level to restore your health with L2 if you need it but you’ll probably die pretty quickly and learn for next time as you have to start the level over if you die. 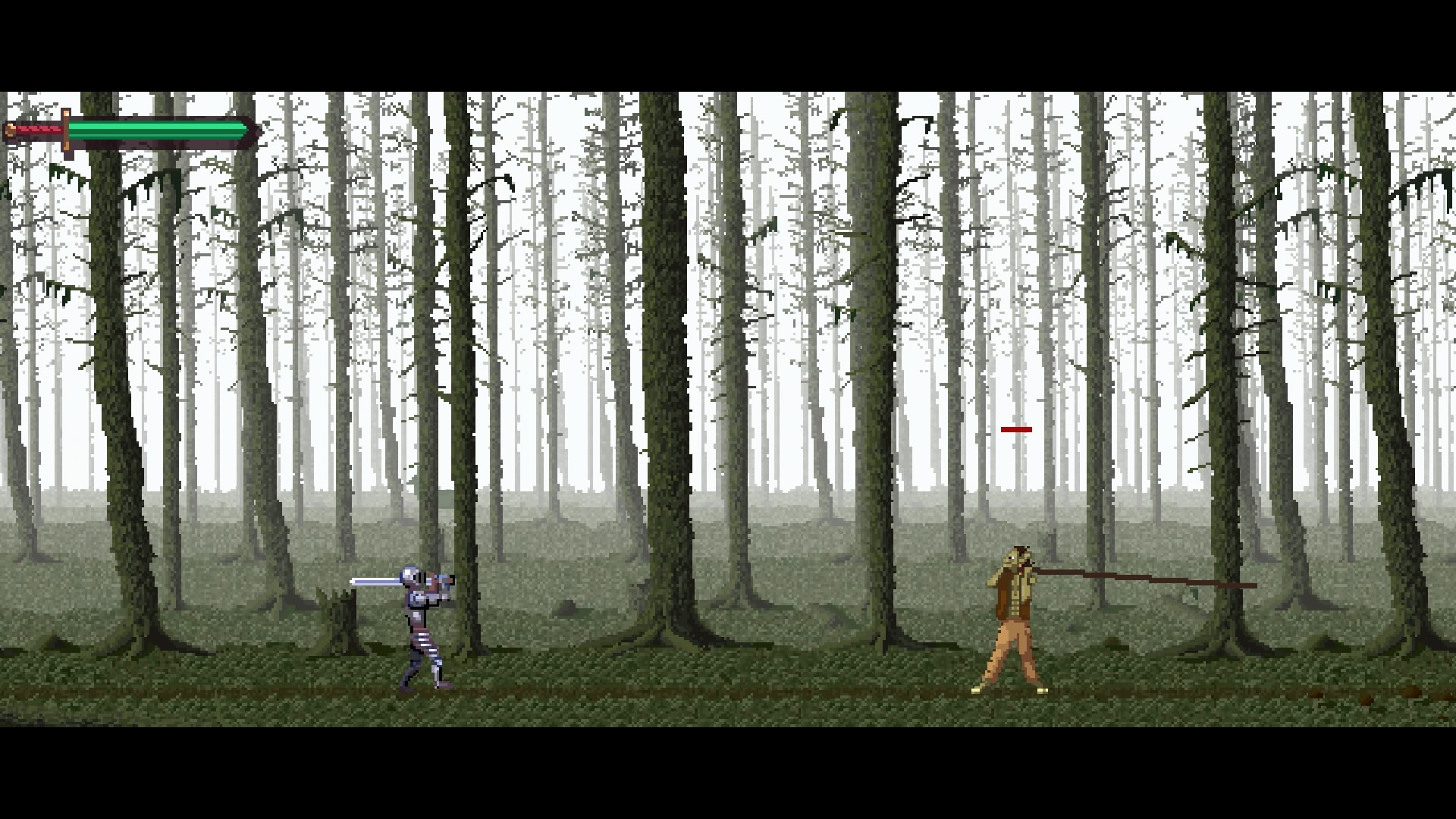 This might sound bad but there are only about five enemies in each level so it’s not like you lose loads of progress, though the walking speed of your character means it does take a while to get from one fight to the next. I liked the plodding nature of the bastard at first due to it feeling like s/he is quite determined and yet these fights ain’t no thang but after multiple deaths you do just want to get on with it.

You’ll get through the first level in reasonably quick time, facing off against a knight who you have to block before getting your attack in multiple times before he succumbs. Then you’ll start the next level which still has you in the countryside but you’ll be facing off against what looks like an infantry soldier. He will fuck you up. His sword swings are faster than yours, his reach is better and he can block just the same as you. Get past him and you’ll be charged at by a spearman on horseback which you deal with in the same way as the charging bulls on the previous level but you must hit their spear rather than them or the horse.

Then you’ll encounter a spearman on foot. He will fuck you up. This time it’s because he’s more of a puzzle than just requiring to be skilled at the combat. You’ll have to hit his spear away before he can attack you and then get in and attack yourself. Then more men on horseback before encountering another infantryman but this time he has a shield. This means he can block in two directions or simply block in one direction and attack at the same time, again with more speed and reach than you. He will fuck you up.

Manage to defeat him and you’ll face off against another knight who blocks every attack so you must just block him until he goes off balance (or perhaps it’s a well timed block, it was never clear) and then get an attack in. Basically what I’m trying to say is that you’ll have to die to learn this game, there’s not really much chance of just being naturally good at the game and getting through stuff first time. The game keeps track of your deaths and the first level I finished with three deaths, by the time I’d finished the second level I was around fifty.

I actually learned that engaging in the blocking with a lot of enemies was a waste and I just had to time my swings as they walked towards me. There are some you have to block but these tend to be a little more obvious with their swings, at least until the third level. 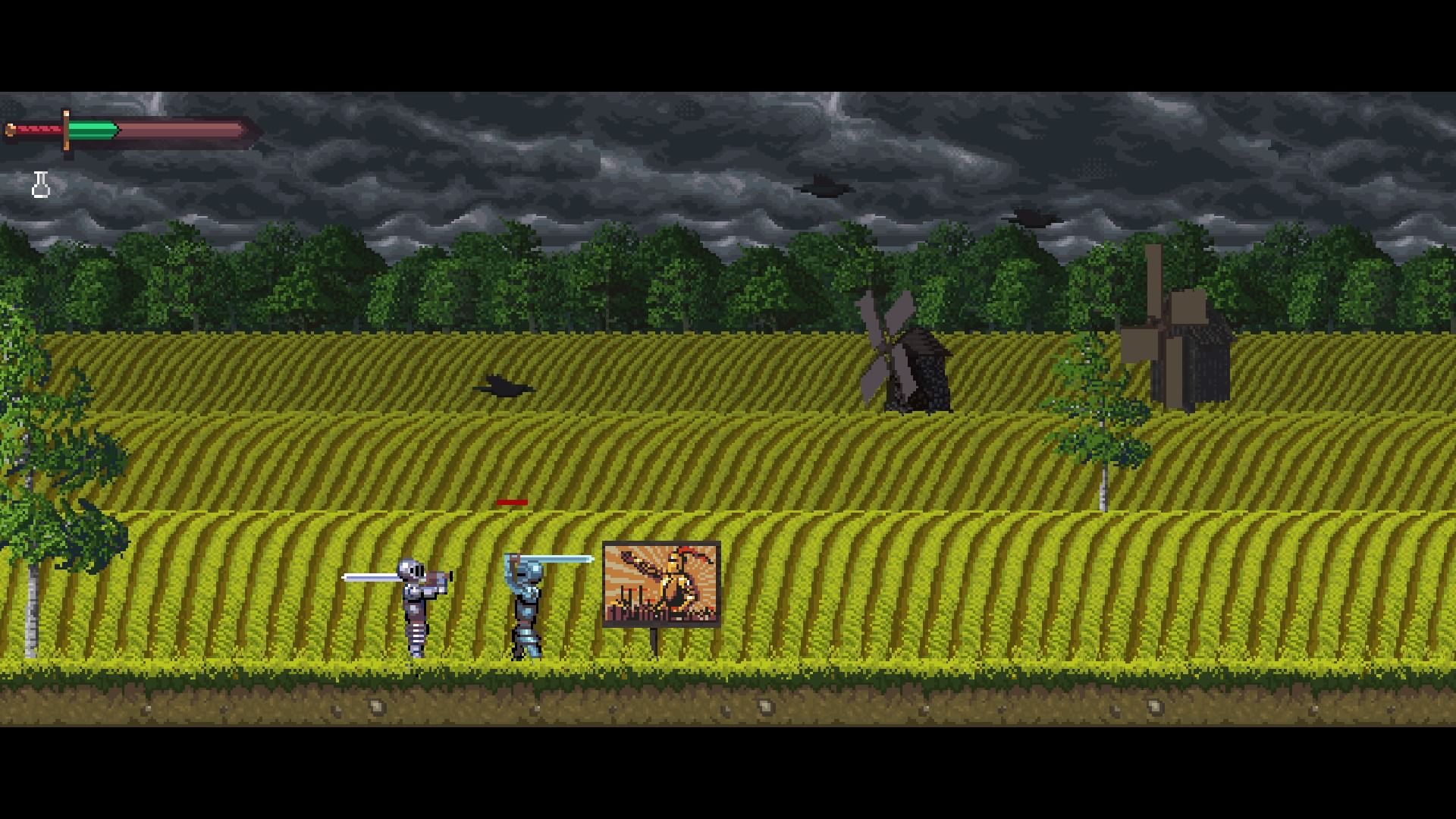 Now I’m going to be honest here, I’ve not beaten the fourth level, the third one was a massive chore. I’m normally one for a challenge and I would never dream of reviewing a game before getting a firm grasp of it but here’s the thing, there are only five levels in A Bastard’s Tale. That’s really not much content at all but then I think there’ll be plenty who won’t even see all that. Currently on True Trophies four people have played the game and I am the only one with the trophy for completing the second level. Who knows how many people have played it and not popped a single trophy yet.

The problem with the third level comes at what I thought for the longest time was the end. You’ll encounter all new enemies in this level, the first being a sorcerer who conjures blades made of feathers out of the air to throw at you which you must swipe away as you slowly approach him, a guy with a bo staff which he attacks with twice in a row and then a giant crow with swords for arms.

The crow is shit. For a while I didn’t think you could damage him and had to wait for him to open up like the knight on the previous level, but turns out you simply can’t attack him with an over head. Having to fight through the previous three enemies every time to get here to try new stuff was not fun. Then there’s the difficulty of finding an opening. Blocking an attack and then going in is the obvious thing but it’s very difficult to see which attack it’s doing. The over head is obvious but the graphics aren’t clear enough to distinguish between an attack with its left arm or an attack from its right.

I eventually did defeat the crow by being overly cautious and there were two more enemies afterwards! Another guy with a staff and then the sword and shield guy from the previous level but with more health. Needless to say I had to defeat the crow a couple more times before I managed to finish the level. 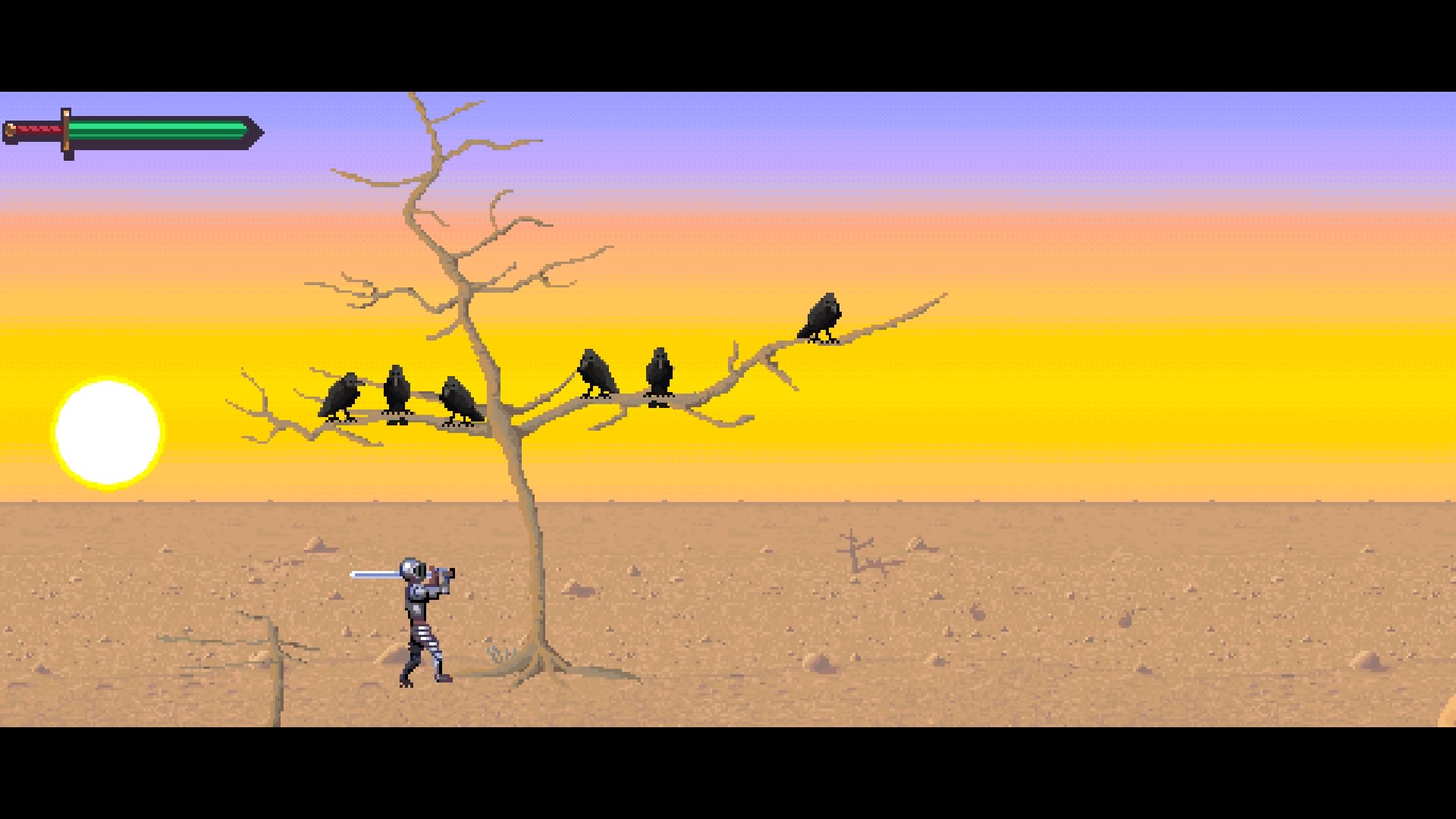 But the thing is I did finish the level. I actually started writing this review before I had finished the third level but then I went back to it and did manage it. After finishing this review I’ll probably try to finish the fourth level (currently stuck on some wolf with sword arms), then the fifth. After that there is a NG and NG+ (the first playthrough is usually NG but not here apparently) as well as a survival mode where you just have to defeat as many enemies as you can.

Visually, other than certain enemies being difficult to read, A Bastard’s Tale is actually a nice looking game. It goes for the retro look that everything else does these days but the backgrounds have a lot of parallax scrolling that looks great though some look better than others. The same goes for the characters, some enemies look really nice with smooth animation whilst others are a bit ugly. The music is largely forgettable.

A Bastard’s Tale prides itself on being tough and old school, with no levelling up or better gear to equip or anything like that. It’s just you and the controls. The thing is the majority of the game is trial and error, you’re not going to master the controls and blaze through the game, you’re going to have to die on each enemy to learn their attacks and this can be a slow process.

Simply walking from left to right takes ages, then you’ve got to defeat the enemies you’ve already mastered to get to the part where you’ll probably die again. Luckily the levels aren’t too long that this becomes a massive chore but then there aren’t a whole lot of levels either so you’re stuck in this position where there’s not much in the way of content and yet it will probably take you a while to see it all anyway, if you even manage it at all. 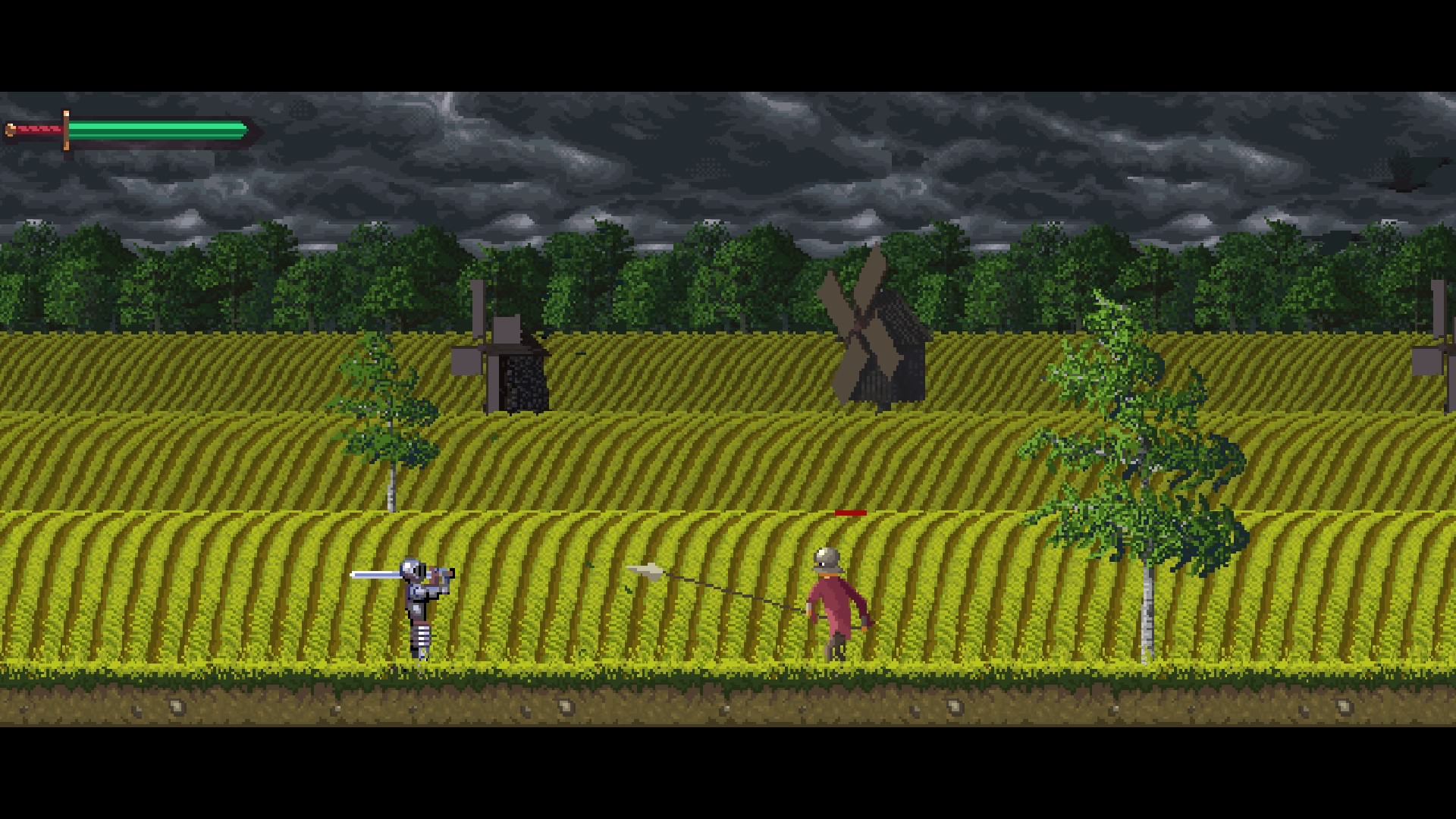 It’s not a game I can really recommend. It’ll find its niche with people who will happily bang their heads against it until they manage to best it but the majority will find the gameplay repetitive and needlessly difficult. The main component of blocking which looked awesome in the trailers is actually my least favourite part of the game, feeling like it’s as much luck based as it is skill, where as the more ‘puzzley’ enemies are fun to figure out. At only £5 it’s a cheap game and it can feel rewarding when you do beat a previously insurmountable enemy and it has that one more go factor that’ll keep you playing longer than expected. Consider with caution.

A Bastard's Tale
5 Overall
Pros
+ Nice 2D visuals
+ Rewarding when you do succeed
+ One more go factor
Cons
- Can be difficult to see enemy's attacks
- Only five levels
- Repetitive gameplay
Summary
A Bastard's Tale prides itself on being tough and that's certainly what it is. It's also repetitive but rewarding. The feeling of just one more go will get you through it eventually but the trial and error gameplay will test your last nerve.

One thought on “A Bastard’s Tale – PS4 Review”