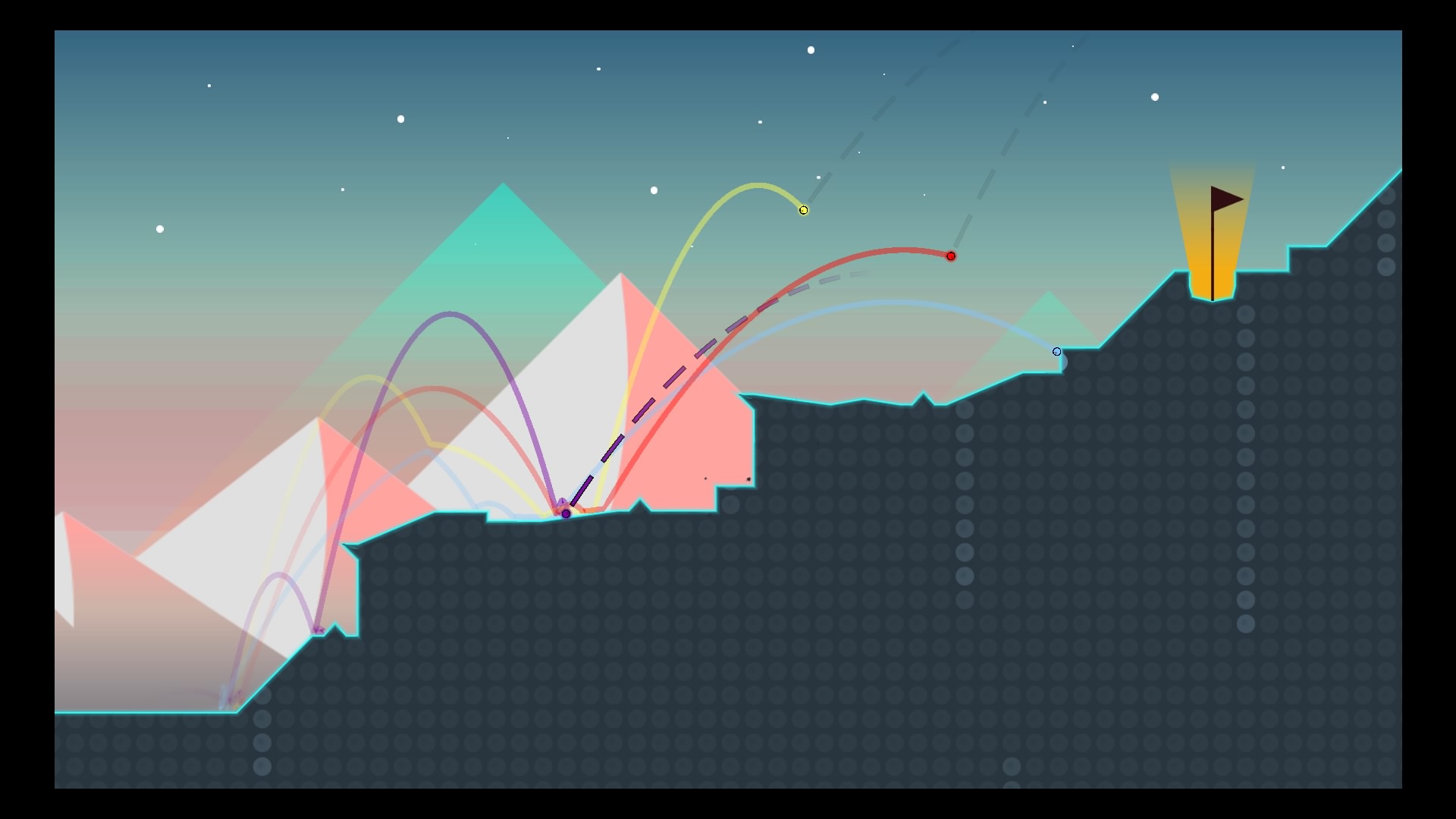 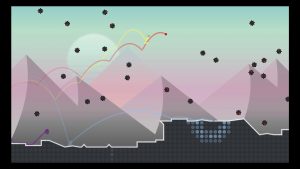 Back at the start of this generation of mobile gaming (the early iOS days), one of the classic archetypes (along with tower defence games, match three puzzlers and platform games with unworkable touch controls) was 2D golf.  You’d pick your shot angle and your power and would hope to get the ball in the hole at the end of increasingly complex landscapes.  Nobody really cared enough to remember the names of these games (well, I didn’t) but Party Golf‘s developers Giant Margarita must have been fans as that is what this game is.

But before you write the game off entirely, note the ‘Party’ part of the title.  This game is all about the competition between friends sat on a couch.  As ever, you pick your direction and hope you bounce or roll into the hole but now the gameplay has a bunch of different modes to experiment and play with and that is where things get interesting.

Typically the default game involves four or eight players (a mix of AI and humans) all playing at the same time (two players per controller for games with more than four human players).  You usually start on the left with the hole on the right of the screen (either higher, lower or level with you) and there will be peaks and troughs along the way.  The race to the hole will see players messing up easy shots or getting stuck in tricky parts of the scenary while fleeting moments on glory are constantly waiting to be claimed by players skillful, and lucky, enough to make a hole in one. 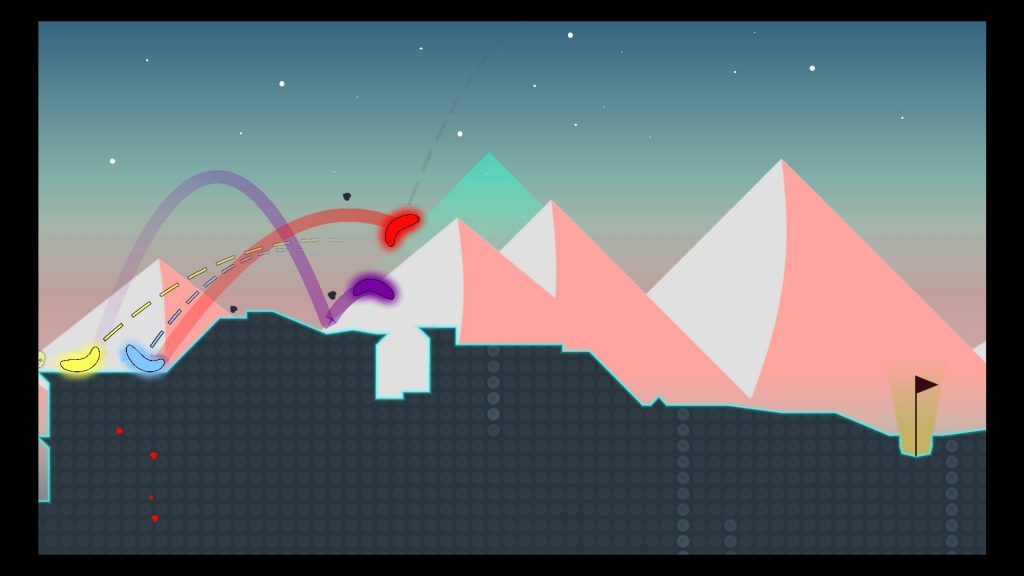 The core game is basic but fun and fits well, for better or worse, with the basic 2D visuals.  If the game stopped there, that wouldn’t be enough to recommend it but Party Golf is fully loaded with variations and options.  These come in various flavours such as the end conditions for a match (first to the whole is the default but there are modes that require you to take the longest path to the hole or require you to take the least amount of shots), the type of courses (king of the hill maps where you have to reach a peak or courses that scroll on for multiple screens), different golf ball types (and by different I mean you can play with bricks and er… fruits) and power up availability.

The power ups are the best thing in the game.  From forcefields that bounce other players’ golf balls away, the ability to jump in mid-air (a’la Flappy Bird) and aftertouch.  All together the game has 100 modes and while many of these are pointless, many of them will be party game favourites for many players.  It’s just up to you and your mates to figure out which modes are best and that’s part of the fun of the whole package. 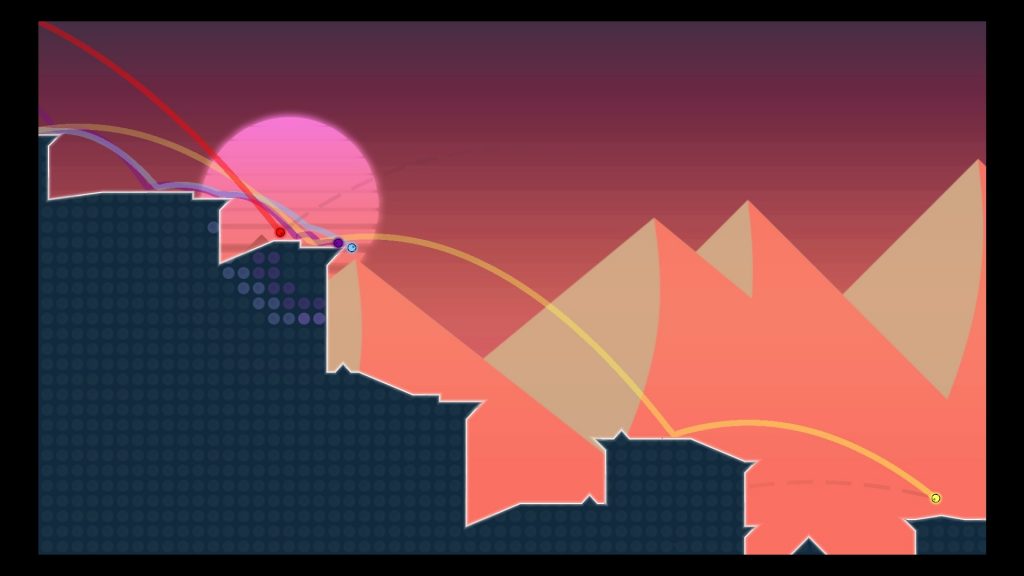 There isn’t much else to tell you about Party Golf in terms of game mechanics.  Just know that it’s a simple game but very playable.  It rewards skill for sure but it is kind of a free for all much of time and that’s all good.  Sometimes the game modes don’t really work with certain levels.  There are levels where getting to the hole is impossible.  There are other levels where some players get an easier route to the hole.  It doesn’t happen often and ultimately it doesn’t much matter but it does hurt the overall quality of the game a little.  Also, in modes involving power ups, the AI seems to be unable to use them and so is often reduced to makeweights for those rounds. 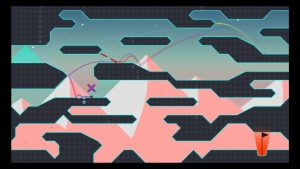 If you can stomach the basic gameplay, and even more simple presentation, there’s a lot of fun to be had here and the chaos can be further enhanced by the game’s Twitch integration which allows viewers to mess with the players too by entering commands to adversely affect individual players.  There is maybe a point where too much insanity is a bad thing but groups of players will naturally find their level.

The game could, and should, support internet play which would make this an excellent online multiplayer title and that’s a sad and unnecessary omission and the game pretty much has no value when you don’t have people around at your place but fire this up next time you have a bunch of geeks over and they’ll enjoy it for sure.

Party Golf
7 Overall
Pros
+ Excellent fun with friends + Lots of variation on the basic theme
Cons
- No real use in single player - No online play - Very basic presentation
Summary
Party Golf's basic gameplay and presentation may not look like much but give the game a chance and there's a brilliant little party game here for you to bring out the next time you have friends over. The game doesn't have much to offer for the rest of the time though.