As a series which is all about exploring history Assassin’s Creed has struggled to move with the times. The lacklustre Assassin’s Creed Unity was released buggy and broken and felt very much like the beginning of the end. The corporate machine churned out one final yearly update, based in London, which managed to salvage the series as a whole but it was definitely time for a rest as everything felt a bit too samey. As something between a soft reboot and a prequel Assassin’s Creed Origins has gone further back than ever before in order to tell a new story, and play a new game.

Based round the late Egyptian period Assassin’s Creed Origins tells the story of husband and wife, Bayek and Aya, and their quest for vengeance. You are given control of Bayek who is a Medjay, a protector of the people, think of a something like a sheriff and you won’t be far off. He has all the skills we’ve come to expect from Assassin’s Creed games and is a likeable enough character in himself. Throughout the game you’ll also get to control Aya on a couple of missions, but this is the exception rather than the rule, and done mainly to add variety. 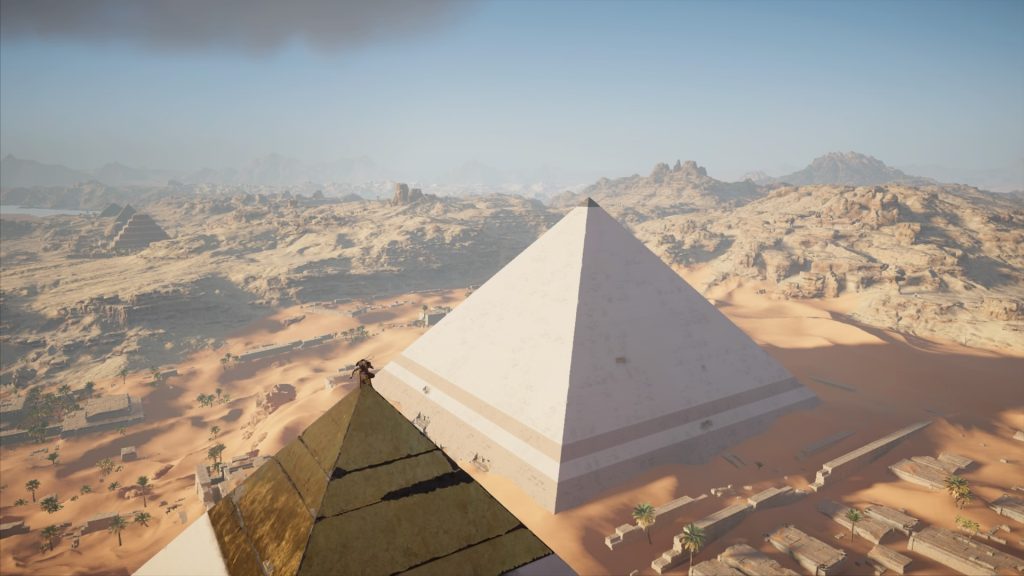 The story of Bayek and his quest for vengeance is fairly interesting, at least at the start, and the characters you have to assassinate all have unique backstories.  This quest for vengeance does get bogged down in the need to grind out experience in the side quests however. Unfortunately all the side quests boil down to either fetch or escort missions and none offer truly memorable scenarios.  There is some variety in how these are implemented but at the end of the day these missions quickly start to drag.  There is an awful lot to do in Assassin’s Creed Origins, almost too much and this breadth of activities does get in the way of story progression somewhat.

For everything that has changed, and there is a lot, this is still an Assassin’s Creed game at heart. By that I mean you’ll be parkouring up buildings, jumping into hay carts and synchronising your view at the top of towers. What is different is how you go about doing these things as the controls have been almost completely re-written. Gone is the use of the shoulder buttons for low and high profile actions and instead climbing is handled with the X button. The shoulder buttons are now used for a fully reworked combat system in what is probably the biggest departure for the series. 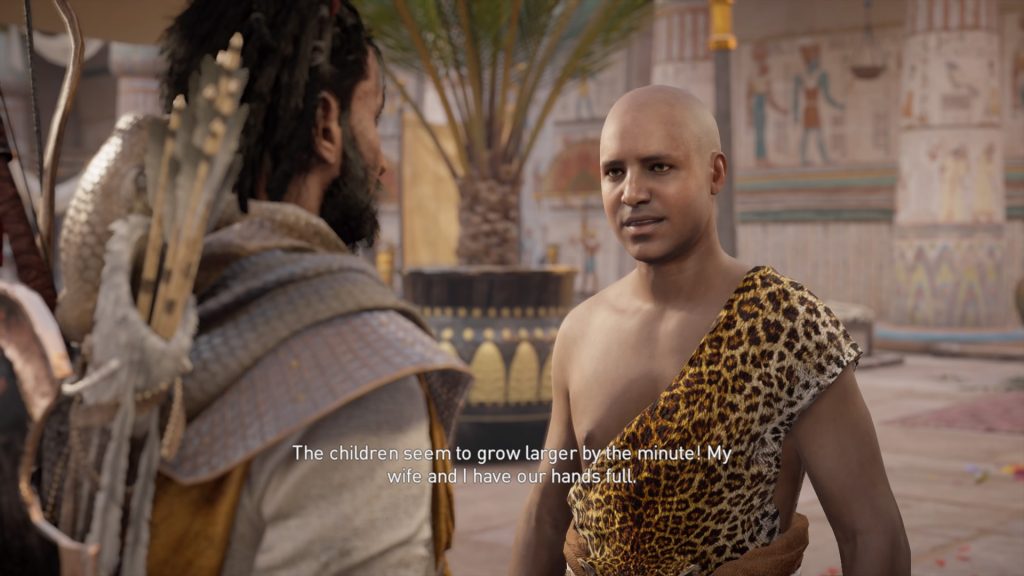 Combat feels like a cross between Dark Souls and Horizon Zero Dawn with your armoury split between a bow and arrows and a sword and shield, both available at all times.  Combat is also weighty with heavy penalty for going up against higher level enemies who will be able to dispatch you in a couple of hits. Whilst the combat is serviceable it does lacks the fluidity of Horizon and the tactical aspects of Dark Souls, you can easily make your way through the entire game by just swinging at everything that moves.

Another change is how Assassin’s Creed Origins has moved wholeheartedly into being an action RPG. With your ever present horse, or camel, and level based quest structure there is are clear elements of The Witcher 3 here.  Every quest has a level recommendation, every item has stats and there is a comprehensive player upgrade tree. These elements work together to produce a game which is constantly rewarding the player in an addicting feedback loop. 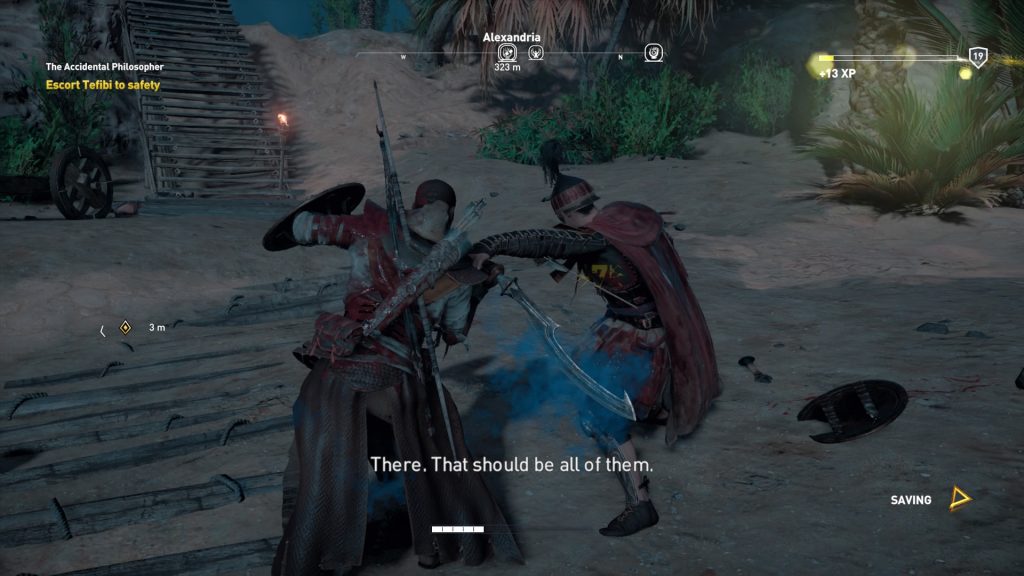 Whilst there are stealth options for most encounters, the forced stealth sections of the other games are largely forgotten here. Restricted areas do make an appearance but you’ll never be harshly penalised for running in sword drawn. This is another small but important improvement, and one which makes the game feel different to play.  This dumbing down of the stealth mechanics may prove divisive for ardent fans of the series, but for me it was a welcome change making the game feel looser and more open to experimentation.

To be expected there is also a looting and crafting in abundance here.  It feels like every enemy drops loot and these are graded along three colour ranks with individual stats for each one. You can also hunt animals to gain crafting material to upgrade your weapons, or breakdown your existing weapons to their component parts.  Whilst you’ll never actually craft new items you can upgrade most of your gear. This is a nice distraction and helped somewhat by your ever present eagle which acts as a feathered drone, tagging and spying on enemy installations. If you think about it too much it gets a bit silly but as a gameplay mechanic it works well. 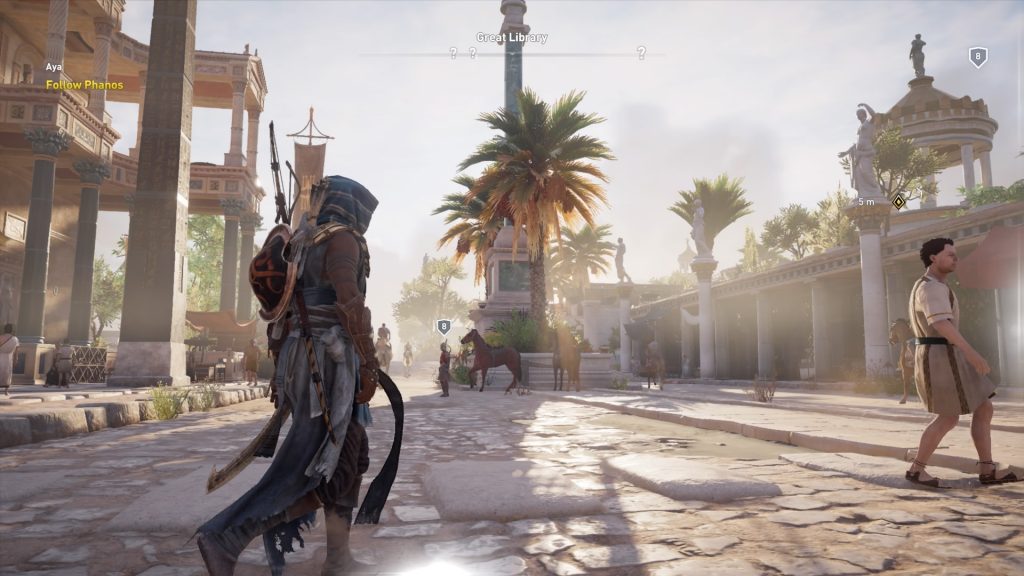 Graphically things impress on the grand scale as the dunes and buildings look authentic and detailed.  The first time I glimpsed the pyramids I had to take a moment to just stop and stare at the majesty of it all. When taking a closer look though, the character models aren’t as detailed and tend to move in fairly robotic ways although there are loads of people knocking around, which could explain this. There is also a bit of open world wonkiness going around too nothing game ruining, like in Assassin’s Creed Unity, but it is there at a low level with horses running over people and carts crashing into each other, stuff like that.

Ive really enjoyed my time here and this is a really enjoyable open world game with loads to do. What is most surprising is how Assassin’s Creed Origins manages to breathe new life into an old franchise in such a successful way. By going back in time it has found a way to reinvent itself and move forward.  The shift to a more action RPG style suits the game well, but the reduced emphasis on stealth may well upset some.

Assassin's Creed Origins
8 Overall
Pros
+ A great fresh start for an old series.
+ The swing to action RPG makes the game feel interesting and enjoyable.
+ Graphically impressive.
+ Lots of distractions to do in the open world.
Cons
- Many of the quests are generic.
- The characters you encounter do walk a little wooden.
- The dumbing down of the stealth may put fans of the series off.
Summary
Assassin’s Creed Origins manages to breathe new life into an old franchise. By going back in time it has found a way to reinvent itself and move forward. The shift to a more action RPG style suits the game well, but the reduced emphasis on stealth may well upset some.