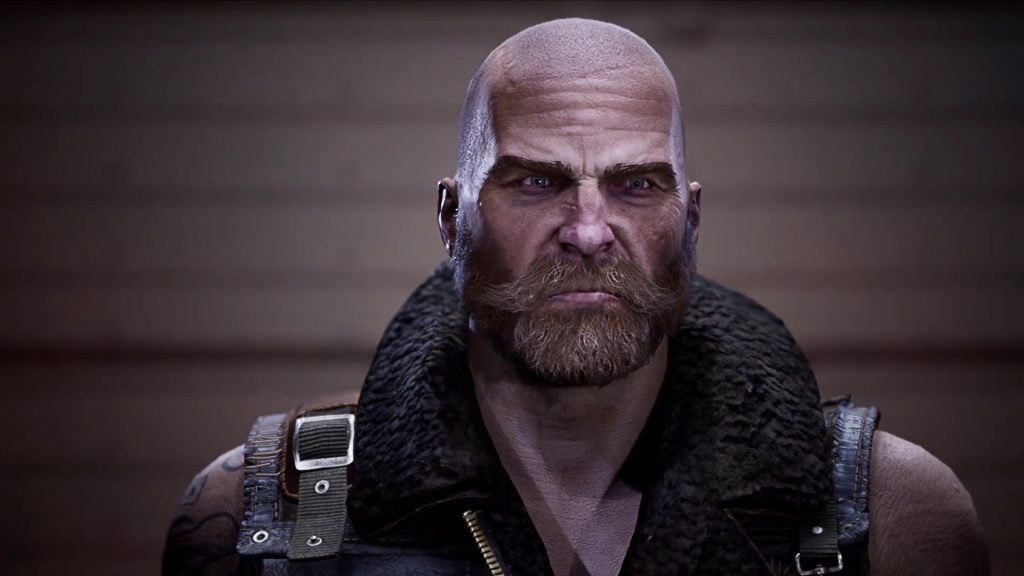 It’s one of those times again where I need to start a review with a confession. For this one, I must admit the heinous sin of not being a tabletop games player. Now, this may not be a concern for some people. I like to think I am not the only one that enjoys Warhammer without having painted a miniature or reads a Dungeons and Dragons meme while having a chuckle with the rest of the group. For me, tabletop games can be enjoyable despite not playing them first-hand.

There are numerous factors why. There is a fair amount of prep work required to getting stuck in with these types of experiences. Miniatures, if needed can be bloody expensive as one example, while tabletop pen/paper RPG’s can be tricky to get started. Especially without the coaching to get around stories and the many rules that fill up the guidebooks. Thankfully, we have video games to plug gaps for those like me, providing an alternative route of entry into expansive lore and the general theme while diluting the experience enough for my ape brain to understand. Of course, in addition to this these add another way for people to enjoy games they already love, but in a different light. 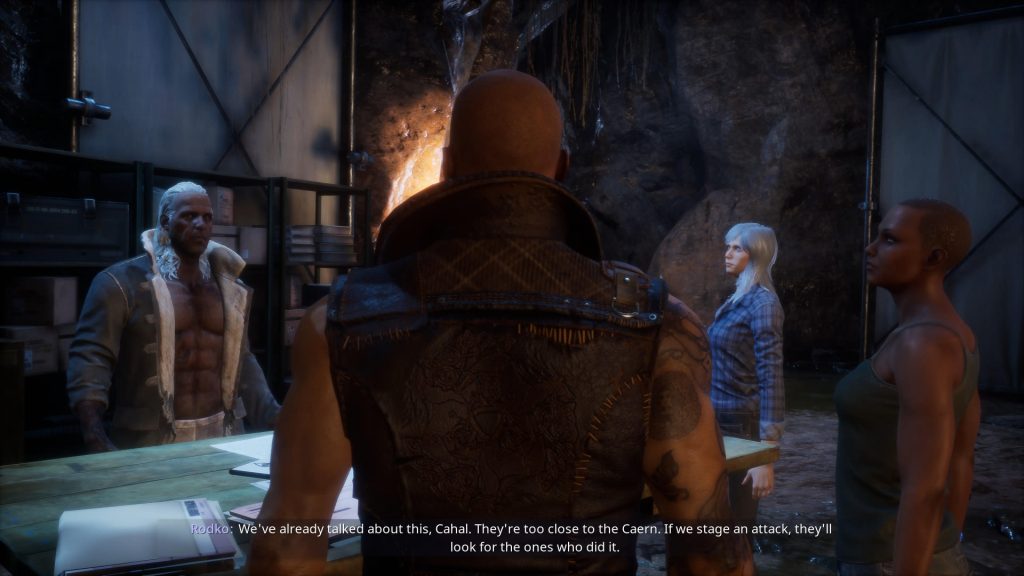 Werewolf: The Apocalypse is one such tabletop RPG. Again, it is not a game I have played first-hand, but after reading into the general world and themes I found myself intrigued. Here we have a very in-depth storyline depicting werewolves who either fight against or join the Wyrm, a cosmic entity that is only interested in destruction and bringing about the titular apocalypse. Reading through it all, there is a surprising amount of depth to the overarching narrative, with various sects of werewolf tribe with different allegiances, some siding with the Wyrm, some actively at war with others and of course, those that take the fight to the Wyrm at all cost.

While my summary is brief and by no means full, I can’t help but feel the burden of trying to get all aspects of the story of Werewolf: The Apocalypse into an eight-ten hour video game, let alone one in the Action-RPG genre where the latter genre elements are mostly baseline for character progression. There is a lot of ground to cover and that makes this an unenviable task to try and get right. 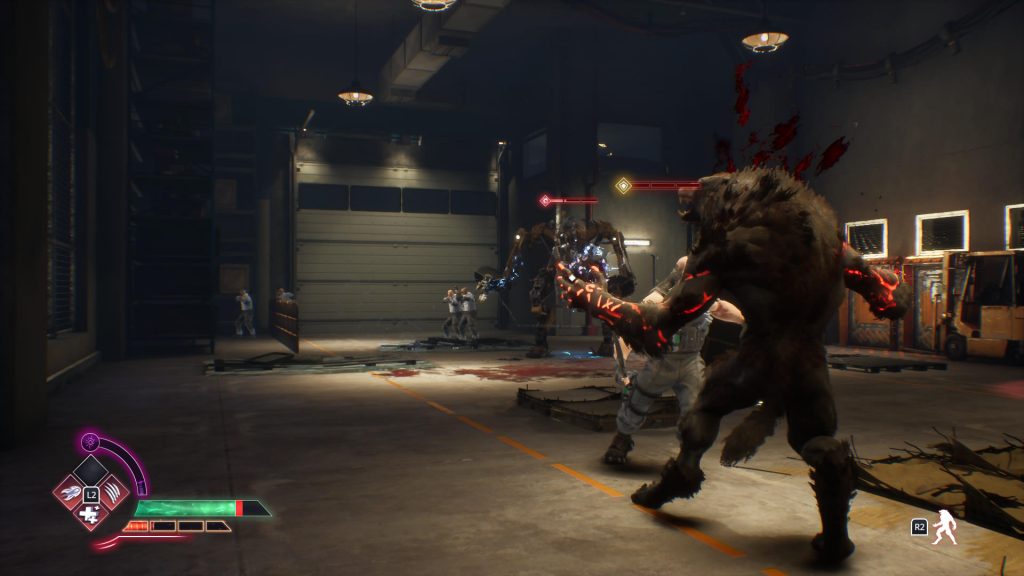 Werewolf: The Apocalypse – Earthblood tells the story of Cahal, a member of a familial pack of werewolves in the American northwest. His Caern seeks to protect the Wyld, the other member of cosmic entities that is the spiritual personification of unbridled creation. By doing so, he works with his pack to take on a corporation known as Pentex, which through its oil subsidiary, is destroying forests and engaging in various misdeeds at the behest of the Wyrm. After a personal tragedy because of a mission gone awry, Cahal leaves the pack to learn how to control his violent rage, only to return a few years later to attempt to redeem himself.

There is an undeniable thread of well-worn tropes in that previous paragraph, it’s not uncommon to a game featuring a gruff protagonist with a focus on redeeming his own troubled past. It’s a good thing then that the overall theme makes for a somewhat engaging change. The werewolves as eco-terrorist angle is an interesting one and leads cleanly into the gameplay where you find yourself skulking around industrial complex’s using your shapeshifting abilities to quietly take out patrolling guards stealthily where possible. This is handled thematically well when you consider the light-footed Lupus (dog like) that is used to quietly move around while ducking low partitions to reach points of interest unseen. However, in practise there is an inconsistency to the stealth mechanics that makes for a somewhat frustrating experience at times. 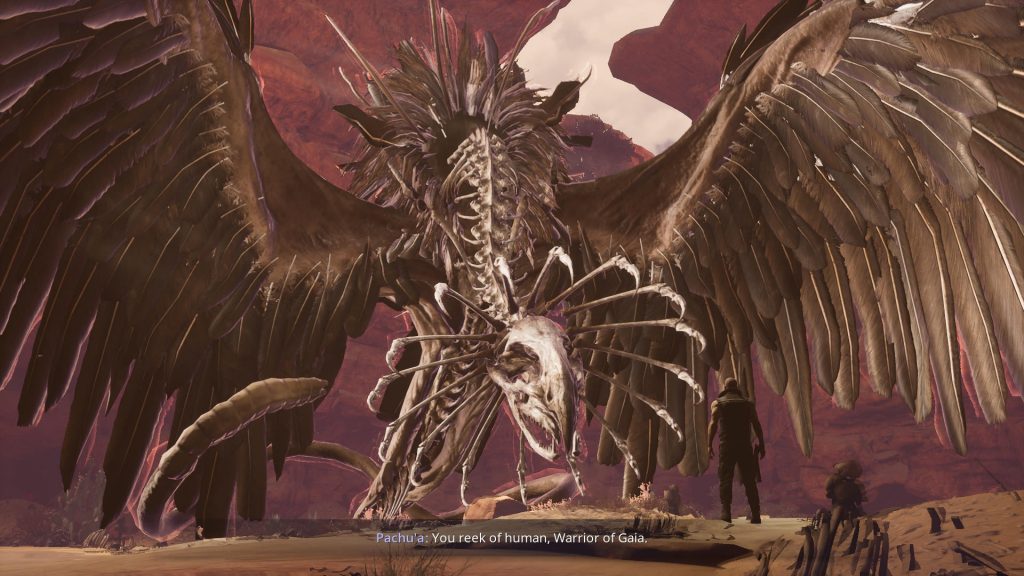 The problem lies in the AI and their sight lines when moving around. There were times while playing that I was seen in circumstances which didn’t make sense, such as when staying still under a low wall, below the sight of an enemy despite being fine under similar circumstances in other moments. On the other paw though, I found myself able to chain together stealth takedowns in full view of goons while I was taking their friends down in succession, resulting in a hilariously placed line of unconscious bodies. Thankfully, there is only one mission in which stealth is truly mandatory, otherwise this would have been a bigger issue. Depending on your preference, this could be a good or bad thing.

The other way to get through missions is to go all-in and shapeshift to Crinos form, which is the full-sized werewolf type that we all know and love. In this form the game becomes a hack and slash title, seeing Cahal rip through opponents with tooth and claw. In Crinos form, Cahal can switch between heavy attacks that slow the movement speed to deliver stronger attacks, or switch to a more agile stance that sees Cahal bound around arenas, closing distances between attackers at a much quicker rate. Fantasy fans will know that very little can take down a rampaging werewolf other than silver or excessive damage and Werewolf: The Apocalypse – Earthblood takes that well known format and rolls with it, which can make playing the game like this a bit too easy when done so exclusively. 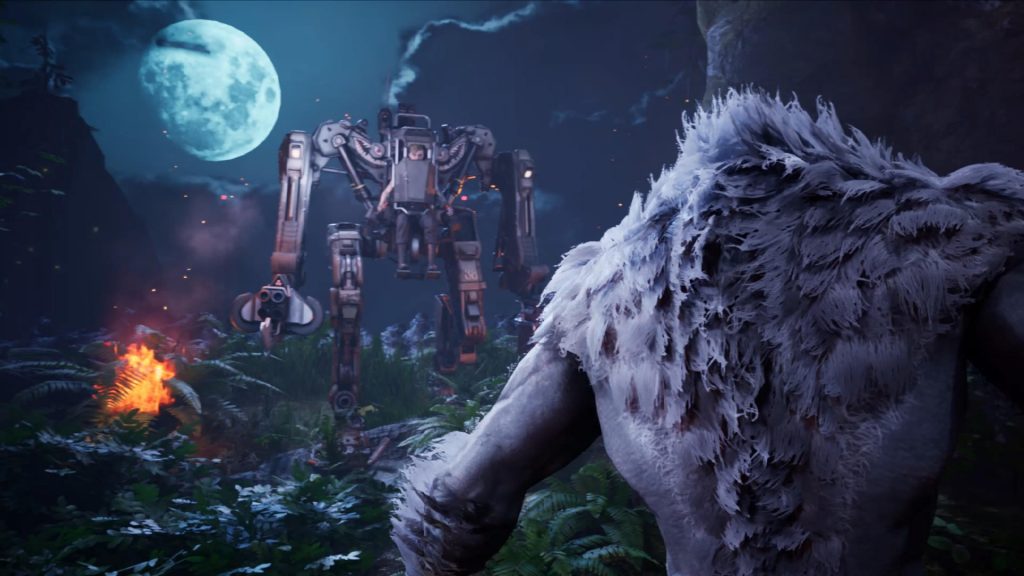 Outside of the mission structures of stealth until caught, are the limited open world sections. Of which there are three main areas which you get to explore. First, the American Northwest, the Nevada desert, and another area that I won’t mention for spoilers. These sections provide a relief from the constant skulking or indiscriminate bloodshed, acting as hubs for character development and the odd side mission. These are a nice change of pace at first, but sadly underutilised. The werewolf home in the Northwest shows a fair amount of potential for deeper lore leanings, particularly with the inclusion of a large spirit that resides there that provides deeper understandings of the story and a great visual, but these sections go by so quickly that they could easily be ignored in favour of the missions for a quick completion.

In general, the world of Werewolf: The Apocalypse feels like it isn’t as explored as it could have been, and this Is with the consideration of the sheer challenge of bringing a world as seemingly large as the tabletop game to a digital format. There is a greater emphasis of various werewolf tribes and their ideals in the notes for the tabletop title, but in the video game, you only ever meet one other tribe and the spirit that accompanies them. To me, this was by far the best moment of the game as it showed a different perspective and motivation for the race beside the eco-warrior angle that I had played for the five hours up to that point. However, this tribe is sadly underutilised with only a footnote resolution to their part of the story. When you consider that most of the story for Werewolf: The Apocalypse revolves around the in-fighting of the various tribes, it feels that this a huge omission, especially as a first introduction to the overarching plot. 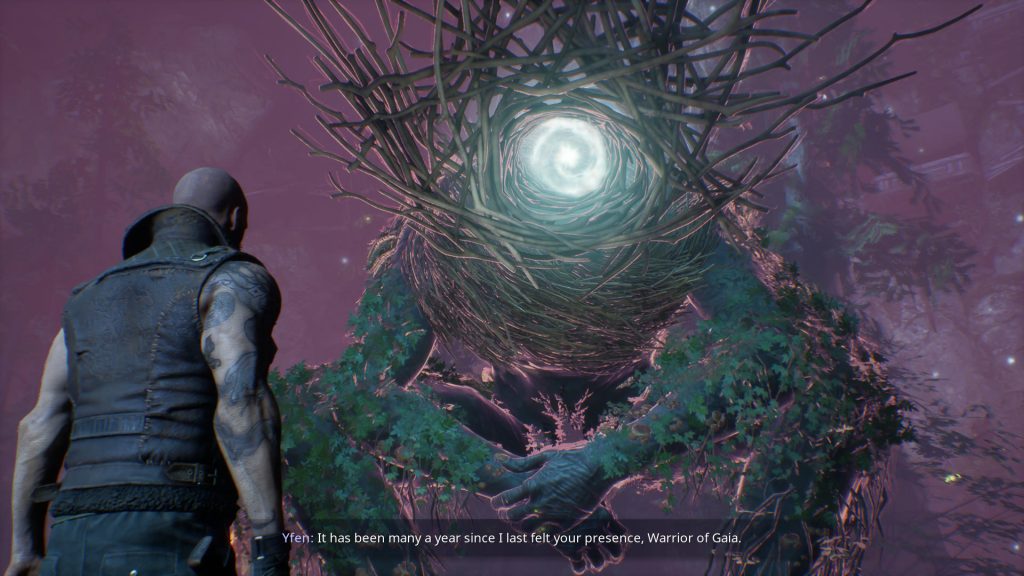 Likewise, the Wyrm is a genuinely interesting enemy that could have been shown more. There is a great cinematic at the beginning of the game which shows the enemies of the werewolf tribe under the influence of the cosmic entity, being mutated beyond typical humans or industrial power-loaders into mutant abominations. This set an expectation for the game early on and while you do end up seeing these things at some point, I feel that to add variation they could have been a bigger part of the game, instead they act merely as souped up versions of the same enemies you fight throughout the ten hours.

So once all is taken into consideration and it’s realised that the gameplay loop revolves around the shaky stealth sections or the admittedly fun-for-a-time hack n slash mechanics, it gets a bit too repetitive, too quickly. A fact that isn’t helped by the equally repetitive soundtrack which repeats a set of themes that represent stealth/attack modes throughout the whole game or the samey in-door locales that are hard to tell apart. It’s a shame then, as while Werewolf: The Apocalypse – Earthblood could have been a great way to get stuck into the world of Garou for the first time, it feels like something that only fans of the tabletop game can fully appreciate as there are so many gaps in story to fill and to do this you would need a pre-existing love for it. 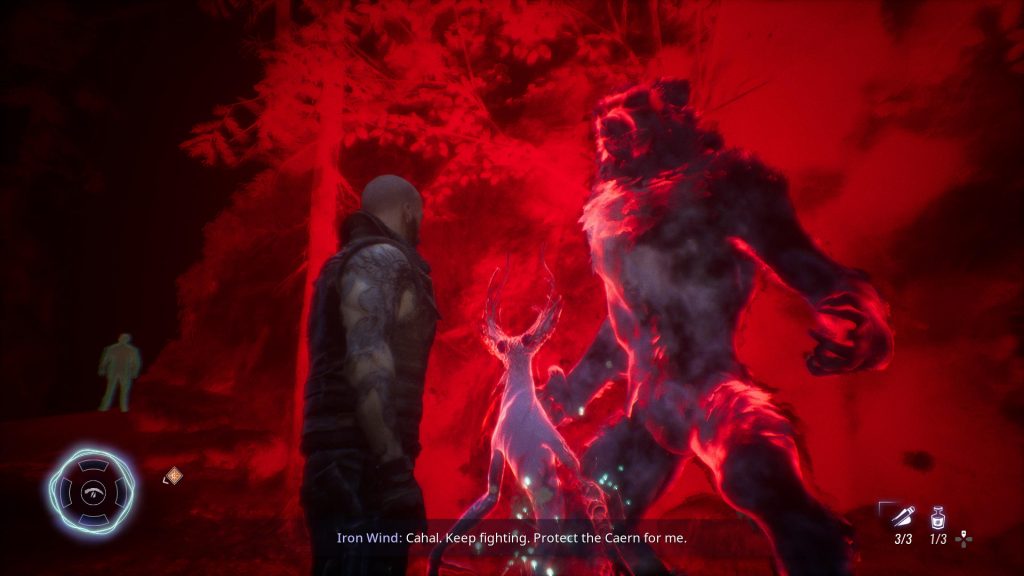 Version reviewed: PS5. Please note that PS4 players may experience differences in the quality of Werewolf: The Apocalypse – Earthblood to those experienced in this review

Werewolf: The Apocalypse - Earthblood
6 Overall
Pros
+ Has moments of brilliance, especially when turning into a werewolf and watching the area explode around your character
+ Some interesting story elements in the form of the spirit world or wolf tribes
+ Fluid in motion, keeps a constant frame rate throughout
Cons
- Visually rough, particularly in the character models such as the antagonist Richard Wadkins
- Doesn’t commit to solid stealth mechanics, very inconsistent
- Repetitive combat, relying on brute force rather than actual strategy in most encounters
- The story doesn't go deep enough considering the overarching lore of the subject matter
Summary
Much like the warring tribes in the board game that this title is based on, the various ideals that make up this game don't quite work together as you would hope they would. Werewolf: The Apocalypse – Earthblood tries valiantly to tell a story while getting you to think and move smart. Ultimately however, the game boils down to a technically proficient, yet repetitive button masher with minimal next gen trimmings and a sense that this game could have been a whole lot more than it is.