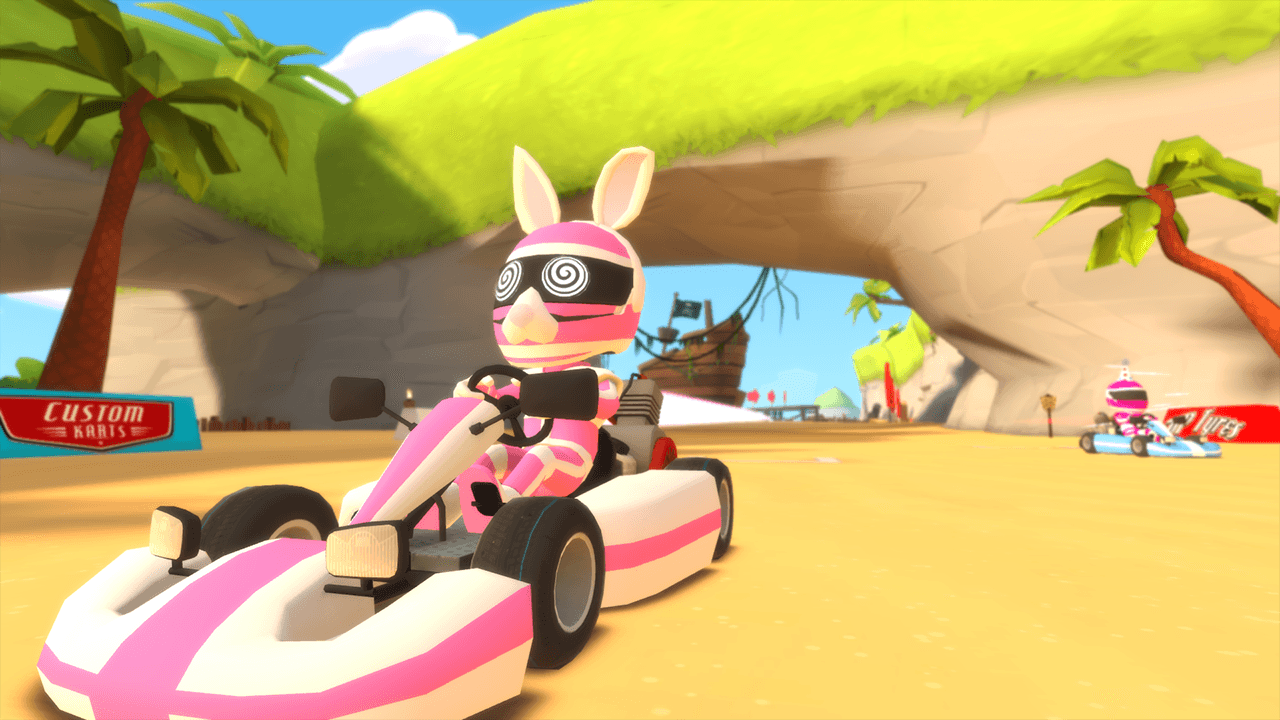 Given that VR games translate better to seated situations (hence the silly number of turret/rail shooters on PSVR), driving games are a relatively easy way to show off the tech while giving you a better, more natural, view of the action.  DriveClub VR and DiRT Rally VR cater for fans who want a more serious simulation but VR Karts, from VR specialists Viewpoint, is your standard kart racer for those of us who may know how to drive a car but have next to no idea how the things actually work.

Taking its cues most obviously from Super Mario Kart, VR Karts offers simple driving larks with just the basic controls – accelerate, brake, boost and steer – and a selection of power ups that allow you to turn a race in your favour.   There’s no gear changing and not even a hand brake.  So don’t expect much in the way of precision here. 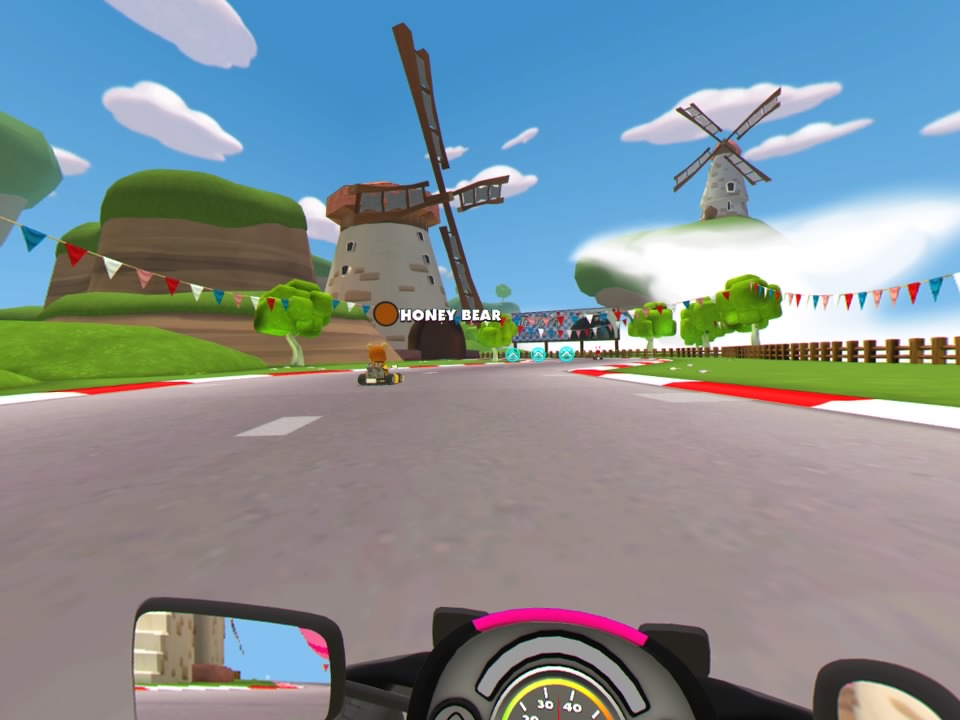 The only real nuance to the controls is that if you corner while boosting, you’ll not lose momentum.  It does allow for you to keep your speed up but there is a cost to it.  Tracks with really tight turns can be a bit of a nightmare to get through and it is very easy to go from an easy first place to last when presented with anything like a narrow ninety degree turn.  You’ll learn that the best way to take these turns is to exercise a little caution going in but we’re used to games with good controls that left you drift so this all feels a little stilted to the point where it really affects any enjoyment you might have otherwise had from the game.

Also, for a game that is trying to match Mario Kart‘s whimsical cartoonishness, and fun, the game really lacks charisma.  The tracks are set it colourful but bland locations such as a beach, a castle and so on but they all feel much the same while the characters you race again really are just names.  There’s no story here, no reason to care.  Which is fair enough in so far as this is an arcade racer but there’s very little to grasp onto here. 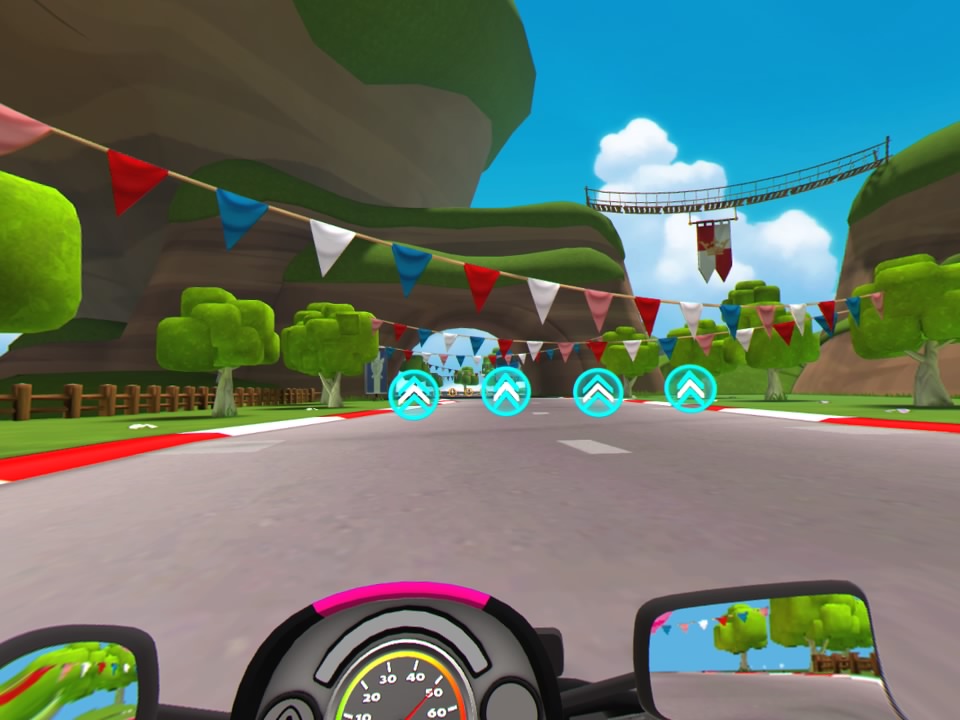 The game offers a tutorial mode, offline championships (a set of four races per championship with four difficulty levels to attempts) and a welcome but entirely unpopulated online mode.  There’s no upgrading, very little customisation and really nothing to get excited about.

The game does offer a set of power ups, as is mandatory for this type of racer, and they aren’t really that well balanced.  The portal power up puts a portal in front of you which will grant a power up and this seems over-powered but the weapon power ups (missiles, mines and others that affect speed or controls in one way or another) tend to feel pretty weak against the AI (but, as you’d expect, they can absolutely scupper you whent he AI uses them).

This selection is kind of predictable, not particularly well considered and far from being exciting.  Mario Kart doesn’t enjoy exclusivity when it comes to good kart racing power ups with Gripshift on the Xbox 360 actually doing it better in our opinion but VR Karts is miles off in terms of quality and design. 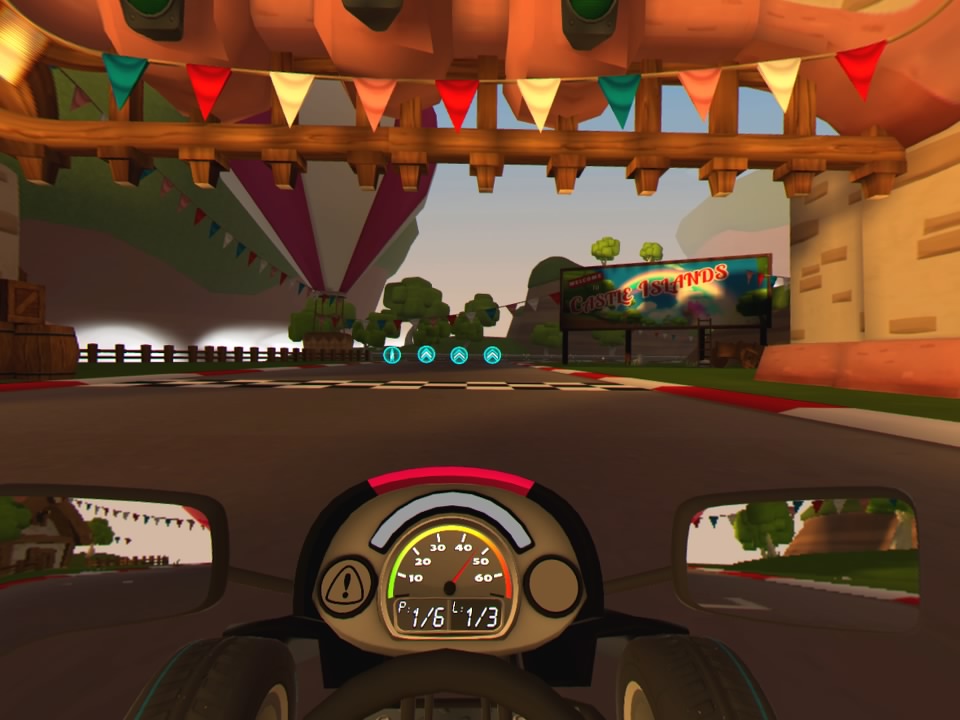 What VR Karts does do is the VR stuff, of course.  There is a real sense of being sat in a kart and the view does allow you to see what is going on around you while also giving you a reasonably good view of your wing mirrors.  The effect is reasonably powerful and welcome but, as is too often the case, we feel that the VR is there to mask and entirely obvious lack of creativity.  Take it out and this would be the most basic kart racer of the last ten years.

In the end, VR Karts is all too bland to recommend and comes with a shocking asking price of £29.99 which is a solid £26 too much (especially as the game has already done the rounds on all the other VR systems) and half of that will get you DriveClub VR which comes with a heap of content.

VR Karts
4 Overall
Pros
+ The VR works well
+ Races can be enjoyably tense
+ Has online play
Cons
- Steering feels stiff
- Very bland track design
- Extremely overpriced
Summary
VR has been around for a while now and just being in VR isn't enough. Like any other kart racer we want interesting levels, tight controls and fun power ups. VR Karts doesn't deliver any of that. The VR is welcome but without it, there would be literally no reason to own this.