I can’t quite imagine living in a small rural setting. They always look kind of devoid of life and I tend to miss my home comforts. The Prince of Landis, developed by one-man team Lorestrome, is an adventure game with a small slice of that life. Landis feels like one of those towns where everyone’s on first name terms and the setting does well to establish the problems and quirks of such a small community. 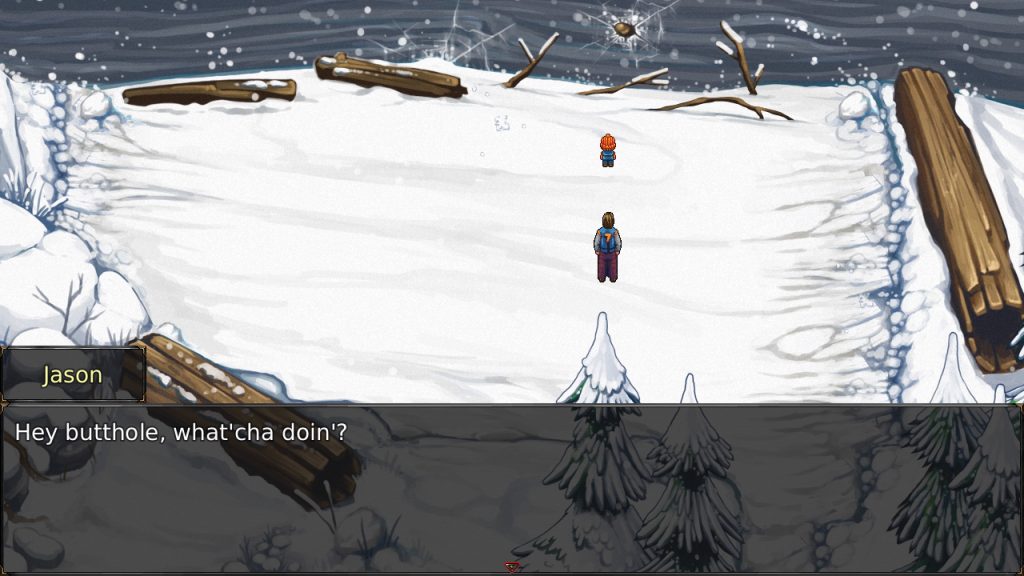 The Prince of Landis follows the story of Evan.  He’s a young boy in Landis, Oregon. It’s a small town with not much going on and he lives with his alcoholic father. He gets bullied at school and generally lives a dull childhood. There’s a sense of a close community with everyone knowing each other. Pretty quickly you know your father’s reputation and his hopes for you.

His alcoholism isn’t hugely overplayed, although the room full of bottles does establish his habit. He carries a tough image and you just aren’t that kind of kid. He’s not an abusive father but he is disappointed. That starts to change when an alien crash lands in their back yard. Only Evan is aware of it and The Guest quickly finds a use for the child. 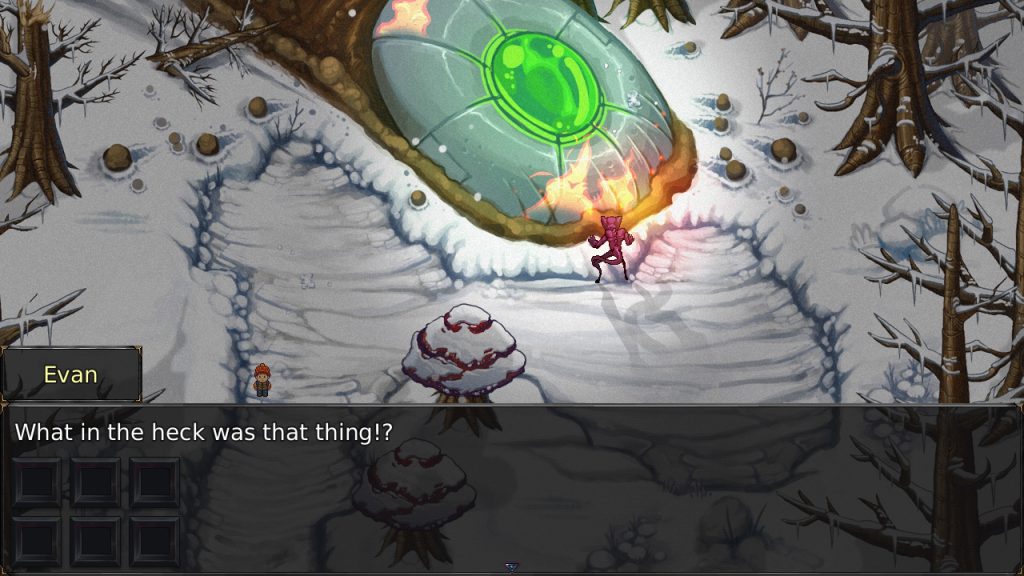 The Prince of Landis‘ gameplay is largely adventure-focused. From an overhead perspective, you scour the town for pieces to fix the visitor’s ship. He also requires regular feeding so finding living things to feast on becomes a priority. You have a small inventory to keep track of but the game and location is small enough that you’ll find everything pretty easily. There’s no bizarre moments of logic to this game and the steps you take to accomplish tasks are pretty straight-forward.

Exploring the town can be enjoyable. As I’ve said, the close-knit community really strikes a chord and the townsfolk have enough chatter to really populate the world. The adults are mostly kind to Evan whilst the bullies generally act like bullies would. They pick fights with our protagonist but it’s not constant torment. He has friends at school so, whilst he is having a rough time, the whole world isn’t out to get him.

It seems nicely written and, despite the short completion time, you get a lot of flavour from talking to the residents. The Guest, on the other hand, isn’t entirely friendly. I got the sense he was using Evan as a tool to get his ship back in order. Evan’s more than happy to oblige and, in return, The Guest does offer the youngster some life advice. It all leads to a conclusion that did seem to fit with some of the more sinister overtones of the alien visitor. It doesn’t quite break into horror, though. 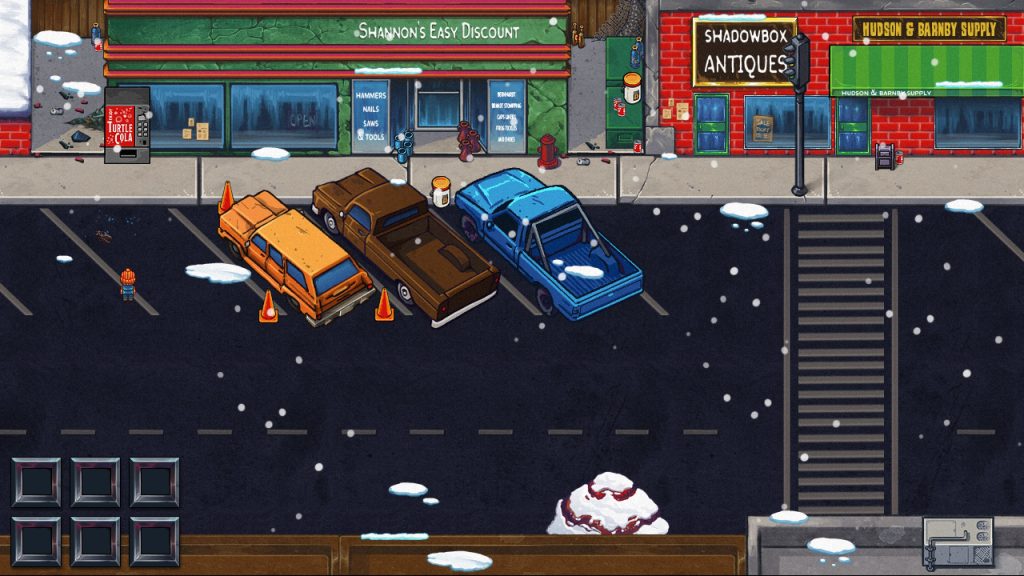 The actual gameplay seems fine enough. Items are simple to interact with and there’s rarely a time where your inventory feels cluttered. There’s a clear daily structure to it with Even helping The Guest on each step of the journey. They stand out fairly easy against the backgrounds and I didn’t find myself hunting through the pixels to find key stuff. There’s also nothing superfluous with everything having a use.

Objectives are pretty clear with The Guest’s requests being explicit. The town is small enough to give you ideas on where to start and I found myself spotting points of interest that ultimately became important later. It results in something that doesn’t really bog down and manages to flow nearly from one day to the next.

Presentation is largely retro with a pixel aesthetic that wouldn’t look out of place in a 16-bit RPG. When the UFO crashed down, I was getting some serious Earthbound vibes but the tone on offer is a lot more grounded. The characters have recognisably individual and fairly detailed. The Guest has an elegantly animated tail wag that always takes me by surprise.

The environments are equally intricate with the town draped in a constant snowy climate. There’s a frozen lake and plenty of trees on the outskirts that really help establish the town far away from the bigger cities. There’s a couple of shops and a school and they all have a decent amount of detail. Houses look lived in and the school has plenty of books and lessons on the chalkboard. 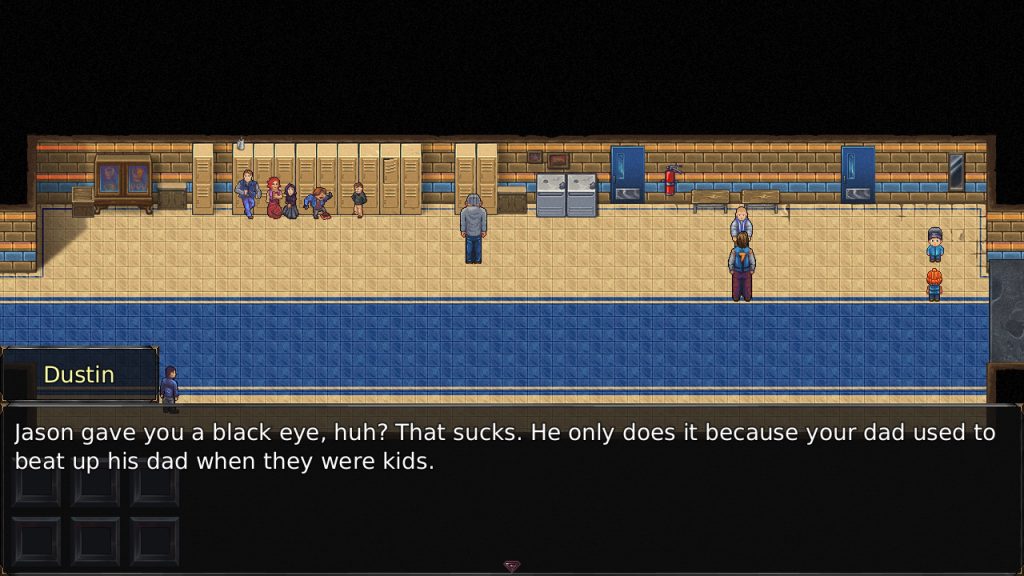 One thing that’s lacking is music. Maybe the silence plays into the isolation but you mostly just have the text scrawl for company. Only your encounters with the alien seem to imply some menace with a looming tone. I wish there was just a touch more because the time on the town can sound empty.

Overall, The Prince of Landis is a nice little tale that manages to do well despite not a lot of plot. I can empathise with Evan’s trials and tribulations in a rural setting and, despite the arrival of The Guest, the narrative stayed fairly grounded. Visually, it’s detailed and the adventure game aspects are simple and rudimentary. It works decently together although there’s definitely times where it falls short.  I like I could see adventure game fans being turned off by it’s simplicity and brief nature.

The Prince of Landis
6 Overall
Pros
- A decent narrative, even if it's a little slim on plot.
- The environments are nicely detailed.
- The writing does well to convey the small town community.
- Well paced.
Cons
- The lack of music does rob the game of some atmosphere.
- Maybe too simplistic for some adventure game fans to enjoy.
- Fairly short with no immediate reason to replay.
Summary
The Prince of Landis manages to tell a neat little tale about a small boy growing up in rural Oregon. Whilst there's not a lot of plot to tell, the environmental details and conversations with the locals do manage to add some substance to the narrative. It feels fairly grounded and exploring the town for items doesn't feel overwhelming or tricky. I do wish more effort was made with the soundtrack. Whilst silence was probably intended to hammer home the isolation, it does feel like the game is lacking in it's absence. It's not stellar in its presentation but it mostly delivers.

One thought on “The Prince of Landis – PS5 Review”