Here’s something we don’t get to say very often. From Chilean developer Ace Team, we have the survival adventure game The Eternal Cylinder. Hailing from Santiago, you’ve probably never heard of them but you may have heard of their previous output in terms of the Zeno Clash and Rock of Ages games, the former being on XBLA.

The titular cylinder then, it’s the biggest threat to your wellbeing, survival and continued existence. Inexorably rolling towards you and all the flora and fauna that inhabit the nameless planet. The Eternal Cylinder opens with a voiceover from your de-facto companion during your playthrough.

You have a narrator you see, the dulcet tones of an NZ actor called Peter Hayden. He does a great job throughout, working well with the script he’s given. Sometimes it’s utter nonsense, but other times it has you in a reflective state about the nature of your journey. 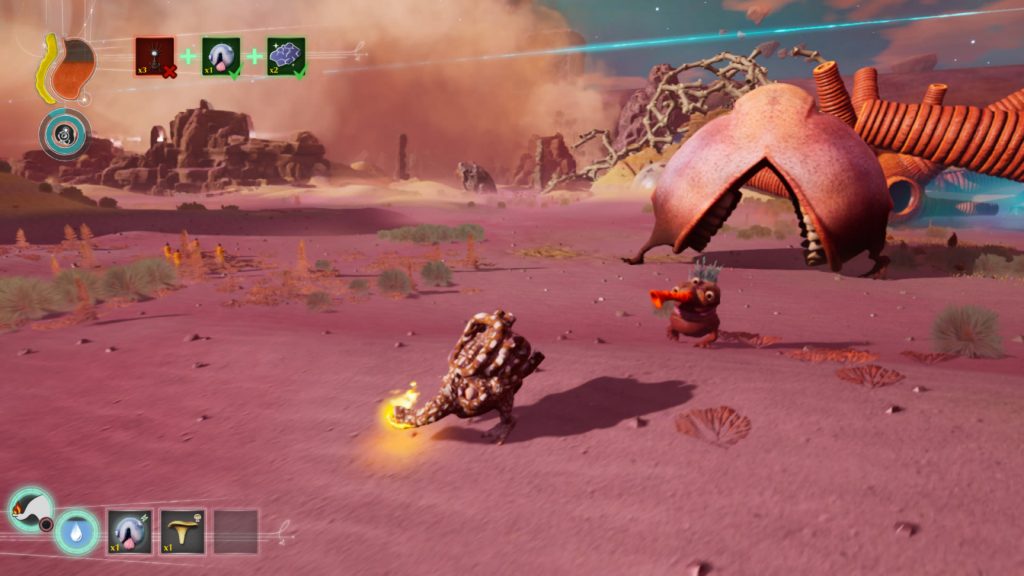 Anyway, after a short interlude you’re introduced to a Trebhum. For want of a better description, it’s an ambulatory pair of bagpipes that can both suck and blow. The core mechanic here is the sucking up of items that can cause your Trebhum to mutate into a different form on the talent tree. For example, sucking up and then eating a particular fish gives you webbed feet that allows you to swim better.

The core gameplay loop here is generally meet a minor objective such as finding a new mutation or another objective. Upon meeting this criteria the otherwise inpenetrable barrier becomes permeable and you can make a break for the next tower before the cylinder catches you.

We got horribly bogged down at one point, managing to trigger the game over state without fail. You see, you have to pass through the portal on a tower to stop the cylinder rolling. Bypassing a tower won’t do. For whatever reason we couldn’t see the wood for the trees. 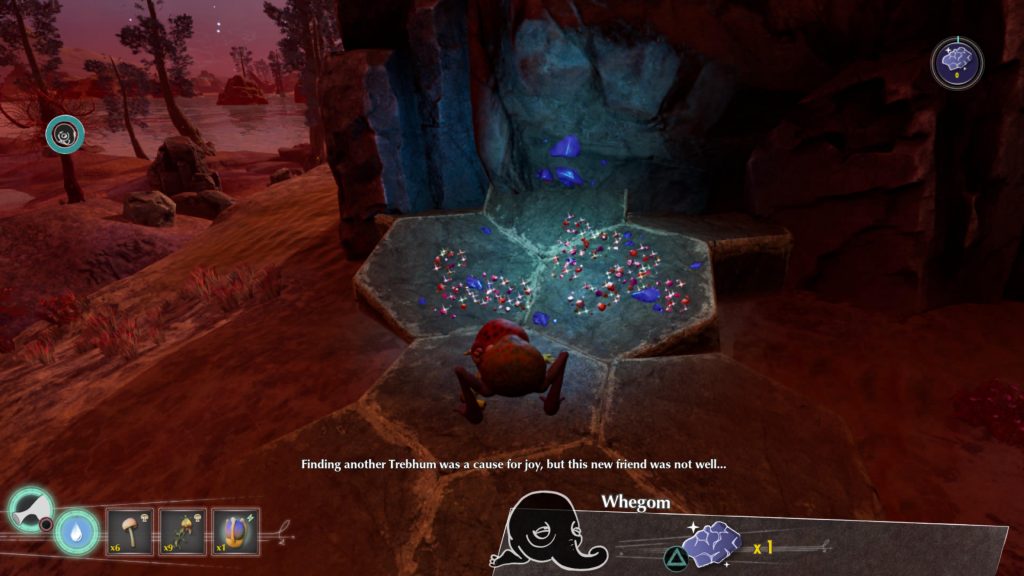 Some mutations are far more useful than others, the mixer for example gives you the ability to fight back against the fauna that wants to eat you. Similarly, the mineral processor is also very useful in that it produces the jewels that are the de-facto currency here. This currency lets you unlock upgrades in shrines as well as resurrecting your fellow Trebhum who’ve died.

The most essential mutation is, in effect, detective vision as you’d find in Rocksteady’s Barkham games. It’s also tied into a trophy in which you have to scan and identify every single creature. This proves irksome though, as some creatures and enemies will only show up in particular levels. If you’ve not got the ability to scan them, you’re out of luck. The scanner is all the more essential in terms of a few trophies mentioning interactions with various creatures by name, yet their names only become available once they’re scanned. Not too helpful. 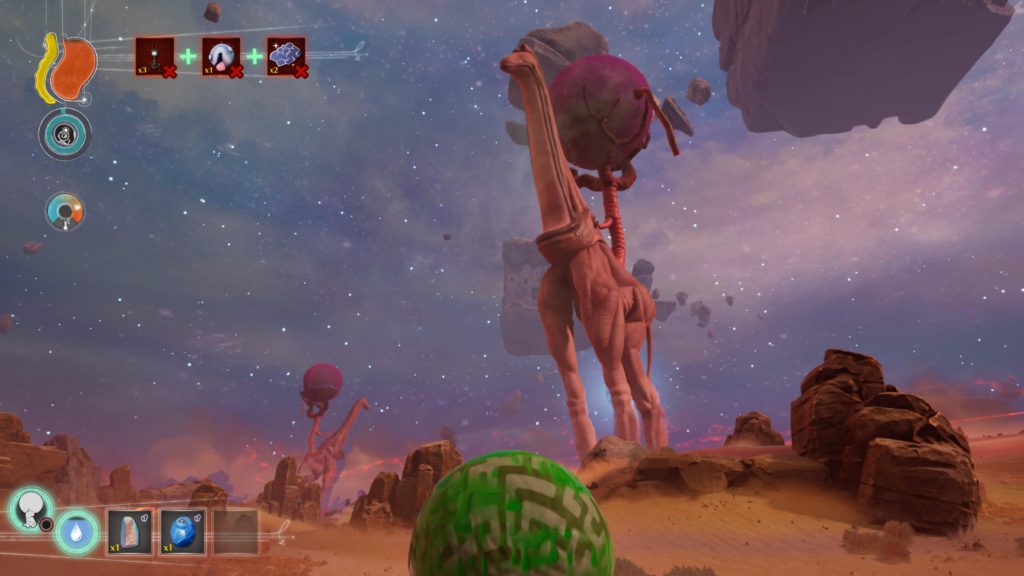 Once you have scanned them though, there’s a detailed in-game encyclopaedia that expands greatly on the quirks and traits of the fauna you encounter. Amusingly though, in one case the only real distinction between one early predator and its winter variant is the fact it’s furry and otherwise identical.

You can helpfully switch on a few gameplay aids, the most useful being that enemies won’t aggro on your fellow Trebhum when they’re not under your direct control. You can switch off survival mechanics too, but in doing so, you’ll probably find the game that bit too easy.

You’ll come upon shrines with elder Trebhum willing to impart their knowledge to you, but due to a quirk of UI design, you’ll not actually be shown in the talent tree as to which skill the elder is referring to. If you collect the pre-requisites you’ll be able to unlock the mutation permanently without needing the reagents to mutate. This will also allow you to backtrack from one mutation too without needing to revert to a prior save. 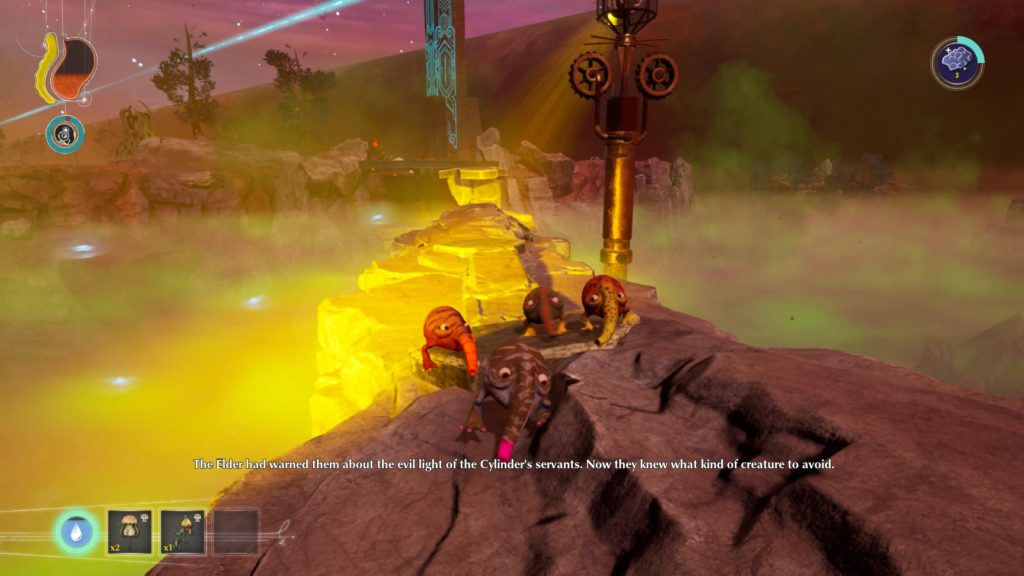 You see, not all mutations play nice with others. They don’t co-exist under all circumstances. We can understand mixer not working with another processing mutation as they will conflict in terms of their use of items you suck up, but it’d be nice to be told that you’re about to lose your scanner for example. Perhaps you are, but the UI doesn’t make it too clear.

and turning yourself into a ball that can escape all but the swiftest baddie. After a while though, you’ll encounter so-called Servants of the Cylinder who shine lights that arbitrarily make your Trebhum lose their abilities. For the most part, this is merely annoying. But when you’re reliant on a particular mutation, it definitely comes over a little bit punitive. 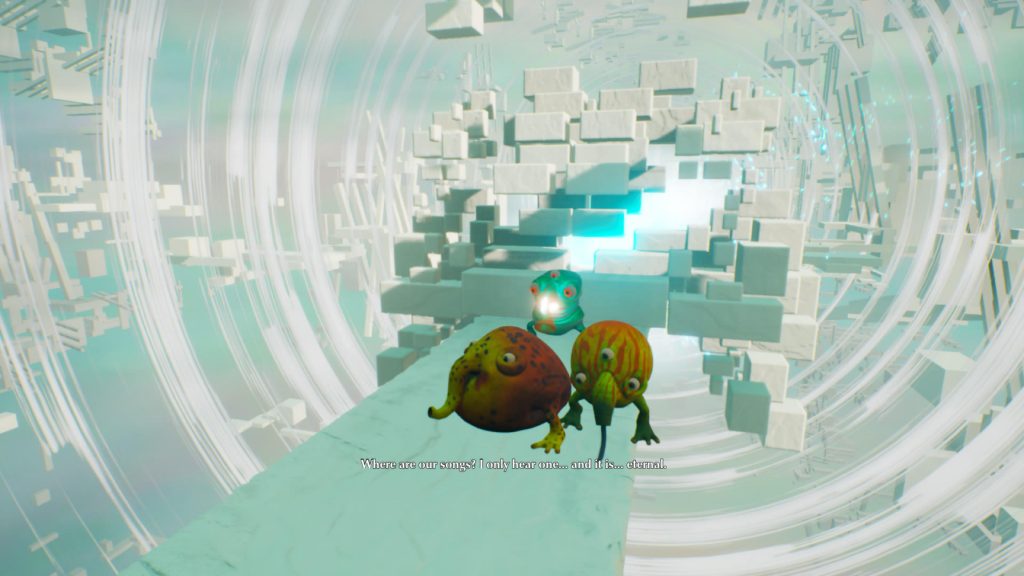 If you plough ahead and just concentrate on the story beats, The Eternal Cylinder will be a brief excursion of a few hours for you, but if you genuinely take the time to explore and seek out all the mutations here, there’s a lot more besides. Superficially you might write this off as a Spore-a-like but that’d be selling it short.

We’ve already mentioned a few little bugbears, but what we’d really have liked is the ability to freely explore different biomes to (literally) hoover up all the remaining mutations and scan the few creatures we missed. But instead, the last autosave we had throws us in at the start of the final climactic boss fight. Maybe even a New Game+ would be plausible, as it wouldn’t particularly break the story otherwise.  Instead we’ll have to resort to picking out chapters to hopefully scratch that completionist itch. Occasionally, you’ll find yourself abducted by flying predators. Fair enough, but when they take you outside the boundaries of the trigger point for the cylinder to start rolling, they can feel like absolute bastards. 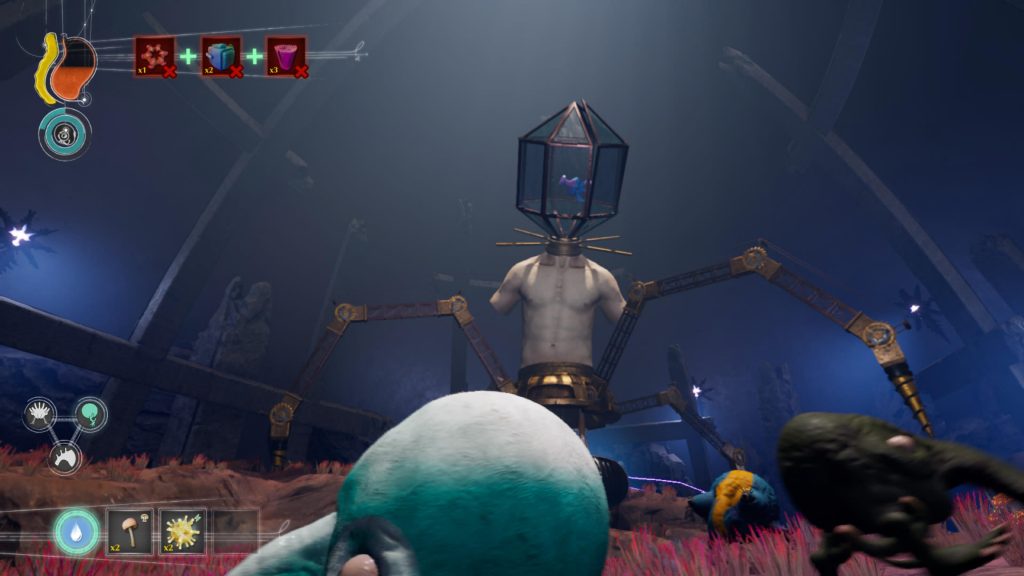 The story is largely nonsense but with a firm pinch of allegory thrown into the mix. You don’t have to imagine too hard to see this as a parable for the modern age, the cylinder symbolising the inexorable march of progress at any cost. Ultimately it means well and your man the narrator does a great job in earnestly imparting the plot.

As the narrator says at the outset, “This is not the story of the One, the One encompasses too much, crushing everything and making it the same.  No, this is the story of the Many, who are blessed with difference and rich in strangeness.” Be the Many, embrace the slightly baffling but wholly charming and bonkers journey that is The Eternal Cylinder.

The Eternal Cylinder
8 Overall
Pros
+ Charmingly designed protagonists
+ Engaging core gameplay loop
+ Mutations are well thought out
+ The narrator is a highlight
Cons
- Losing some mutations can feel harsh
- The UI in the skill tree can be a mess
- Could do with a New Game+  or a collectible tracker at the very least
- Some enemies are straight pricks
Summary
The Eternal Cylinder is a quirky yet ultimately charming survival game with a puzzle slant. It lapses into daftness occasionally, but the earnest narration gives it a gravitas it might be lacking otherwise. Get to it.