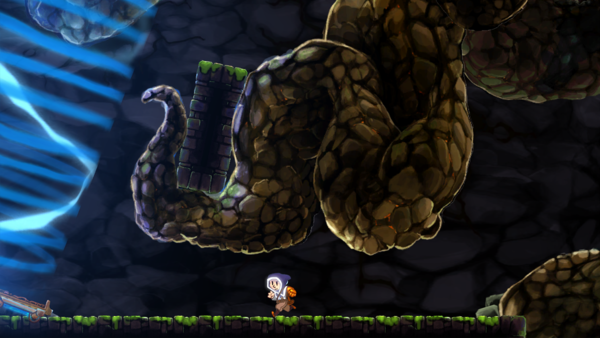 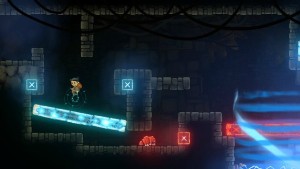 The central mechanic to Teslagrad is quite simple. Your special power is the ability to manipulate magnetic fields, both positive and negative. You need to use this ability to climb the tower and conquer the puzzles that lay along your path. Most puzzles can be easily understood with one sentence, two likewise colours will repel each other while the opposite colours will attract. What makes this interesting is how you use this ability for traversal. At first you get the ability to punch objects with one charge and then that object may be attracted or repelled by another object which has been lit up by default. Other times you may have to find a certain plant which is charged with one of the magnetic fields, upon touching this you are propelled by a tower of magnetism that sends you flying upwards or across entire rooms. Then even later in the game where you pick up the ability to generate a magnetic shield around yourself you will find yourself floating through gauntlets of fatal electricity and magnetic blocks. As I stated before, it’s quite simple to understand and the chief source of intrigue in Teslagrad is navigating through the room safely while utilising these abilities.

For an indie game about feelings I’m not surprised that was the story was so basic. You play as a boy that has been smuggled away from a king that has a serious affliction to people with magnet powers. Your character evades capture from a Russian looking fellow who chases you into a towering building and you must now escape this. That is basically it and there is no audible dialogue that explains this with the story being told through gestures, grunts and the odd puppet show that gives the player more exposition. This is fine and all but when a story is left as a framing device as opposed to a narrative there is nothing to really drive you on throughout. The chief issue with this is down to direction, you will find yourself getting lost quite a lot, without even a hint of where the next objective is. You can call this encouraged exploration if you like, I call it an exercise in frustration and the main reason I wanted to play something else whenever I couldn’t find where to go. 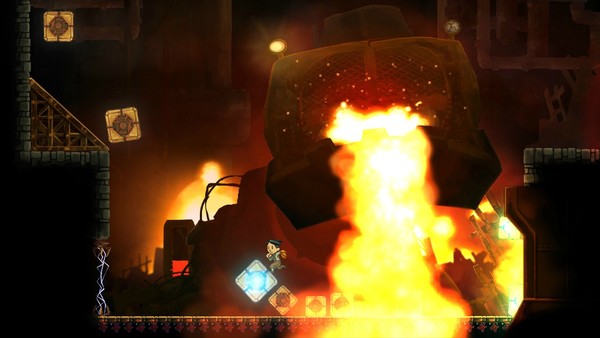 Navigation comes second place in frustration to the difficulty spikes. Throughout your climb in the tower you will encounter the odd boss battle. At first I marvelled at the inventiveness of these as they are genuinely quite unique. One of these battles was against a bird like machine with a cage for a body, part of the battle included blink dashing into its chest and punching it from the inside with your magnetism power so that lightning will hit it. I really dug that, but when there were three to four more steps to take after doing this with each new addition to the routine costing a life to try it became quite tedious, a test of patience as you trial and error your way through what should have been an exciting and fun encounter. I get that a boss fight should be a test of what you have learnt over the course of the game until that point but coupled with a one hit death system it really does take its toll on the player. 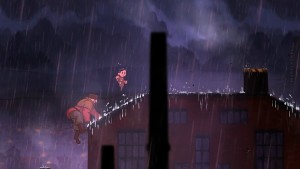 Speaking with frustration in mind I got particularly irritated by the controls at certain points. One of the major items that you pick up in the game is the Blink Boots. At the press of the square button you dash forward, passing through thin objects and enemies with relative ease. The problem with this ability is controlling it, as you can only shoot straight ahead this makes it irritating if you are trying to outrun an enemy on an upward incline, if you try to do this then the blink cancels out leaving you a sitting duck while it recharges. This and the annoyingly hit and miss collision detection go some way to ruin something that could have been quite smooth instead. This is a far cry from the ease of movement seen in other 2D platformer style titles of recent years and this inaccuracy is pretty much unacceptable, especially when you die with only one hit.

The graphics are smooth and inviting, featuring visuals that echo Braid with a slightly more simplistic tone. Hard black lines surround the colourful characters and each wing of the tower has its own presence to it that truly makes them unique and the characters and bosses you meet across the way fit seamlessly into their own respective backgrounds, very few games can boast a visual synergy like this. It’s just a shame that about everything else is quite bare. It’s a tossup between a let-down or a revelation whenever I consider it. On one hand I enjoyed its minimalistic charm, it allowed me to focus on the progressively gruelling puzzles while on the other it felt that the developers could have done more to make the game slightly more intuitive by fixing the nuances with control or just making the game slightly more accessible.

Teslagrad
7 Overall
Pros
+ Beautiful graphics, environments and characters really stand out + Simple mechanics which are fun to learn and master + Level design is excellent
Cons
- Irritatingly inaccurate controls at times - Can be hard to find out where to go next - Frustrating boss battles with one hit kill mechanics
Summary
Teslagrad feels like there are genuinely good intentions, particular in it's level design and puzzle mechanics. Apart from this and the looks it just doesn't quite gel together. It is a good game and you should try it at some point for its genuine inventiveness but I find it hard to recommend at it's full price point.