Tamiku is the latest Ratalaika title and is a familiar mix of retro visuals and gameplay and easy to achieve trophies.  It comes by way of Josyan Games, the solo developer who also brought us Zeroptian Invasion which was a very basic Space Invaders clone that did its best to feel like an old arcade game but didn’t do a great job.

This game is similar in some ways.  It has the grid boot up screen that old coin-ops also had and it offers an option to play with scanlines on to further replicate that arcade experience but this is quite different to Zeroptian Invasion in that it is a bit more original.  Well, we say original but the game does borrow from a few classics but it isn’t a direct clone of any of them. 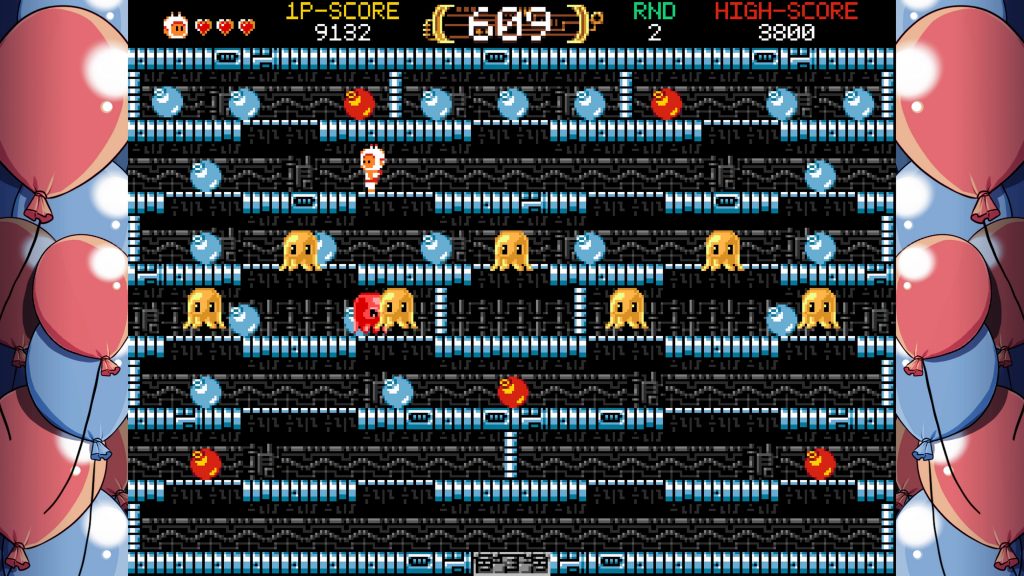 So, this is a 2D one-screen platformer of sorts.  You play as Tamiku, an alien who likes to pop balloons so much that it led to him destroying his home planet.  Yep, we don’t get that either.  But anyway, he’s here now and faced with eight screens of balloon-popping action.

Each level has an arrangement of static balloons.  Blue ones pop on contact, red ones require you to hammer the

button for a second or two.

is your jump button but while we said it is a platformer, it kind of isn’t as jumping just takes you up to the next row on the screen.  You can’t jump to other platforms (there are none) or over enemies or anything like that.  If anything this game is more of a cross between Pac-Man‘s collecting and avoiding action and the home sequels to Bomb Jack (the shitty ones that removed the flying).  It also reminds us of the ancient Jumping Jack. 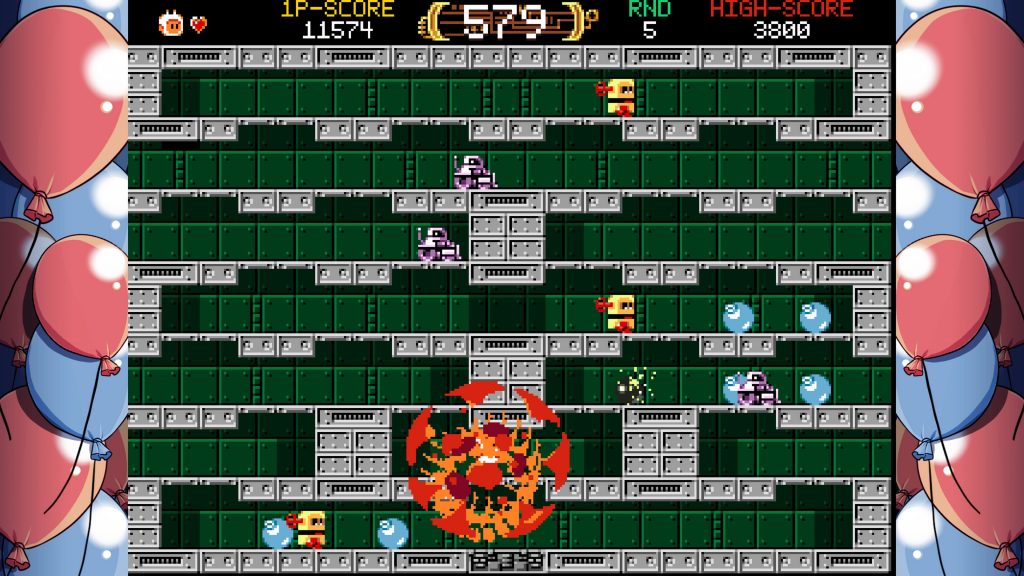 The gameplay is pretty straightforward.  You collect the balloons and avoid the enemies.  Each new screen gives you a different threat to worry about and this does keep things interesting.  The game is also pretty challenging especially when the on-screen timer hits zero (which it does very quickly) at which point the enemies all get hyped up a bit and move faster.  You’ve got no defence against them and so you just have to keep moving, which gets trickier when later levels start adding barriers and the like.

It’s actually quite well considered.  The action is fast and taxing and the variation is welcome.  Also, we like the fact that this isn’t a direct rip-off of an old classic.  It doesn’t add many new ideas but it kind of works in an ‘undiscovered MAME ROM’ kind of a way.  Indeed, if this was an old arcade game, you’d happily give it 10-20 minutes of your time but it would never be heralded as some sort of cult classic.  However, the levels don’t feel amazingly well designed.  When you compare it to Bubble Bobble or Rainbow Islands, there isn’t a sense that these levels have playtested to absolute perfection.  They do a job, and it’s an okay job, but it doesn’t foster any real addictiveness or need to play it again just for fun.

You begin the game with three lives and these can be cleared out pretty quickly.  The game lets you continue from whatever stage you reach, albeit resetting your score.  There aren’t any real reasons to worry about score though as the offline-only leaderboards are easily topped with just a minute or two of play.  The game’s trophies just require you to beat all eight stages after which the game loops and is a bit harder. 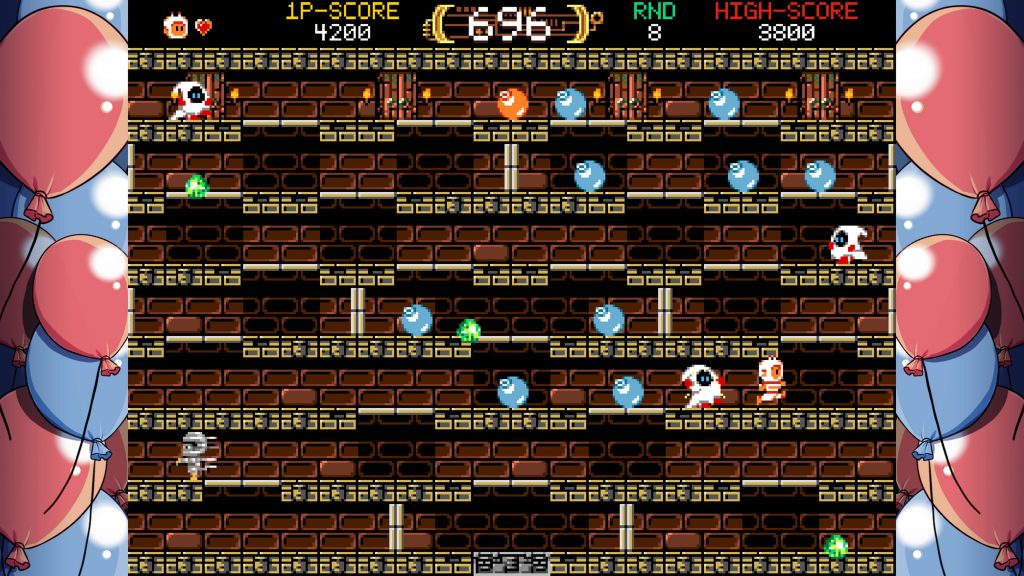 In terms of presentation, the game is a mixed bag.  While the visuals are a let down, looking more like a mid-way step between the NES and SNES rather than an authentic coin-op look, the music is actually really good and feels like it would belong in an old arcade game.  Beyond that, the scanlines option is just an on/off thing with no options for screen smoothing, blur or anything else like that.   The interface is a bit weird though.  The Options button gets you into menus but all four face buttons do the same thing when you are in there, which is initially confusing but no big deal.

As with many Ratalaika releases, this is a quick one and done kind of affair and even an old arcade fan like me didn’t really get much from it but for the half an hour it took me to platinum it, I didn’t hate it.  But there’s nothing here that makes you want to go back and master it and there’s nothing in the presentation that makes you want to just enjoy it as a content tourist.  But as a simple riff on a few arcade classics, Tamiku has just enough going for it to justify the very cheap asking price.

Tamiku
4 Overall
Pros
+ Playable enough
+ Has some short term challenge
+ Doesn't directly rip off any of its inspirations
+ Authentic arcade style music
+ Cheap
Cons
- Over very quickly
- Visuals aren't very attractive
- Offline leaderboards don't encourage replaying
Summary
Tamiku borrows heavily from a few arcade classics but manages to do its own thing and that is admirable but this simple platformer is over pretty quickly. Not bad for the price but not a game that'll last in the memory.