There’s a lot you can infer from a title. At Sundown: Shots in the Dark is an apt descriptor of Mild Beast Games’ multiplayer arena shooter with a delightful gimmick. You see party games like this come and go but, with this one offering a level-based progression and plenty of options, this one might stand the test of time better than most. 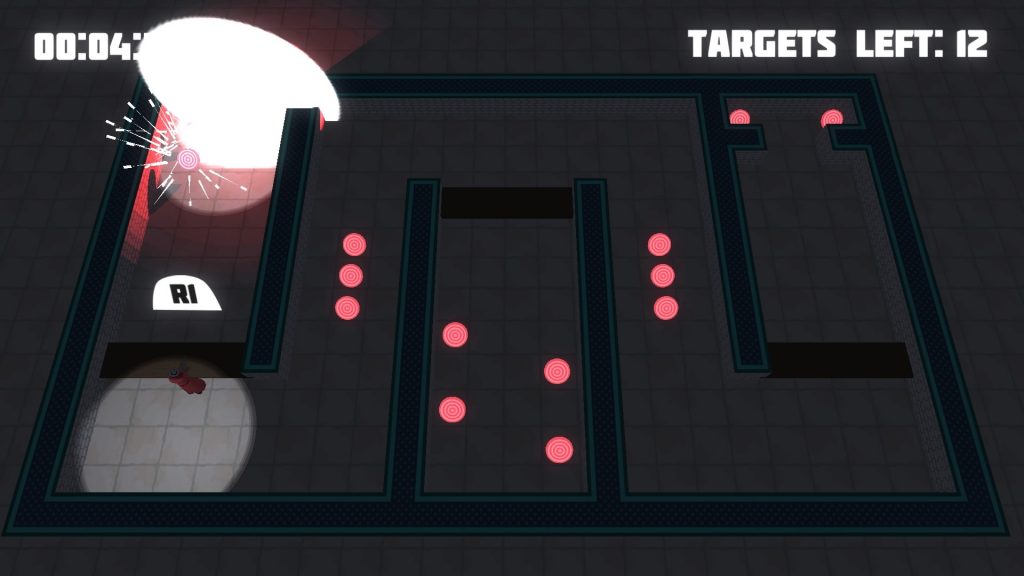 The twist to At Sundown: Shots in the Dark is that visibility takes centre stage. Most stages play with darkness and light. Player positions are mostly hidden so your memory and anticipation is tested in some interesting ways. Of course, there’s cues you can spot to see players. Sprinting and dodging produces tell-tale trails and shooting always gives you away.

It’s this game of hide and seek which makes combat fascinating. Party games need to be simple to understand but have a hook to make people keep coming back. With this combination of frantic shooting, using light to your advantage and quick rounds make for a blistering pace. Some of the encounters remind me of Hotline Miami‘s high-risk gameplay. Everyone is fragile but there’s a mobility that helps you escape situations. 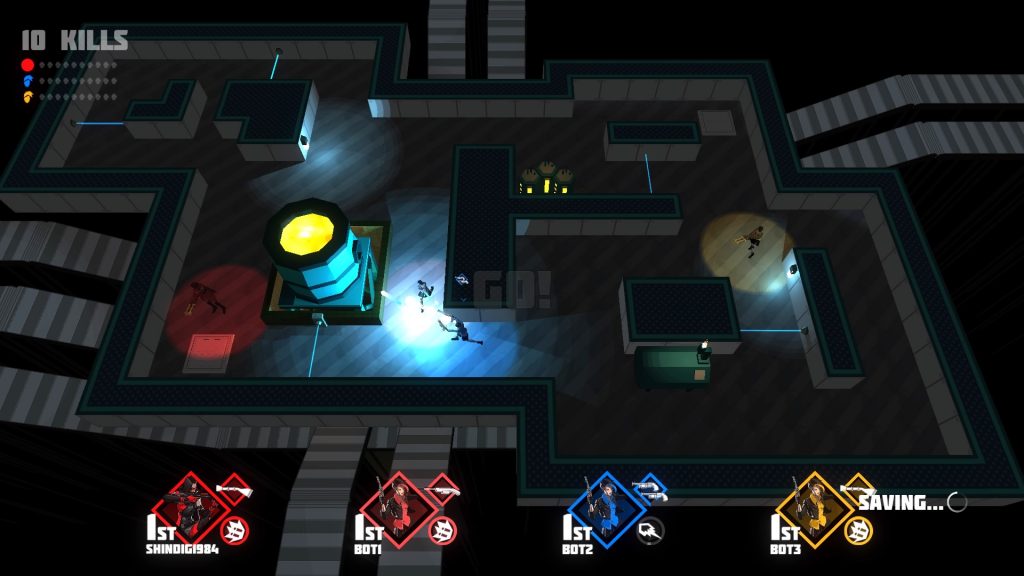 There’s plenty of weaponry to choose and can switch them up before a match or between deaths. There’s 11 in total ranging from conventional firearms like revolvers and machine guns to umbrellas, rivetguns and swords. Each of them operate differently with varying ranges, clip sizes and firing rates. They also have their own alternative firing types which act like special abilities. Some spray bullets in every direction and others lay down explosives a normal bullet can trigger. There’s a variety that allow players to experiment with situations.

Stages vary too with some offering more light than others. I do find the stage tends to imply how easy it might be to keep track of yourself. The mansion strikes me as the darkest area with tight corridors and very little sources of light to get your bearings. The reactor features environmental hazards with pools of waste lighting up players like moving targets.

There’s a handful of game modes to play with as well. The usual deathmatch is disposable fun. It can be played as teams but the objective remains obvious to grasp. Chasing kills to be the first to ten results in short, sharp rounds that have just enough room to swing back and forth. It’s At Sundown: Shots in the Dark at it’s most distilled and is enjoyable to just plough through round after round. King of the Hill and Capture the Flag deliver more objective-based games with control being favoured more than outright murder. 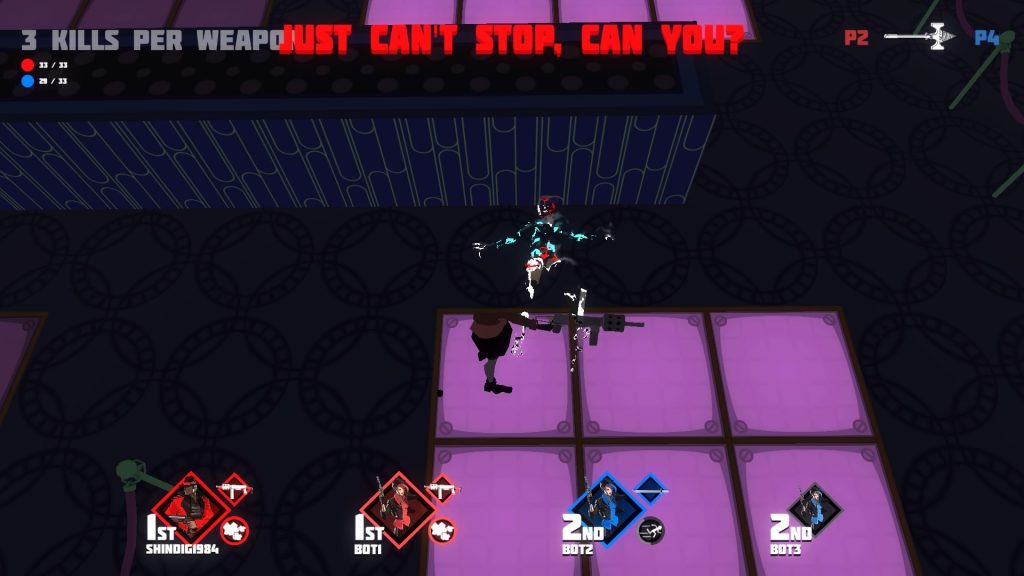 All these game modes, weaponry and arenas are unlockable by an experience system which might initially seem like a grind. You unlock new things at each level and each level takes 500 experience points to unlock. In pure time, you’ll probably devote four hours to unlock everything. I think that’s a fair investment considering you might put an hour or so to a session. I marathoned it for review purposes but I can’t expect anybody else to play in that manner. It’s designed to tide you over and, when party games can fall out and back into favour, giving something to work towards can maintain a player’s interest for longer.

There’s a nice presentation on show. Arenas are colourful enough, aside from the dank Mansion. Gunshots nicely pierce the darkness with sprint and dodge trails adding more to punctuate a dimly lit environment. Kills have a flourish to them with the final one getting special attention. An announcer happily comments on kills, streaks and genuinely does a good job at keeping you up to speed. It fits with the action-packed matches and doesn’t seem to get old. Music could be better with just a couple of forgettable tracks on offer. It’s a chilled, relaxing score but don’t hold long in the memory. 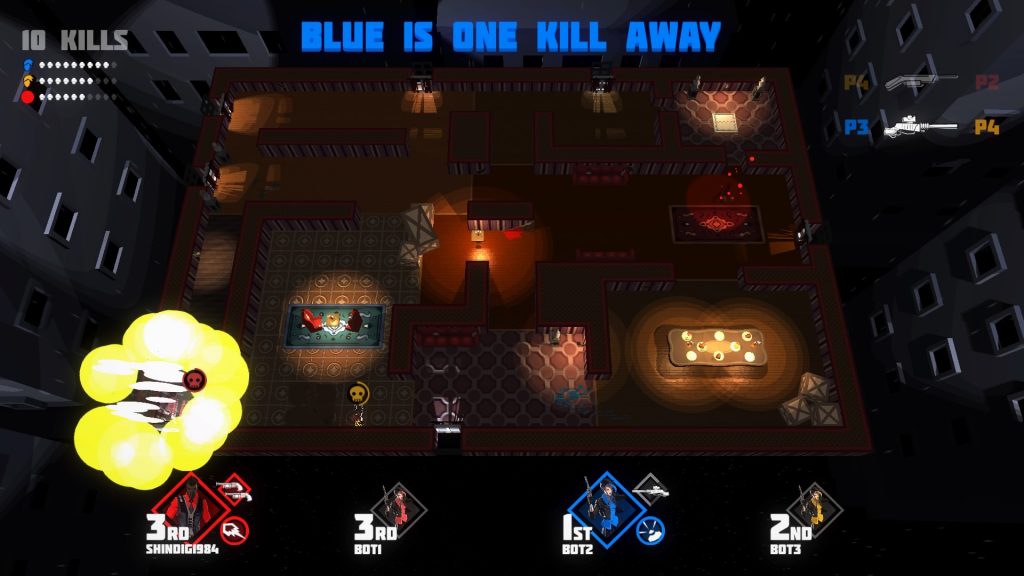 Other than that, I have very few complaints. There’s maybe a lack of variety in characters with just the four on offer. That said, all they offer is a cosmetic change and the camera isn’t close enough for that to really make a difference. I’ll reiterate losing track of yourself in the darker levels can lead to some frustration. Challenges unlock with new weapons but they boil down to timed shooting galleries that act as tutorials rather than a true test of skill.

There is multiplayer options that cover both online and offline parties. I’m really struggling to find games at launch so bot matches and local play has had to sustain me through writing this review. There’s enough game options and variants to make At Sundown: Shots in the Dark a compelling online battle but it seems the community needs to gain some traction. Still, what’s here is an entertaining party game with a lot of options to tinker with.

At Sundown: Shots in the Dark
7 Overall
Pros
+ Fast and chaotic combat.
+ Plenty of weapon variety.
+ Customisable game modes.
+ Colourful environments that make good use of light and dark.
Cons
- The Mansion stage seems tricky to navigate.
- Online lobbies seem barren at this early stage.
- Tying new stages and weaponry to progression might be off-putting.
Summary
At Sundown: Shots in the Dark's fast, frenetic gameplay provides an enjoyable title with plenty of variation. Whilst the progression might turn off players who want the whole toy box, the levelling treadmill doesn't drag for as long as you'd imagine. There's plenty to work with from new weapons, game modes and variants. It's a shame you'll mostly be playing against bots or local opposition until an online community begins to grow.